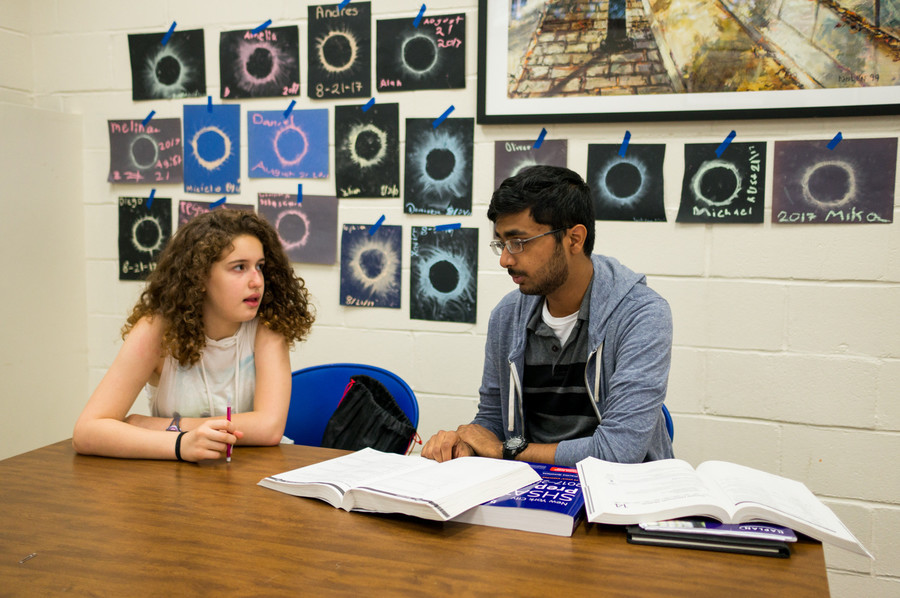 Abdullah Abid spends his classroom time not at a school in the Bronx, but instead at an elite specialized institution, Stuyvesant High School, off Chambers Street in lower Manhattan.

And all Abid wants now are more students from the Bronx heading to schools just like Stuyvesant.

For the past eight weeks, the P.S./M.S. 95 Sheila Mencher alum has worked as a volunteer tutor for the New York Public Library’s pilot program StuyPrep at the Library. Organized by his school and offered over the summer at the Spuyten Duyvil library, Abid offers free preparation for the specialized high school admissions test, used by students seeking to attend one of the city’s eight specialized high schools like Stuyvesant, as well as, more locally, the Bronx High School of Science and the High School of American Studies at Lehman College.

The program is a modified version of the one organized by Stuyvesant alumni at the school itself, designed to help students living in underrepresented neighborhoods find their way to these schools that are considered some of top high schools academically in the city.

“I really wanted to give back – especially in the Bronx,” Abid said. “There’s not that many kids who go to specialized high schools at all. It’s very sad when I go to Stuyvesant and there’s … 20 people who are from the Bronx.”

Stuyvesant, according to the city’s education department, has more than 3,300 students.

“I just like helping and seeing children grow from someone who did not have that much of a clue … to being someone that is doing really well now,” Abid said.

Volunteering as a tutor also was a way for him to see how much he’s progressed academically since that first exam nearly five years ago where, initially, he struggled to answer the questions.

And his work had made an impact.

“I was trying to do the books on my own and found it very difficult to do myself,” said Sophia Kereselize, an incoming eighth-grader at Riverdale/Kingsbridge Academy who wants to attend Bronx Science. “I thought it would be more helpful to actually have a teacher explain the materials.”

Kereselize is one of two students who regularly attends the weekly program at Spuyten Duyvil. It’s structured like a tutoring session, with plenty of opportunity to ask questions.

In addition to the library’s eight sessions, Kereselize also will take an SHSAT prep course through The Princeton Review in the fall, all for an exam she’s scheduled to take in late October.

Having the informal session made Kereselize feel more confident about the exam while improving her math and language arts skills, she said.

“It’s easier and more convenient to come to the library,” Kereselize said. “It’s also a free class, and that’s even better. It’s good to be taught by someone who experienced and taken the test before.”

Abid’s own prep came thanks to his older sister, Ammar, now a graduate of Brooklyn Technical High School. His work started when he was in sixth grade, helped by Horace Mann School’s Summer on the Hill program, which offered free SHSAT prep.

Even now, Abid is multitasking. Outside of StuyPrep, he’s taking a math and a robotics course at City College. This fall, he’ll start applying to colleges, and is considering schools like Cornell University in Ithaca and Rensselaer Polytechnic Institute in Troy.

Abid’s work helping his peers is no surprise to Michael Halpern, his former junior high science teacher at Sheila Mencher.

“Abdullah has always been one to volunteer and help students get ahead,” Halpern said. “As an eighth-grade student, he always was moving around my science classroom working with students who had difficulty understanding the information. He always stood out as inquisitive as well as an excellent student with a fantastic sense of humor.

“He would ask questions sometimes so deep that I had to look up the questions.”

Without programs like StuyPrep, SHSAT tutoring can be extremely expensive, said Michael Rios, a senior librarian at the 53rd Street branch in Manhattan who also is a Stuyvesant grad. StuyPrep was offered at nine library branches, including the West 235th Street location of the Spuyten Duyvil branch.

“With this program, we can offer it for free, engage high school students, and keep students motivated to study during the summer,” he said. “It’s all amazing.”

Rios launched the pilot program through the library’s Innovation Project, funded through a $2,600 grant from the Revson Foundation. Rios debuted the program during the summer so students would “have more time to devote to the test without the added pressure of school and coursework,” he said. The library provides the prep materials and practice questions.

Of the nearly 28,000 students who took the SHSAT exam, nearly 24 percent were Latino, 21 percent were black, and less than 1 percent were Native American, according to the city’s education department.

That’s a big difference compared to the city’s public school population where nearly 70 percent are students of color.

For Abid, it just boils down to helping more students from his borough.