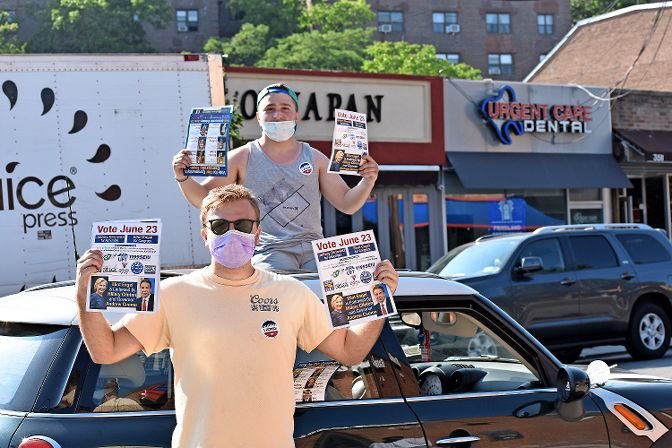 Eitan Weinsteiner and Lenny Faiwiszewski, both volunteering for U.S. Rep. Eliot Engel, set up shop on Johnson Avenue for the primary election on June 23. College students who live in Riverdale, the two said Engel had a long history of doing good in the district, and said they had talked to many Engel supporters throughout the day.
KIRSTYN BRENDLEN 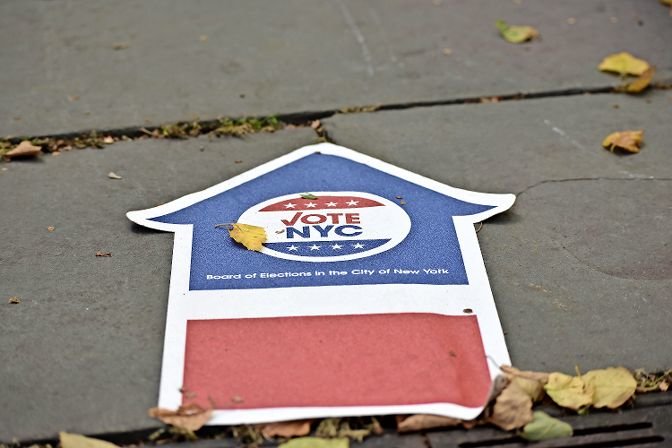 Voters followed the arrows to cast their ballot at the Arbor on Henry Hudson Parkway, where they stood at six-foot intervals while waiting to vote in-person. Shifting poll sites, combined with struggles to get absentee ballots sent out in time and voter anxiety over COVID-19 made June's primary one to remember.
KIRSTYN BRENDLEN 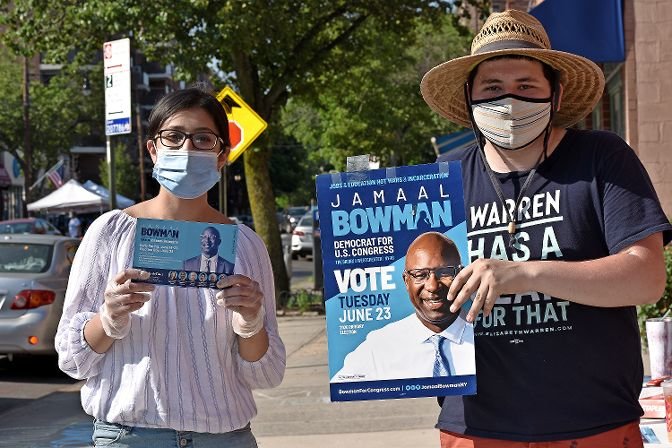 Raphy Jacobson teamed up with other volunteers supporting congressional candidate Jamaal Bowman just across the sidewalk from a camp of volunteers backing the incumbent Jamaal Bowman on Johnson Avenue. There they handed out campaign literature and water bottles to passers-by. Jaconson met Bowman at a campaign event and liked his energy and engagement, he said, and feels the district is ready for change.
KIRSTYN BRENDLEN
Previous Next
By KIRSTYN BRENDLEN

The months and weeks leading up to New York’s Democratic primaries were filled with twists and turns as state officials struggled to find balance between keeping New Yorkers safe from the coronavirus pandemic and not hampering turnout in a critical summer political event.

Voters held on tight as elections were rescheduled, canceled and reinstated, and as a huge push for more absentee ballots creating a mountain of applications for officials to sort through.

For those living in parts of the Bronx and Westchester County covered by New York’s 16th Congressional District, there was another twist. In the weeks before the primary, the race between 31-year incumbent Eliot Engel and insurgent challenger Jamaal Bowman started to heat up, and news outlets across the country took notice.

While all eyes may have been on the race between Engel and Bowman, voters in the district were a little more concerned about getting their ballots counted. Dozens took to social media complaining they never received the absentee ballots they applied for, or that they did get them — except on primary day itself — a widespread issue that prompted Gov. Andrew Cuomo to allow ballots postmarked by the June 23 to be counted.

Gray and Alara Jennings shared some of the bumps in the road they hit while trying to cast their ballots as they made their way out of their polling place at P.S. 207 on Godwin Terrace.

“I had my absentee ballot sent to our house,” Gray said. “I should have had it in the mail two days ago — or Saturday, I guess — but I didn’t have it in the mail. I called this morning, and they said I could potentially just drop it off with the coordinator at the polling site. And so that’s what I did, and that went smoothly.”

But then again, New York is a state where primaries are closed — meaning only voters affiliated with a party can vote, even if the winner of that primary is expected to breeze through the general election.

“I kind of shot myself in the foot, because I can’t vote this time,” Alara said. “I thought I would vote for who I wanted to in the general, but I guess I’m still learning. Now that I’m a bit more aware, I’m going to do what I can to make sure that I can make my vote count in the general.”

Isabelle Alves, who had just voted at the Arbor apartments on Henry Hudson Parkway, said she felt the location had taken adequate precautions in response to the pandemic.

“Everybody followed the six feet, they handed us things to clean our hands,” she said. “I showed them my (voter registration) card, they put it in, very, very fast.”

Reports of voters not getting the entire ballot, receiving ballots in the wrong language, or poll workers failing to give voters both pages required of them, dotted social media. But everything had gone well for Alves.

There had been some issues with voting earlier in the day at the Arbor, said Nathaniel Stern and Tamar Cox-Rubien, volunteers with Bowman’s campaign who were stationed nearby at the corner of Arlington Avenue.

“Basically, people that are in the right location, it’s saying they’re in the wrong location, so they’re filling out affidavit ballots instead,” Stern said.

By late afternoon, though, most of the voters leaving the building said they had cast their votes without incident.

Cox-Rubien and Stern weren’t the only campaign volunteers hard at work on primary day. Just down the street, opposing camps supporting Engel and Bowman had popped up just feet from each other on Johnson Avenue.

“I moved to the United States about 10 years ago,” said Eitan Weinsteiner, who had been sitting on top of his car passing out information about Engel to passersby. “Since I’ve come, I’ve seen the impact that Eliot Engel has had on the community, community events, bringing money back into the neighborhood. Now that I’m 18, I’m extremely happy to be able to vote for Eliot Engel.”

Weinsteiner and fellow volunteer Lenny Faiwiszewski said they felt pretty good about pro-Engel feedback they’d been getting that afternoon.

Just steps away, Raphy Jacobson was discussing Bowman’s merits with a would-be voter.

“I met Jamaal Bowman, I would say a little over four months ago at an event,” Jacobson said. “I wasn’t paying that much attention to what was happening in this congressional race. But I met Jamaal, and he just wants to talk to everyone, and hear everyone’s perspective.”

Early returns, counted in the hours after polls closed at 9 p.m., showed Bowman picking up at around 65 percent of the vote — a number that didn’t change much as the night went on or in the week following, as more votes have been tallied, although his advantage was later reduced to about 60 percent.

While Engel has chosen to stay quiet until official tallies come out, the mood at Bowman’s election party in Yonkers on that primary night was high. In a fiery speech, the former Bronx middle school principal said he was going to make a difference by enacting change — and by a little disruption.