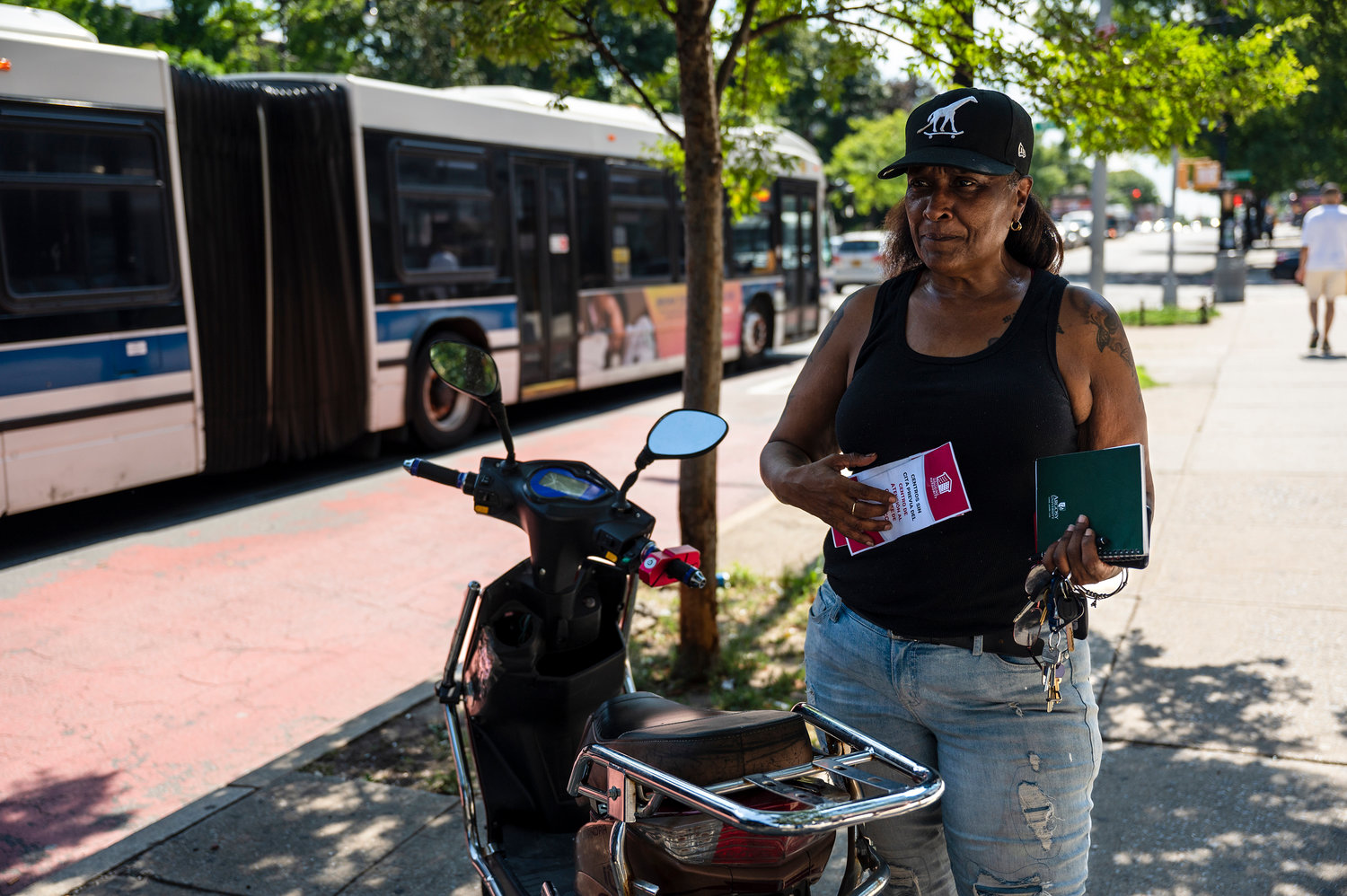 Rosario Ocasio leaves NYCHA’s Customer Contact Center in the Bronx Monday with instructions on how to schedule an appointment to address her Section 8 voucher issue.
Hiram Alejandro Durán 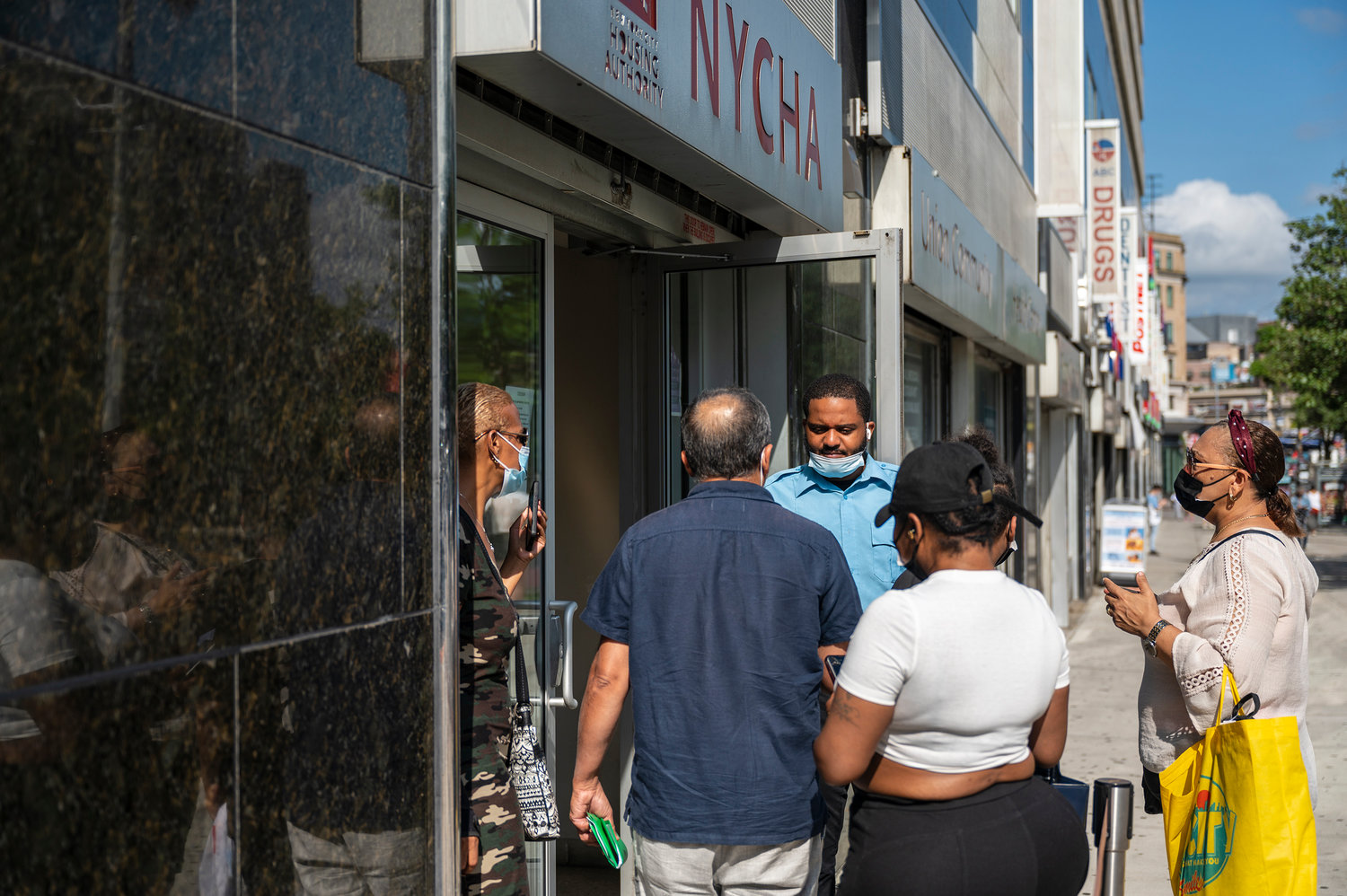 A security guard manages the line outside of NYCHA’s Customer Contact Center on Monday.
Hiram Alejandro Durán
Previous Next

I tell you, my heart dropped. I didn’t know what to do.”
ROSARIO OCASIO, Section 8 voucher holder
Support journalism

An orderly line formed at the corner of Fordham Plaza Monday morning outside the New York City Housing Authority’s Bronx office. A dozen or so families waited as the sidewalk began to bake in the sun. Then, at 8:00, a guard unlatched the door and poked out his head, allowing an icy gust of air to escape.

“Who here has an appointment?” he asked.

“They all bring me the letter, that same infamous letter,” explained Ray B., who’s been working the door at 478 East Fordham Road since April — and only gave the first initial of his last name.

“Everybody comes to me with the same letter, but you need an appointment to get in here.”

Along with one other location in Brooklyn, NYCHA’s Fordham office is the single point of access for residents in the city’s 277 public housing developments and housing choice voucher program known as Section 8.

Beginning in August 2021 and lasting until last March, a failure in the agency’s case management system caused thousands of tenants in the federal voucher program to be mislabeled as delinquent on their annual recertification. That is a mandatory packet of information voucher holders submit verifying their income, assets, and expenses.

The malfunction continued for eight months before NYCHA took action. It ultimately slotted more than a third of the agency’s Section 8 households for termination and sent out 32,000 notices informing them their rental assistance was about to end.

“I tell you, my heart dropped,” Rosario Ocasio, 53, said about receiving a termination notice in the mail late last summer after holding a voucher for 20 years. “I didn’t know what to do.”

The thought of losing it takes her back to the most difficult time in her life.

“Just to think about it, it gets me,” she said. “Once you know what it’s like to be homeless, you don’t ever want to be there again.”

When she was approved for the Section 8 program, Ocasio was living in a homeless shelter. She refuses to act like the world owes her something, she said.

“I’ve been in this apartment for 13 years. It’s the longest I’ve lived in an apartment. This was almost a year ago. I was going through it.”

A month later, Ocasio said, she learned from NYCHA that the termination notice was a mistake. “They got me going in circles,” she said.

Others have remained in limbo for much longer.

“It is the only way that they are able to afford their homes, especially with the ever-rising rents in New York City. So it’s really, really important to them. Some people are on fixed incomes. They are unlikely to find another place to live, and if a Section 8 voucher holder moves out, then they can lose their voucher.”

In March, lawyers at NYLAG became alarmed when they received 13 referrals for clients receiving Section 8 termination notices after they submitted their annual recertification.

“We started pulling the thread, and over a couple days we identified more than a hundred people who were facing this issue,” Luft said.

Many of those impacted were elderly. Many had limited English proficiency and poor access to technology.

“Despite all of that, they were trying to go to the customer contact center, trying to use the NYCHA portal to figure out what was going on with their case,” Luft said. “It was widespread. We were hearing from clients that they weren’t sleeping, making plans to move from their long-time homes.”

NYLAG acted decisively. On March 28, Luft said they informed NYCHA they would file an emergency injunction unless the agency immediately suspended Section 8 terminations and notified voucher holders of the error. By then, the case management system had gone rogue for months. The prolonged tech failure may have led tenants to self-evict or take other measures to avoid becoming suddenly accountable for a monthly rent they knew they couldn’t afford.

The agency has been less forthcoming about what will happen when the suspension is lifted, and Luft says tenants need to know that no one is going to be automatically terminated. Instead, NYCHA will start the recertification process anew using the packets they have received in part and in whole over the past year.

NYCHA, for its part, says the excess of termination notices came to the agency’s attention when the customer contact call volume increased in early March. In an email to The Riverdale Press, NYCHA spokesperson Rochel Leah Goldblatt said the culprit was a botched update to NYCHA’s document scanning system, which the agency undertook in September.

“NYCHA replaced an outdated scanning system that was at its end of support as part of an overall effort to update, streamline, and modernize,” Goldblatt wrote. But document matching between the old and new systems failed, she wrote, because they “were not properly loaded in the case management system due to the timeout being too short.”

She said data from new scans could not be validated against NYCHA’s case management system, which holds all resident data.

“NYCHA paused terminations in mid-March,” Goldblatt said, adding that, “NYCHA staff are working to manually ensure every resident, applicant and voucher holders’ file correctly reflects their status and has copies of all documentation sent.”

NYLAG’s threat of an emergency junction spurred more concerted action. On March 31, NYCHA posted online that all Section 8 terminations would be suspended, later pushing back the end of the suspension to Oct. 1.

“It’s important these things be communicated in plain language to the recipients in an acceptable way,” said Luft.

In the meantime, Goldblatt said NYCHA’s review of documents suggests roughly 10,500 of the 32,000 termination notices were sent in error, including 450 applicants and 300 residents in public housing. Some of the units in the NYCHA developments are  being converted into Section 8 housing.

That would leave 21,500 termination notices NYCHA purports were intentional, about a quarter of NYCHA’s entire Section 8 program. Goldblatt didn’t say if the final tally is expected to go up or down.