As the moratorium on ejecting renters draws near, some brace for the worst 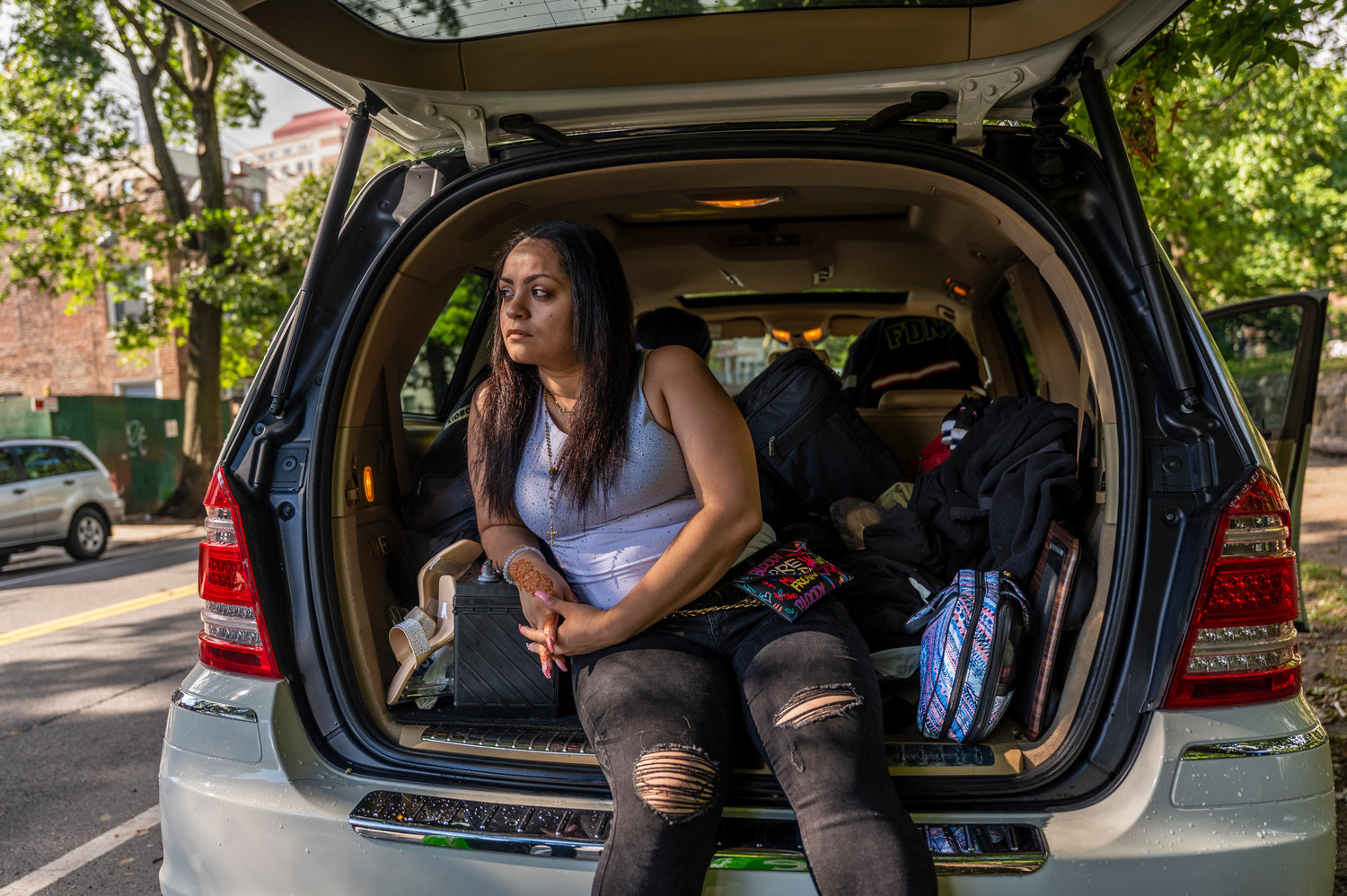 Jennifer Medina sits at the rear of her car where she keeps some of the things that belong to her and her son. Medina’s family is at risk of being evicted from their home if state lawmakers fail to extend the existing pandemic-related moratorium that’s right now preventing it.
HIRAM ALEJANDRO DURÃN 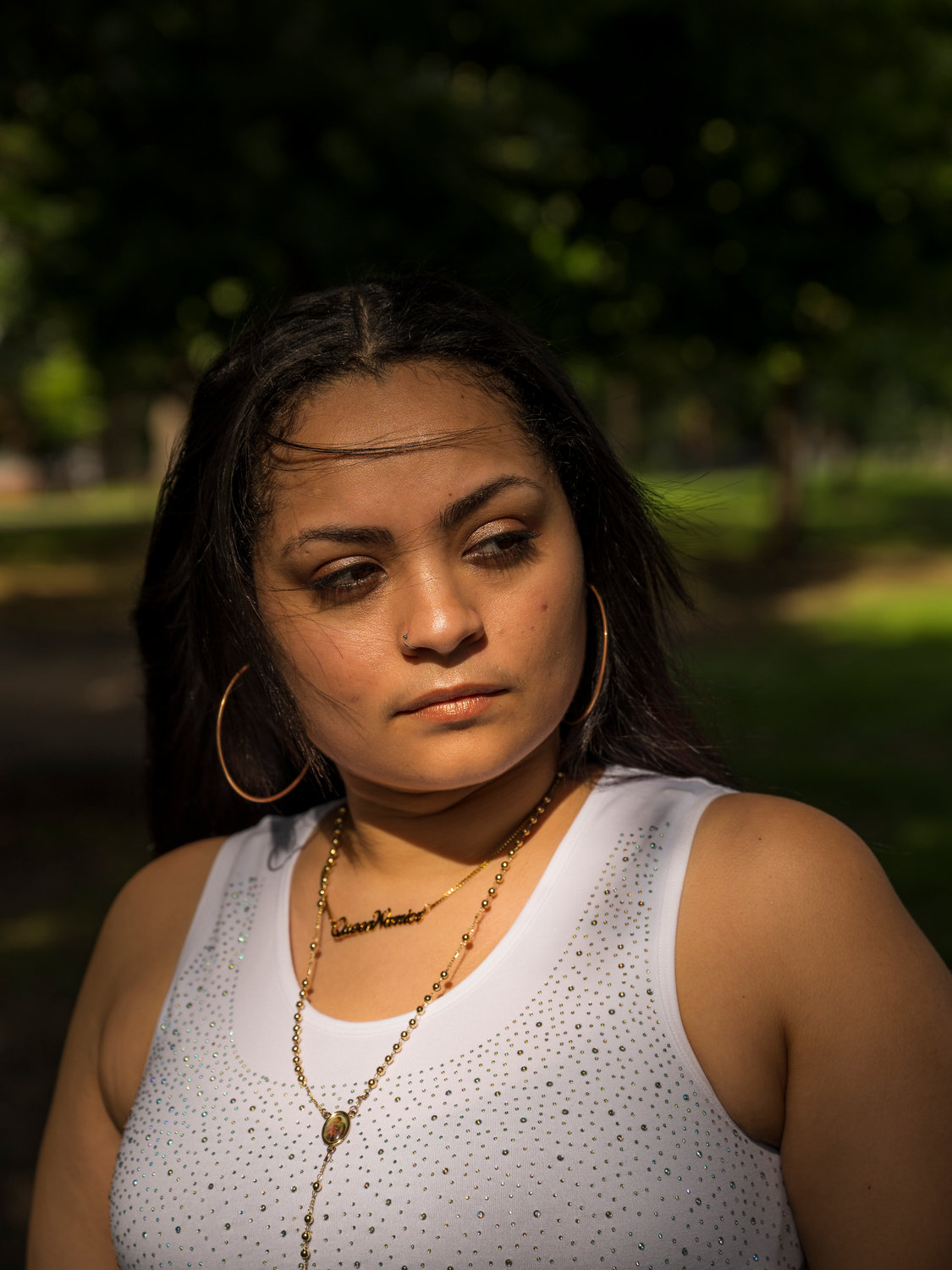 Jennifer Medina sits in a South Bronx park, contemplating the possibilities of staying with friends and family nearby if the state’s eviction moratorium — set up to protect residents financially harmed by the coronavirus pandemic — expires.
HIRAM ALEJANDRO DURÃN
Previous Next
Support journalism

Jennifer Medina always had it rough growing up in the Bronx.

The 33-year-old mother of five is all too familiar with having to overcome adversity. But this time it’s different.

“This past year has been unbelievably hard to deal with between the pandemic and then having to deal with unemployment,” Medina said. “To now have to face homelessness is one of the worst feelings in the world.”

Like many others throughout the country Medina has struggled to make ends meet since the spread of the coronavirus worldwide shut down large portions of the economy, costing many — like her — their jobs.

“I mean, it was hard before all of this happened,” she said. “But now it’s just too much.”

Medina faces eviction from her home next week when the state’s moratorium for kicking out renters who are struggling to pay landlords because of the pandemic is set to end. That has become yet another stressor among many for Medina since losing her job as an insurance policy processor. In fact, she’s contemplated leaving Kingsbridge — or even New York City — altogether.

And that’s not just because of the expiring eviction moratorium, but also rent prices that are just too steep for her to afford.

“Honestly, even if I were to find another place, how am I going to afford these rent prices?” Medina asked. “The Bronx is supposed to be the most affordable part of this city, but even then, the prices are still too high.”

Medina has a little breathing room — at least for the moment. Although the state’s moratorium ends when August does, at the federal level, the Centers for Disease Control and Prevention has its own eviction stoppage in place for those affected by COVID-19. The U.S. Supreme Court backed the CDC’s original moratorium — but by a thin margin. Justice Brett Kavanaugh was the swing vote in that decision, but already indicated if the court were to see another moratorium from the CDC, he likely would not vote the same way.

And that moratorium will eventually land back on the laps of the nation’s highest court, after the CDC earned a favorable ruling from a federal appeals court to keep the moratorium in place. If Kavanaugh does flip, it would require an act of Congress to extend the federal moratorium — something that is not likely without a strong Democratic majority in the U.S. Senate.

For now, state legislatures are working to extend their own version of the moratorium while trying to get federal emergency rental assistance money into the hands of tenants who need it most.

Even with that federal help, Medina says it won’t be enough to square things with her landlord. She’s been out of work since the first full month of the pandemic last year, and even with the weekly bonus money, her unemployment benefits just aren’t enough to take care of her five kids — including medical expenses for her daughter.

“Sometimes you have to make really tough choices,” Medina said, “and a lot of the times it’s boiled down to having to skip on the rent.”

Her landlord hasn’t been completely left in the lurch. Medina pays some of the rent when she can, but hasn’t delivered a full payment since May 2020.

She’s applied for public assistance, but is caught in the slow cogs of bureaucracy, waiting to find out if she even qualifies.

The assistance could help, but Medina prefers to return to work, especially since the federally backed unemployment benefit bonuses are also due to expire next month, making matters much, much worse.

It’s hard enough to focus on what’s happening now, but Medina also is thinking ahead, too. If her landlord does evict her, even if she lands on her feet again at some point, that blemish on her rental record may make finding a future home for her family near impossible.

“Now I have to worry about what this is going to do to my credit,” Medina said. “When I get my situation together, even after getting evicted, it’s still going to be hard to find a place to live. Finding apartments in this city is all about good credit, whether you’re buying or renting.”

Real estate experts believe one of the fallouts from the impending eviction crisis is finding a way to recover.

“I mean, it’s going to be hard for a lot of people to climb out of that hole,” said Francis Fowler, a real estate agent at the Oxford Property Group in Midtown. “Even if they have all the deposits necessary, if they can’t pass a background check to the satisfactory of landlords, most will take a hard pass.”

While it’s unlikely every landlord will report tenants to a credit bureau, Fowler points out that any tenant evicted through court proceedings will certainly have that information disclosed during a typical tenant background check. Finding a landlord who would give a lease to a tenant with such a history would indeed be difficult.

No longer denying the inevitable, Medina already has begun moving from her apartment, struggling to find a temporary place to store some of her things.

“Getting a storage room has been nuts,” she said. “It’s like trying to get a low-income apartment through a lottery system. It’s definitely added to the stress of trying to move past all of this.”

Despite the odds against her, Medina remains optimistic. Her youngest child now qualified to attend the city’s free preschool program for 3-year-olds, allowing Medina to finally return to the work force this fall.

“I can’t wait to get back into the swing of things, because at this point, I can only go up from here,” she said. “I feel like now I’ll have more opportunities, so I won’t be as constrained as I’ve been this past year.”

But getting some of that federal rent assistance could help a lot, too, Medina said, once the state government gets its act together to distribute it.

“If I can get work again and they hand out this rent relief, I feel like I’ll be OK,” she said. “I can keep my head above water.”

“Honestly, I can only tell you that God has been on my side, but I don’t even know how I haven’t given up yet,” Medina said. “I know things are rough now, but they’ll get better. I just have to weather through this storm.”