Great tool for those with dementia. 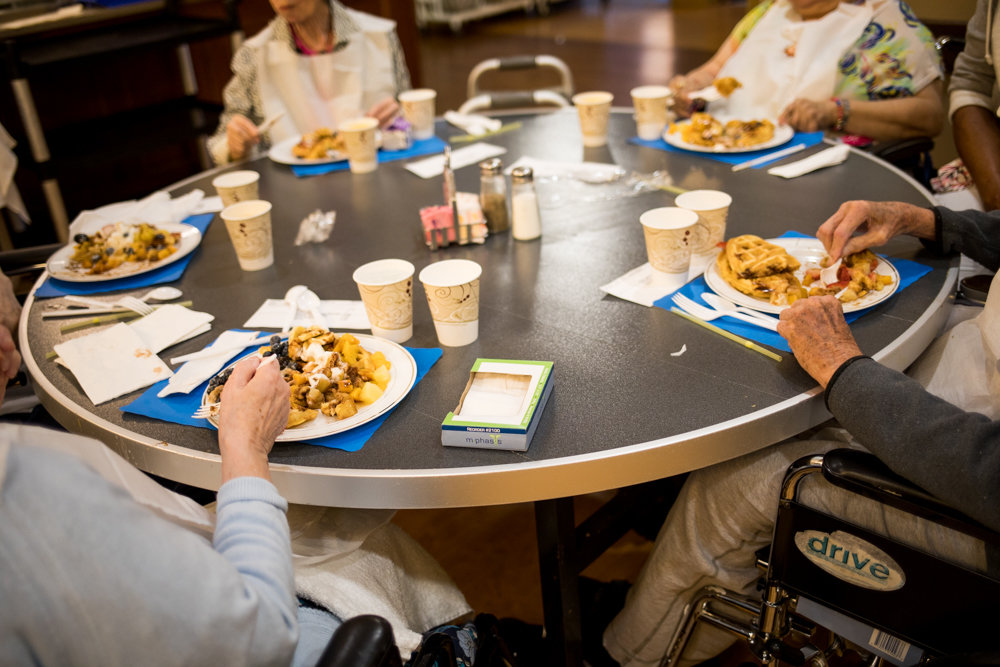 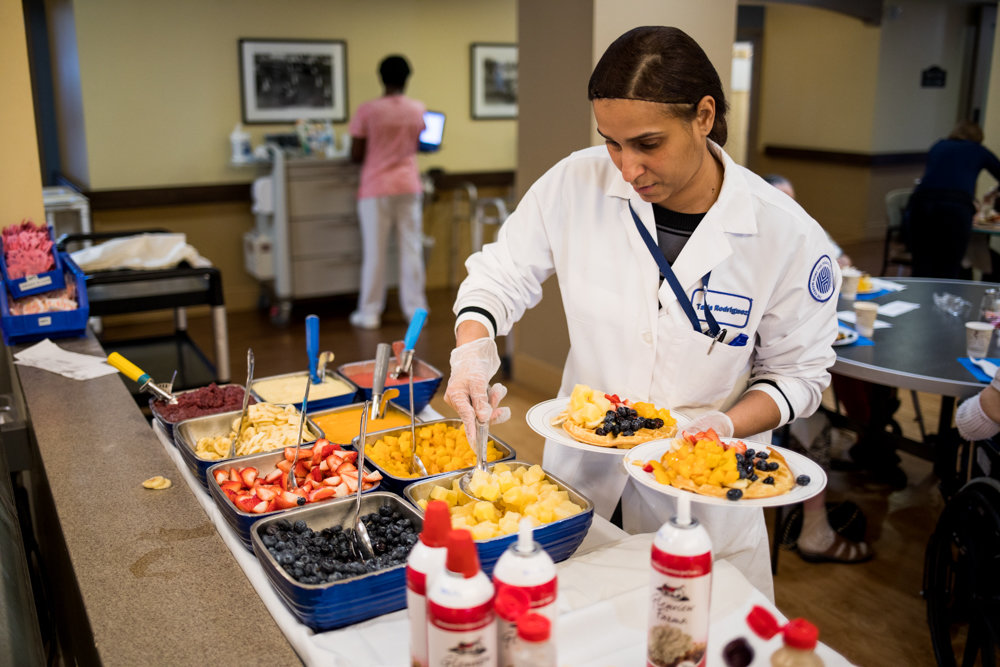 Tania Rodriguez scoops pineapple chunks onto waffles piled high with fruits at the Hebrew Home at Riverdale. The senior living facility treated their residents to waffles with all the trimmings, partly because they’re delicious, but also to evoke childhood memories for patients with dementia or Alzheimer’s.
JULIUS CONSTANTINE MOTAL 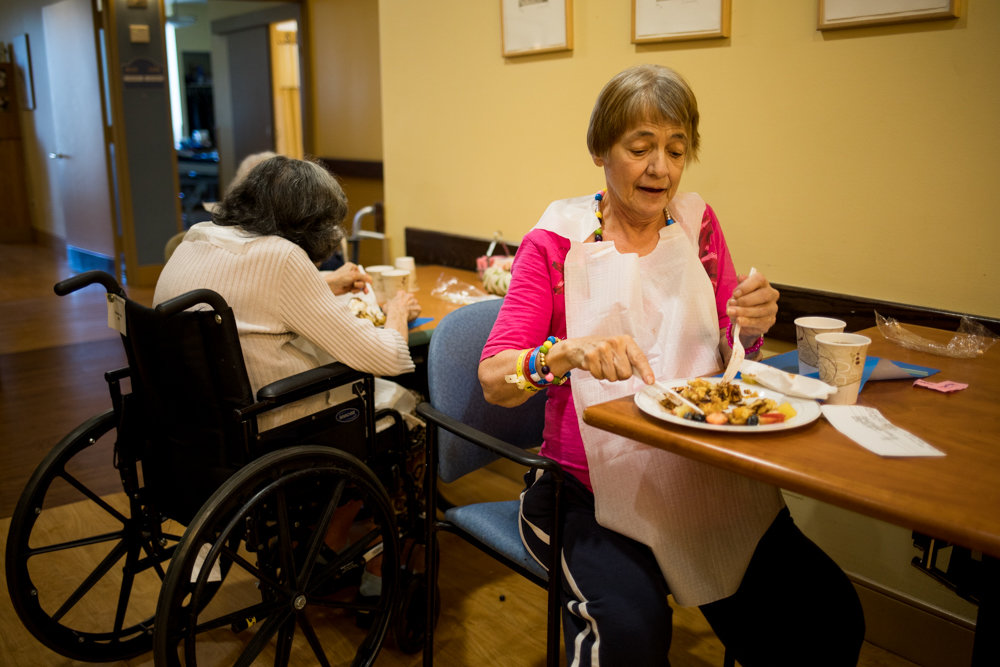 Jacquline Arafa feasts on a waffle with all the trimmings at the Hebrew Home at Riverdale. Arafa was delighted to chow down on the classic breakfast staple. The Hebrew Home served the waffles, in part, to evoke childhood memories for patients with dementia or Alzheimer’s.
JULIUS CONSTANTINE MOTAL 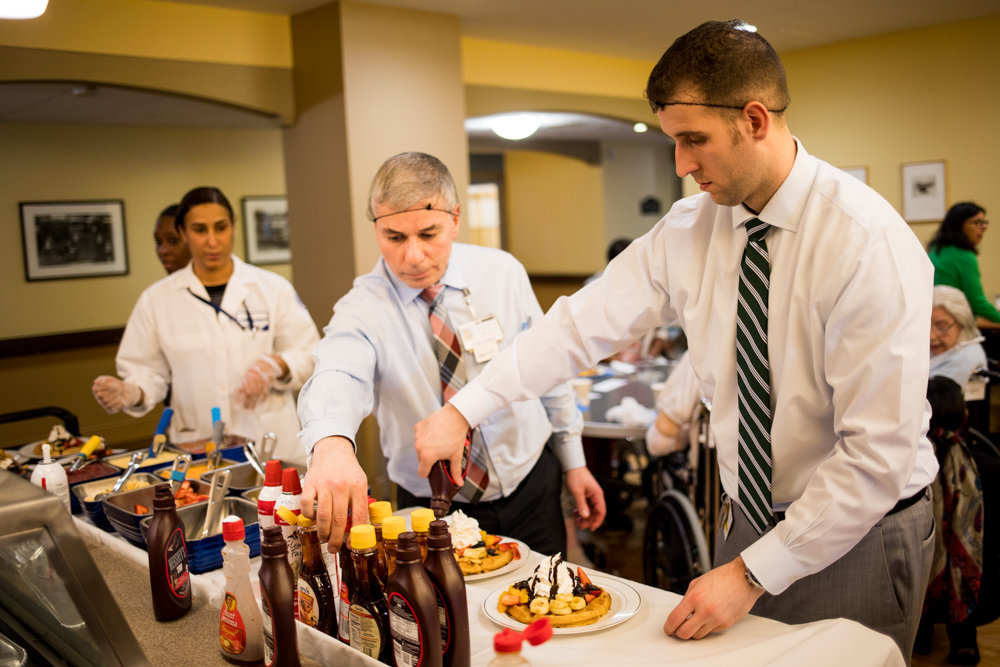 Tania Rodriguez, James Iatrou and Jon Kole prepare waffles for residents at the Hebrew Home at Riverdale. Residents were afforded the chance to feast on waffles piled high with fruit, whipped cream, syrup and chocolate sauce, or any number of combinations.
JULIUS CONSTANTINE MOTAL 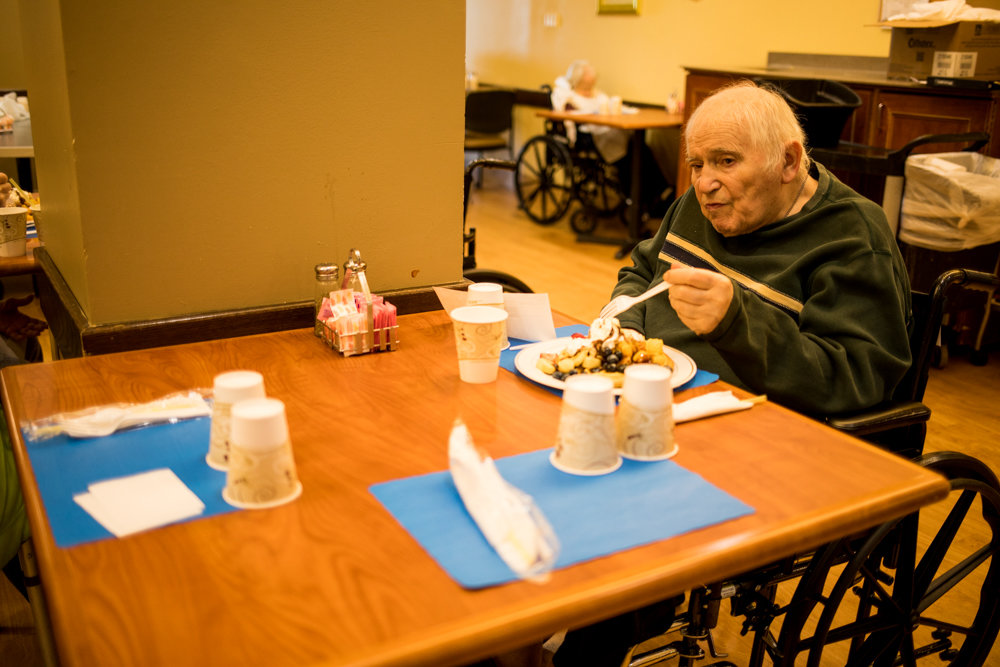 In all of his 93 years on the planet, Sam Richman never had the pleasure of biting into the fluffy goodness of a waffle — until now.

It wasn’t a transcendent moment for the elderly man, but it was a sweet one for him and other residents at the Hebrew Home at Riverdale as food services director James Iatrou and his team delivered the best waffles they could whip up at the annual event.

To the dismay of many residents — but in an effort to preserve the health of its senior residents — Iatrou doesn’t make waffles a daily event. But he does continue a tradition that has lasted longer than even his decade or so at Hebrew Home, personalizing each and every serving — even pureed if needed.

“They don’t get that very often,” Iatrou said. “So when they get it, they definitely let us know that they appreciate it.”

Although Richman wasn’t a fan of the pineapples on his waffle, the smell of the buttery treats was what pulled him and the others out of their rooms. Each waffle, depending on who is set to eat it, is adorned with fresh fruits like strawberries, blueberries and peaches. Whipped cream is also added along with chocolate sauce.

When residents received their food, it was like a tiny mountain of sweet.

“I just love watching how they enjoy it and how they look forward to it,” Iatrou said. “When we bring the waffles to their plates, their eyes light up and everything is put aside. And that’s what it’s all about— bringing a little sunshine and sweetness in their day.”

A whiff of waffles also can be beneficial to residents, especially those suffering from dementia or Alzheimer’s disease, Iatrou said. Sometimes the scent can evoke special memories for the residents — known as olfactory stimulation, which is when smells associated with certain moments bring a memory to light.

Although this was Phyllis Schleider’s first time enjoying a waffle, that didn’t stop her from talking about her favorite desserts.

“I like cake and many of things,” the 92-year-old said. “My mother was a very good cook, really. It’s good to be a kid again. My mother-in-law would make certain cakes, and she taught me how.”

Migdalia Persaud doesn’t quite remember eating waffles growing up, but she spoke to her choice of treats at the Hebrew Home, and in general.

“I like pudding, milkshakes, hamburgers and fries, and most of the stuff is good here,” Persaud said. “I’m enjoying my waffle, and there are a lot of things that I like. The fruit, the pineapple and the whipped cream. I love it. It’s like a family here.”

Whether residents have dementia or not, the waffles bring smiles to everyone. Iatrou likes to call what he does “waffle therapy.” He doesn’t disrupt the residents’ schedules as he visits two floors a day to serve them.

But Iatrou’s care and culinary skills do not stop at just brunch. At the Hebrew Home, residents also have barbecues during the warmer months and Seders for Passover.

“My job is to bring happiness and smiles to people’s faces,” Iatrou said. “It’s my primary objective. The home’s and my obligation is to make their stay here the best it could possibly be. And food is definitely a significant part of everyone’s day.

“And sometimes you can’t make everyone happy but I try to make as many as I can as happy as possible.”