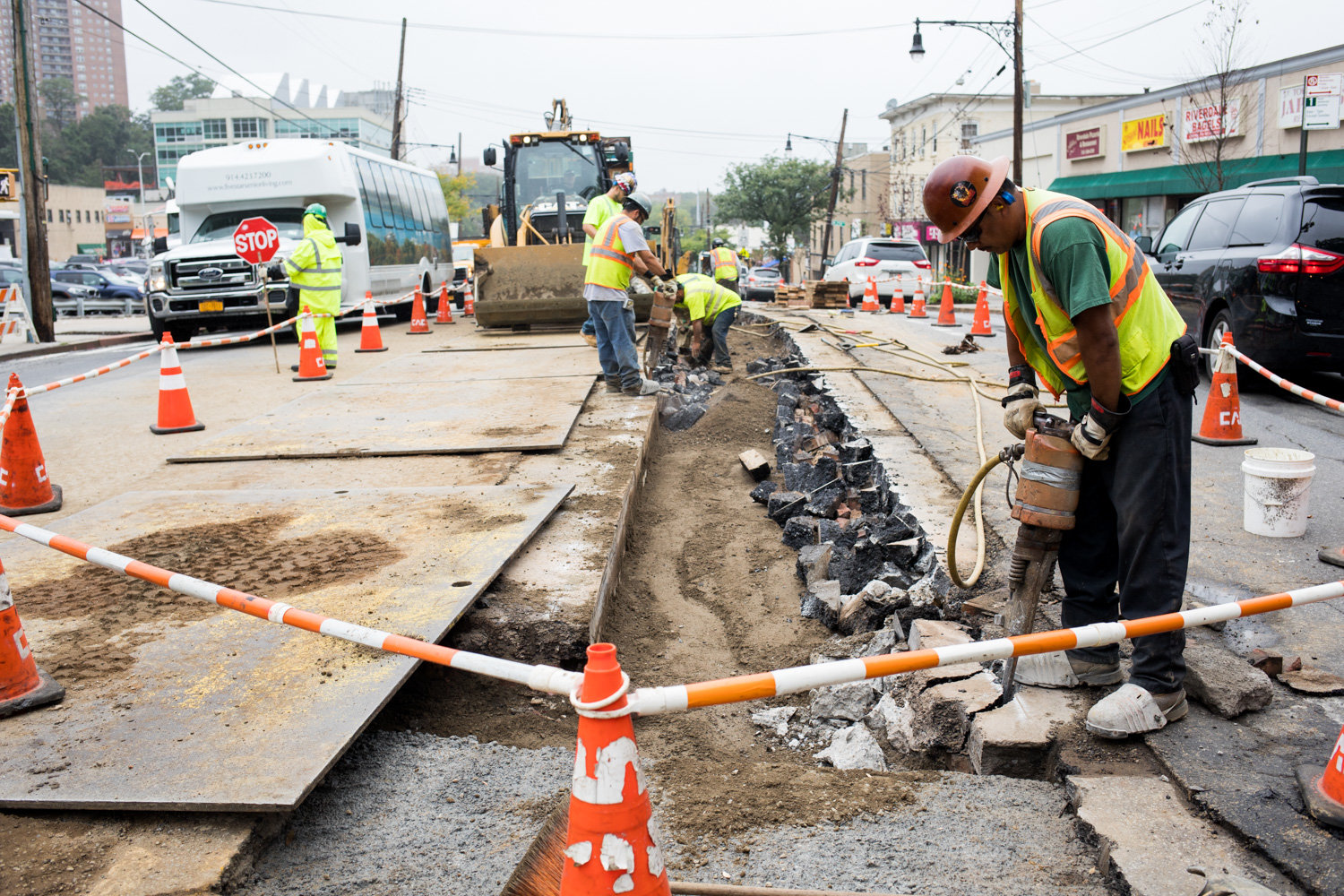 Some of the neighbors around Jerome Park Reservoir will likely not be too thrilled to hear their streets are about to be ripped up, like what has happened in North Riverdale over the past year. The work on Sedgwick Avenue and Fort Independence Street — and some of the smaller streets in between — is expected to create traffic delays, reroute buses, remove parking, and create occasional water service interruptions.
JULIUS CONSTANTINE MOTAL / File 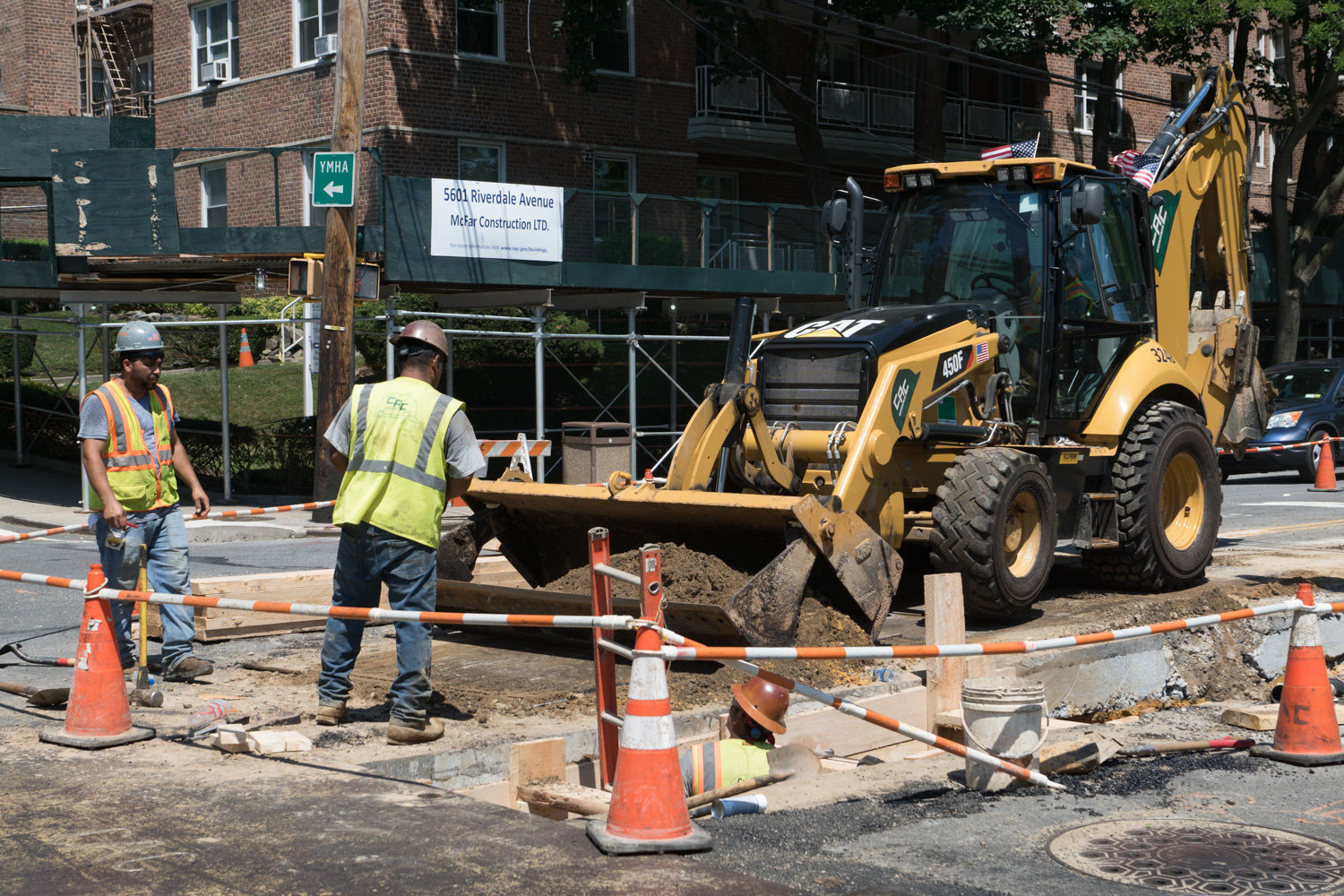 Where there’s a street, there’s probably going to be roadwork, like the kind seen in North Riverdale over the past year. The city’s design and construction department is set to being replacing water mains on the western side of Jerome Park Reservoir beginning in mid-January.
JULIUS CONSTANTINE MOTAL / File 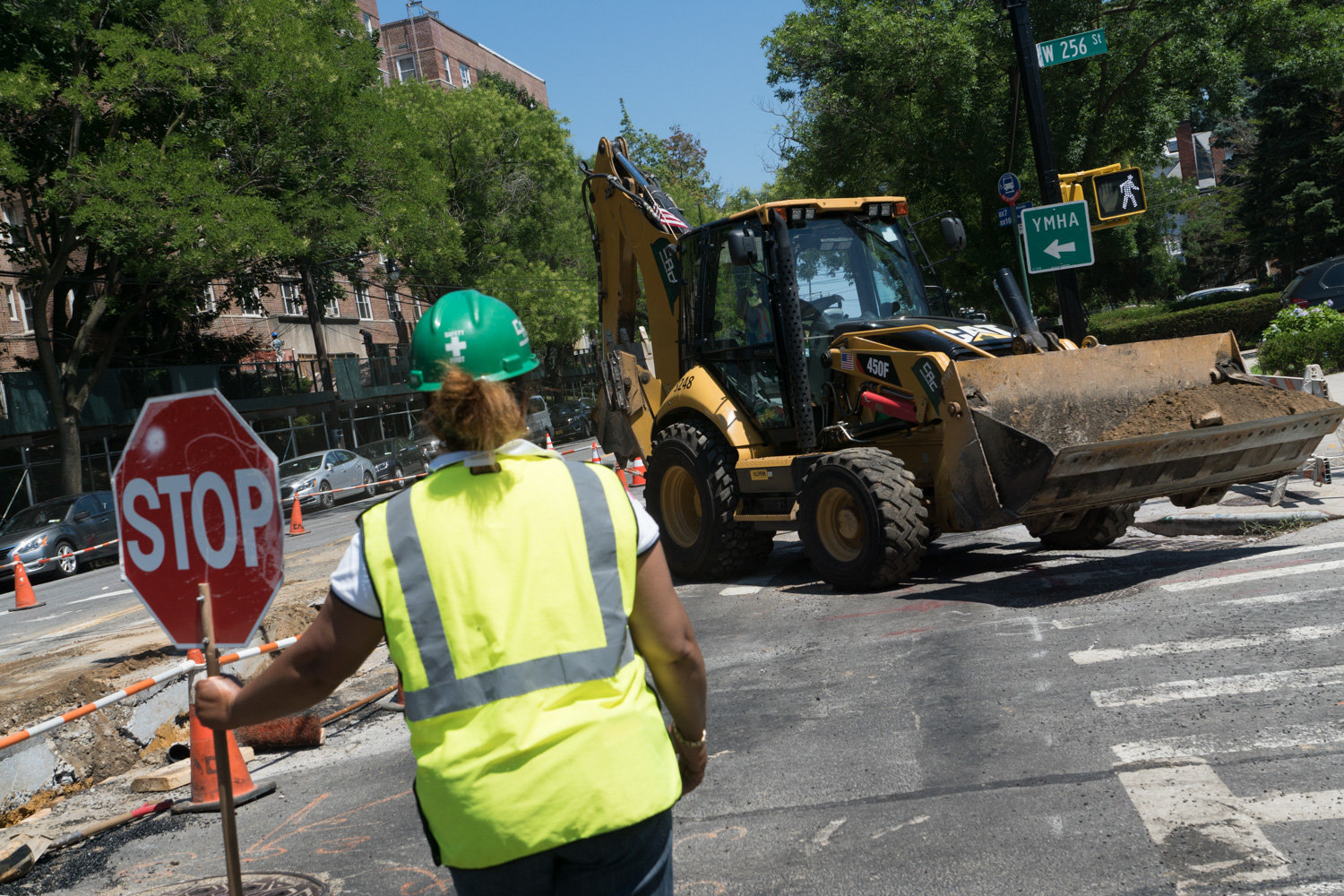 Motorists are likely to have a hard time around Jerome Park Reservoir with ongoing roadwork, like the kind seen in North Riverdale over the past year.
JULIUS CONSTANTINE MOTAL / File 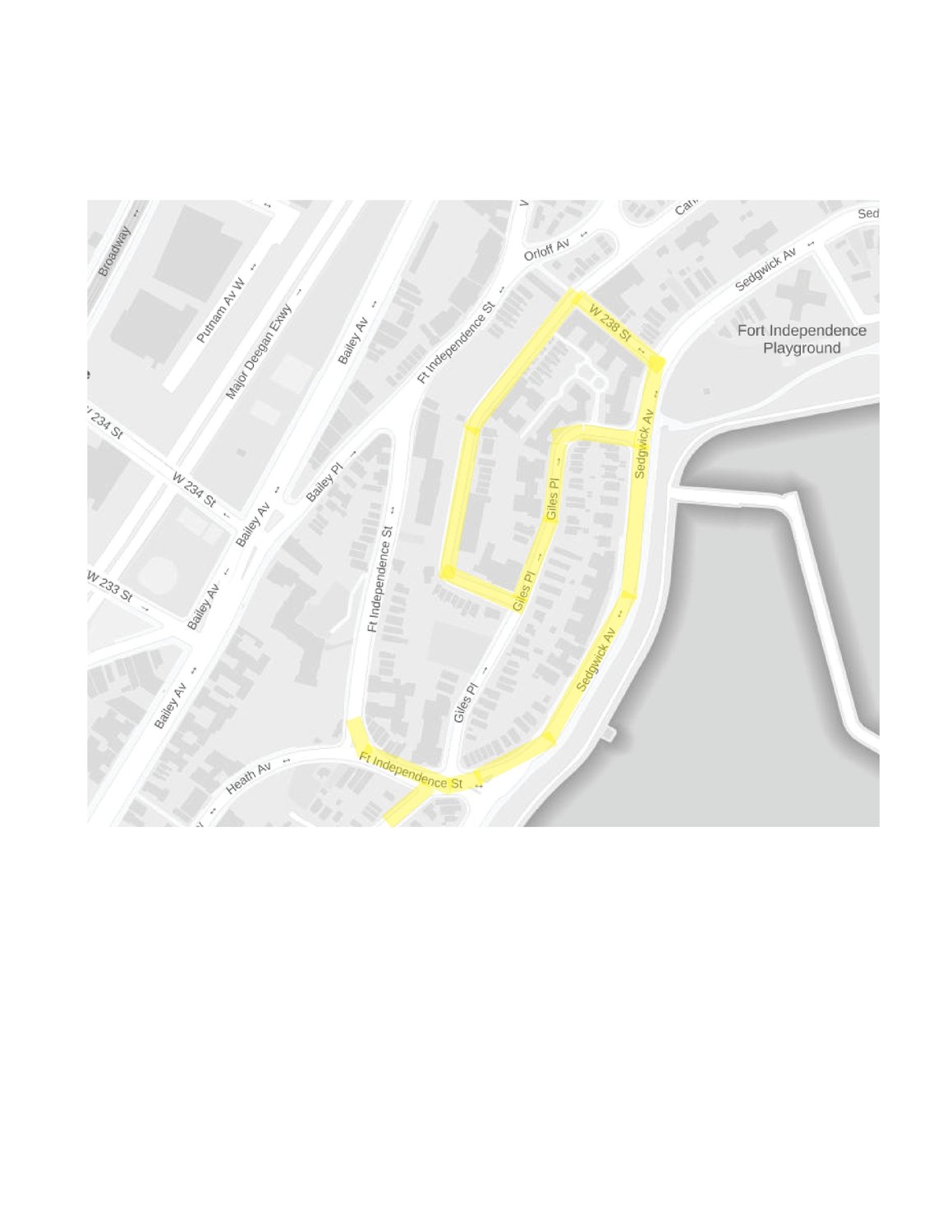 Previous Next
Be in the know ...

The city’s design and construction department is expected to regularly update neighbors on lane closures, parking suspensions and water service interruptions through its Neighborhood Notification Network.

There’s a secret buried just below the surface of New York City: Those pipes which are essential to bringing that famous-tasting water into our homes and businesses? They’re old. Like, really old.

Especially the pipes on the western side of the Jerome Park Reservoir that haven’t been touched since the late 1950s and early 1960s. Or for one pipe stretching along Cannon Place between West 238th Street and Giles Place, for nearly a century.

It’s time for those pipes to go, and the city has a plan to do just that. It’s just going to make for a bit of a long winter for anyone living around it.

The city’s design and construction department will begin ripping up Sedgwick Avenue, Fort Independence Street and the roadways in between just after the holidays as part of a $19 million water main replacement project. That means drivers should expect traffic delays and far less parking, while neighbors around the work zone should prepare for hours-long stretches of no running water.

The good news, according to DDC liaison Tara Figueroa, is that it will only last until March.

“Basically, we are installing a 12-inch water main,” Figueroa told members of Community Board 8’s environment and sanitation committee Monday night. “We are taking out an already existing pipe and just putting in a new one.”

The work will start on Sedgwick Avenue about two weeks after the new year, stretching from West 238th to Fort Independence. It continues on Giles Place, picking up a chunk of Cannon to the West 238th step street, as well as Fort Independence down the hill.

DDC doesn’t expect to close any streets during the project, but it will certainly be slow going past the work zones, Figueroa said. It may even require some rerouting of the Bx1 and Bx2 buses that use Sedgwick, as well as the Bx3 that travels the affected part of Fort Independence.

Most of the work is expected to take place during the week between 7 a.m. and 3:30 p.m., although work could last as long as 6 p.m., according to Maria Centeno, a DDC executive director. There also could be some Saturday work between 8 a.m. and 4 p.m., primarily to help accommodate schools, like the one located on the corner of Sedgwick and West 238th.

Wider streets will lose some parking, Centeno added, but the smaller streets could lose all available spaces while the pavement is opened. But unlike recent water main work in North Riverdale that seemed to take up a good chunk of 2019, these particular crews are expected to be in and out, only closing down smaller sections of the neighborhood for a week or less.

The work is part of what DDC is calling its accelerated water main replacement and sewer rehabilitation project. It targets aging infrastructure that is at least 50 years old and replaces it before it creates more serious problems, like main breaks. Workers not only replace pipes, but also upgrade fire hydrants, rebuild sidewalks and curbs as needed, and even prune street trees, according to a DDC flyer.

This particular project began earlier this year in Morris Heights, and continued into the Mount Hope neighborhood.

Karen Argenti, a former resident who remains a part of the environment and sanitation committee, insisted DDC agree to a specific set of guidelines in taking on the work, from giving three months notice before construction began, to ensuring no overnight parking spaces were removed, to even ensuring homes would have running water leading up to any important holidays.

Much of what DDC can do during the project, however, is regulated by the city’s transportation department, Centeno said, since streets are what’s most affected. Workers are tasked with providing as much notice about parking restrictions or lost water as possible, and signs will be placed to mark moved bus stops.

Any water interruption could last up to eight hours, but will typically come with at least 72 hours notice, Centeno said. Figueroa also will send out regular email updates both to a neighborhood distribution list, as well as the community board.

One way to ease the inconvenience of such construction work might be to suspend alternate side parking while the work goes on, Assemblyman Jeffrey Dinowitz suggested, increasing the likelihood that some parking in those areas might be available. Such a move is possible, Centeno said, but would require coordination not just with DOT, but also with the city’s sanitation department, which regulates alternate side parking for street cleaning and trash pickup.

“One of the problems we have here is a lack of parking, and it’s murder to park around here,” Dinowitz said. “It’s probably worse here than in any other place in my district.”

Other parts of the community had alternate side parking suspended during work, but the word never seemed to reach traffic cops, who ticketed cars following the temporary suspension, the Assemblyman said.

“If the Security Council at the U.N., can get things done while all speaking 10 or 15 languages, I’m hoping these three city agencies can get together, too,” Dinowitz said.