What’s in a name? Quite a lot if it’s McKelvey 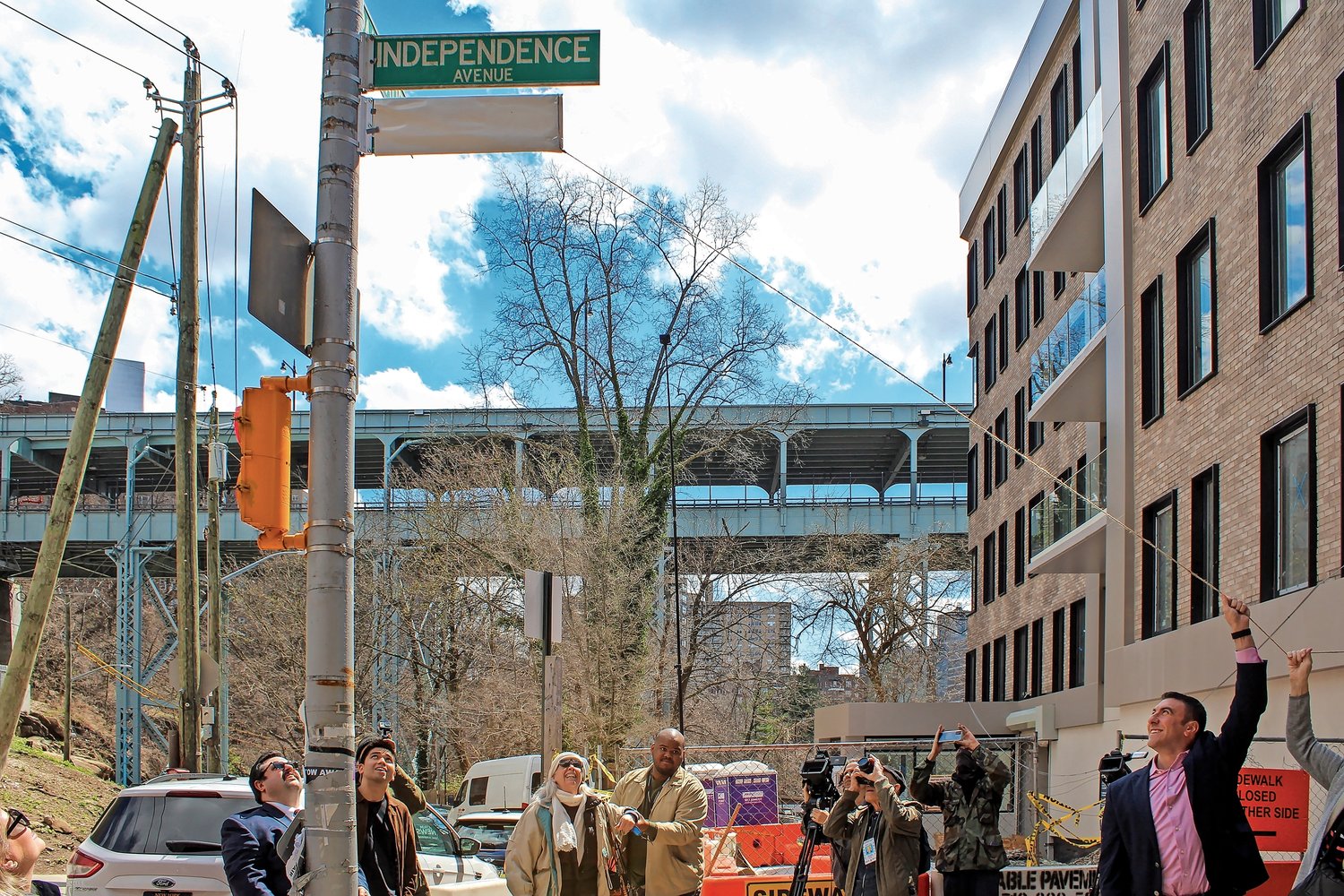 City councilman Eric Dinowitz and a host of guest speakers unveiled the historic co-street in Spuyten Duyvil April 8 to honor the late John J. McKelvey Sr. and his former building Villa Rosa Bonheur. It is at the intersection of Palisade and Independence avenues.
Courtesy of the Office of New York 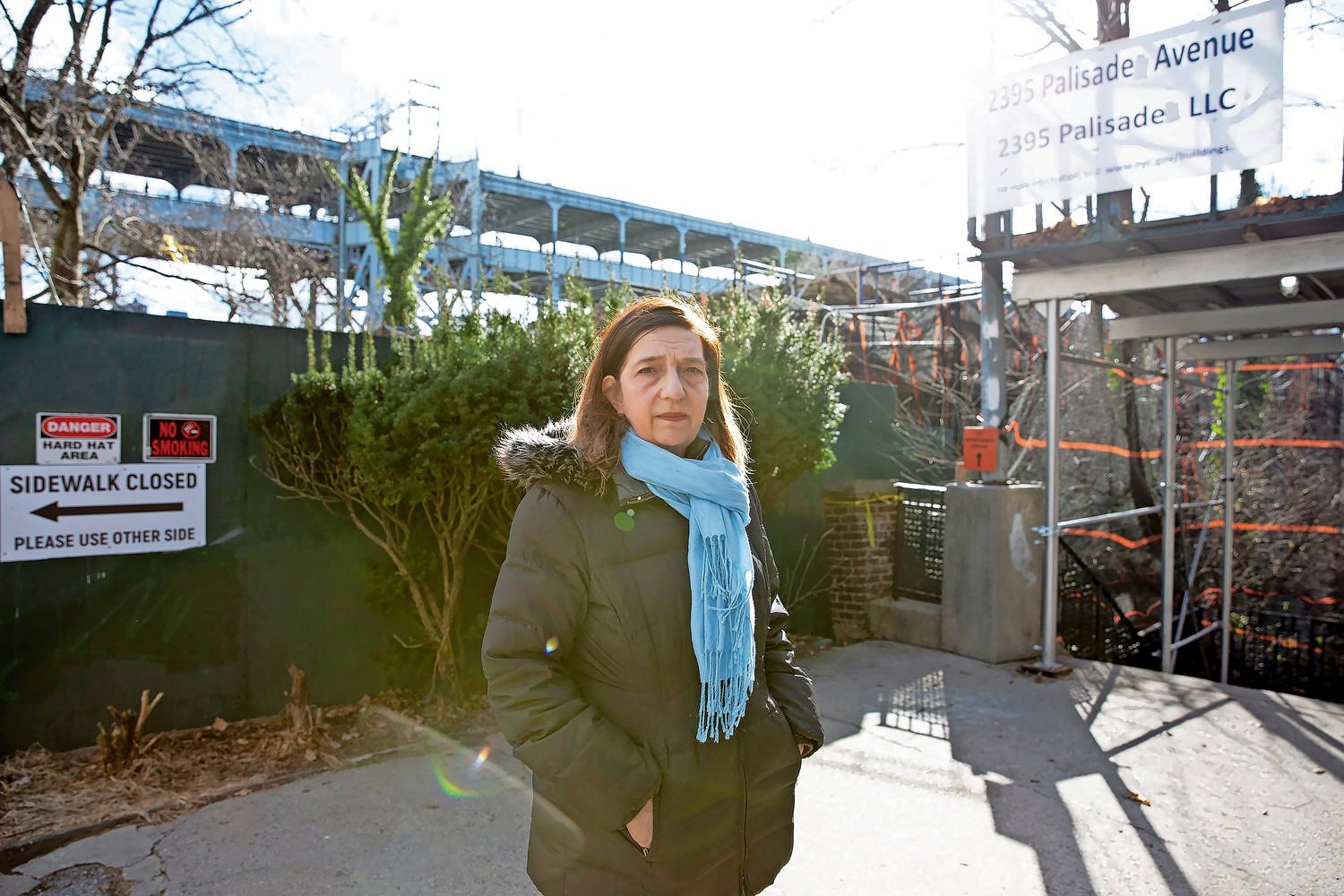 Community activist Stephanie Coggins led the fight to get Bradley Terrace, the step street that runs parallel to where the Villa Rosa Bonheur once stood, co-named for John J. McKelvey Sr., the architect who built the fabled apartment building.The intersection has been co-named after the late builder of the former Villa Rosa Bonheur.
EIAN KANTOR/ File
Previous Next
By STACY DRIKS

The historical Villa Rosa Bonheur building stood on Spuyten Duyvil soil for nearly nine decades until its demolition two years ago. One “accidental activist” stood alone and has succeeded to ensure future generations will never forget its name.

Due to the efforts of resident Stephanie Coggins, Friday, April 8 will be a day Spuyten Duyvil residents won’t soon forget. That’s when a street sign will be placed that will bear the names of the building and its owner and developer, John J. McKelvey Sr.

Street co-naming does not mean the intersection name will change — usually, it is a separate sign with the honoree’s name.

“I had to create a nomination letter,” Coggins said. “Then when they accepted that, I had to put together a presentation with all the historical references and present to them [community board] in person.”

In order to co-name a street, there is a set of rules the council wants a person to follow. The person needs to be dead at least two years — she got that down as he was dead for more than 50 years — however the committee bent that rule for her because she named the street after a building.

There was no rule to name a street after a building. The law and ethics committee had to change the board rules to accommodate her.

“We are a planned developmental community,” Coggins said.

She said that this project is very important for her and the community — and she feels after the demolition of the building the community lost something of themselves as well.

McKelvey, a renowned developer, builder, writer, attorney, and founding editor of Harvard Law Review, named his three buildings in greater Riverdale the “sisters” after French artists and added his fondness of Europe to create a villa that was a high-end luxurious place to live.

McKelvey’s grandson, Ed McKelvey, said that when his grandfather came to Spuyten Duyvil, he cared about the community. There was an element of trying to preserve its character that he felt was threatened by the encroachment of the “ugly city.”

In the 1950s, the Rabinowitz family bought the property and then sold it in 2017 to Timber Equities developers who wanted to renovate it. The new developer was not allowed to demolish it because they did not have a permit.

As the workers began to renovate, the building started to crumble. Concerned residents in the neighborhood became upset because the construction management was trying to destroy the building to the point of no return.

Workers ripped the roof and expensive Spanish clay tiles and left it all on the floor, which became a “catastrophe,” Coggins said.

People started to see a grim future for the building.

Community members brought it up to the community board, and the Department of Buildings didn’t see anything wrong with the management’s actions. So they let the workers chip away.

As it turns out, the department realized what was happening, and it took 11 weeks for the construction management to stop what they were doing as they were “fixing it.”

“There was a lot of controversies,” city Councilman Eric Dinowitz said.

Coggins says they destroyed it in a way that it became non-landmarkable.

It was the worst nightmare for the supporters of the building. Members of the community fought so hard to save it because it was architecturally unique.

Currently, there is a seven-story rental apartment building there.

“From our perspective, maybe sort of, something’s gone from the family legacy,” Ed McKelvey said.

Even though McKelvey is not a part of the Spuyten Duyvil community, he gets a sense of how dedicated the members were to his grandfather’s “charming buildings.”

From the beginning, Coggins received support from Dinowitz, who at the time was on the board serving as the aging committee chair of community board 8.

Dinowitz wanted to recognize the historical significance of Spuyten Duyvil and the unique architect.

Coggins said getting the co-street naming proposal passed by the city council was difficult. It took several months to get it to the community board and then another year to get it to Dinowitz.

“I put in the request for the street co-naming,” Dinowitz said.

“I collaborated with Stephanie Coggins, who has been very active on the naming and in our community.”