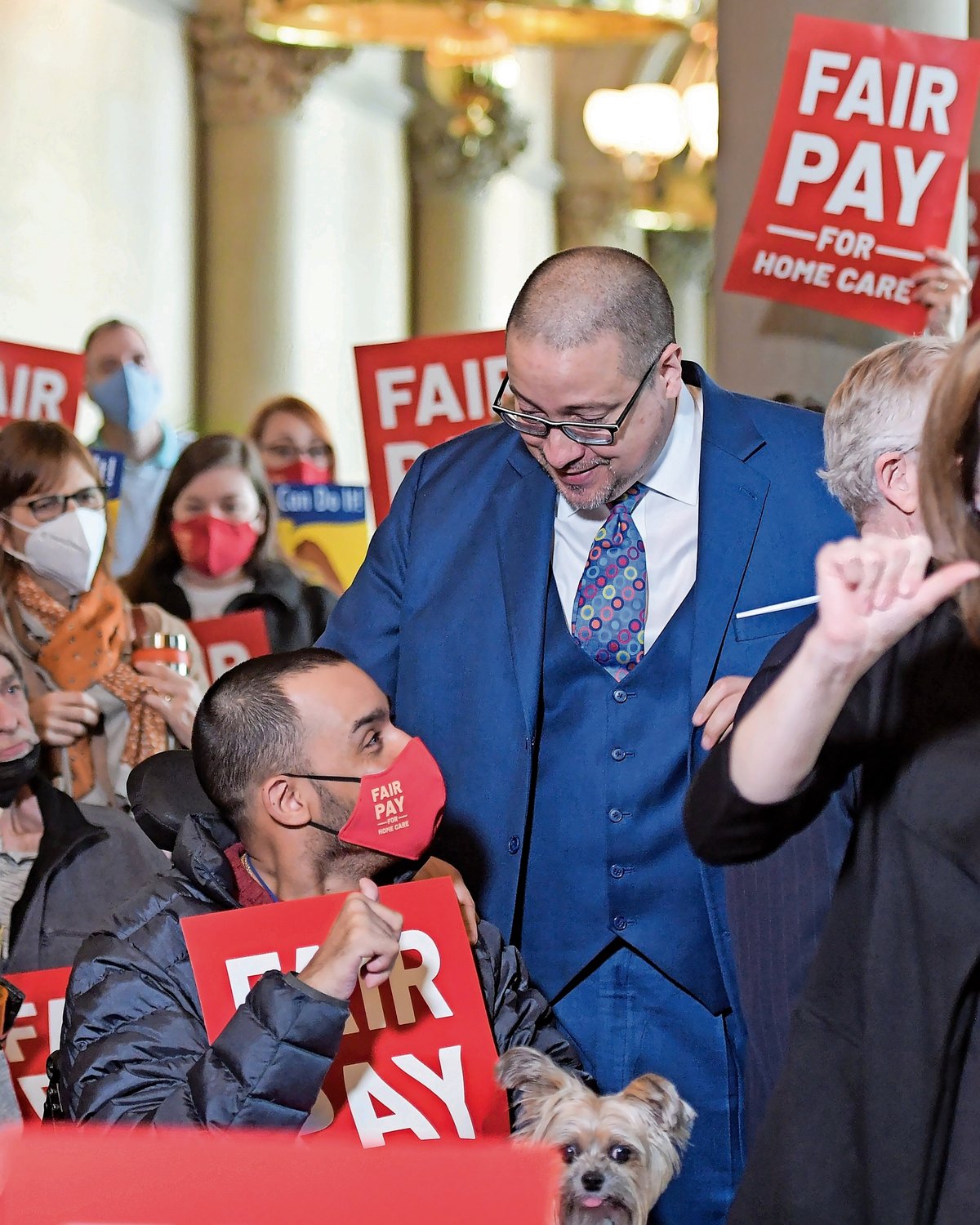 State Sen. Gustavo Rivera continues to be on a mission to ensure that every New York resident has comprehensive healthcare coverage. The incumbent has had that vision since he was first elected to the legislature.

In order to see that vision come true though, he needs to push his bill, the New York Health Act — which would abolish private health insurance in favor of a single-payer system — across the finish line. But before he can do even that, he first needs to get re-elected in the newly-drawn senate district 33.

“I’m the chair of the health committee,” he said. “There’s never been a person of color or a Bronxite that has had that position. And I take that responsibility very seriously,” he said, adding that Bronx County is the unhealthiest county in the state. “That is not something that happened overnight. And it is not something that can be fixed overnight. But try to fix it, we must. That is the reason why I do the legislative work that I do.”

But passing the New York Health Act is easier said than done. It was first introduced in 1991 by Assemblyman Richard Gottfried, and has been floating around Albany ever since.

When Rivera was first elected to office back in 2010, the Republican party still had a majority in the state senate — effectively wiping out any chance of the bill passing the upper chamber. In March 2018, Rivera became the main sponsor of the bill in the senate.

Since then, the Democrats have taken control of both chambers. Yet even with a Democratic majority, the bill still didn’t see any success this past legislative session. “This is something that I’ve committed — committed — to doing. Why didn’t it pass this year?” Rivera asked. “Because this is a difficult thing to pass.”

That’s partially because there are still two powerful camps pushing against its passage.

The first group is made up of various labor unions. “It is true that there are folks who are holdouts,” he said. The unions contend that they have foregone wage increases in order to bargain for better health care coverage. If the bill were to pass, all of those negotiations would be for naught.

Yet, Rivera argues that since coverage would no longer be tied to employment, unions can focus on bargaining for other benefits. If “you pass the New York Health Act, just because you’re a New Yorker, you will have guaranteed health care,” the senator said. “Therefore, your union can negotiate for much better conditions on everything else and not have to worry about this. Take it off the table.”

There are some unions, including the health care workers union SEIU and the New York state Nurses Association, that support the bill. Yet that’s not enough, particularly when there are other forces lobbying hard to ensure the bill never turns into law.

“There are deeply — like deeply — invested interests that do not want this to happen,” Rivera said. “Whether it’s insurance companies. Whether it’s big private hospitals that get a lot of their money from private pay as opposed to Medicaid.”

“We’re trying to do something that’s so fundamental. Nobody else has done it in the country … I have to make sure that everybody is on board. And I still have people in my conference who are not fully convinced. That’s one of the reasons I’m going to come back,” he said. “It is the priority.”

Yet even though Rivera has managed to be re-elected five times, he faces some unique hurdles to victory this year. That’s because Rivera no longer lives in the newly drawn district 33, thanks to the convoluted redistricting process due to a successful Republican-led court fight.

When the special master came out with the final version of the new senate map, Rivera’s Kingsbridge Heights residence — a rent-regulated apartment he has lived in for the past 22 years — was just two blocks west of the new district line. “It pains me greatly that I have to leave that. But that’s what I have to do,” Rivera said.

Where he’ll move is still a question with no answer.

“If I’m lucky I might be able to find something in the neighborhood that I’ve loved for 22 years,” he said. “But I won’t start looking until after I win. I got to wait.”

Yet Rivera can’t expect any help from his county party this election. That’s because the Bronx Democratic Party is backing his challenger, Miguelina Camilo, who has close ties to the organization.

The county party originally endorsed Camilo when she had launched her campaign in February for the now-defunct 36th district, which was an open seat at the time. But since then, the state’s senate lines were redrawn, and Camilo entered the new 33rd district race to face off against Rivera.

Shortly after the lines had shifted, Rivera asked the party to reconsider its endorsement, but was turned down.

“It’s disappointing because ultimately it’s kind of clear — and on paper — that they’re making the choice to support Ms. Camilo,” he said.

Even still, Rivera said running in the 33rd just makes the most sense for him, with or without the support of the party. The new district “is 50 percent of the current district I represent. My district office is in it,” the senator said. “When I got to the majority, how many millions of dollars did I put into schools, parks, community-based organizations, libraries in this part? I’m not going to give that up. We’ve helped thousands and thousands of people in this part of the district. I want to make sure that I can continue to represent it.”