Windows, viruses, rooms with a view: Dealing with quarantine 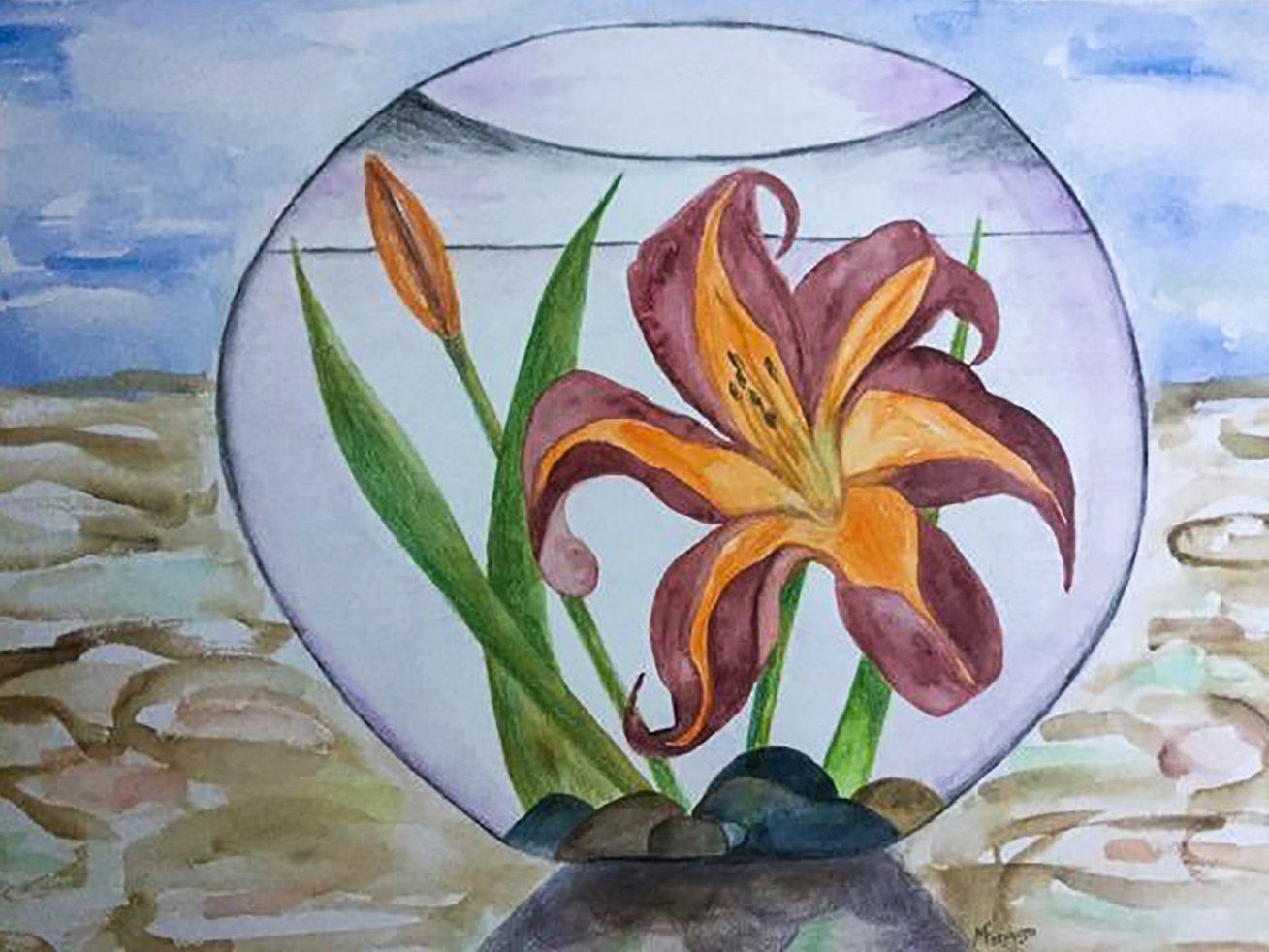 Maria Formoso’s ‘Quarantine Time’ is one of several pieces included in Riverdale Art Association’s online exhibit ‘Art in a Time of Quarantine.’.
Courtesy of Maria Formoso 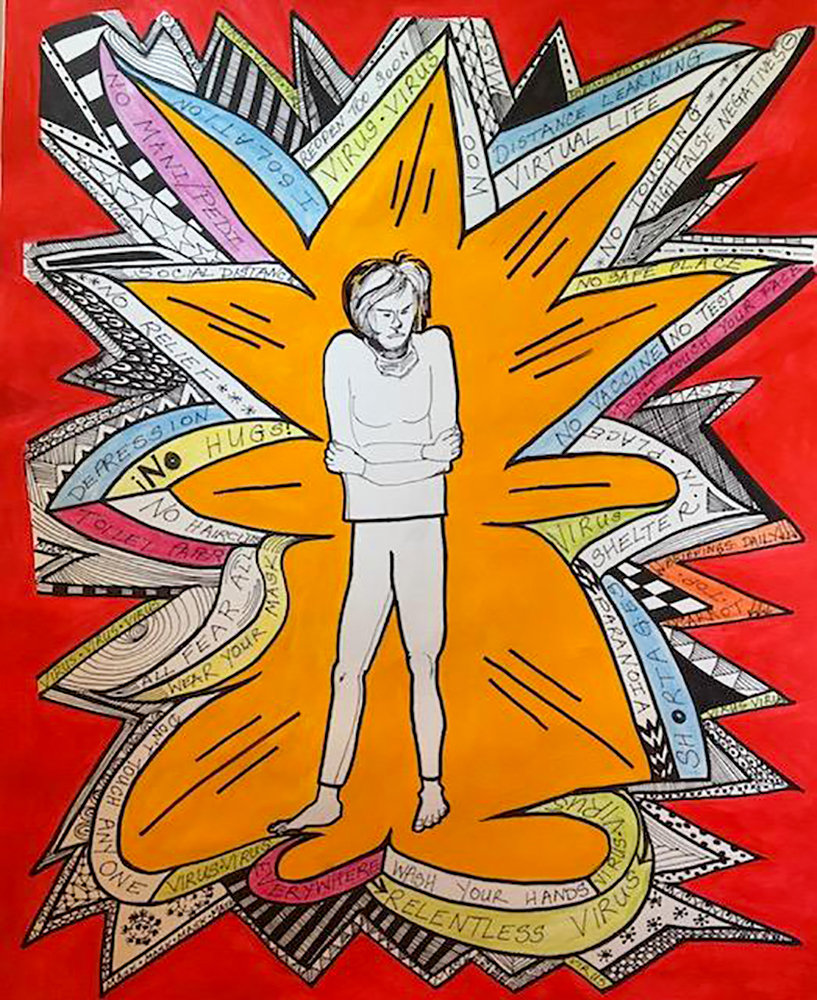 ‘Pandemic Stress,’ from Jaclyn Spitzer, is one of several pieces included in the online exhibition ‘Art in a Time of Quarantine’ from the Riverdale Art Association.
Courtesy of Jaclyn Spitzer.
Previous Next
By KIRSTYN BRENDLEN

It’s been several months now since many museums and art galleries began welcoming visitors once again. Many are selling limited tickets, blocking out periods of time for visitors to peruse the galleries and glean what insights they can before shuffling out to make room for the next block.

But the Riverdale Art Association doesn’t have a set physical space. No gallery or museum dedicated to their exhibitions. They popped up in available spaces around town — the halls of the Riverdale-Yonkers Society for Ethical Culture and The Riverdale Y. Even the lobby of an urgent care, an unexpectedly on-the-nose location. Some of their works are still hanging in the district office of state Sen. Alessandra Biaggi, even after the show was canceled because of the coronavirus.

Without their own home to set up in, the artists’ group has taken on a new way to exhibit their work — online.

For their second online-only show, the artists focused on one topic: “Art in a Time of Quarantine.”

It meant different things for different people. Some, like Joan O’Brien, focused on what they were seeing every day. The inside of their homes, their pets, and the people they were spending their days with. Myra Joyce, an artist and vice president of the art association, used her computer to take a new look at the windows she had been staring out of every day.

“Fractal art is art that is generated from mathematical equations,” she said. “I don’t do the equations. The software does the equations, and then it generates an image. I take that image in the computer and add or change parameters and colors and the way the light appears to fall on the image. I basically change what was spit out as an equation into something I consider art.”

It’s how she made the piece “on display” in the show, making a pattern out of a shot of her window and manipulating the shape and color.

A former neuroscientist, Joyce said some of her fractal work was influenced by her work, watching cells through her microscope and even imagining neurons, the cells that transmit messages and signals in the brain, on canvas.

“Sometimes I think my work is kind of depressing,” she said. “Like, I think that the walls thing was kind of depressing. So I don’t know if I see things through that lens of experience through sadness. And I’m really trying not to, which is why I’m taking my photos and combining them with the fractal images and trying to create more positive pictures.”

Joyce is also producing the video for each show, something she hadn’t had to worry about when they were exhibiting out in physical space.

“Finding the music, that’s the hard part,” she said. “And then the second hardest part is lining up the pictures with the music.”

It’s all fun, she said, but time-consuming. And it’s not quite the same experience as heading out to a physical gallery, said another artist, Thomas Maceranka.

“I don’t look at the videos. To me, it’s like a tease,” he said. “I’m loving online, and computer graphics, and I do digital stuff as well. I’m all for that, but there’s a fine line. I’d rather go to a show. It’s not the same thing.”

Maceranka’s piece, “Hostile Takeover,” took the pandemic on a little more closely — at a micro-level. He decided to represent the virus itself, the microscopic cause of all the chaos.

“It just happened,” he said. “I didn’t decide. When they came up with the show, I was already in the middle of doing this. Most of the stuff I usually do is abstract, and space, and planets. And this really came together on its own.”

“Building stuff, taking things and putting it together and slapping it on canvas,” he said. “So I take art and I take junk, and I put it together, basically.”

When he decided to depict the coronavirus, Maceranka went online to see what it looked like. He saw the now-ubiquitous image: A little ball covered with spines.

“I knew it looked like one of those massagers for your feet,” he said.

Maceranka ordered some of those little rollers online, cut them in half, and painted them. He prepared his canvas with a layer of plaster for texture, then set about gluing the rollers down and painting everything.

The virus isn’t the only thing on the canvas. Maceranka also added some white dots and leftover home insulation from his job — little white fibers representing the white blood cells staging an attack on the virus.

“I have a second one coming,” he said. “This one here is ‘Hostile Takeover,’ but I’m going to do one called ‘Divide and Conquer,’ so the white blood cells will be kicking the virus’ (behind). So maybe at the end of this year, if we get a vaccine, I’ll come out with that one.”

“Art in a Time of Quarantine” will remain online for art-lovers to peruse, and already has been joined by more: “Moving Forward.” Both can be found by visiting RiverdaleArtAssociation.org.

“We’re all in this state of mind lately, that it’s very hard to think about things moving forward, especially between COVID and the elections,” Joyce said. “Even I had a lot of problems coming up with art for this ‘Moving Forward’ theme, and it seems like a lot of us are in the same boat.”