An Beal Bocht has yet to return to live performances, but that’s where tech comes into play 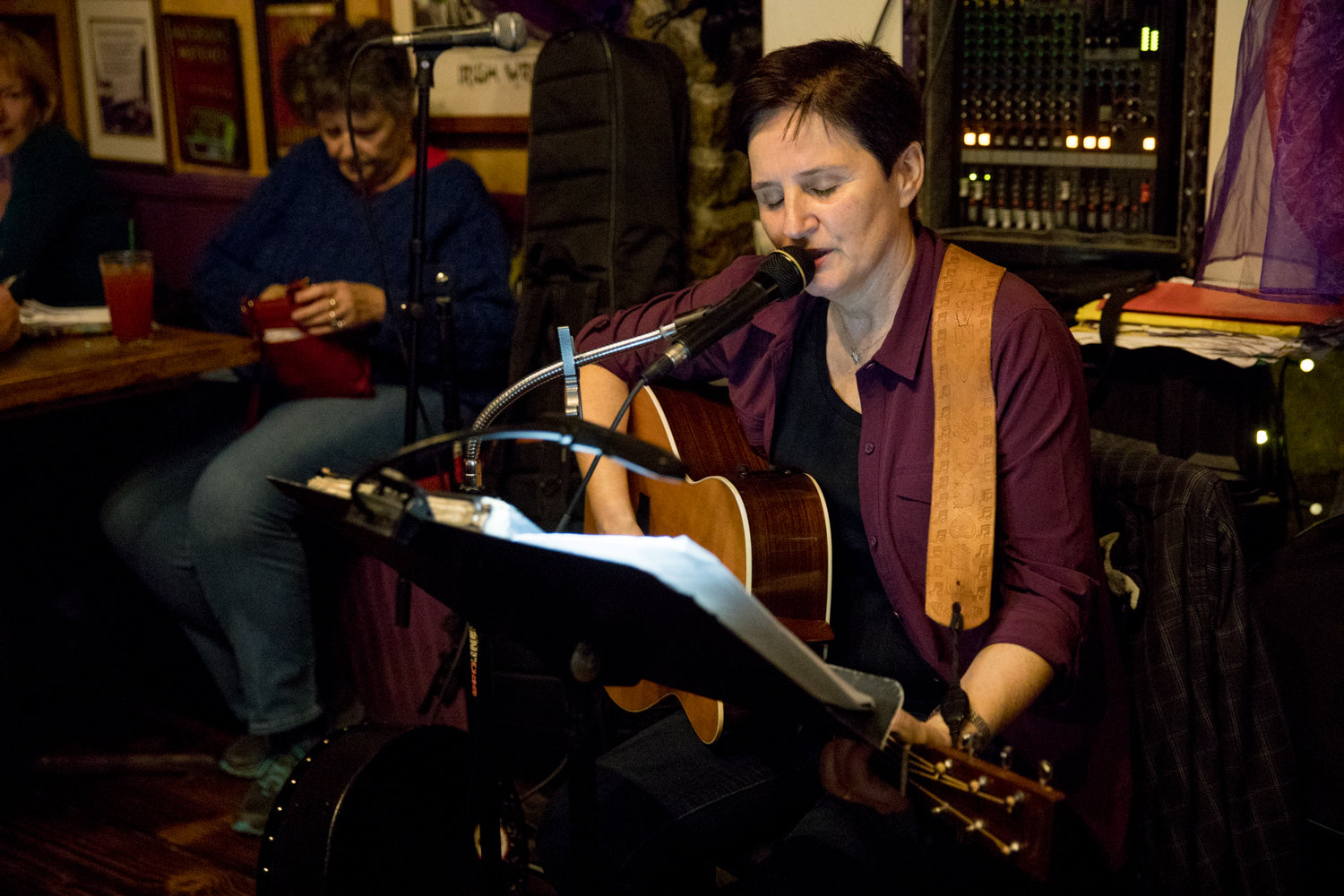 Irish musician and longtime performer at An Beal Bocht Cafe Mary Courtney has adapted to the shelter-in-place order implemented for New York State by taking her songs to Facebook live, where patrons who’ve come to know Courtney’s work can interact with her in a more direct manner.
JULIUS CONSTANTINE MOTAL / File 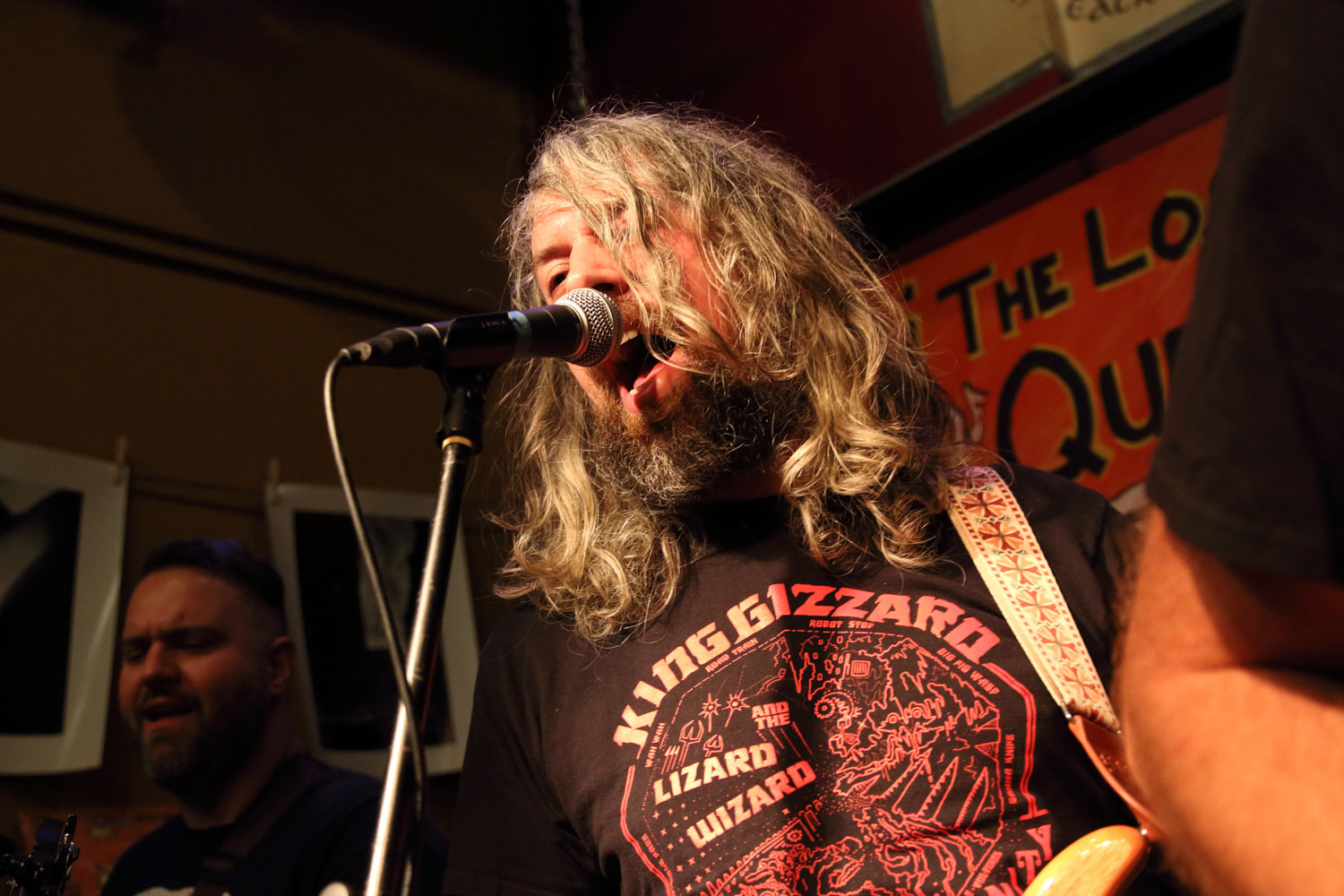 Musician and longtime patron of An Beal Bocht Café Chris McShane noticed that many of the familiar singers and songwriters of the West 238th Street café had migrated onto Facebook live in order to play for the community. After contacting them, McShane put together ‘The Beal Bocht Streamers,’ which acts as a setlist for patrons to know when their favorite musicians are playing.
Courtesy of Diana McShane 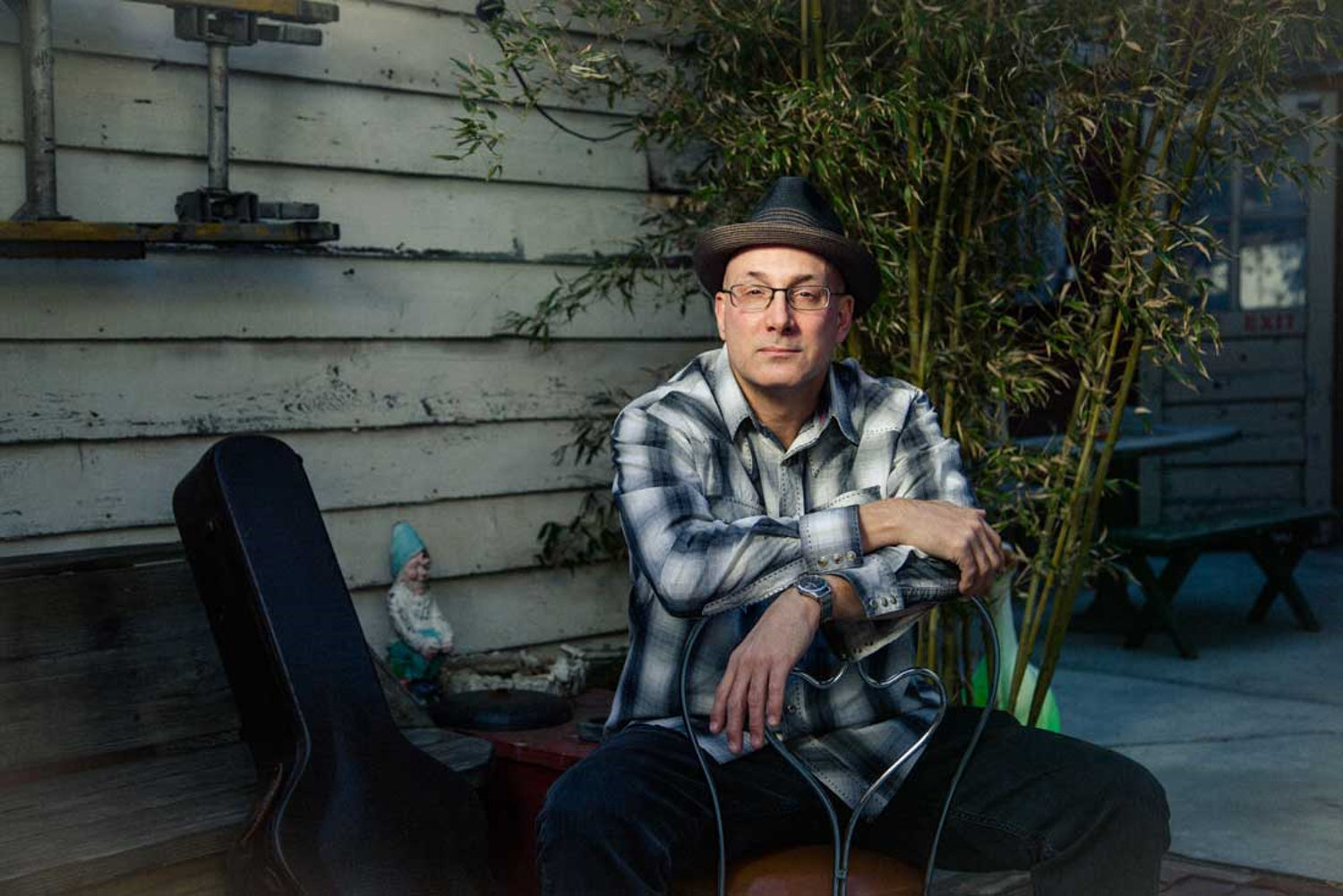 It wasn’t easy for John Pinamonti to figure out how to stream a half hour set of music on Facebook live, but was glad to interact with friends new and old, even through a screen. Pinamonti is one of many musicians on ‘The Beal Bocht Streamers’ setlist, an ever-expanding schedule of musician’s livestreams.
Courtesy of John Pinamonti 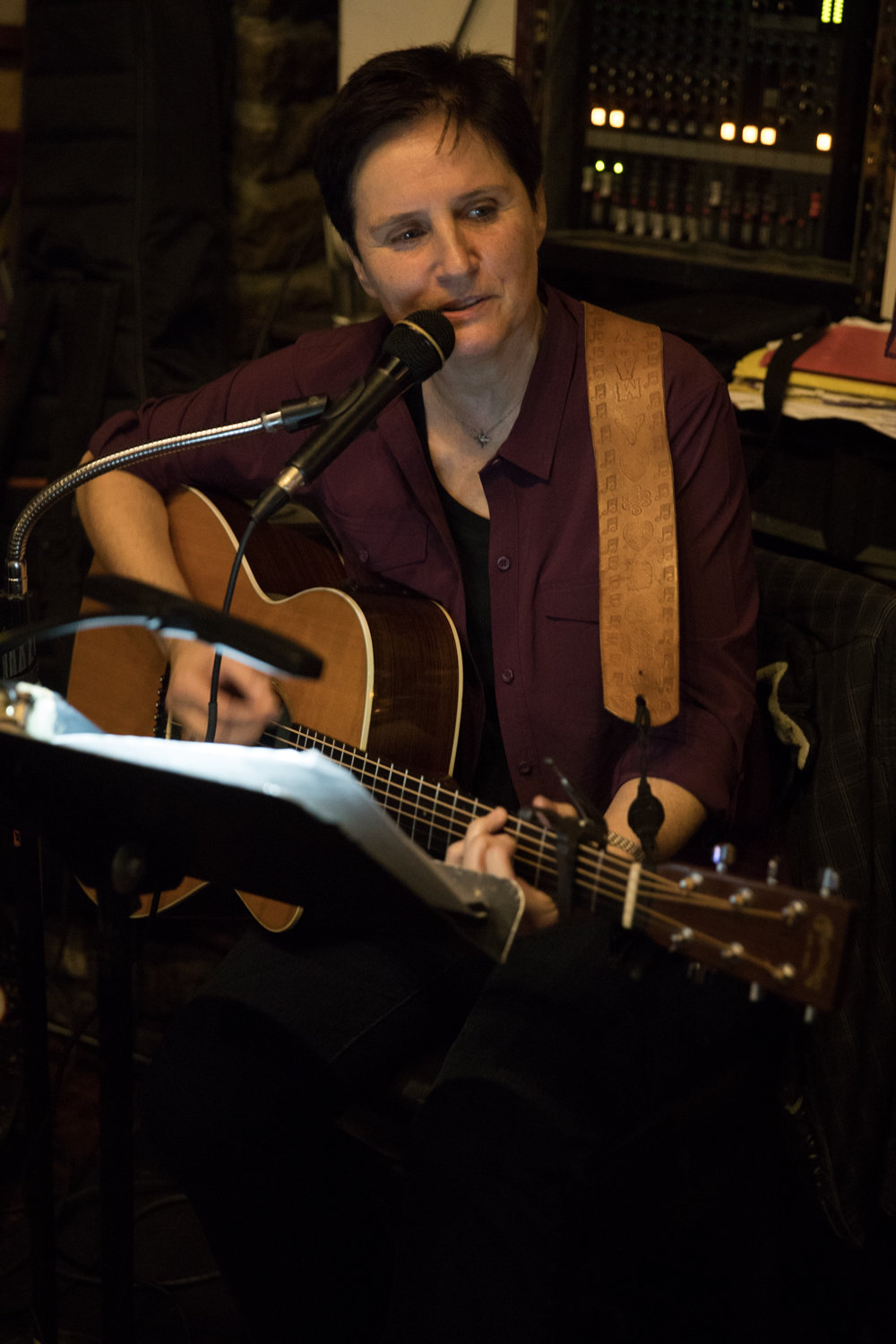 Mary Courtney plays for a packed An Beal Bocht Café crowd on an October evening. After being ill for several months, Courtney had been unable to perform at the bar several times, but has since been able to play for and speak with all the regulars and new faces over Facebook live.
JULIUS CONSTANTINE MOTAL / File
Previous Next
By RAPHAEL LASSAUZE

If a musician starts a consistent schedule at An Beal, their names become community fixtures. The regulars have clinked glasses with them. Newcomers find the performers’ names oddly familiar. And the last Friday night straggler hums the music from earlier that night as they slowly don their jacket and depart.

But like all non-essential businesses during the pandemic, the bar has closed. Like all great cafes, the dance floor is dark and silent, and the sets have been canceled. For career musicians like John Pinamonti, being stuck at home with no one to play for — or with — was a genuine trial.

“I was in a zone where I wasn’t reading and wasn’t playing music,” Pinamonti said. “It felt like there was nothing for me to do. I kept thinking about the night before the Beal Bocht closed.”

That was March 16. Pinamonti wondered that evening when he’d play a live set ever again. As one week became two of musical inactivity, Pinamonti rose from his stupor after a visit to Facebook. He noticed his fellow musicians — including James Margolis, Fausto Bozza, Rob McMahon and Johnny Seven — were livestreaming entire solo sets.

“I’d never done a sort of ‘live from my house’ thing,” Pinamonti said. “I’d heard people’s videos of my live sets, and they sounded awful, and before all this I’d never wanted to do that. But I tried it after seeing Johnny Seven put together a time to play online, and you know what? I found a lot I could do with this setup.”

While Pinamonti described his first stream as less than perfect, he kept at it, dedicating every Tuesday evening at 7:30 to a half-hour set.

He purchased a new microphone, experimented with cameras, and busted out different instruments and new tunes reflective of his Americana rock style.

“I want it to look good and sound good,” Pinamonti said. “The best thing is playing music for the same people I’d play for at the Bocht, seeing their comments as I play.”

Pinamonti wasn’t the only one who noticed his fellow musicians livestreaming. Manhattan College alumnus, musician and 15-year patron of An Beal Chris McShane had logged on to listen to old friends play music since the start of the state shutdown.

“We used to have a regular schedule at the Bocht for when people would play,” McShane said. “So, I thought letting the community know when their favorite musicians were playing would help everyone out.”

McShane and fellow musician Adam Wisnieski set about designing a poster, and so, “The Beal Bocht Streamers” set list was born. Unlike a poster found on the railing of the stone steps on West 238th, however, this wasn’t permanent.

“If anyone played at the Beal Bocht, we’d like to add them to the listing,” McShane said. “We think everyone should be able to hear each other right now.”

James Margolis wasn’t on the first list, but was on the second before he knew it. After a livestream with the Astoria Music Collective, he got a call from a friend from An Beal.

“When all this started, my gigs got canceled,” Margolis said. “I’m furloughed from my job as a sound guy. I was wondering how to stay afloat, and so I started livestreaming. Every little bit helps.”

Margolis began his first stream for the Beal Bocht Streamers at the start of May. His focus, like Pinamonti’s, has since been on music and the people beyond the screen.

“A lot’s going to change from all this,” Margolis said. “Can’t wait to go back to get a drink with a friend that got postponed, but we’ve got to be safe right now.”

Margolis, Pinamonti, and many others were able to start livestreaming their music from the get-go. Not so for Mary Courtney, who, in good health, has performed at An Beal Bocht since 1993. But not so in bad health.

“I got real sick long before this all started happening,” Courtney said. “I had terrible inflammation, taking too many Aleves, and before I knew it, I collapsed on stage in College Point. By the time I was good enough to be discharged from the hospital, this had started.”

After watching her line of gigs fall away as the state rapidly shut down, Courtney contacted her old friends from the Bocht before hearing a suggestion that, at first, she didn’t love.

“I get so anxious about technology,” Courtney said, laughing. “And I was trying to figure all that out. But I did, eventually. I got back onto my old time for 6 on Friday evenings. I’m so happy to sing and play.”

Courtney refers to An Beal Bocht Café as a sort of dance hall or community hub, similar to the one her parents owned in Ireland’s County Kerry. She, like her fellow musicians — as well as its patrons — cannot return to the dance hall anytime soon. For now, they cheer each other on and listen to each other’s music from the safety of their own homes.

“All the people listening and the old friends from the Bocht send money and kind messages, and it’s just so kind,” Courtney said. “My neighbors and my friends are doing their best right now to help each other out in any way we can. That’s so heartwarming to me.”