With Lopez down, it’s time for Bronx Science to go West 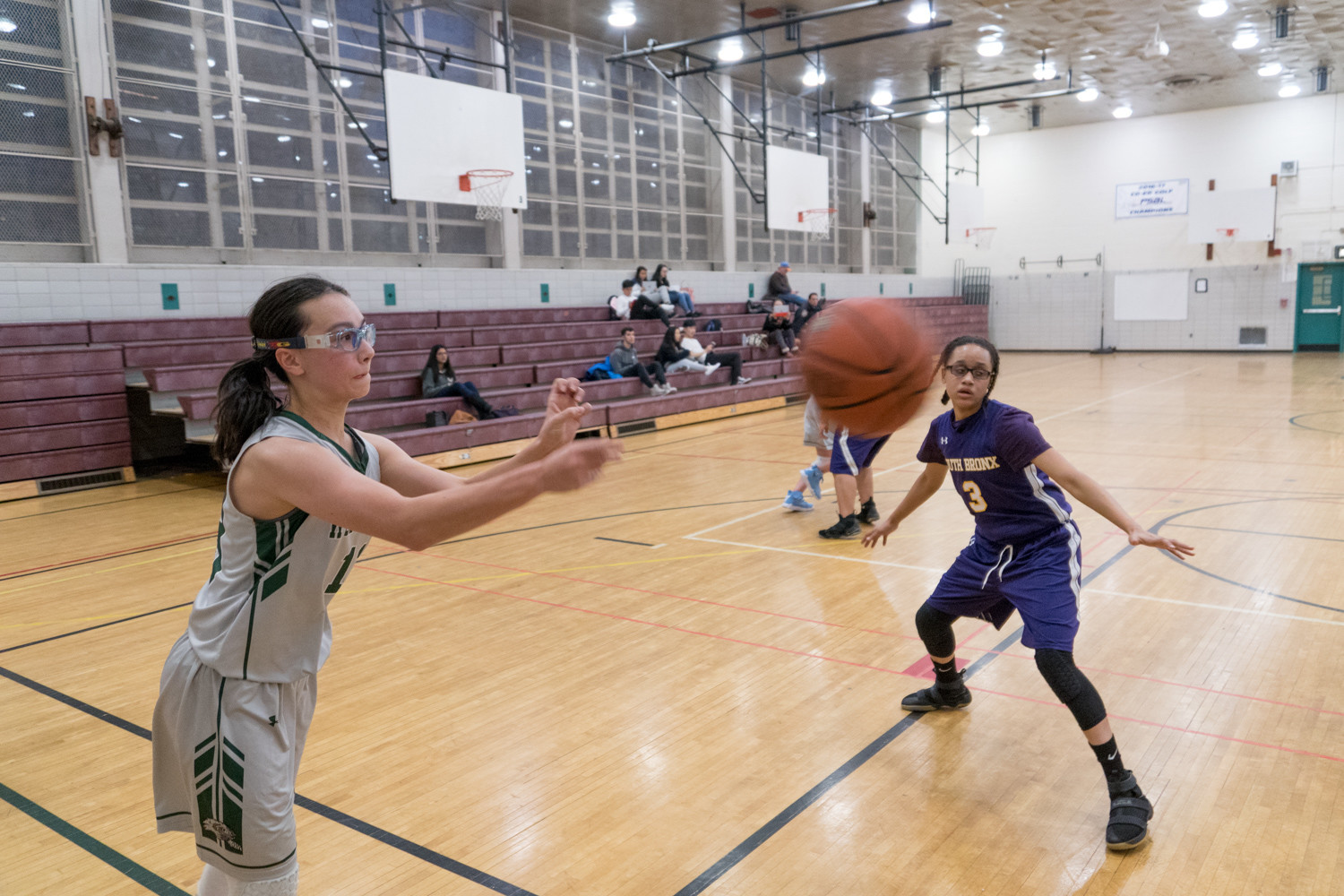 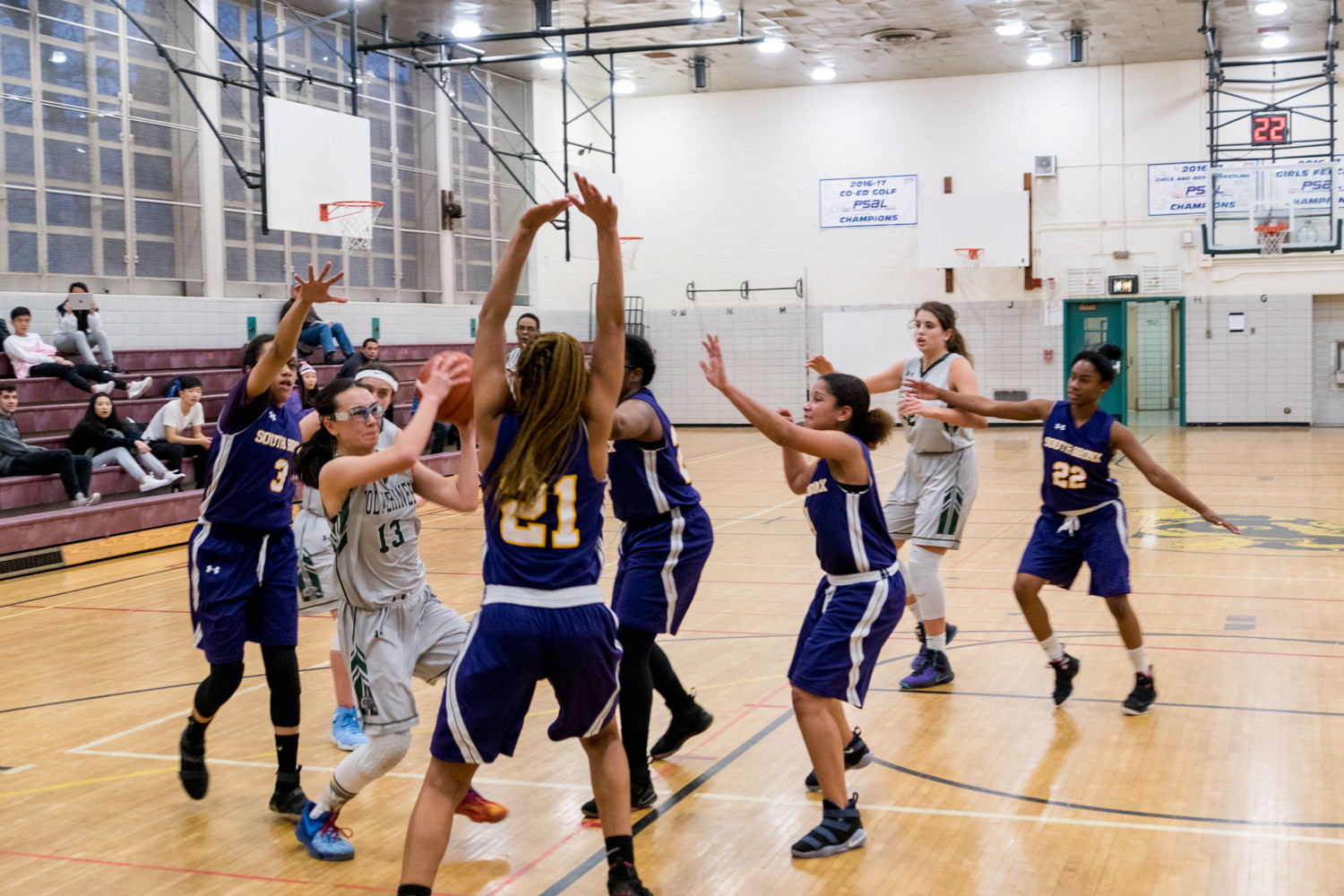 Sarang West is hard to miss once she takes the floor for Bronx Science.

The freshman guard is the Wolverine with one blue sneaker, one red, along with a pair of Steph Curry socks and a set of goggles that are vintage Kareem Abdul-Jabbar.

And that’s not to mention the pink headphones she wears in warm-ups prior to the game.

“It just kind of shows my personality because I’m weird,” West said with a wry smile.

But there is nothing weird about West’s game, especially now that she has stepped into a leadership role following an injury to stud freshman guard Carolina Lopez. And in Science’s first game without Lopez, the Wolverines didn’t miss a beat as West logged a game-high 17 points and Tiffany Chyke Okpuzor posted a double-double with 11 points and 15 rebounds as the Wolverines smoked South Bronx 51-22 last week.

The victory upped Science’s record to 10-1 on the season.

West, it should be noted, also had a hand — or some body part — in Lopez sustaining her injury.

“There was a loose ball in our game against Wings, and everybody else backed away from it,” West said. “But we’re both competitive and we both went for it and collided.”

The collision led to Lopez receiving several stitches on the bridge of her nose, causing her to miss the South Bronx game and perhaps a couple more upcoming contests.

“Optimistically she’ll be out a week, but realistically probably two,” Science head coach Mike Mei said. “So we’ll try and hold it down until she gets back.”

So far, so good in that department.

Science jumped out to a 12-5 lead after one quarter with West scoring eight points, before adding five more to give her team a 25-14 advantage at the half. The Wolverines then methodically pulled away from South Bronx in the third with a steal and layup by West opening up a 40-19 lead near the end of the period.

When Science senior Georgia McKay opened the fourth quarter with a three-point play, the Wolverines lead ballooned to 47-19, and it was time for South Bronx to warm up the buses for the ride home.

It’s that depth and contributions from up and down the roster that Mei is counting on to carry the Wolverines until Lopez returns.

“It will for a little while,” Mei said. “But we’re certainly going to need her for the stretch run, and that stretch run is actually pretty brutal. We have four or five games remaining against teams that I think are going to be in the playoffs.”

But until Lopez returns, Mei is excited to see what West can offer on the court.

“She’s coming along nicely,” Mei said. “Sarang, by nature, is a very creative type of ballplayer. So the challenge for me is to not stunt her creativity but still have her be creative within the flow of the offense. That is my biggest challenge this year.

“She can definitely go. She has a lot of skill, and once she figures it all out and she is able to apply her skills within the system, it’s going to be night and day. But this is a great opportunity for her.”

A good opportunity to get better, that is.

“Now everyone is going to have to work harder to fill in the gap because Carolina brings so much to the table for us,” West said.

“But I think can do a lot better. I think what I’ve shown so far isn’t what I can show fully.”

Science has pulled off two blowout victories since suffering its only loss of the season at Mott Haven just before the Christmas break. But even with Lopez expected to return soon — and with West, McKay, Del Deo, Chyke Okpuzor, Christina Satina, Brett Zakheim and others all upping their game — Mei is still not overly comfortable with where his Bronx A-South division-leading team is right now.

“I’d be lying if I said I felt great,” Mei said. “We have certainly been tested and there have been a lot more close games this year than last. But if nothing else, we’ve been tested in close games, and that goes a long way, because when you get to the playoffs, the games are close, and we’re going to need to know how to play under pressure.”