Without bus service, how will kids get to school? 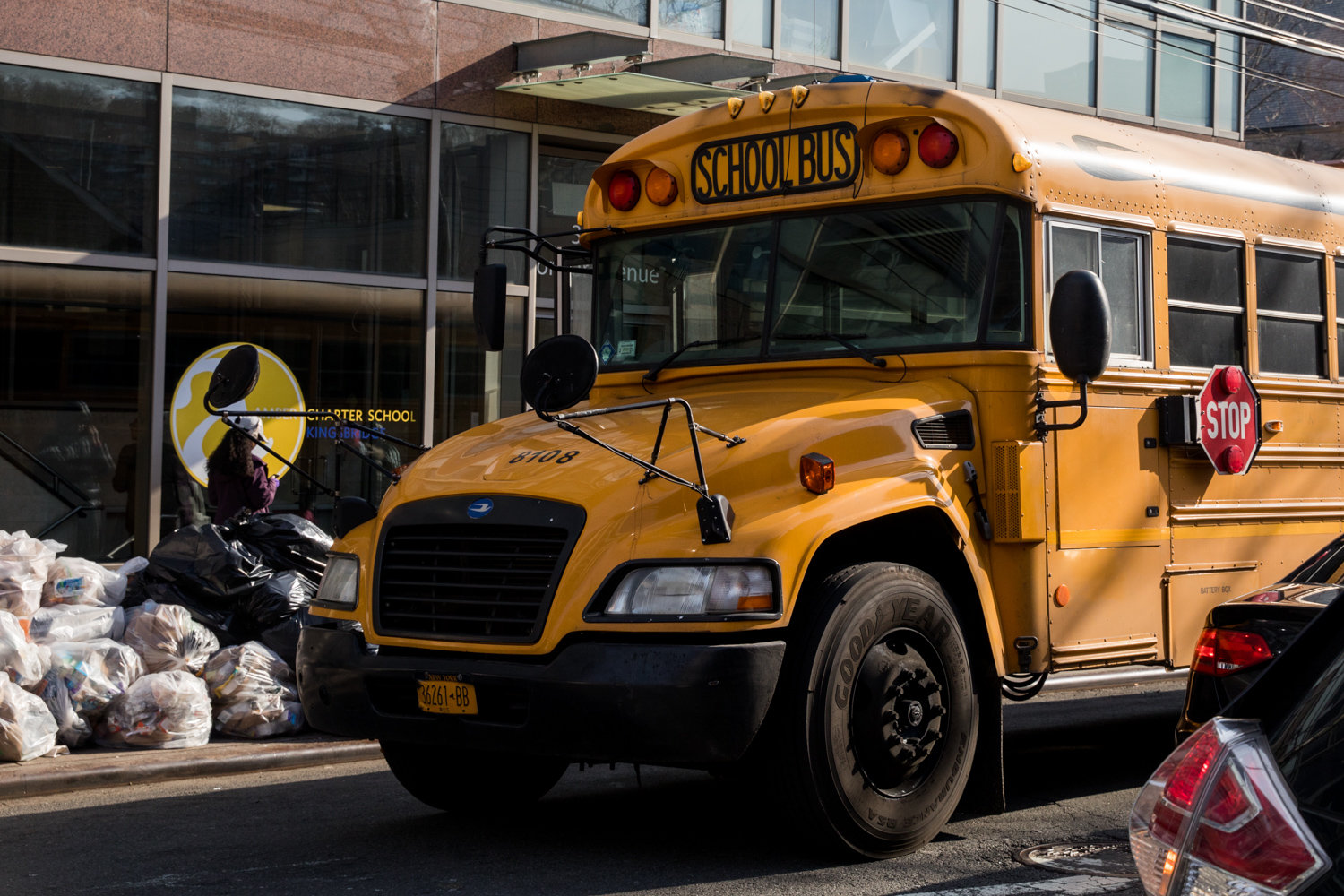 A school bus picks up students from Amber Charter School on Corlear Avenue. The school plans to end bus service this June, a change some parents aren’t happy about.
JULIUS CONSTANTINE MOTAL 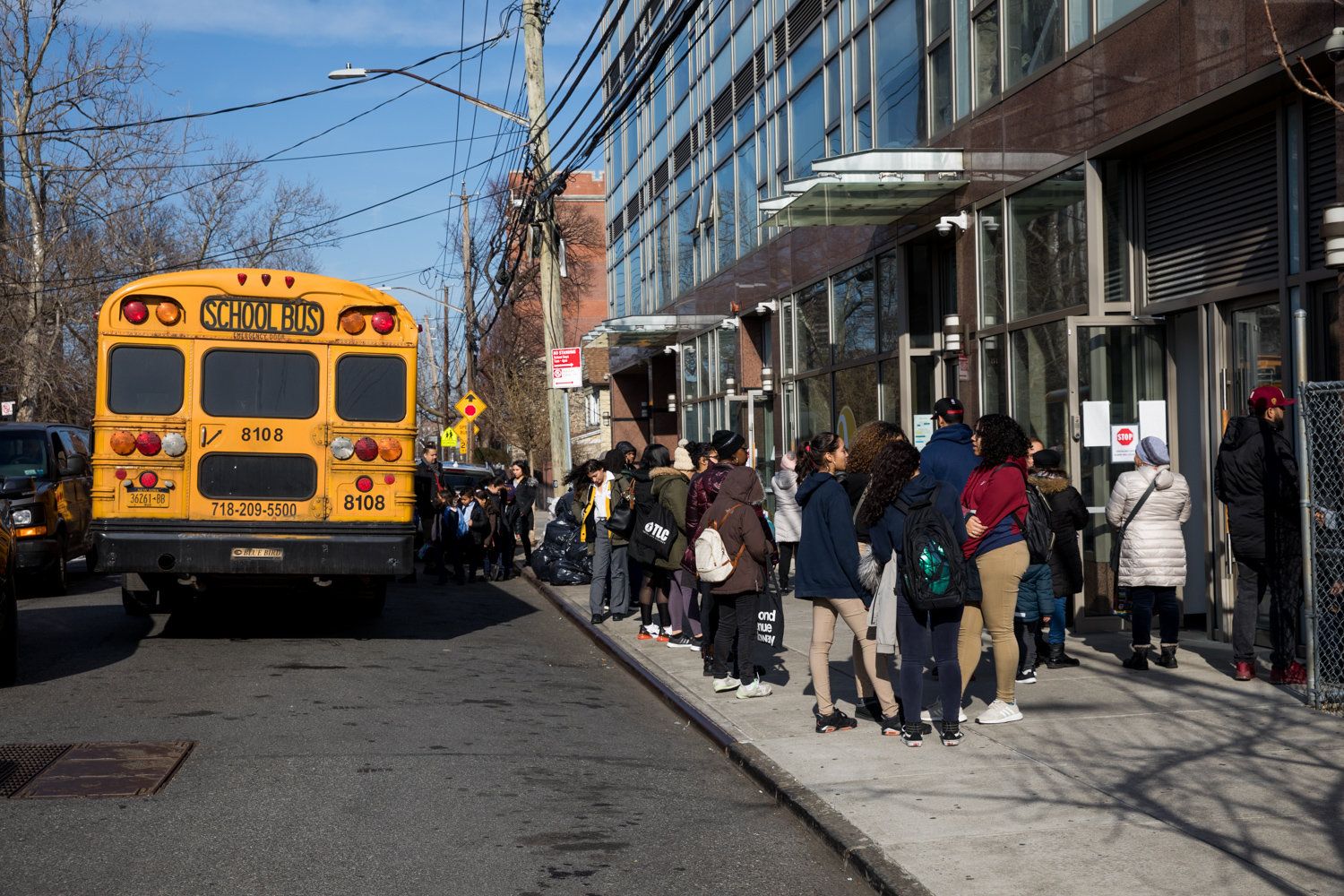 Parents wait to pick up their kids from Amber Charter School on Corlear Avenue while others board a school bus. Amber plans to discontinue bus service later this year, but some parents are hoping to change that.
JULIUS CONSTANTINE MOTAL 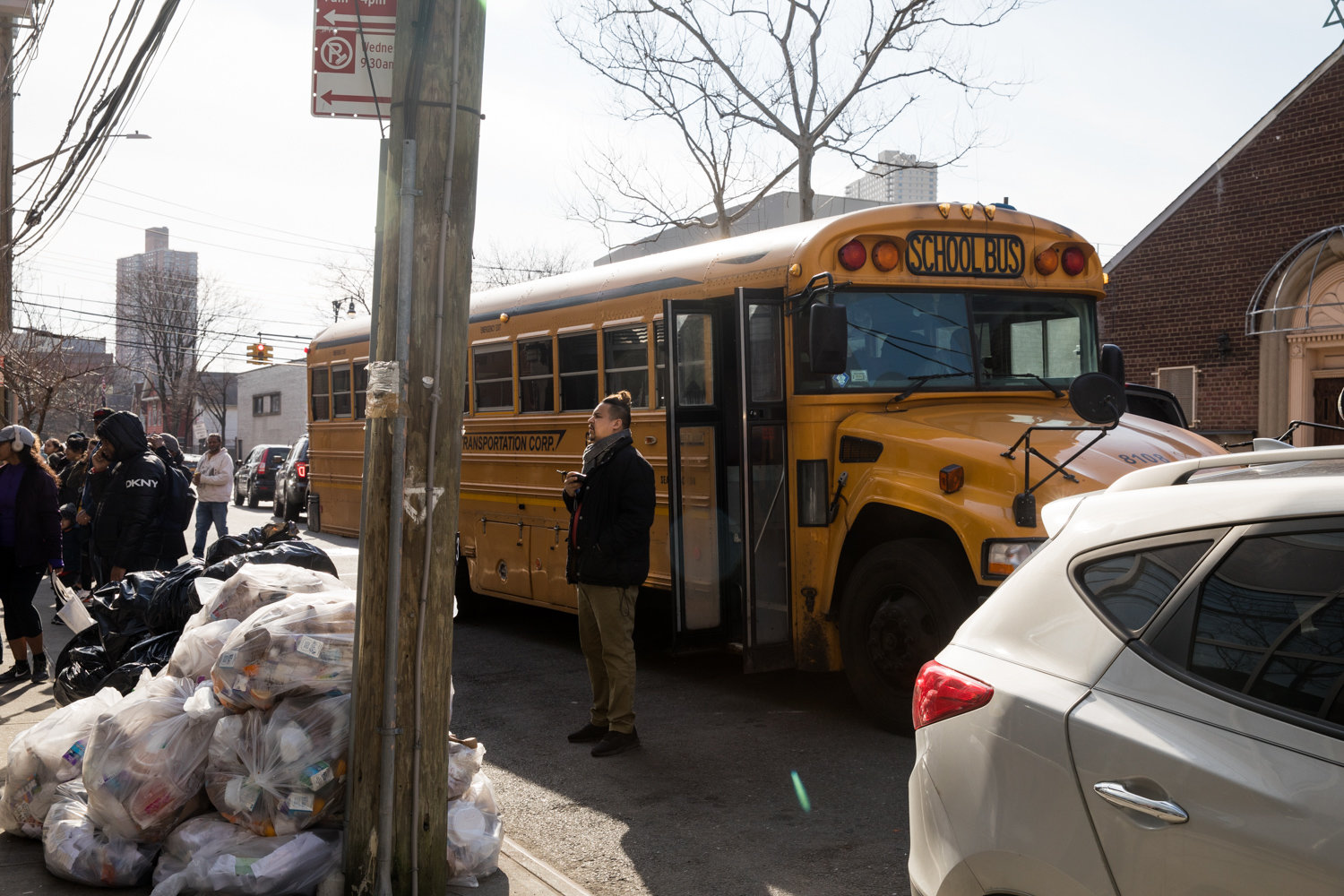 Amber Charter School students board a school bus, an activity that could soon be a thing of the past if administrators get their way. Some parents are fighting the school’s plan to discontinue bus service later this year.
JULIUS CONSTANTINE MOTAL 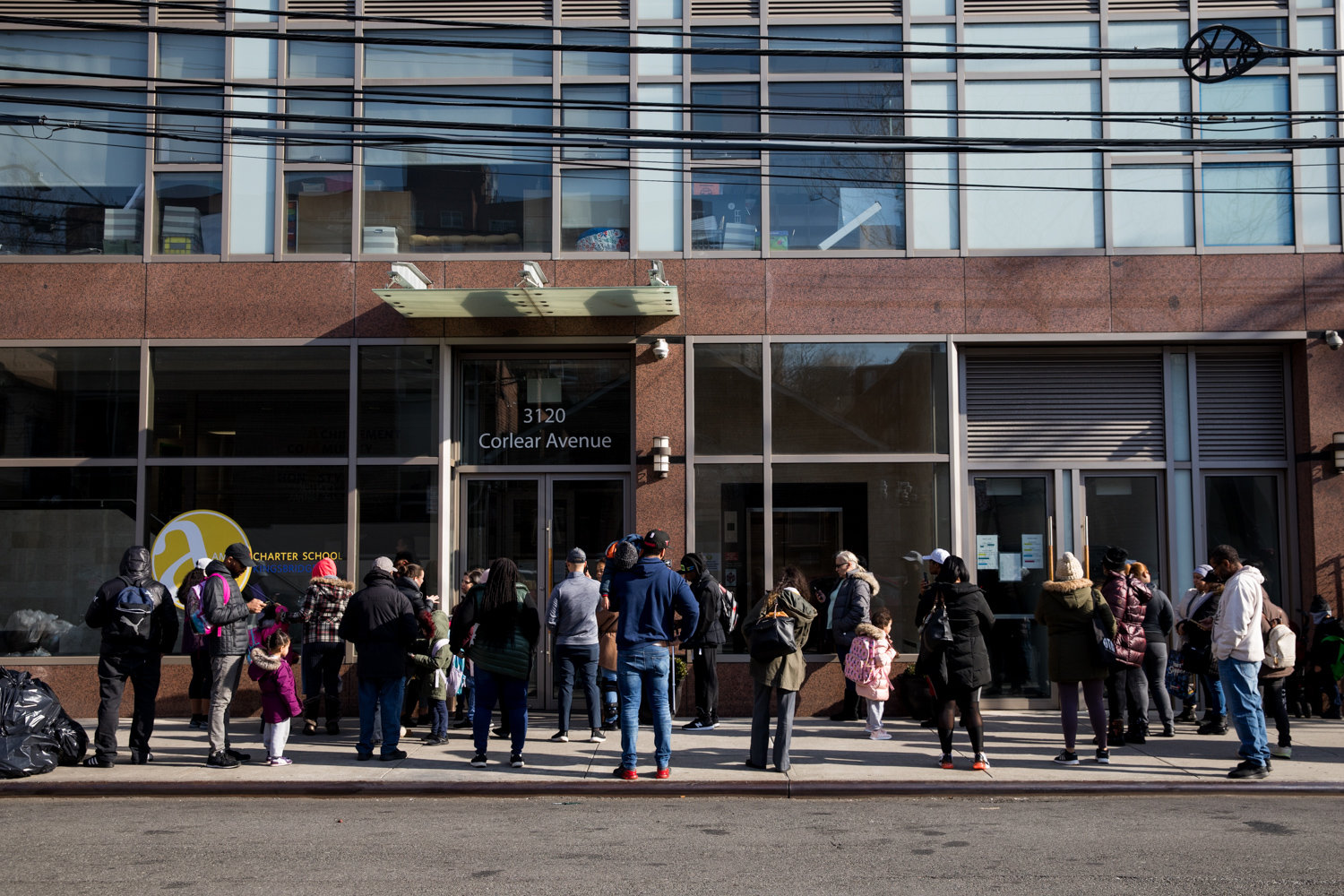 People wait to pick up students from Amber Charter School on Corlear Avenue. The school plans to discontinue bus service later this year, but some parents are hoping to change that.
JULIUS CONSTANTINE MOTAL 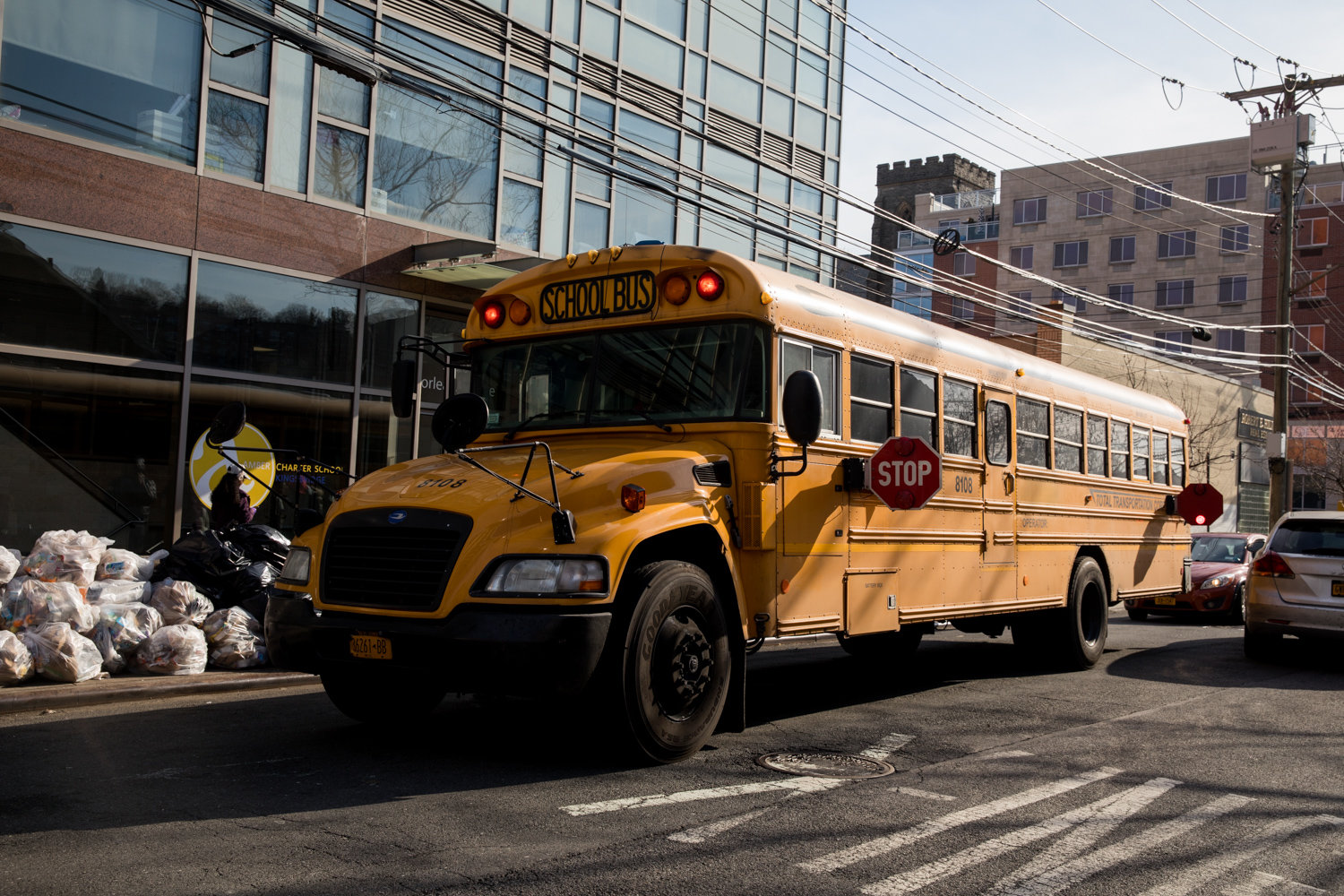 Parents may soon have to find alternative means of getting their children to school, if Amber Charter moves forward with plans to discontinue bus service.
JULIUS CONSTANTINE MOTAL
Previous Next
By KIRSTYN BRENDLEN

Getting to school can be a trip, whether it’s walking a few blocks to someplace like Riverdale/Kingsbridge Academy, or busing in from other towns — and even states — for institutions like Ethical Culture Fieldston School and Horace Mann.

Yet for some, getting to school starts in the most traditional way imaginable — boarding an iconic yellow school bus.

In city public schools, getting a seat on such a bus depends on a student’s age and distance from the school. Up to sixth grade, students living at least a half -mile from the school may be eligible for busing. Once they start middle school, it’s all about public transit from there, with many of those same students eligible for free MetroCards.

Private and charter schools, however, aren’t quite beholden to those rules. That’s something parents at Amber Charter School Kingsbridge on Corlear Avenue found out after learning the new school would end school bus service by the end of the current academic year.

In a letter sent to parents, school administrators note Amber had experienced “many difficulties” with its bus service before thanking parents for understanding its decision.

And that was it, according to one Amber parent, Wanda Maria. No further meetings were held to discuss changes with parents. And now that the end of busing is drawing near, she and other parents are fighting back against the change.

Maria took up her complaint with the SUNY Charter Schools Institute, the state body that has been responsible for granting schools like Amber their charters over the last two decades. The institute sent her concerns to Amber principal Veronica Almedina.

When reached by phone, Almedina cited safety concerns from the traffic around Amber during school drop-off and pick-ups, Maria said. Located on Corlear Avenue between West 231st and West 232nd streets, Amber’s neighborhood could be considered traffic-congested — especially with P.S. 7 Milton Fein School, P.S. 207, and St. John’s Academy all located just blocks away.

Amber school officials brought some of their traffic concerns to a May 2018 traffic and transportation committee meeting. According to meeting minutes of that Community Board 8 committee, Amber’s chief operations officer and general counsel Heidi Hamilton asked that parking be restricted on Corlear during school pick-ups and drop-offs. Cars parked along the curb forced buses to double-park, she said.

The city’s transportation department granted the request, preventing cars from parking along the curb at the beginning and end of the school day.

Of the more than 400 students who attend Amber, only about 60 or so students take the bus, Ganey said. There were more issues than simply traffic, however, Maria said. Almedina told her the school was having problems with students left on buses.

“They said there were two (children) left on the bus, sleeping,” Maria said. “I (asked), ‘Was this at dismissal or arrival?’ They said arrival.”

Ganey admits that some parents have reported their children missed their stop because they were sleeping. However, they were not ever left alone on the bus as the driver is required to sweep the vehicle before leaving to ensure no passengers are left behind.

Maria and some of her fellow parents plan to take the issue up during the March 18 traffic and transportation committee meeting, pushing for traffic-relieving measures that might convince the school to keep buses running. That meeting was scheduled to take place at Manhattan College, but after school officials there shut down the campus over COVID-19 concerns, it wasn’t clear at presstime where the meeting would be relocated to this month, if it happened at all.

Amber wouldn’t be the first school trying to alleviate traffic around its campus. P.S. 81 Robert J. Christen has struggled with traffic on Riverdale Avenue and West 256th Street for years, as buses and cars alike jostle for space to get students to and from school, while still making enough room for through-traffic to get by.

At a March 2019 meeting, P.S. 81 parents and principal Anne Kirrane joined officers from the 50th Precinct to discuss the traffic in front of the Riverdale Avenue school. Capt. Emilio Melendez said the precinct had issued 100 citations to traffic violators over the course of five months, and neighbors and parents alike complained about traffic and safety.

Proposed solutions included making West 256th a one-way street to prevent illegal left turns, or even making the entire area a “play street,” which would close the street to traffic entirely.

Neither of those requests panned out — and it’s unlikely that a request for a one-way would be granted, said traffic and transportation committee chair Dan Padernacht.

Those decisions have to be run past the city’s transportation department, and given the heavy traffic in the area, the need for outlets off Corlear would likely override the need for buses.

Maria was optimistic, though, and determined to find a way to keep the buses running.

“You cannot assume,” she said. “We can’t just assume and not try it. You never know until you try.”