Wolverines get ‘physical’ in playoff win over Jefferson 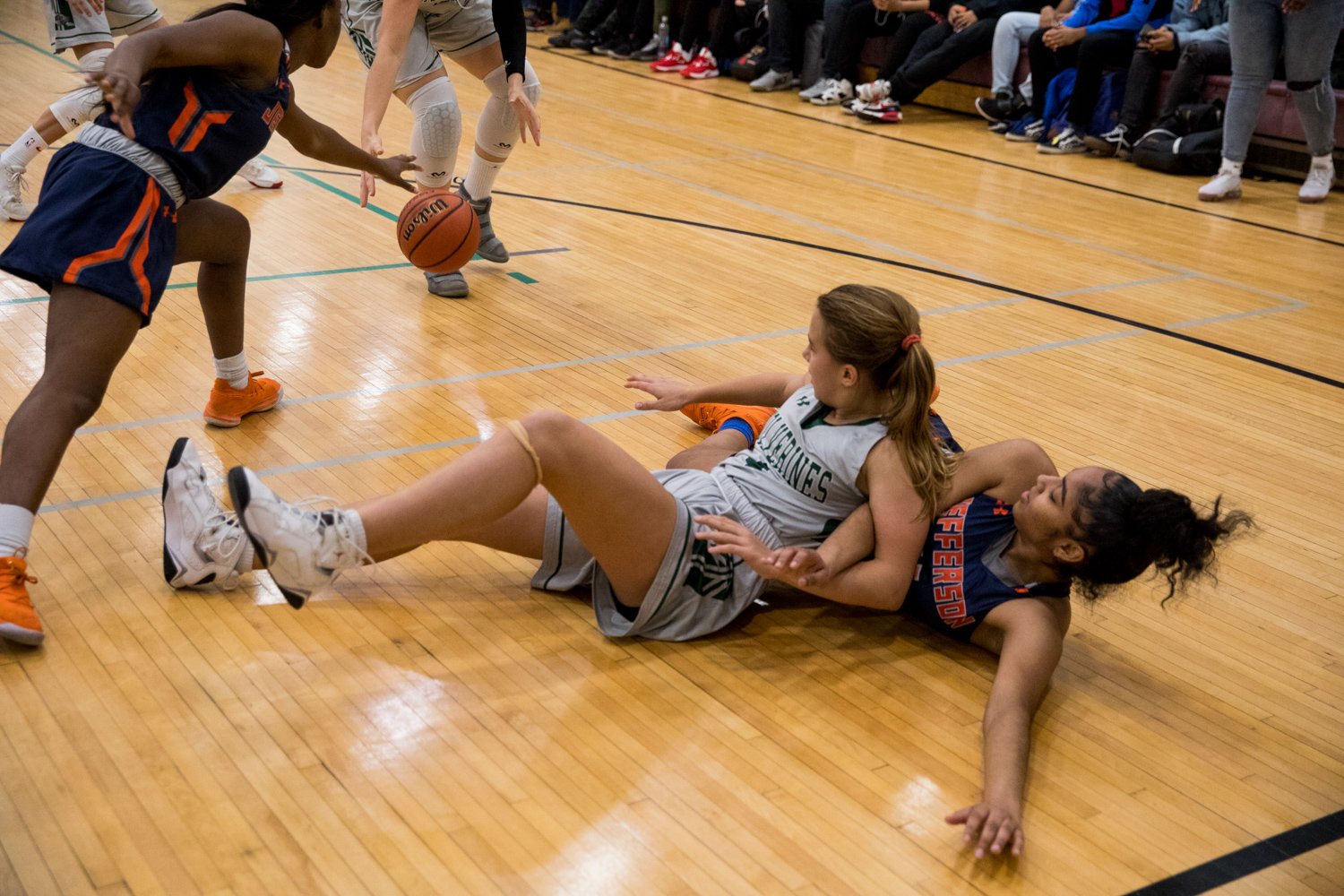 Bronx Science’s Lillian Flynn hits the floor to battle for a loose ball during the Wolverines’ 41-34 victory over Jefferson in a PSAL playoff game last week.
JULIUS CONSTANTINE MOTAL 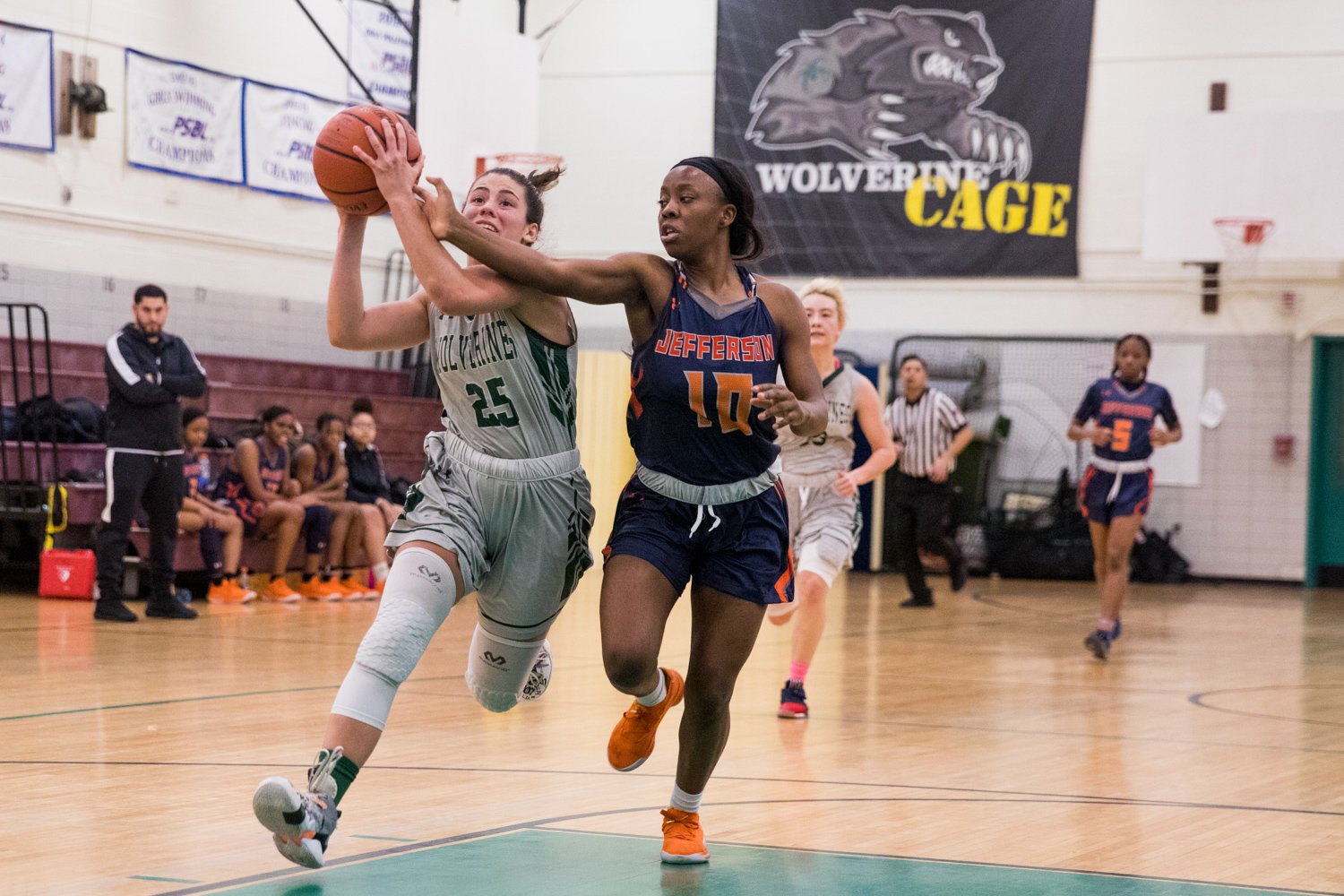 The Wolverines’ junior gems have been on the victorious end of 50 of 56 games in their careers, posting a near-flawless 33-1 home record, winning two Bronx A South Division titles.  And, shortly they’ll make their second appearance in the quarterfinal round of the Public School Athletic League playoffs.

Despite all that success, the one thing that has irritated West and Lopez was the Wolverines’ view from outside their program. They were looked at as being soft, of not being able to match up with the more physical teams in the league. And it was that perceived lack of toughness that would ultimately be the Wolverines’ undoing in the postseason.

Well, you might want to consult Jefferson High School to get their thoughts on the Wolverines’ timid style of play.

In their PSAL second-round playoff game last week, the Wolverines and Orange Wave engaged in what looked more like a UFC match than a basketball game as players from both teams spent as much time grappling on the floor for loose balls as they did battling under the boards for rebounds. The game was so physical that one Jefferson player, Seraiah Dawson, took a hard spill going up for a layup, spending the next 15 minutes on the floor in pain before leaving the game — and the gym — in a wheelchair.

And when the final horn sounded and both teams were left to count their scrapes and floor burns, Bronx Science was the one left standing, pulling out a bruising 41-34 victory to advance to the PSAL quarterfinals.

West, who led all scorers with 17 points, agreed the Wolverines needed to post a win against a physical team like Jefferson.

“People come into our gym and they see our team and assume that we’re not that tough, we’re not that hard,” West said. “So this was good for us because we finally got to face an aggressive team. And I think it was a really good experience for a bunch of us since a lot of us don’t have playoff experience.”

The Wolverines’ won’t-back-down attitude worked for them right from the opening tip. Lopez got things started by scoring seven of Science’s first nine points as the Wolverines’ held a three-point lead after the first quarter. Then West joined the scoring party with six points in the second period as Science built an 18-13 lead at the half.

One moment early in the third quarter epitomized Science’s gritty play when no less than three Wolverines’ players hit the deck to recover a loose ball that ultimately found its way into West’s hands for a basket that jump-started an 8-0 Wolverines’ run. That led to a 26-15 lead.

“We knew right from the start that they were going to press us really hard, so we were prepared for that,” said Lopez, who finished with 16 points. “Nothing else caught us off guard, and we were able to control the tempo throughout the game.”

Science held a 33-23 advantage when Dawson went down with her injury. And when the game eventually resumed, the Wolverines used a 7-2 run capped by a West three-pointer to build a 40-25 advantage with 3:02 to play. And Jefferson was done.

“I think our team is pretty tough,” Lopez said. “We might not look like it, but all of us can take a punch and throw one, too, and it showed in this game. They were basically tackling us, and the refs weren’t calling (fouls). But we were able to just go straight back at them.”

The fourth-seeded Wolverines are off now until March 10 when they will host No. 12 New Dorp. Science is 11-0 at home this season, but will have to devise a way to stop one of the PSAL’s top players in Sydney Gomes, who is averaging 37 points and 24 rebounds in her two playoff games this season.

“She’s one of the top two or three players in the city,” Mei said. “She is a monster. She scored 49 points in the first round, so our defense will be tested. But I think even with her we can hold up. The only question is will we have enough points on the board at the end?”