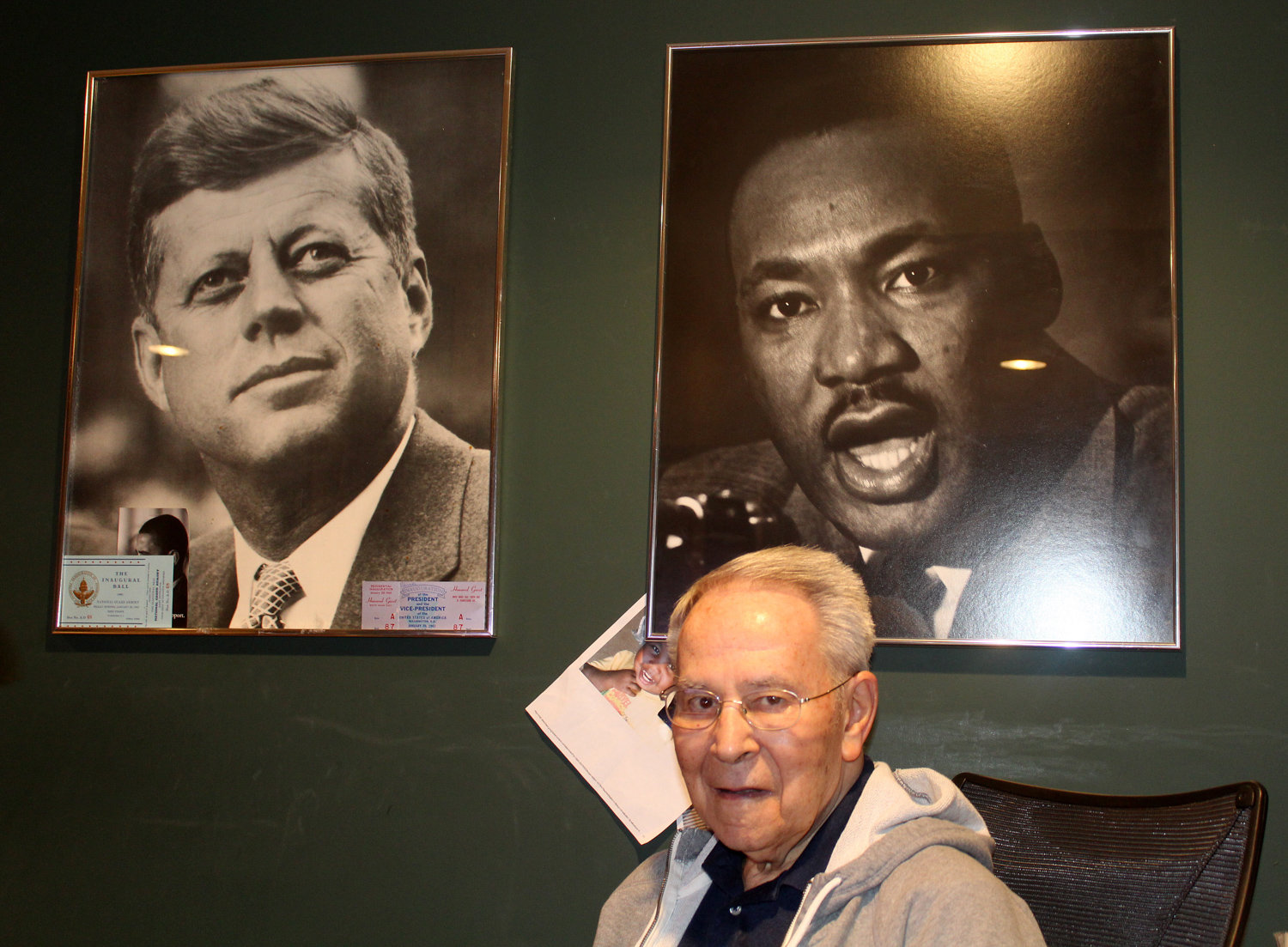 Woody Klein — an Ethical Culture Fieldston School grad, one-time Riverdale Press reporter, and press secretary under Mayor John Lindsay — sits at his desk at his Westport, Connecticut, home soon after retiring as columnist of the Westport News. He died Feb. 11 at 90.
Courtesy of Sarah Vaughan/Hearst Connected Media
By MICHAEL HINMAN

Not long after Mayor John Lindsay gave his first inaugural address on Jan. 1, 1966, his press secretary — Woody Klein — walked into his new office at City Hall, and found that his predecessor had left a book for him on the red mahogany desk, a replica of the writing table George Washington used when he served as president in New York City.

The book was Niccolò di Bernardo dei Machiavelli’s “The Prince.”

“A piece of paper had been inserted in it, which caught my eye,” Klein would later remember in a 2015 column he wrote for Westport News in Connecticut. “Underlined appropriately was the following passage: ‘There is nothing more difficult to take in hand, more precarious to conduct, or more uncertain in its success, than to take the lead in the introduction of a new order of things.’”

Lindsay was the mayor who set himself up to create a new order — whether it was a good order, or one that future mayors had to clean up, that’s something historians can debate. Klein, however, was a true representative of Riverdale his entire life. From his days growing up going to school at Ethical Culture Fieldston School, to one of his first commercial newspaper jobs as a reporter here in the earliest days of The Riverdale Press, to his later career as an editor and columnist for a popular community newspaper in Westport, Klein seemed to always take the lead in introducing a new order.

Klein, born Elihu Klein, wrote a regular column for Westport News called “Out of the Woods,” which he began in 1992 after taking over as editor, and continued even after his 1998 retirement. It was the culmination of a busy career that began on the ground of Ethical Culture Fieldston as co-editor of The Fieldston News. He credited that school paper with lighting the fire that would become his life.

“I never had to make a decision about what to do with my life,” Klein told writer Joshua Baldwin, a 2002 graduate of Ethical Culture Fieldston, in an undated story about the school’s newspaper. “The Fieldston News launched my 65-year career as a journalist. I owe my entire career to The Fieldston News.”

Klein would graduate from Fieldston in 1947, heading on to Dartmouth College in New Hampshire to study sociology, before picking up his master’s degree from the Columbia University Graduate School of Journalism in 1952. While he wrote for publications like the Daily Dartmouth and even for The Associated Press, Klein would jump into military service, according to the Westport News, working primarily with the U.S. Army Corps of Engineers, until being discharged in 1961 as a first lieutenant.

By then he was ready to get back into newspapers, first with The Daily Argus in Mount Vernon, and later for The Washington Post and the New York World Telegram & Sun.

Klein’s work at the World-Telegram & Sun was extensive, according to the Westport News, with a focus on poverty, housing and civil rights. He even had an hour-long sit-down interview with Dr. Martin Luther King Jr., in 1965.

One fan of his work there would be James Lomuscio, who would succeed him as editor of the Westport News in the late 1990s.

“When I replaced him as editor, he said the paper’s audience would include a lot of high-powered movers and shakers, and that out stories in some way might influence the makers,” Lomuscio wrote in a remembrance piece published by his old newspaper. “’It doesn’t matter to me whether I write for a big newspaper or a hometown one,’ he said. ‘It’s just as important, important that I write.’”

Klein joined Lindsay’s office in the 1960s, and later wrote a book about the experience: “Lindsay’s Promise: The Dream that Failed.”

After that, he ended up as a communications executive with IBM, where he spent 24 years. The last six of them were as editor of the technology’s company magazine, Think.

Books were a passion of Klein’s, not just to talk about Mayor Lindsay, but to write about anything he could. His 1964 book “Let in the Sun” expanded his World-Telegram & Sun newspaper series on poverty, according to the Westport News.

He also wrote books about history, including a 2008 book chronicling White House press secretaries spanning from Franklin D. Roosevelt to George W. Bush. He even wrote a history book about Westport, an affluent city of about 25,000 people just east of Norwalk.

Elihu “Woody” Klein is survived by his wife Audrey and daughter Wendy, as well as several nieces and nephews. A prayer service was held at Harding Funeral Home in Westport on Feb. 14, with burial following at nearby Willowbrook Cemetery later that day.