World of bioluminescence keeps getting bigger and bigger 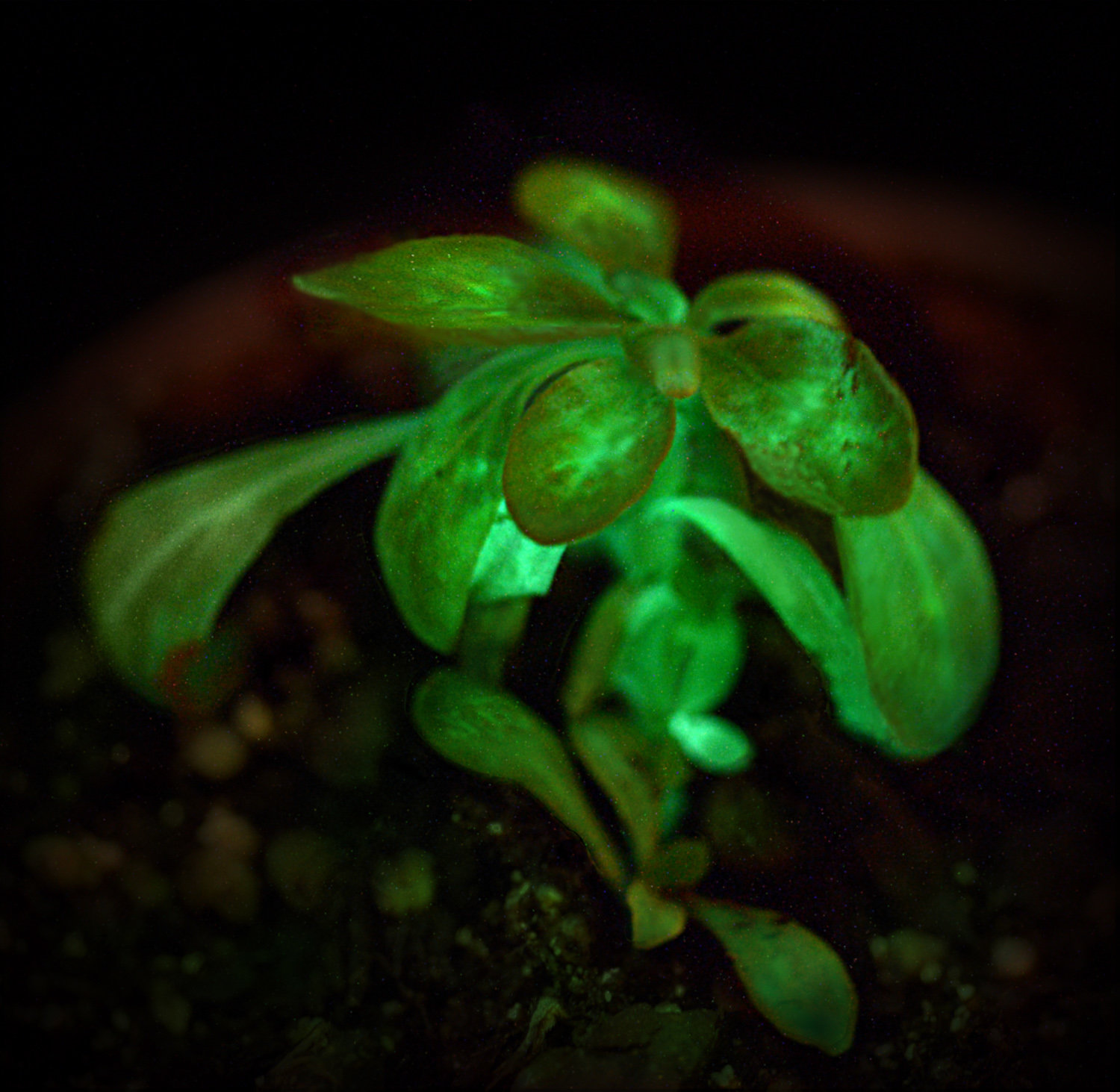 Although they’re no longer being created for purchase, one company called BioGlow one marketed a potted nicotine plant that could glow in the dark.
Courtesy of Alex Krichevsky / Bi
By SURA JESELSOHN

In a recent Green Scene column, I indicated that there were relatively few luciferins — organisms like fireflies that like to glow — that exist in our environment. In fact, there are only four main ones.

Luciferases, however, are much more numerous. For example, while all firefly luciferins are the same, Thermo Fisher Scientific sells six different luciferases, specific to genus and even species level.

Steve Haddock, senior scientist at the Monterey Bay Aquarium Research Institute in California, is a recognized expert on bioluminescent  marine organisms. He has suggested that bioluminescence has evolved independently between 40 and 50 times over evolutionary history based on the multiplicity of luciferases.

The suggested modality for acquiring bioluminescence would be initially triggered through ingestion of luciferins from other organisms, with the subsequent development of each organism’s own unique luciferase enzyme. The eventual integration of the luciferin genes were probably accomplished by horizontal gene transfer, which is material for another time.

In any case, bioluminescence is an important biological ability demonstrated by the fact that ray-finned fish (those in which the fins are fleshy webs of skin supported by bony spines) from 150 million years ago in the early Cretaceous period already indicate bioluminescent capacity. There is the further possibility that it is a considerably more ancient phenomenon since ostracods, which are bioluminescent today, derive from a 400 million-year-old lineage.

Like most biological systems, bioluminescence is far more complicated than a seemingly simple luciferin-luciferase reaction. For example, the jellyfish Aequorea victoria (phylum Cnidaria) contains a photoprotein (instead of a luciferin), that in the presence of calcium ions, produces a flash of blue light that is then converted to a green light by green fluorescent protein, also present in the Aequorea. This process combines luminescence created by the photoprotein and fluorescence contributed by the green fluorescent protein.

All of these reactions take place only in the presence of light in the blue to ultraviolet range. In this case, the bioluminescence takes place only around the rim of the jellyfish’s “bell,” and its purpose is unclear since they do not glow continuously in the water, nor seem to signal to each other.

Where are all these reactions taking place? Although fungi do not have specialized cells, most organisms such as jellyfish, insects and fish have photocytes, specialized cells usually occurring in epithelial (skin) tissue. They contain special structures, including three types of granules, and can act alone or in aggregates as part of a larger and more complex structure called “photophores.” These can include reflectors, lenses, filters and shutters.

These structures allow the organism exquisite control over the direction and color of the light, as well as its intensity.

Despite our experience of bioluminescence through fireflies, the bulk of bioluminescent organisms live in oceans. Haddock estimates that 90 percent of the fish and crustacean species — and at least that percentage of jellyfish — living at depths between 330 feet and 3,200 feet have bioluminescent abilities.

However, the purpose of bioluminescence in many cases is obscure. Yes, fireflies are signaling prospective mates and anglerfish have a dangling lure growing from the top of their heads that attract prey. Some suggest that toxic bioluminescent insect larvae (glow worms) are warning off predators. The suggestion that I find most intriguing among marine organisms is the phenomenon of counter-illumination.

To explain counter-illumination, one must imagine being in the water below another organism. Seen from below, the overhead organism will appear considerably darker compared to the surrounding water and thereby become more visible to predators. To protect itself, the prey animal — whose photophores are on its underside — adjusts the amount of light on the underside to align with the amount of light from above, thereby producing a certain amount of invisibility.

Two other marine camouflage methods are body transparency and counter-shading. The latter uses pigments such as melanin to make the underside of an animal lighter than the upper surface, thereby changing the perception of lower-swimming animals about the three-dimensionality of the upper fish. This strategy has been present across animal phyla since the Cretaceous period.

But all of the above does not reckon with human ingenuity. I first became specifically interested in this topic when I saw an article about the bioengineering company BioGlow that was selling luminescent Nicotiana (tobacco) plants based on the work of Alexander Krichevsky. The genes for bioluminescence derived from bioluminescent bacteria were added to the genome of the plants, which were then available for purchase by the public.

The light has been likened to starlight because of its faintness.

Sadly the company could not attain financial viability, and plants are no longer available.

In the meanwhile, I discovered that one can create fluorescence in cut white flowers. By adding fluorescent ink at a ratio of 10 drops of ink to one ounce of water from a hi-liner into a small vase that has three ounces of water, which the flowers will suck up quickly, the flowers will glow under UV light.

And for your fish enthusiasts there is a bioengineered fish series (GloFish) including barbs, sharks, tetras and zebra fish that are fluorescent under blue light illumination.

Hope you have enjoyed the journey!