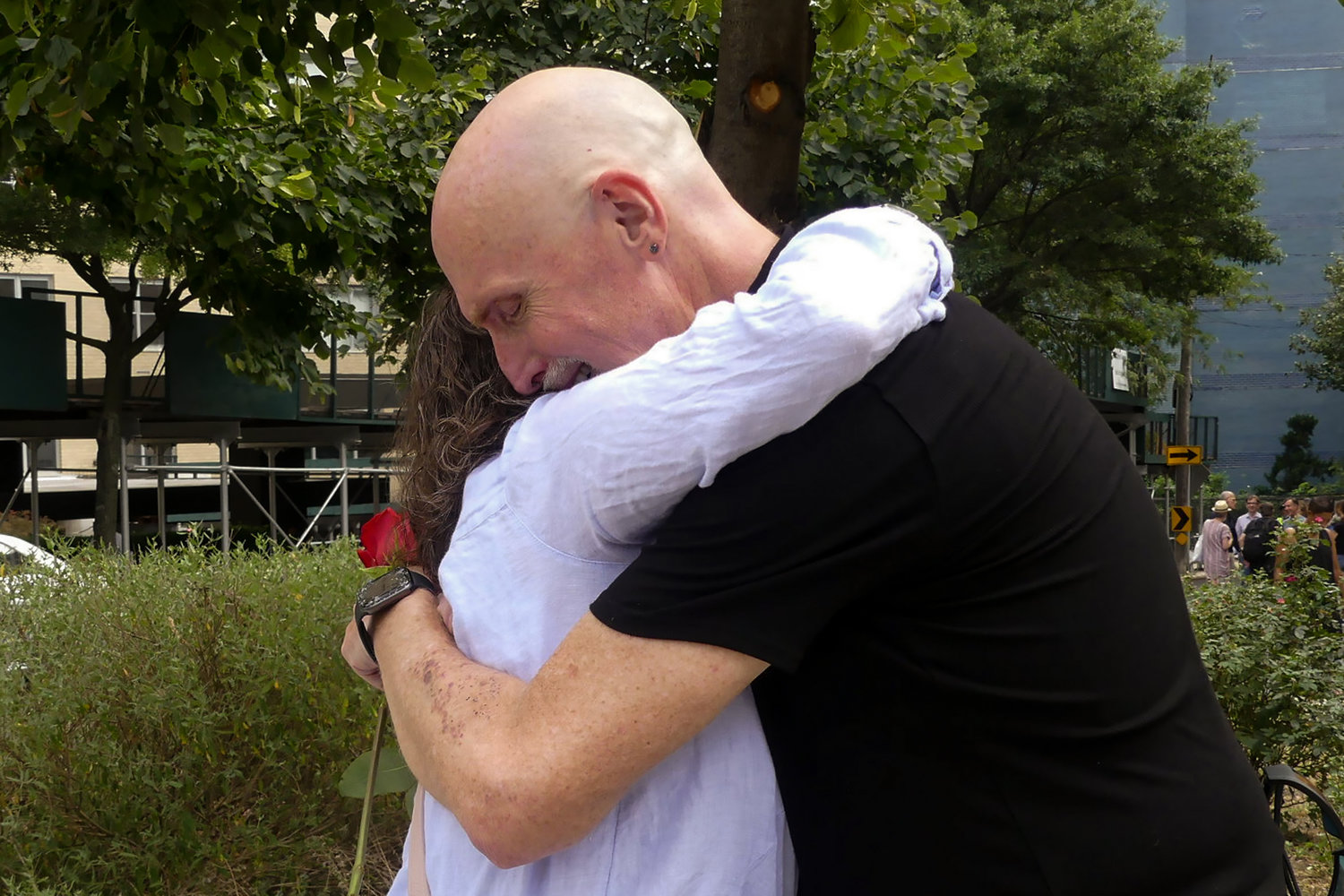 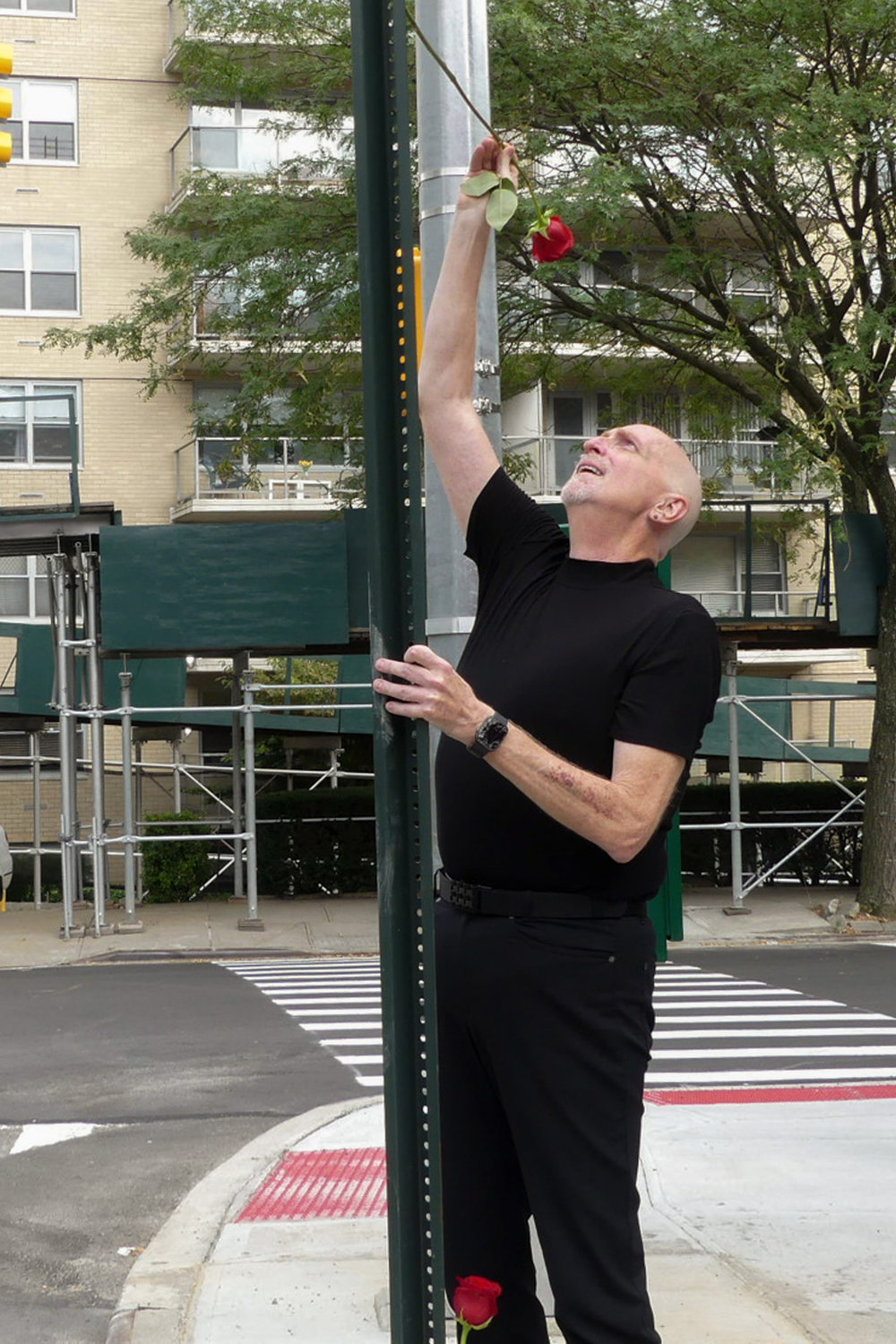 Jim Bradley places a rose in memory of Ruth Mullen at the corner of Johnson and Kappock in Riverdale, NY on Septmeber 4, 2022.
Aissa Sissoho 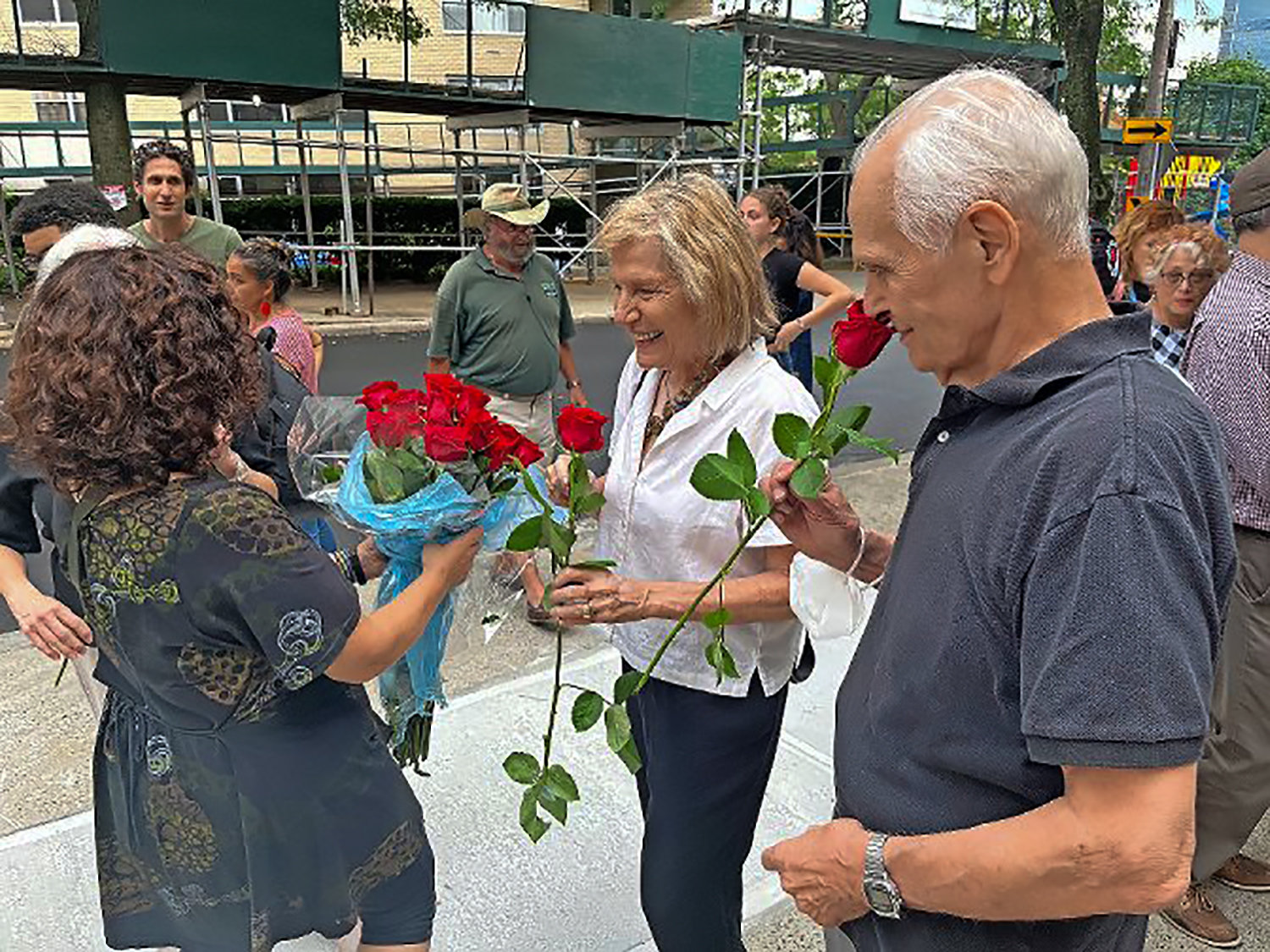 Jude Tuber, a first assistant director on the 1987 John Malkovich film ‘Making Mr. Right,’ smells a rose intended to honor his late friend and colleague, Ruth Mullen, who was killed last year while crossing at the intersection of Kappock Street and Johnson Avenue just a few yards away,
Michael Hinman
Previous Next
By Michael Hinman

Outside of family, friends and some colleagues, Ruth Mullen wasn’t that well-known in her Spuyten Duyvil neighborhood. Sure, some might walk by her and get a warm smile — but Ruth was someone who generally kept to herself.

That is, until November 2016, when Donald Trump was elected President of the United States.

“She cried every day for months,” remembers her husband, Jim Bradley. “I mean, I’m not exaggerating. She cried every day. And then she just got pissed off. She said, ‘OK, well, I need to up the ante,’ and so she started to look for like-minded people.”

That led Ruth to the Riverdale Huddle — the very group of like-minded women she had sought — and from there, she pushed to elect progressive candidates from Alessandra Biaggi in the state senate, to Jamaal Bowman in the U.S. House. If it was political and involved greater Riverdale, Ruth wasn’t just there, she was its heartbeat.

No longer was Ruth Mullen that friendly, almost anonymous smile from a passerby. People knew Ruth, and Ruth knew people. She even got to turn those tears of despair in 2016 to tears of happiness in 2020 when Joe Biden defeated Trump and planned to move into the White House.

But all of that was cut short on Sept. 7, 2021. Ruth Mullen was crossing the road in front of her home where Kappock Street and Johnson Avenue meet. She never had a chance against the express bus that hit her. Ruth had spent years pushing for a traffic light on this oddly designed intersection, and even quipped that someone would have to be killed before it ever happened.

Julie Price met Ruth Mullen when they were barely 18, in the hallways of their Colorado College dormitory. Ruth would blast Bob Dylan from her room, which was just enough to convince the shy Julie to say hello.

“We would talk for endless hours and go to meals, and one thing led to another,” Julie said. “She really became, what’s in today’s lingo, she was my person.”

The two were inseparable, with Ruth helping pull Julie out of her shell simply by being Ruth. They would cut class to watch the Watergate hearings. They snuck into the Denver show of gold medal figure skater Dorothy Hamill, looking for empty seats, and moving once they saw someone coming with tickets in-hand.

Ruth even convinced Julie to keep some of the jokes she had written into a college paper about German parliamentary elections before World War I.

“Ruth’s typing along, and I’m like, ‘You can take that out,’” Julie said. “She’s like, ‘No, no. Leave that in. It’s funny.’ And the amazing thing is, she was right. When I got my papers back, I got these positive comments about the jokes.”

That interaction foreshadowed Ruth’s career in publishing — work that many of her friends didn’t even know about. In fact, it was that very type of work that brought her to this part of the Bronx in the first place. That, and, well Donald Trump.

Ruth had met Tony Schwartz, a Riverdale-based journalist in publications like Newsweek and The New York Times. He had started work on a book about a real estate developer few outside of Manhattan had heard of at that point.

Schwartz “got the opportunity to write a book about Donald Trump, then just a blip on the horizon in New York,” Jim said. “He was kind of infamous, and Ruth told him not to do it. She worked on ‘The Art of the Deal’ for two years. She’s mentioned in the credits. And she was there with Trump in that, you know, that horror show of his office.

“I tell that because it’s just another weird, synchronous thing. But in a weird way, that’s how we ended up in Riverdale. She, at one point, housesat for Tony Schwartz, and fell in love with the neighborhood.”

‘No time for complacency’

Jim met Ruth in 1989 while she was pursuing another aspect of her career few of her Riverdale friends ever knew about — the movies. It was a comedy called “Coup de Ville” starring Patrick Dempsey.

By this time, Ruth had found her way onto film sets as a researcher and a production assistant. She had already worked on the Susan Seidelman classic “Desperately Seeking Susan” with Rosanna Arquette and Madonna. And she even appeared on camera on another Seidelman film, “Making Mr. Right.”

“They somehow talked Ruth into a cameo as ‘Reporter No. 3’ — something that is totally out of her character,” Jim said. “So, she had this back and forth with John Malkovich in that movie. We would get residual checks from Orion for like $19 for years, until Orion went bankrupt.”

Yet so much of these parts of Ruth’s life were a mystery to the new friends she met and worked with in recent years. Instead, they got to know Ruth as Ruth, without any of the rest of it. They knew Jim. They knew their daughters, Lia and Maya.

And especially for the Riverdale Huddle — now renamed in Ruth’s memory — that’s all that matters.

“She took a genuine interest in each of us,” Elizabeth Cooke-Levy told the crowd near Ruth’s traffic light. “She was a good listener. She would remember what other people in the group said a week ago, two weeks ago. She was respectful of other people’s opinions — even the ones she disagreed with.”

That’s how Jim Bradley hopes the community remembers his beloved wife — in ways that ultimately make a difference. To make change. To make life better. Whether it’s through elected leaders, or treating children’s pajamas with flame-retardant, or even installing a traffic light at a troubled intersection.

“There is no time for complacency,” said Chelsea Mullen, Ruth’s niece. “And if you cannot do the urgent work that needs to be done, then move over and support those who are ready to do it. What is at stake is nothing more — and nothing less — than human lives.”