You can get off the hook — just fork over cash 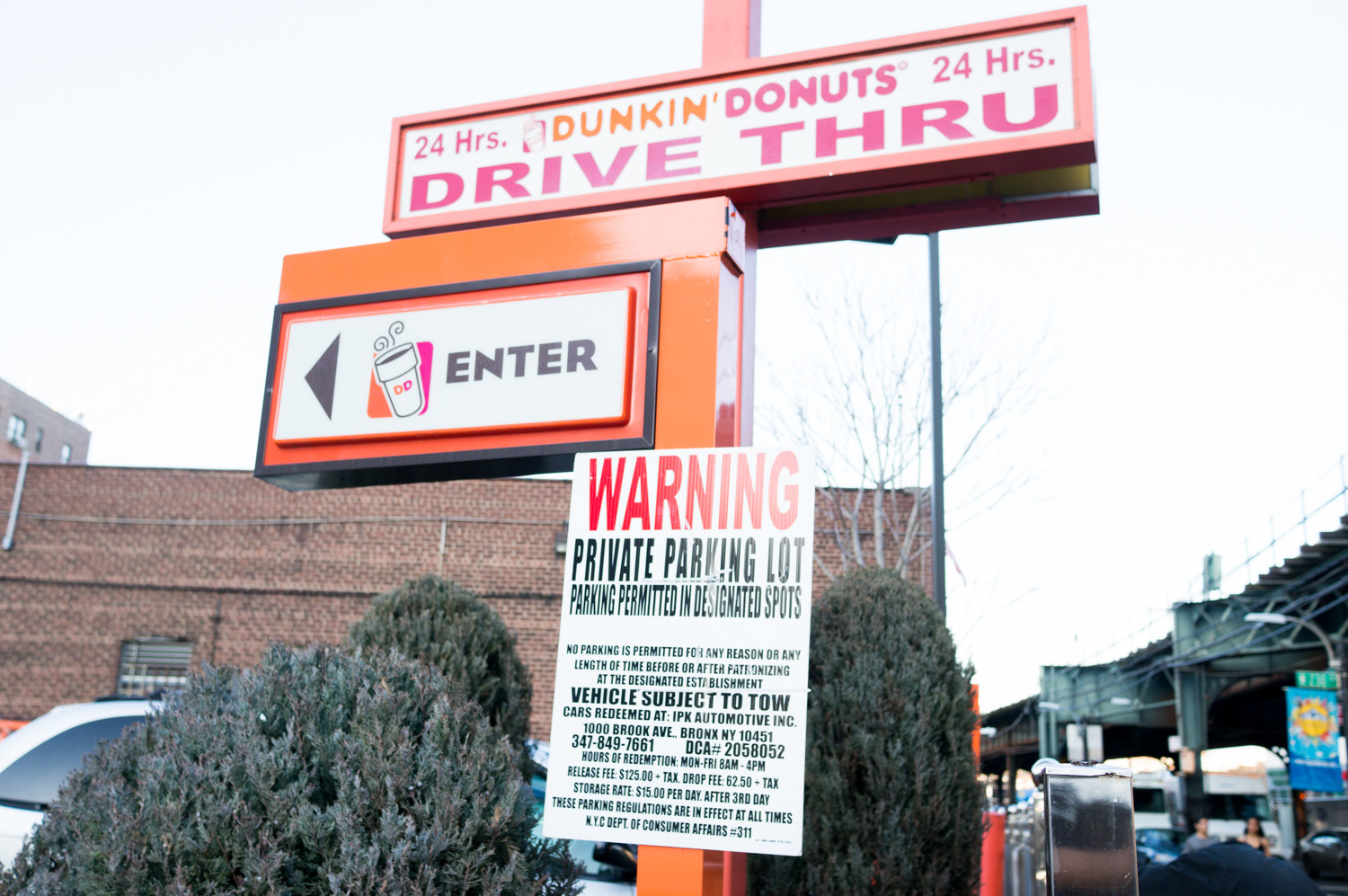 A sign posted at the entrance to the Dunkin’ Donuts parking lot at West 230th Street and Broadway informs drivers their cars will be towed if they park there and go anywhere other than Dunkin’.
JULIUS CONSTANTINE MOTAL 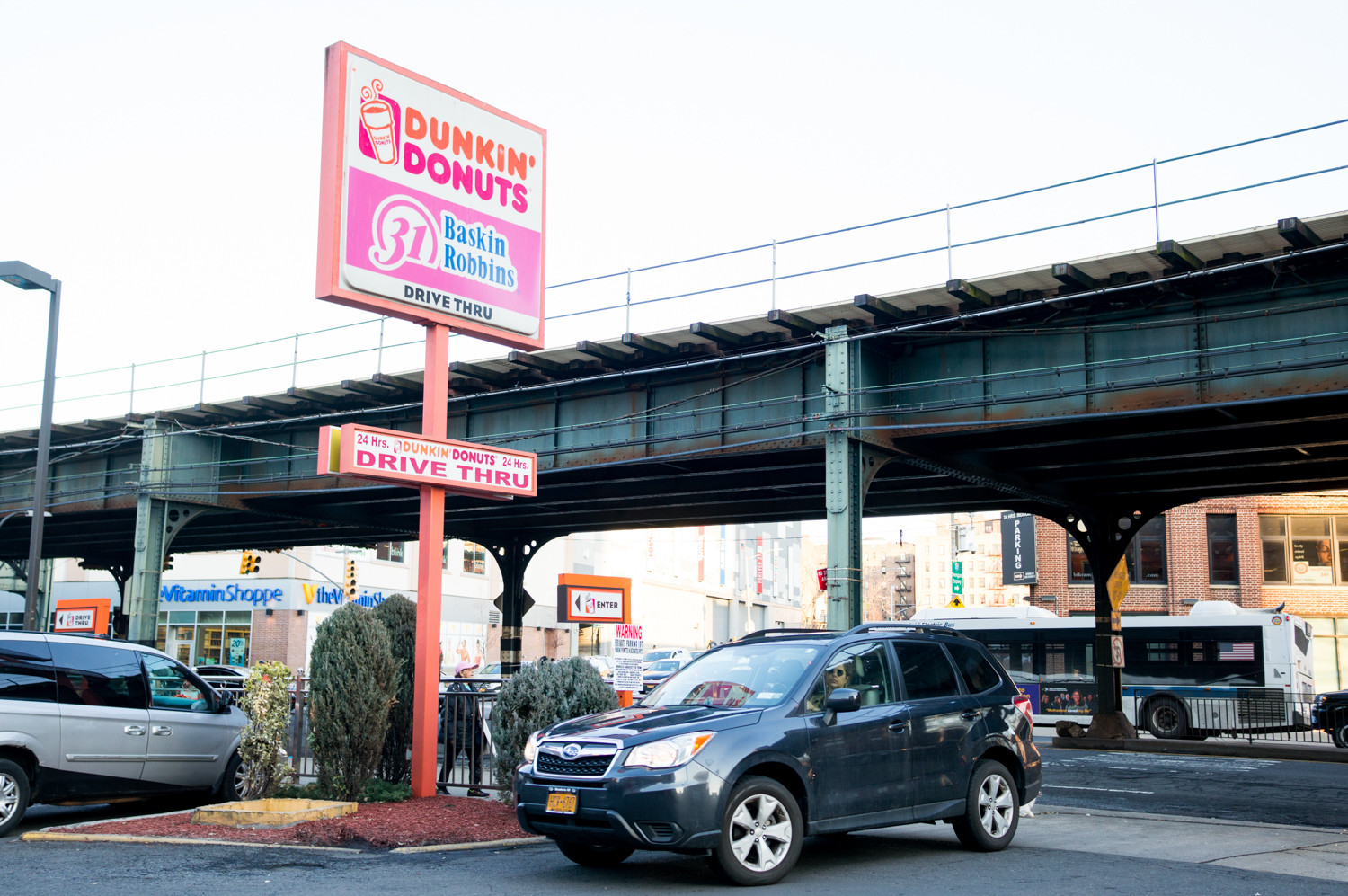 A driver looks for a spot at the Dunkin’ Donuts parking lot at West 230th Street and Broadway. Drivers are forbidden from using the lot unless they’ve come for the doughnuts and coffee — or for ice cream at the location’s Baskin-Robbins. Otherwise, they risk getting towed.
JULIUS CONSTANTINE MOTAL 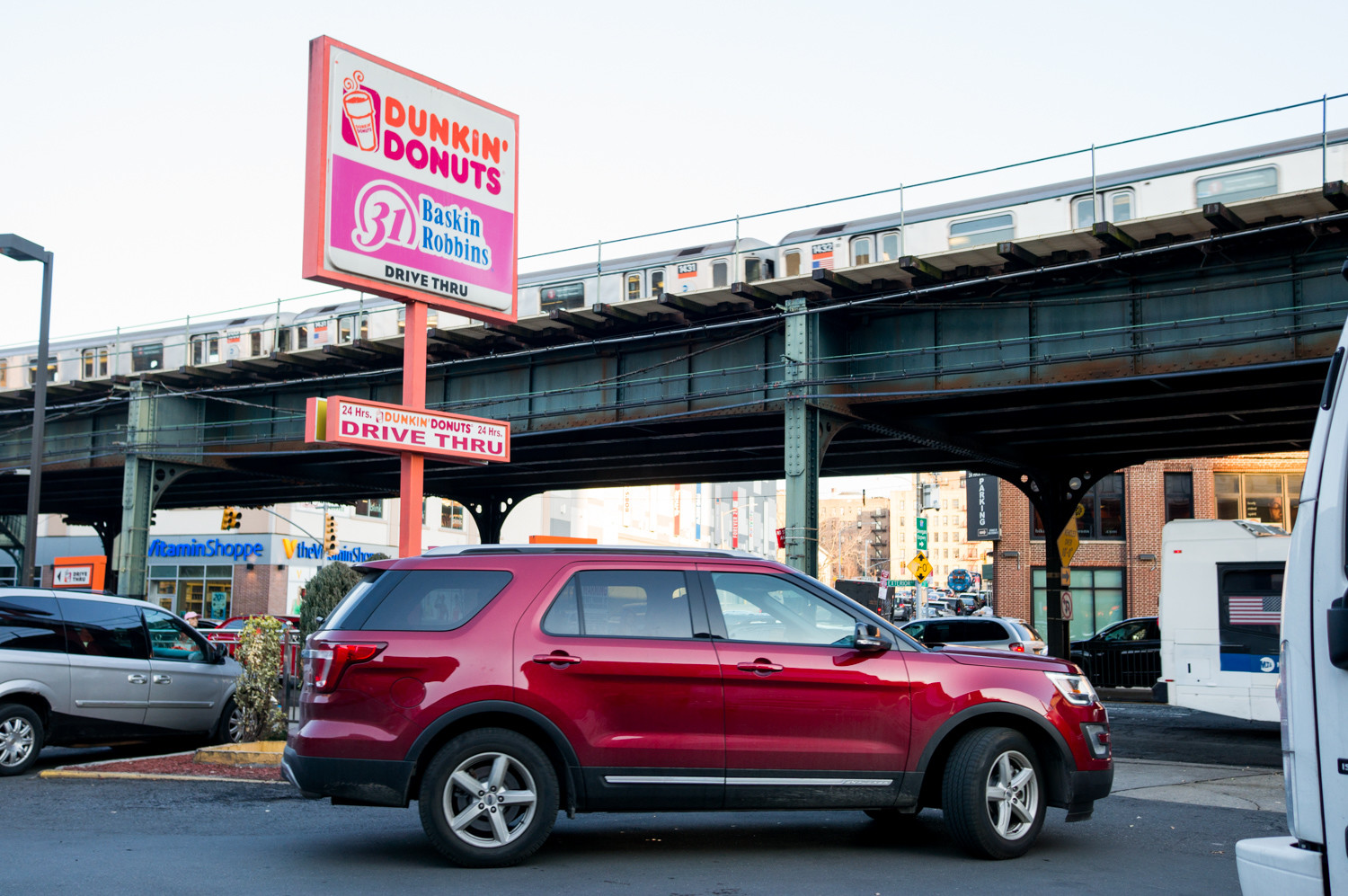 A driver leaves the Dunkin’ Donuts parking lot at West 230th Street and Broadway. Parking there and going to other businesses nearby — or to the post office, just steps away — risks getting towed by IPK Automotive Inc. Several people have accused the company’s drivers of using intimidating and what some say are illegal tactics like demanding cash payments.
JULIUS CONSTANTINE MOTAL
Previous Next
By ZAK KOSTRO

Carol Stricker was hankering for something sweet. It was late afternoon and she needed a boost before heading into Manhattan to catch an off-Broadway show.

But first, she had to drop off a package for a friend.

Stricker got lucky, snagging a spot in the Dunkin’ Donuts parking lot on West 230th Street and Broadway, and rushed to the post office just steps away. In fact, she was waiting in line at the post office when someone told Stricker her car was being towed.

“So I come flying out,” Stricker said, finding the tail end of her white Hyundai Azera in the air, attached to a truck.

She was able to catch the driver before he left, who was more than happy to set her ride loose — so long, Stricker said, she pay cash for a “drop fee.”

In a panic, she forked over the bills.

“I didn’t know what to do,” Stricker said. “Should I call the police? I was totally intimidated.”

Stricker’s friend was ensnared in a similar ploy last December after parking in the Skyview Shopping Center lot in North Riverdale. She had popped into Gruenebaum’s bakery for a bite before making a stop at another business across the street.

But Stricker and her friend aren’t alone. It seems tow truck season is in full swing.

Several cars were towed from the West 230th Dunkin’ lot a few weeks ago, according to Assemblyman Jeffrey Dinowitz. While the parking spots in the private lot are reserved exclusively for Dunkin’ customers, victims claimed tow truck drivers may have broken the law by demanding cash.

“It is important that an individual assert his or her rights,” Dinowitz said, in a release, urging car owners to call the police if they feel endangered.

While illegally parked cars clogging up the parking lot for extended periods should be towed, Dinowitz said, these incidents have often occurred when victims stopped in to Dunkin’ for a brew and a doughnut, then went to a different location off-property instead of back to their cars.

“The tow trucks are clearly watching for people who violate the rules, even if only for a moment,” Dinowitz said. “Those responsible for initiating this new wave of towing are not good neighbors to our community.”

If a sign is posted that a parking lot is reserved for customers only — as is the case at the Dunkin’ lot — and someone parks there and visits any other business, their car can be towed, said Christine Gianakis, press secretary for the city’s consumer affairs department, which licenses private towing companies. Even if they are off-property for just a few minutes.

The towed car must be taken directly to a licensed storage area, unless the car’s owner arrives before the driver has left, Gianakis said. In these cases, the driver can charge a “drop fee” to unhook the car of no more than $62.50, plus tax.

If the towed vehicle does make it off a private lot, the car’s owner can be charged $125 for the tow and first three days of storage, and up to $15 a day for storage thereafter.

By law, towing companies must accept at least two major credit cards for payment, Gianakis said. The maximum fine for refusing to take credit cards is $3,000 for the first violation, while other forms of unlicensed activity violating tow laws can incur fines of up to $10,000 for the third and subsequent violations.

A towing company that repeatedly violates the law risks losing its license.

The company responsible for towing cars from the Dunkin’ lot is IPK Automotive Inc., which lists its address as 1000 Brooke Ave., in Morrisania. Consumer affairs is looking into IPK, Gianakis said, but she said she would not comment on an open investigation.

A man who would only identify himself as “Chris” and said he was IPK’s owner, suspects allegations his drivers demanded cash and overcharged are false.

“This is what Dunkin’ Donuts wants. We’re just a hired company by them. We’re only doing what they tell us to do.”

All IPK trucks carry a credit card machine, Chris said, and drivers must always provide a receipt. He also denied anyone from IPK monitors the Dunkin’ lot, claiming his drivers are too busy servicing other businesses across the borough.

Predatory towing accusations are old news for cops in the 50th Precinct, who have nabbed their share of unscrupulous drivers.

“This is an issue that arises anywhere there’s tight parking,” said precinct commanding officer Terence O’Toole. In some cases, police have towed the towing company’s own trucks, holding them for as many as 30 days.

“I’ve met with the lawyers and the owners of several companies in attempts to try and have them regulate,” O’Toole added.

A company that operated under the name Riverdale Towing Associates was accused of employing similar tactics back in 2016 at the Skyview shopping center, said Brendan Fitzpatrick, an aide to Dinowitz. But there also have been problems at parking lots of other businesses in Kingsbridge, O’Toole said, including Smashburger and BJ’s Wholesale at West 237th Street, Staples on Broadway north of West 233rd Street, and the neighboring Silhouette restaurant.

Often, the issue isn’t the owner, but an employee.

“He sees a way to get an extra hundred, two hundred dollars, and he’ll pick on people,” O’Toole said.

IPK’s owner said although he had no knowledge of his employees intimidating customers, demanding cash or overcharging, he vowed he’d put an end to any foul play.

“The owners of the companies are businessmen,” O’Toole said, “but they usually end up with an unscrupulous driver here or there.”

A towing company has 30 minutes to notify the local precinct once it has towed a car to its facility, Gianakis said. This is important because it lets police know the car wasn’t stolen.

“Oftentimes, we’ll find that they don’t have a proper authorization and we’ll direct them to bring the car back to where they found it, and that’s the end of it,” O’Toole said.

It’s up to customers to blow the whistle, however.

“We don’t do enforcement unless we’re called,” O’Toole said. “If the tow truck driver is not playing by the rules, we’ll arrest him,” and promptly report the company to consumer affairs.

But anyone who has a problem with a towing company also can file a complaint themselves online or by calling 311. The consumer affairs department received nearly 1,300 complaints about the towing industry last year, Gianakis said, involving misrepresentation, billing disputes, overcharging and other issues.

Consumer affairs “takes its mandate to protect and assist consumers very seriously,” Gianakis said, “and each complaint goes through a careful process meant to hold companies who violate the law accountable, and make the complainant whole where possible.”

The department issued 167 violations and secured nearly $480,000 in fines and restitution last year, Gianakis said. It can charge businesses with violations that are heard at the city’s administrative trials and hearings office.

“I will fight ‘til I get my money back,” Stricker said.

In the meantime, she can still enjoy her favorite chocolate cream-filled doughnut — but Stricker may be getting it elsewhere.

“I don’t want to go back to that Dunkin’ Donuts.”