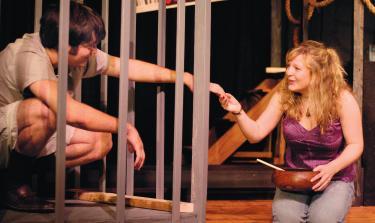 The auditorium at the Riverdale YM-YWHA is buzzing with activity.

On stage some teenagers are practicing lines, dance moves and songs, as big stage lights are being adjusted.

Meanwhile, two girls, much stronger than their petite frames let on, are hanging up two giant signs that scream: "BAT BOY child found in cave" and "His giant eyes see in the dark & his ears are better than radar."

It's Aug. 2 and the Riverdale Rising Stars are less than a week away from the premiere of their summer production BAT BOY: The Musical. Yet there are still a million things to do and lines to learn.

"It seems as if it isn't going to work out, but it always does," said Broadway veteran and director Laurie Walton. "The show always turns out great. The kids do a terrific job."

She should know. For the last seven years, Ms. Walton has been directing her budding actors in year-round sold-out shows at the Y. But summer poses greater challenges for her young stars.

"During the summer production they take care of everything from scenery to costumes and performance," she said. "Sometimes it's chaos but they always make it work in the end."

The teens have put on a number of classic shows, but this summer's selection has been, well, an interesting undertaking to say the least.

The show, which debuted off Broadway, tells the story of a halfboy, half-bat found living in a cave. (The character became famous when he appeared on the cover of the tabloid World News Report.) In the musical, the boy learns English and tries to assimilate into small-town life, but the residents are reluctant to trust the strangelooking creature especially when odd things begin to happen.

"It is a great musical. It is a dark comedy, but at the same time it is really ridiculous," said William Bishop, 16, the show's stage manager.

Zachary Kampton, 19, echoed William's remarks, adding, "The songs are just so much fun."

Many of the performers have been with Rising Stars through most of their teens, and their talent on stage is evident.

Mr. Kampton, who plays Reverend Hightower and wears a big wooden cross around his neck, is right on pitch as he sings his solos. Joining him for the gospel song "Joyful Noise," his castmates hold their own as well. The song makes the whole room vibrate.

"The musical variety is just one of the many great things about the show," said 19-year-old Emily Walton, an aspiring actress and Ms. Walton's daughter. "This is one of my absolute favorite shows. It offers the audience so many things. It's funny, but it still challenges you."