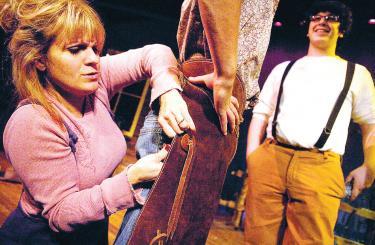 The Van Cortlandt Park Parade Ground froze over Sunday afternoon, but at the Riverdale YMYWHA, the stage sweltered under a southern sun.

During hour two of a five-hour rehearsal, the doughnut holes were long gone and potato chip crumbs dotted the theater aisles. A few minutes before he hopped on stage, Danny Berger ripped off a hunk of bagel.

"Once you get the hang of it, it's pretty easy," the sophomore at LaGuardia High School of Music and Arts and the Performing Arts said of his southern twang.

In a flash, the curly haired boy was gone, reciting his character's lines - in between bagel bites - amongst corn stalks and pigtailed girls.

It was the first scene of act two in Rodgers and Hammerstein's Oklahoma! and the Riverdale teens eagerly re-enacted an auction for Laurey's basket - and symbolically - her heart.

The Riverdale Rising Stars, directed by Laurie Walton, have put on many-a-show but this season's production has the cast giddy with excitement.

The Rising Stars plan to bring those four adjectives - and much more - to the stage with the classic musical. Rehearsing since September, the group is down to the wire this week as they prepare for the opening night, Saturday, Dec. 8.

"It's a classic piece of musical theatre," said choreographer Emily Walton, a former Rising Star. "Parts of it are dated but it's still timeless."

The young performers had to put aside grammar rules when memorizing this script, with songs like "Pore Jud Is Daid."

"This is a lot more old-fashioned than our other productions," said Alex Walton, who plays Curly, Laurey's love interest on (and off) stage.

Most of the lead roles explained that they've had experience with a southern accent in last year's production of Footloose.

"The accent is fun, it makes it much sillier," said Mason Taub, shortly after singing "All Er Nothin'" with Danny. Mason plays Ado Annie, a naļve flirtatious girl, but not all roles are so shallow.

Philip Feldman, a veteran of Y theatre productions, plays Jud Fry, a sullen, dark farm hand desperate for Laurey's attention. The junior at LaGuardia High School said the role is one of the hardest he's taken, but he's up for the challenge.

For the most part, the show is fun with a tad of serious. As Mason said, "It's something to bring the family to."

"We had a lot of fun doing it and I think that will show," Elia said.

WHERE TO SEE IT

BOOK BAG: Authors trace many paths on the way to 'America's Promise'