DeWitt Clinton High School has had its highs and lows, but life there is looking up 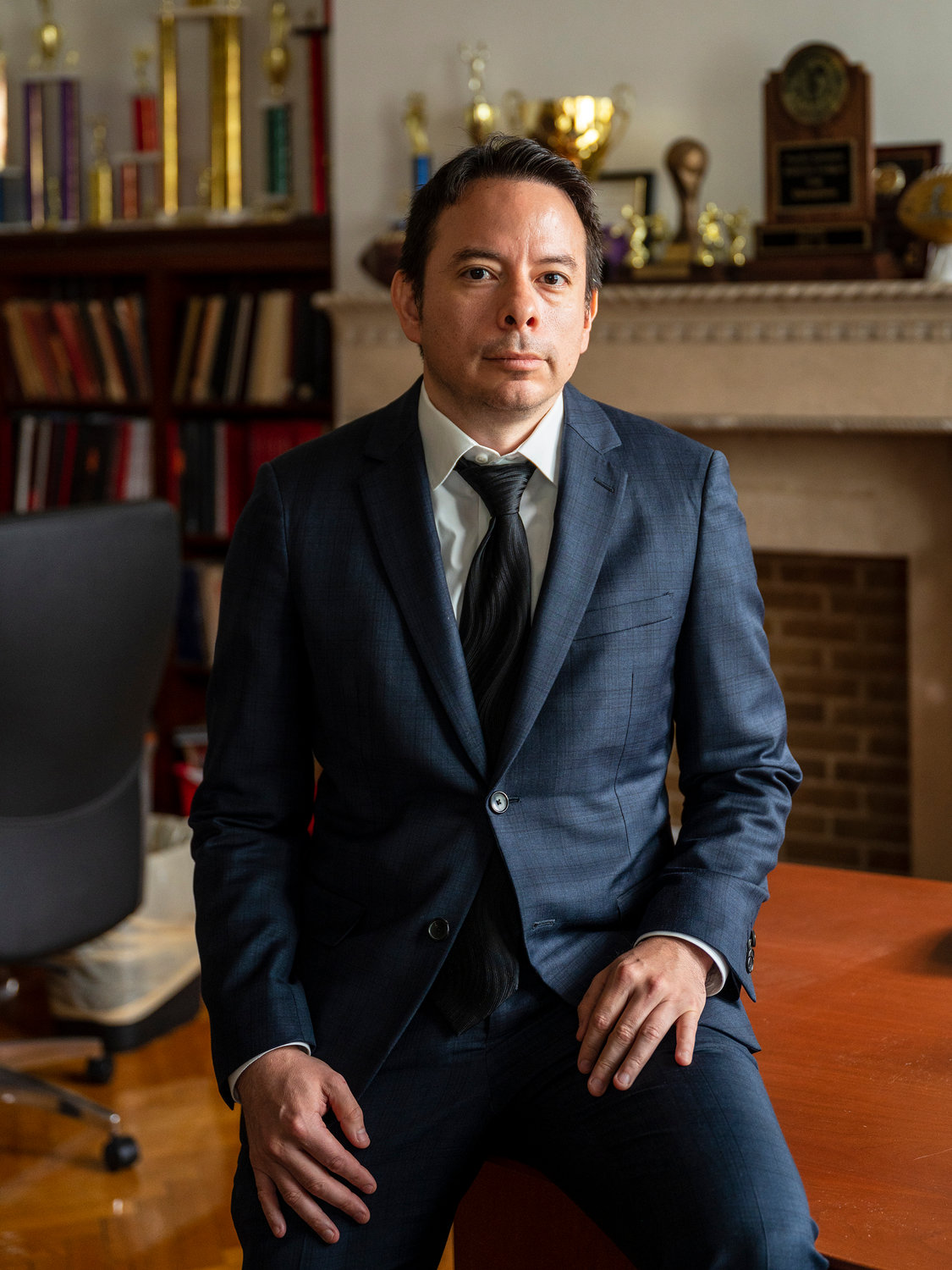 Pierre Orbe became the principal at DeWitt Clinton High School in 2017 — the third person to hold that position that year. Since his arrival, however, graduation rates have grown from less than half in 2015, to 9-in-10 last year.
Hiram Alejandro DurÃ¡n 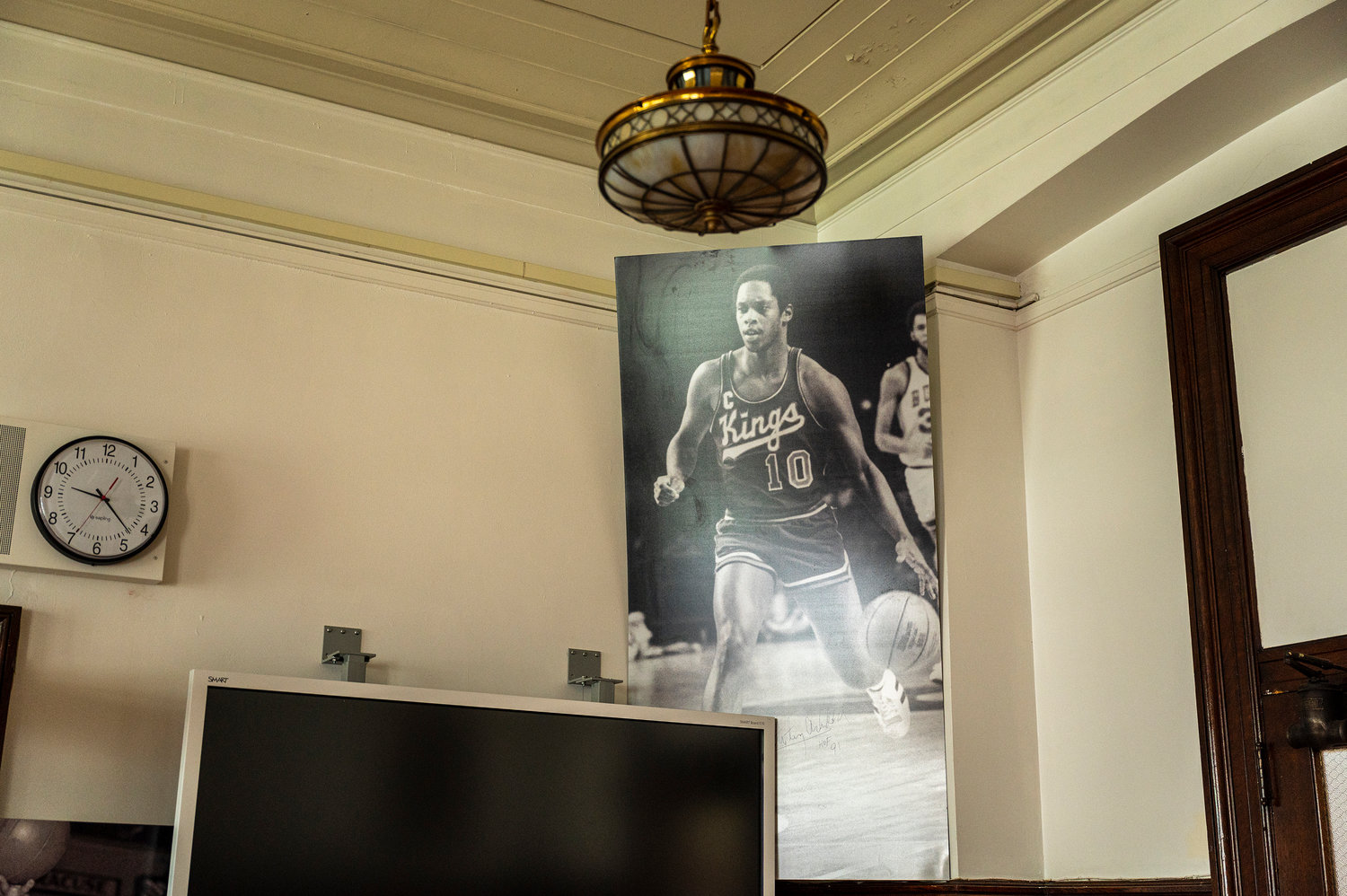 Nate (Tiny) Archibald, is one of two people to have his name painted on the floor of DeWitt Clinton High School’s gym. When Clinton principal Pierre Orbe the Hall of Fame NBA star to allow his name to be included in the gym, Archibald said only if his name was added next to the late Dolph Schayes, who played for the team that would eventually become the Philadelphia 76ers.
Hiram Alejandro Durán 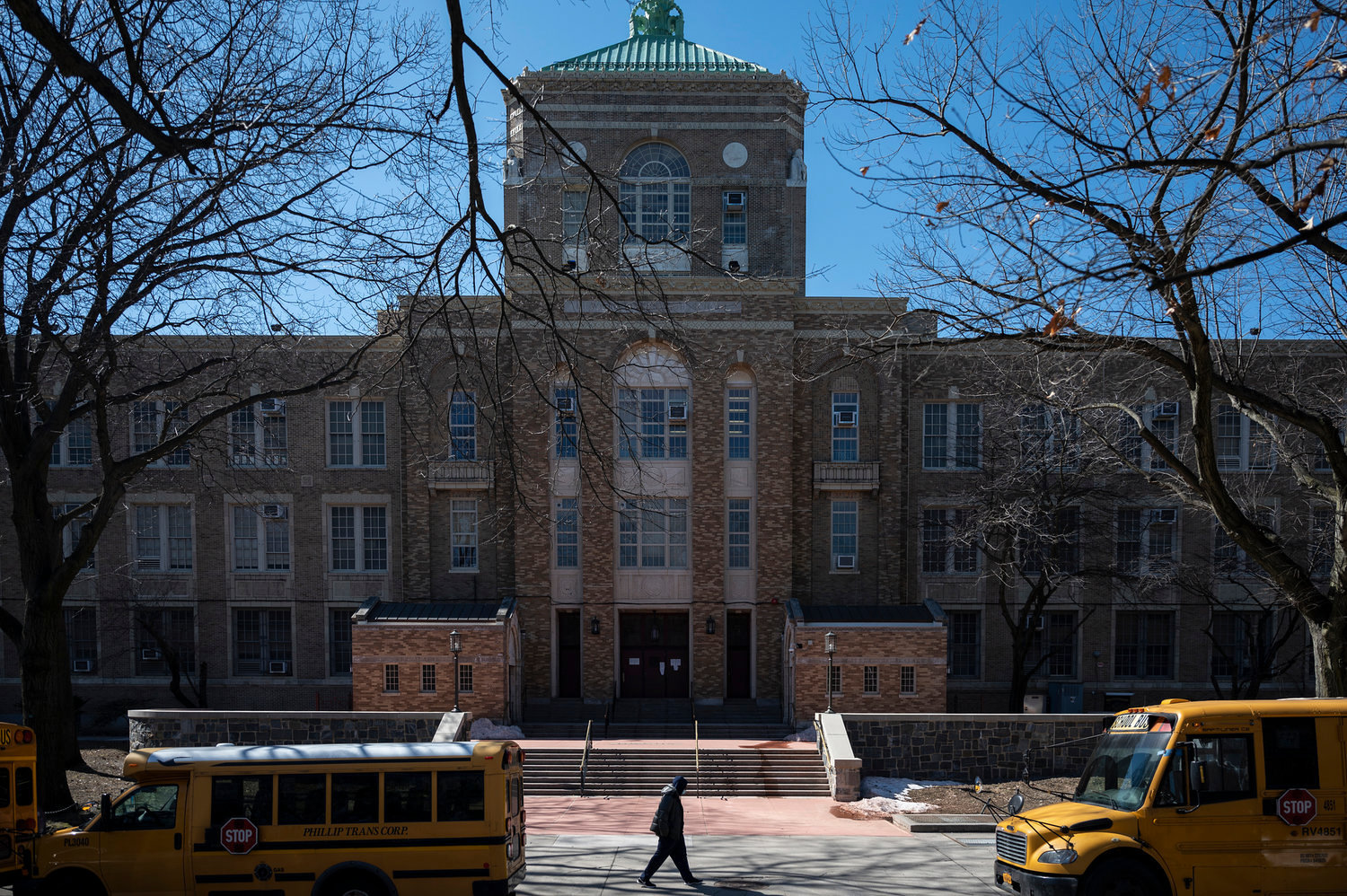 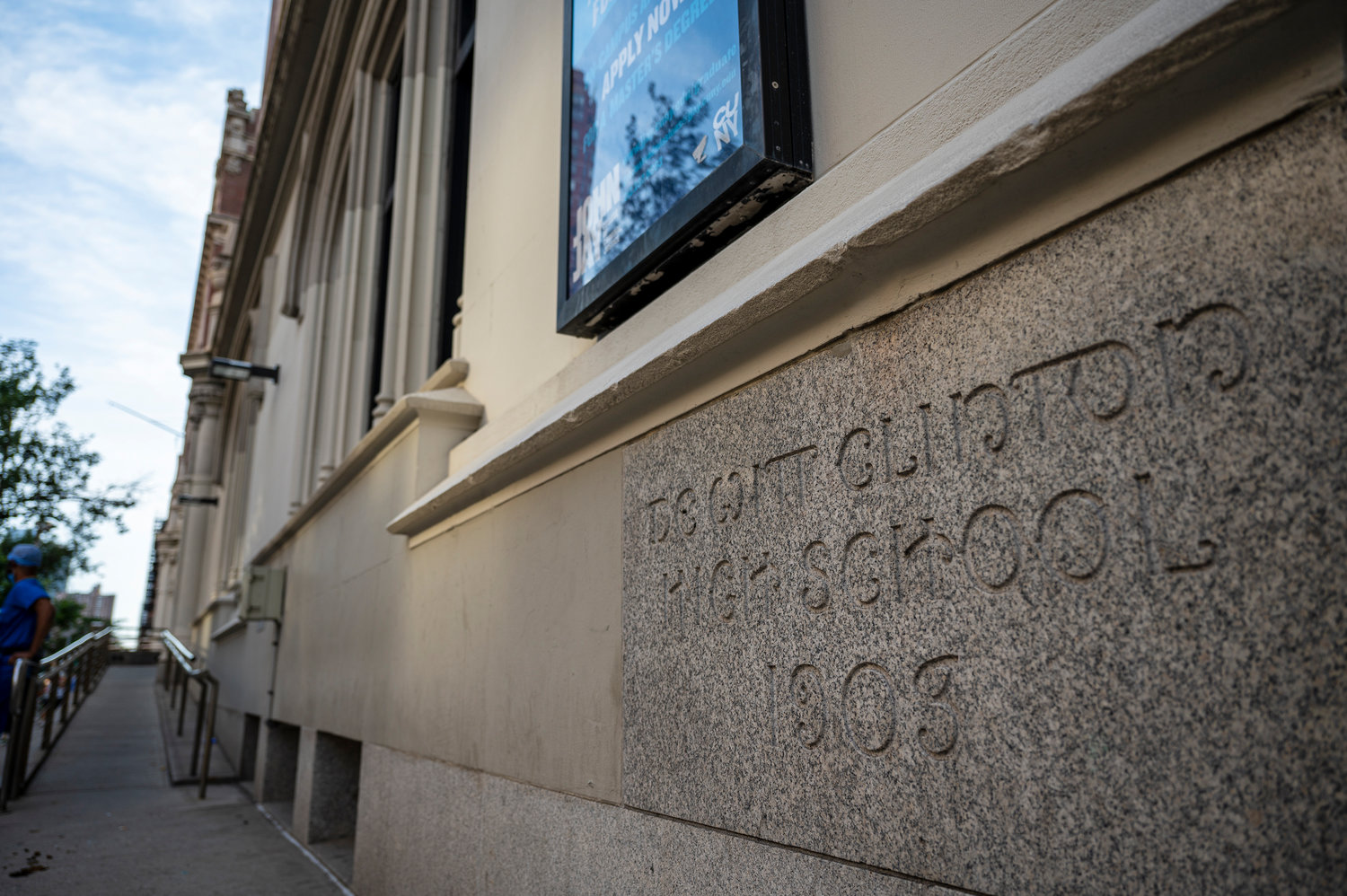 The words ‘DeWitt Clinton High School’ are visible on the John Jay College for Criminal Justice building in Manhattan. That is the former site of the high school before it moved to the Bronx in 1929.
Hiram Alejandro DurÃ¡n 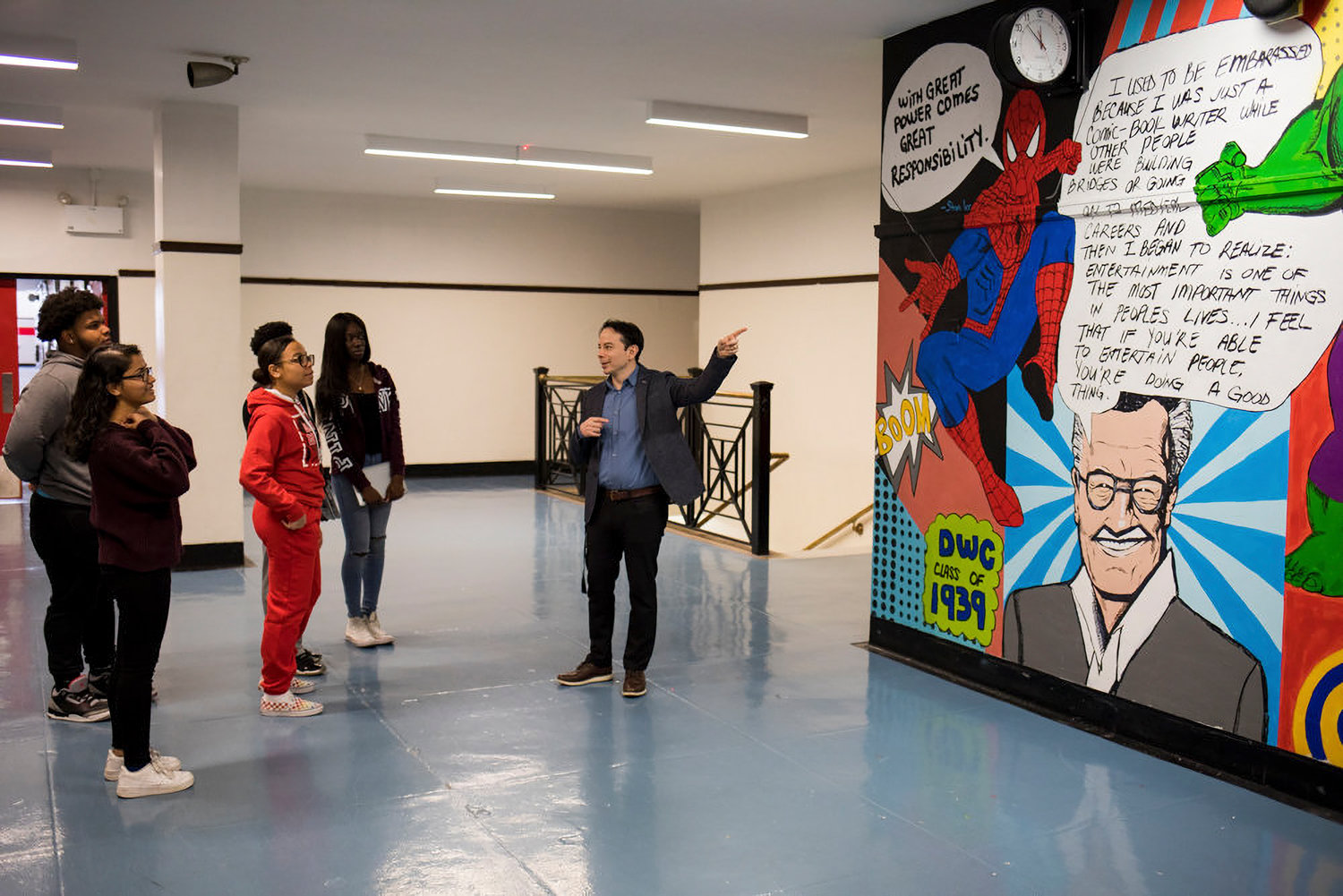 Pierre Orbe, the principal of DeWitt Clinton High School, talks with students about Stan Lee’s influence on him and late comic book legend’s legacy at the school last year. The city’s education department pumped the brakes on a plan to locate a fourth school within the Clinton campus.
JULIUS CONSTANTINE MOTAL / File 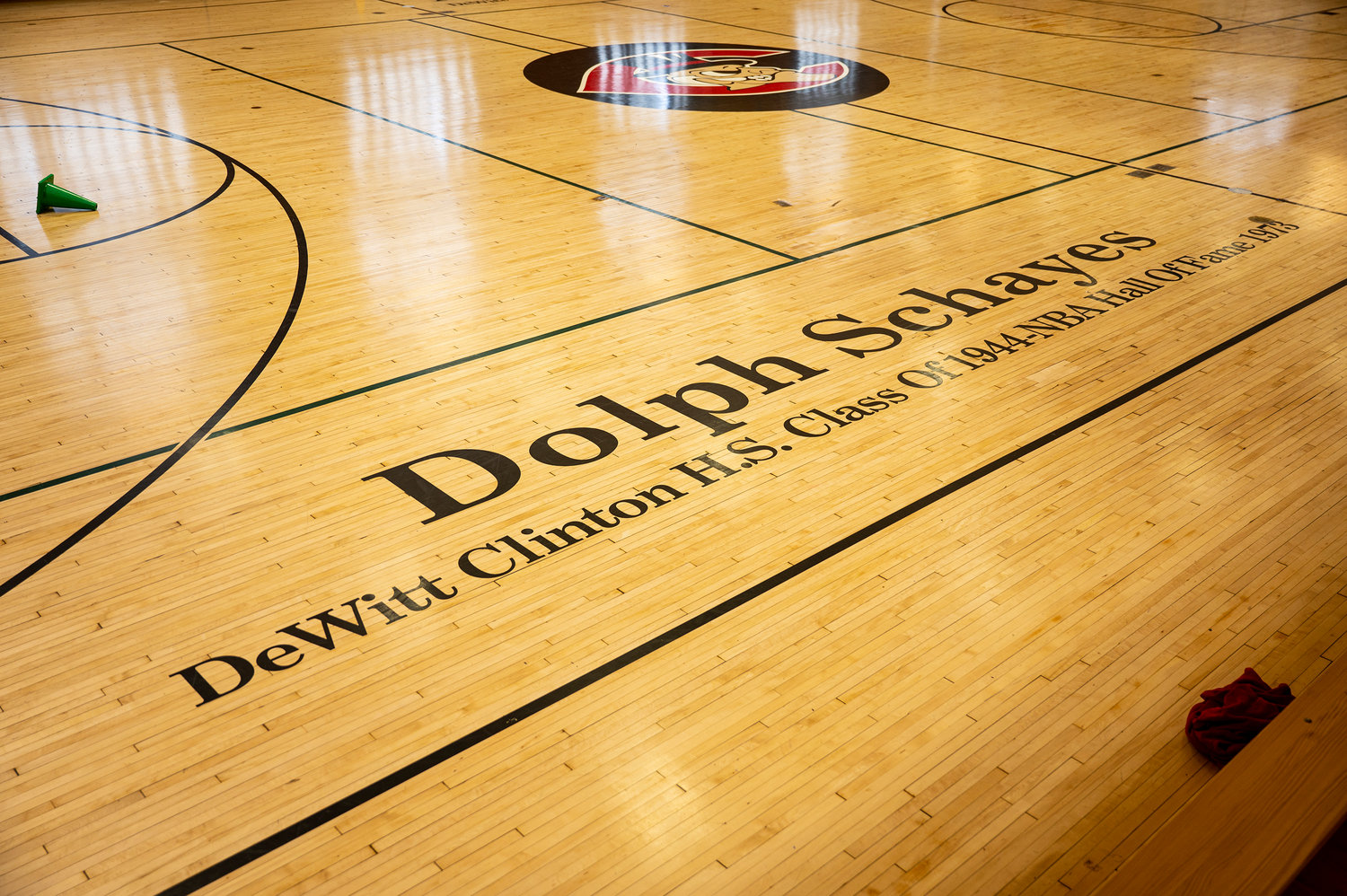 Nate (Tiny) Archibald, is one of two people to have his name painted on the floor of DeWitt Clinton High School’s gym. When Clinton principal Pierre Orbe the Hall of Fame NBA star to allow his name to be included in the gym, Archibald said only if his name was added next to the late Dolph Schayes, who played for the team that would eventually become the Philadelphia 76ers.
Hiram Alejandro Durán
Previous Next
Notable alumni

Poet, novelist, known for ‘Go Tell It on the Mountain’

Actor whose mother died just before his graduation

Maxwell Smart from ‘Get Smart,’ dropped out in the late 1930s

Playwright known for ‘The Odd Couple,’ ‘Lost in Yonkers’

Hall of Fame NBA player, most notably with the Boston Celtics

NBA player and coach who died in 2015

Creators of Batman who didn’t know each other in school

The stock market infamously crashed in 1929 — a year still remembered as the start of the Great Depression. Investors lost billions. The center of the universe seemed to be Wall Street for all the wrong reasons.

But the Financial District seemed a continent away up in the Bronx as it — already past 1 million in population — was welcoming something different from Manhattan. The Jerome Park community officially welcomed DeWitt Clinton High School, a boys-only institution named for New York’s seventh governor, which would eventually grow to 12,000 students.

It’s a rich history that began in Greenwich Village 125 years ago — in 1897, with 500 students. It moved a decade later to where the John Jay College of Criminal Justice would later open, to its home now on Mosholu Parkway, near the northern end of the Jerome Park Reservoir where its population exploded — especially after going co-ed in 1983.

“We literally had 6,000 students in the school,” said Gilbert Walton, a member of the DeWitt Clinton High School Alumni Association. “There was a good possibility that you did not know other people that were in your class.”

Mayor James Walker was on hand when Clinton moved to the Bronx, showing off a campus that cost $3.5 million — more than $57 million today — to build. While Walton’s days at the school in the late 1970s boasted a student population of 5,000, New York City claimed as many as 12,000 attended at one time in the 1930s.

It was so big, in fact, that Batman comic creators Bob Kane and Bill Finger didn’t meet for the first time until their mid-20s, despite being part of the same Clinton graduating class.

“I boggle my daughter’s mind when I tell her my graduating class had 900 students,” said Walton, who attended when Clinton was still only for boys. “It was bad,” he added, with a chuckle.

Walton studied finance at the University of Pittsburgh, ultimately getting a job on Wall Street.

When Sydney Valerio graduated in 1999, Clinton was named one of the country’s top schools by U.S. News & World Report. The alumni association president notes that all changed a little more than a decade later when Clinton was one of the city’s worst schools academically, and even faced closure in 2012 after earning an “F” grade from the city’s education department for student development.

Yet, the doors somehow stayed open, even if the one leading into the principal’s office was a revolving one. When Pierre Orbe took over leadership of Clinton in 2017, he was already the third principal that year alone. He faced down pressure from the education department, and pushed teachers to help grow the school, and get it back on its feet.

Orbe would ask the same question of the faculty, the alumni association — anyone who would listen: How did academic performance at the school drop so low so fast?

“I think one of the statements that was made to me was, ‘You’re the most important person right now here in the history of DeWitt Clinton,” Orbe said. “That was a pretty big weight.”

Slowly but surely, Orbe worked with teachers to change failing grades into passing ones. All while enrollment plummeted, to less than 1,000 today.

“They want their child to be in the best environment,” Orbe said of parents. “They start curtailing the kids away from that school, and then it became a snowball effect.”

It was Michael Bloomberg who set in motion what would be known as his “children first” program to create smaller schools within a larger institution. The mayor’s idea was to provide a small school experience in the hopes many students wouldn’t fall through the cracks.

Clinton’s third floor was broken up into two smaller schools, which made it hard to ensure there was enough access for everyone.

“The two other schools are on the third floor, and my daughter can’t even go up there to use the school library,” Valerio told The Press in 2019. “The Clinton kids aren’t allowed up there.”

When the classrooms filled to capacity during the day, a night school was created to handle the overflow. While it was beneficial for students who preferred to work during the day, many still didn’t enjoy it.

Before the start of the coronavirus pandemic in 2020, Orbe relied on the alumni organization to save the school. He also took steps to solidify Regents scores, graduation levels, and academic accreditation.

”Their desire to want to see students graduate from the same place they did.”

And Clinton is seeing results. Less than half its seniors graduated in 2015. But those numbers have steadily grown since then, with 9-in-10 now receiving their diploma.

That has shifted the focus of many alumni, like David Goldberg, to the next step.

“We want everyone to go to college,” said the 1966 graduate.

Goldberg’s run at Clinton coincided with that of Nate Archibald, who would later win an NBA championship with the Boston Celtics.

“I think it’s pretty unique that our alumni have always given us pretty large amounts of scholarships to graduating seniors,” Orbe said. “It’s not exactly something that I’ve heard of, really, at any other school.”

That’s become especially important these days when colleges, for many, is almost unaffordable. Clinton’s long history can make a difference.

“The association is extremely generous because its endowment has been funded for a century at this point,” Valerio said.

One alum who died over the last couple years left more than $10,000 to the school from his annuity fund.

The association raised even more last month at its annual alumni dinner at Marina Del Rey that celebrated a significant milestone for the school: 125 years. The dinner paid tribute to five honorees, and drew more than 160 people, paying anywhere between $50 and $1,000.

Among the honorees was former Assemblyman Michael Blake, who also spent time in the Obama White House.

“What I think is super unique is that when you experience your education at Clinton,” Valerio said, “you’re getting sports. You’re getting extracurriculars. And you’re getting a quality education that prepares you for college.”

Many don’t even realize the worth and value of their education until they get older, she added. And that is what makes many generous with their time and resources later in life to help future Clinton graduates.

Some even take that role quite literally. Many of Valerio’s teachers from 1999 are still there. Coach Cornel Johnson, she recalls, graduated from Clinton and went to college out west. He returned to Clinton as a teacher, and while still retired, he is coaching the girl’s track team.

Clinton’s 125 years of existence still has some celebration left. The next major event is an Aug. 2 golf outing at Pelham Bay Golf Course.

“We took a break, and now we’re kind of getting back into the swing of things,” Walton said.

Money collected from that goes directly into the Clinton scholarship fund. A foursome costs $900, while a single-golfer can participate for $250.

Walton hopes to bring out as many as 80 golfers to the event, which could raise upward of $20,000 for the scholarship fund. To register, visit tinyurl.com/DWCGolfClassic. To learn more about the alumni group, visit DeWittClintonAlumni.com.