A deep dive into the world of garlic mustard plants 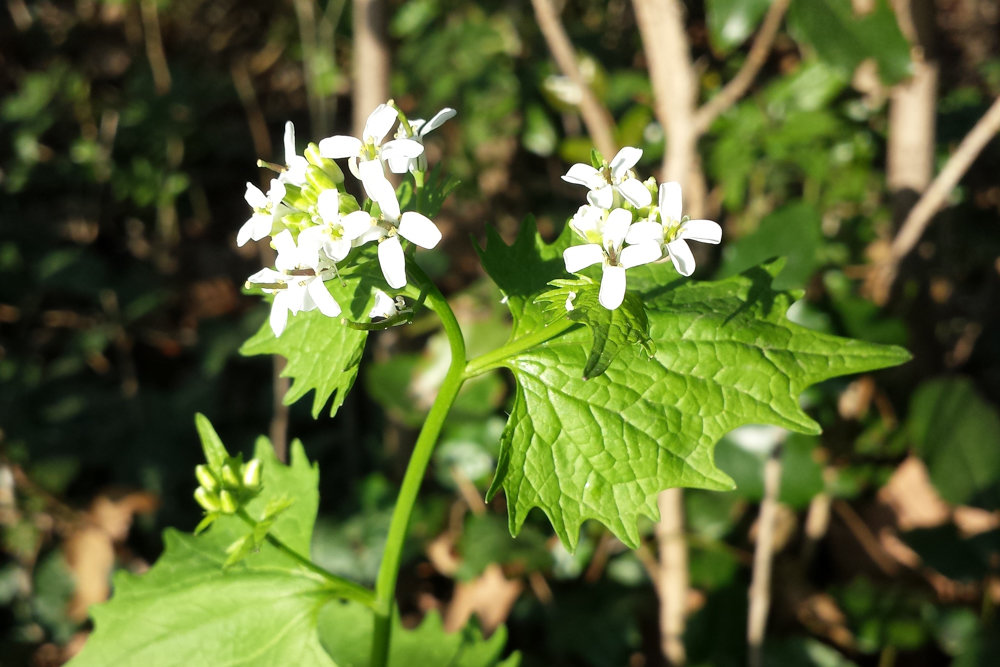 The garlic mustard, known as Alliaria petiolata, is a non-native biennial plant native to northeastern Europe.
Courtesy of Stefan Iefnaer
By SURA JESELSOHN

To better understand the reach of the EcoFlora Project in New York City, here are some illuminating statistics.

May’s Challenge was the Mustard family (Brassicaceae) of which 58 species had been documented previously. The challenge brought out 143 citizen-scientists who made 1,780 observations of 46 of those species.

The surprise observations included a species new to New York State — Thlaspi alliaceum (garlic pennycress) — and a new species for the Bronx, Turritis glabra (tower mustard). The other exciting find was Descurainia sophia (flixweed), not seen in New York City since 1901.

The only wild widespread mustard family member with which I am acquainted is the non-native biennial garlic mustard, Alliaria petiolata. It is native to northeastern Europe — from England east to the Czech Republic, from Sweden south to Italy. First noted in 1868 on Long Island, it had been used in Europe as a culinary seasoning, medicine, and for erosion control.

It has become widespread due to self-fertilization and high seed production — up to 15,000 seeds per plant in the second year of growth. Deer may also be important to its spread since they preferentially browse native plants. They thereby remove competitors while at the same time spreading seed on its fur, which then drops onto  soil exposed by hoof trampling.

The Alliaria make a beautiful show of white in the spring but they invade a wide variety of forest types and destroy the understory of native flowers such as wild ginger (Asarum), Dutchman’s breeches (Dicentra cucullaria) and trilliums (Trillium grandiflorum), which in turn affects insects that rely on these wildflowers as food for their caterpillars.

There are two ways that plants can remake their community. The first is by out-competing other plants for resources, or overshadowing them and denying them the necessary sunlight for photosynthesis to take place. The second, which is practiced by Alliaria petiolata, is allelopathy. A word coined in the 1930s from the Greek allelon meaning “one another” and pathos meaning “suffering,” it is a botanical term referring to harm caused to a plant by another plant through chemical substances that can inhibit germination or growth, or interfere with a symbiotic relationship that otherwise provides nutrients to the plant.

These chemicals can be released in many ways, including “exudation from the root, volatilization, and decomposition of leaves and other plant parts.” In addition, the ecological factors of temperature, moisture and available nutrients can also interface with allelopathic chemicals to amplify their effects.

The concept that some plants are inimical to others was already discussed by the ancients. Theophrastus (c. 300 B.C.), a Greek philosopher and successor to Aristotle, had noticed the effect of a pigweed (Amaranthus) on alfalfa (Medicago sativa). In China, the “Shennong Bencaojing” (“Classics of Herbal Medicine”) listed many plants that negatively affected other plants. In a recent study from China, 75 percent of highly invasive weeds showed allelopathy.

Some of our more common allelopathic plants include the ubiquitous urban tree-of-heaven (Ailanthus altissima) where the allelotoxin is in the root bark, eucalyptus, forsythia, rhododendron and black walnut (Juglans nigra, family Juglandaceae) the allelochemical name of which is “juglone.”

The leaves, roots, husk and bark of the Juglandaceae create black stains, and all contain juglone. Juglone is closely related to lawsone, the staining compound in henna (Lawsonia inermis) although the plants are not related.

It must be noted that a plant will have an allelopathic effect on only a few specific plants, but not universally against all other plants. With that caveat in mind, juglone is most toxic to the nightshade plants — eggplant, tomatoes, potatoes, peppers — as well as to azaleas, pine and birch. On the other hand, many plants tolerate juglone quite well, including lima beans (Phaseolus lunatus), corn (Zea mays), carrots (Daucus carota subsp. Sativus) and the catalpa tree (genus Catalpa).

While killing interactions would seem to be only a negative phenomenon, in fact they could have beneficial effects when used in agriculture. For example, herbicides such as Callisto (mesotrione) produced by Syngenta is a synthetic derivative of an allelopathic chemical produced by the Australian shrub Callistemon citrinus (Myrtaceae family) which is very useful for the control of crabgrass in lawns as well as of broad-leaved weeds in cornfields by preventing photosynthesis.

There are other ways that allelopathy can be harnessed for agriculture. Genes for specific allelopathy could be bred into commercial crops to protect them from their most common weeds. Another method would be to use an allelopathic crop with the proper characteristics in a field contaminated by certain weeds, which would lead to the elimination of those weeds. Another version of that technique would use intercropping (mixing of two different types of plants usually in the space between the rows) of allelopathic plants with the main crop.

Returning to the garlic mustard, however, what was the white foam that I saw along the stem of the plant? Stay tuned!