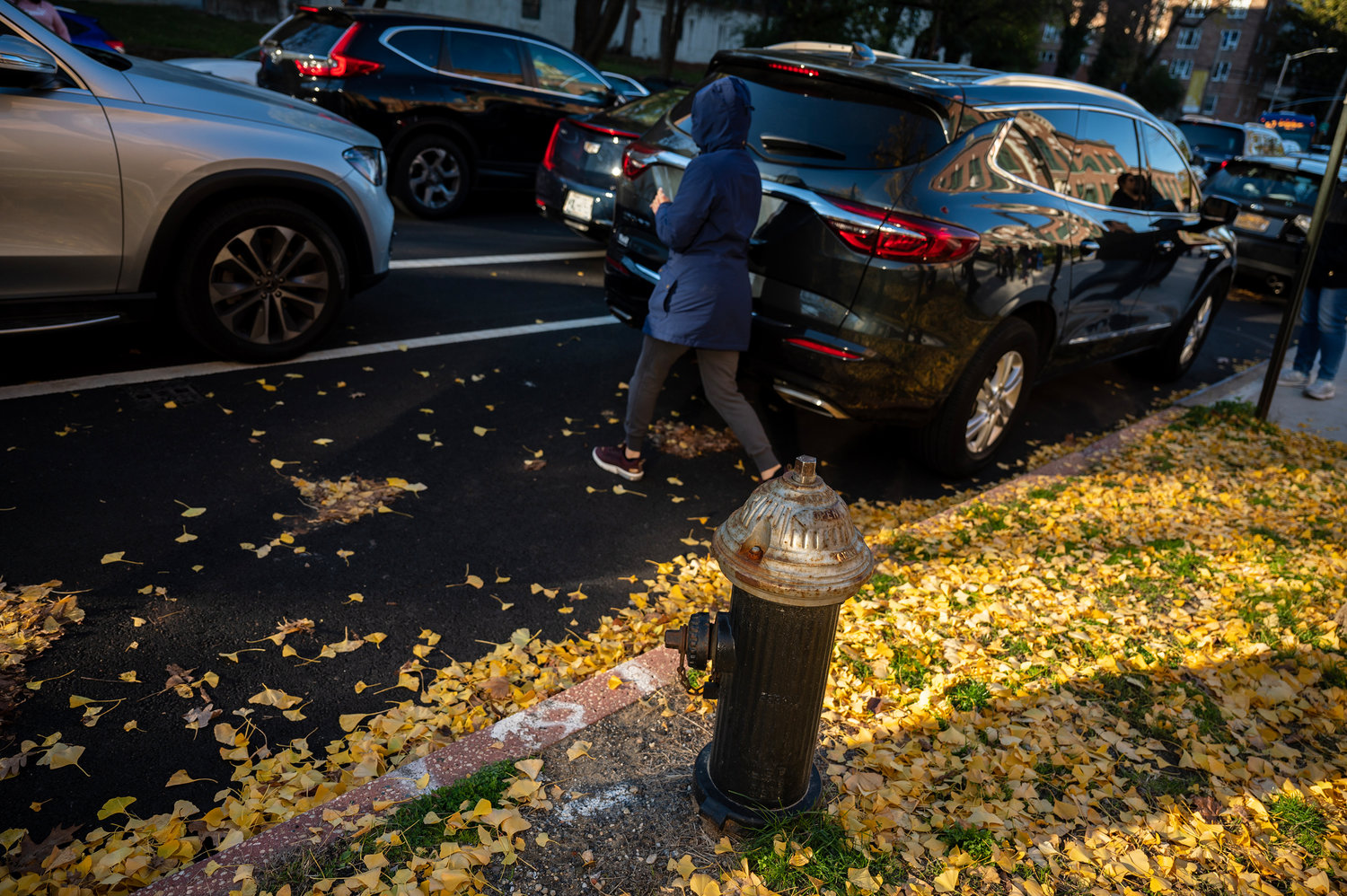 Blocked hydrants are a familiar sight in Skyview Apartments by overnight parkers and parent picking up children during school dismissal in front of P.S. 81 Robert J. Christen.
Hiram Alejandro Durán

If you’re a little close to the hydrant — 13 feet — that’s one thing. But if you’re literally parked in front of it, those cars should be ticketed, if not towed. Period.”
JEFFREY DINOWITZ, Assemblyman
By Stacy Driks

Vivian Isom considers herself an early bird as she leaves for work in her Skyview Apartments on Arlington Avenue at approximately 5:30 in the morning. As she heads out, she notices cars frequently parking beside a fire hydrant.

“These cars are parked here overnight, they made it their personal parking spots,” Isom said. “Fires don’t come only in the daytime.”

But it is uncertain if there are cars parked there during the daytime.

The problem of parking next to hydrants is not particular to one neighborhood. Engine 52 — Fieldston’s local fire department — and likely every other firehouse in the city encountered this issue.

“It’s possible if there is no other way to get the hose in place that a window may be broken,” said Frank Dwyer, the fire department’s deputy commissioner of public information and external affairs. “A blocked hydrant jeopardizes lives, and there is no time to move a car.”

When firefighters encounter a blocked hydrant, they must quickly get a hose line connected to the hydrant — the only reliable water resource at arm’s reach. If the hydrant is unreachable — the challenge begins. In the worst-case scenario, firefighters can be forced to smash a car’s window to reach the hydrant.

“If you’re a little bit close to the hydrant — 13 feet — that’s one thing,” Assemblyman Jeffrey Dinowitz said. “But if you’re literally parked in front of it, those cars should be ticketed, if not towed. Period.”

Depending on how close a parked car is to the hydrant, it is possible tickets can be distributed within 15 feet of a hydrant.

The only exception, the city’s transportation department says, is between sunrise and sunset when a car may stand alongside a hydrant and the driver is prepared to move for an emergency vehicle.

The fine for parking next to a fire hydrant is $115 throughout the five boroughs.

Throughout the city, there have been more than 127,000 three-one-one complaints for the past year.

Within the northwest Bronx, there are over 12,000. Isom reported more than two dozen 311 complaints herself this year, and each case has been closed.

She only noticed the reoccurring problem after the January Fordham Heights fire that killed 17 people, including eight children. Roughly 200 firefighters responded to the scene.

“I just keep thinking about those people who were killed in that building,” Isom said. “I just don’t want to see that happen because someone is too lazy to find parking.”

While Isom has multiple photos showcasing her proof, she feels she is fighting a losing battle.

Between going to Dinowitz, the community board, and the 50th Precinct, she sees that it only worsens. Her next step is contacting the Bronx borough president Vanessa Gibson.

Dinowitz said it is hard for police to enforce at Skyview during nighttime because most residents won’t wait in the middle of the night for an illegally parked vehicle to arrive. If they do, the police won’t come so fast, he said.

“And if they have a placard — I have not seen a single placard in existence that I’m aware of that entitles you to park in front of a hydrant,” he said.

Isom explained to The Riverdale Press she believes there is not heavy enforcement on her street because one of the officers from the 45th Precinct — Throggs Neck — is using that spot for themselves.

Parking can be challenging in Skyview, Dinowitz says. Residents of Skyview do have a lot of parking. Unless a person just moved in and was not yet assigned a spot, most people living there have parking spaces.

The apartment building has between 1,300 and 1,400 units, creating limited street spaces.

“I saw a fire truck on my way to work — 5:30 in the morning and I said you know what? God forbid there (wasn’t) a fire right now because all of them were blocked,” Isom said.