A race to watch this summer 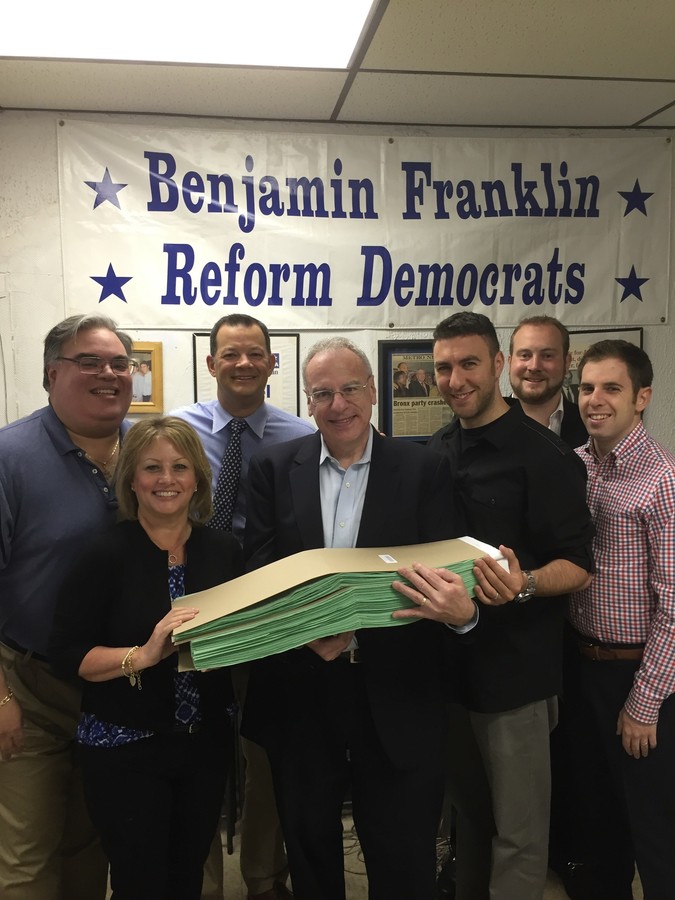 Petitions to run for office in the Sept. 13 primaries were due on July 15.
Photo courtesy of Assemblyman Dinowitz' office
By Anthony Capote

In the course of a long election, which has already featured two primary dates for New Yorkers, a third is coming quickly down the pike.

Petitions for the Sept. 13 local and state primaries were filed on July 15, with a wide range of public offices up for re-election.

The race to watch is still the rematch of the 2014 state senatorial race between incumbent Sen. Gustavo Rivera and Councilman Fernando Cabrera. The two faced off last election cycle, during which Mr. Cabrera sought the support of state Sen. Jeff Klein and the Independent Democratic Conference, but failed when Mr. Klein indicated some of the councilman's views were too conservative.

In 2014, Mr. Cabrera’s bid was derailed after the emergence of a YouTube video of him praising Uganda’s anti-gay legislation. He lost by more than 1,700 votes, but in an interview with The Press, the councilman insisted he had a chance of winning.

“The campaign is doing amazing, the level of support that we have has been [getting is] amazing,” Mr. Cabrera said. “I’m very content where the campaign is right now.”

He defended his record on LGBTQ rights, saying he wants to serve his constituents regardless of their sexual orientation.

“If you look at legislations that have come before the Council that has the potential to help the LGBT community, I have been there,” Mr. Cabrera said. He went on to compare Mr. Rivera to Donald Trump and even called him “a do-nothing senator.”

Mr. Rivera responded to those claims by listing off his accomplishments in six years as a senator.

“I can’t tell you that I know why Mr. Cabrera feels it necessary to run against me again, after I beat him two years ago,” he said. “If we’re going to talk about accomplishments, let’s take a pick, whether we are talking about housing, people that my office has helped stay in their homes, I was able to secure $250,000 for three Mitchell-Lamas in my district.”

The two contenders’ districts largely overlap, with both including parts of Kingsbridge. Campaign funding is likely to play a large role in the coming race, both men agreed.

“All campaigns require funding, so that’s one piece we will definitely focus on,” Mr. Cabrera said.

Other northwest Bronx officials running for re-election include Assemblyman Jeffrey Dinowitz, who is running unopposed in the Sept. 15 primary election, after filing almost 4,400 petitions in June.

Ms. Alcantara, a Manhattan College graduate and, like the outgoing Mr. Espaillat, a Dominican immigrant, won a Women of Distinction award from the outgoing senator’s office in 2015, and worked as campaign manger for Councilman Ydanis Rodriguez in 2001 and 2008.

Mr. Lasher is a former chief of staff for New York Attorney General Eric Schneiderman with a long history of activist work.  Mr. Jackson is running again after losing in the 2014 primary to Mr. Espaillat, along Mr. Tejada, who also ran in 2014.