A surprising inspiration for a remarkable garden just north 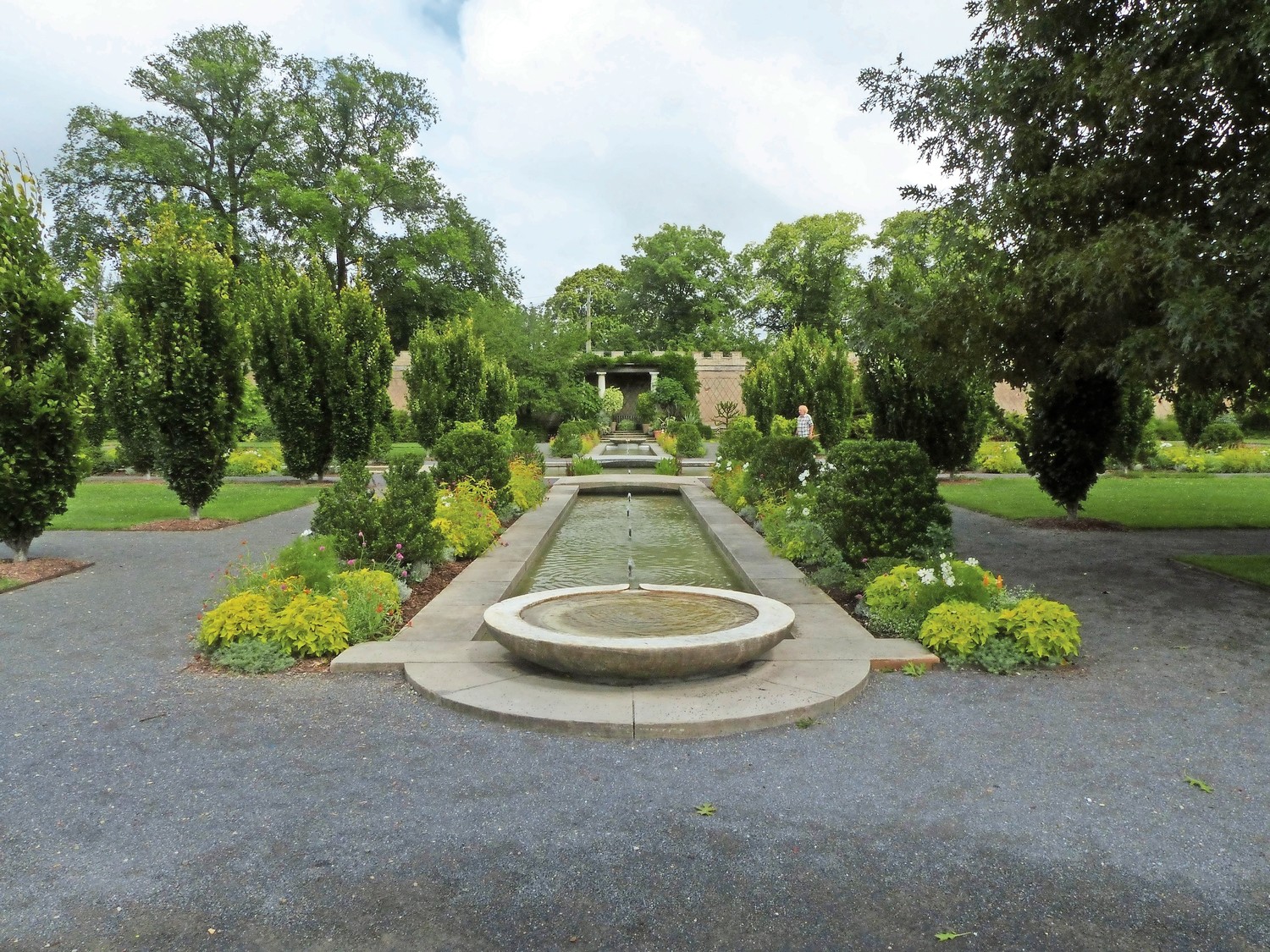 It might seem there's a bit of an Islamic touch to Untermyer Garden, especially when walking through the central channel toward the amphitheater, but the Yonkers attraction is actually influences by Indo-Persian designs.
Courtesy of Sura Jeselsohn
By SURA JESELSOHN

Imagine stepping through a doorway set into high crenellated brick walls into a magical garden.

I can only liken it to an “Ali Baba and the Forty Thieves” moment, when the mundane world melts away and shining jewels scattered all around.

Weeping beeches inside the entrance create deep shade with bright sunlit areas straight ahead. I exclaimed, “It’s an Islamic garden,” having read The Art of the Islamic Garden by Emma Clark. But I was corrected by Stephen Byrns, president of the Untermyer Conservatory. The Yonkers garden is, in fact, Indo-Persian or Zoroastrian. These civilizations long predated Islam, and their garden style was adopted widely by Islamic builders.

The early Zoroastrian word for these gardens is paridaeza, meaning “surrounded by a wall.” That word morphed in interesting ways:  In Akkadian (pardesu), it means “cool weather or shaded place.” In Hebrew (pardes), “an orchard.” And in English, it has become paradise.

These gardens became known as chahar bagh or charbagh, with chahar meaning  “four” in Farsi, and char meaning the same in Urdu, while bagh is “garden” in both languages. These gardens are always divided into four quadrants by water channels, usually with a long axis crossing a shorter one, and a pool in the center where the two channels cross.

These gardens are seen as symbolizing the biblical Garden of Eden, plus the four Zoroastrian elements of sky, earth, water and fire. At Untermyer, there are several short canals crossing the long central one. A reflecting pool filled is at the northern end of the long channel with tropical aquatic plants and goldfish.

In addition to the Middle Eastern and Asian elements, the garden is filled with structures using ancient Greek motifs, Mycenaean mixed with classical ones. Mycenae was an ancient hilltop city about 56 miles southwest of Athens. Mycenaean history (between 4500 and 1200 B.C.) predates the more familiar classical Greek culture.

The entry gate set into the south-facing wall is meant to echo the lion gate at Mycenae, although the sculpted Artemis figure at the top — a Persian deity as well — is clearly done in classical Greek style. The long central canal which ends in the reflecting pool is then bookended by a classical Greek amphitheater while its mosaic floor — depicting spirals and plants — is based on a wall fresco found in Tiryns, another Mycenaean city.

A classical Greek temple lies at the western end of an east-west channel with the head of Medusa centered in the mosaic floor surrounded by floral designs. Medusa was an evil figure in Greek mythology. Her hair was a mass of snakes, and her gaze turned people into stone.

It was chosen, however, because “she was the daughter of two marine gods, and therefore referenced the water features of the Walled Garden and the Hudson River” flowing to the west .

Finally, there is a stoa, a covered walkway for public use, of classical Greek design on the eastern end of the same channel that ends at the Greek temple.

Plantings complete a garden, and there are plenty of permanent ones like statuesque trees, bushes, vines and shrubs along the walls and waterways. Large containers with architectural plants such as alocasia are scattered throughout. In the beds lining all the walls and along all the water channels are either shade or sun-loving perennials.

But the annuals, which flower throughout the growing season and intensify the garden experience, are chosen afresh every year. One year, Untermyer planted a dazzling variety of marigolds to honor the Indian heritage. This year’s palette, also intended to produce an Indian feel, chose whites, yellows, pinks and oranges.

The orange and yellows were provided by gomphrena, white by a dwarf cosmos, and a white-flecked yellow coleus, and pink by a verbena. The understudy plants included euphorbias and butter-yellow pachystachys, as per head gardener Timothy Tilghman.

Two other highlights should not be missed.

The Temple of Love, a small, round Greek-style structure with the original ironwork dome, sits atop the highest point on the property. This structure, known as a “folly” — generally meaning a structure built for a visual effect — was designed afresh for the present garden and is not a restoration of the original.

Most beautiful is the water springing up from the base of the temple, cascading down a rocky channel bordered with lovely plantings.

The second highlight is the vista, a long staircase of stone slabs descending from the amphitheater to a circular overlook containing ancient Roman columns, with an exquisite view of the Hudson River. These stairs were based on a similar feature at the Villa D’Este on Italy’s Lake Como. The work began in 1550 and continued over decades.

The stones of the Vista are outlined by grass, and the borders are planted with Hakonechloa macra aureola, and then by Cryptomeria japonica radicans.

Among the features noted from Samuel Untermyer’s time that have not been restored, there are three that stand out. First among these is the rock garden that ran from the base of the Temple of Love up the hillside to the Persian garden. The second is the color gardens of which there used to be six, each planted in flowers of a single color family across the spectrum.

And finally are the partially restored rose and dahlia gardens just north of the ancient columns.

You can be part of this great adventure! Untermyer Gardens is accepting volunteer greeters, gardeners and docents.