A year late, $400 short: Voice from the ‘forgotten’ class

Is graduation ceremony still worth it on Zoom — and a year after the fact? 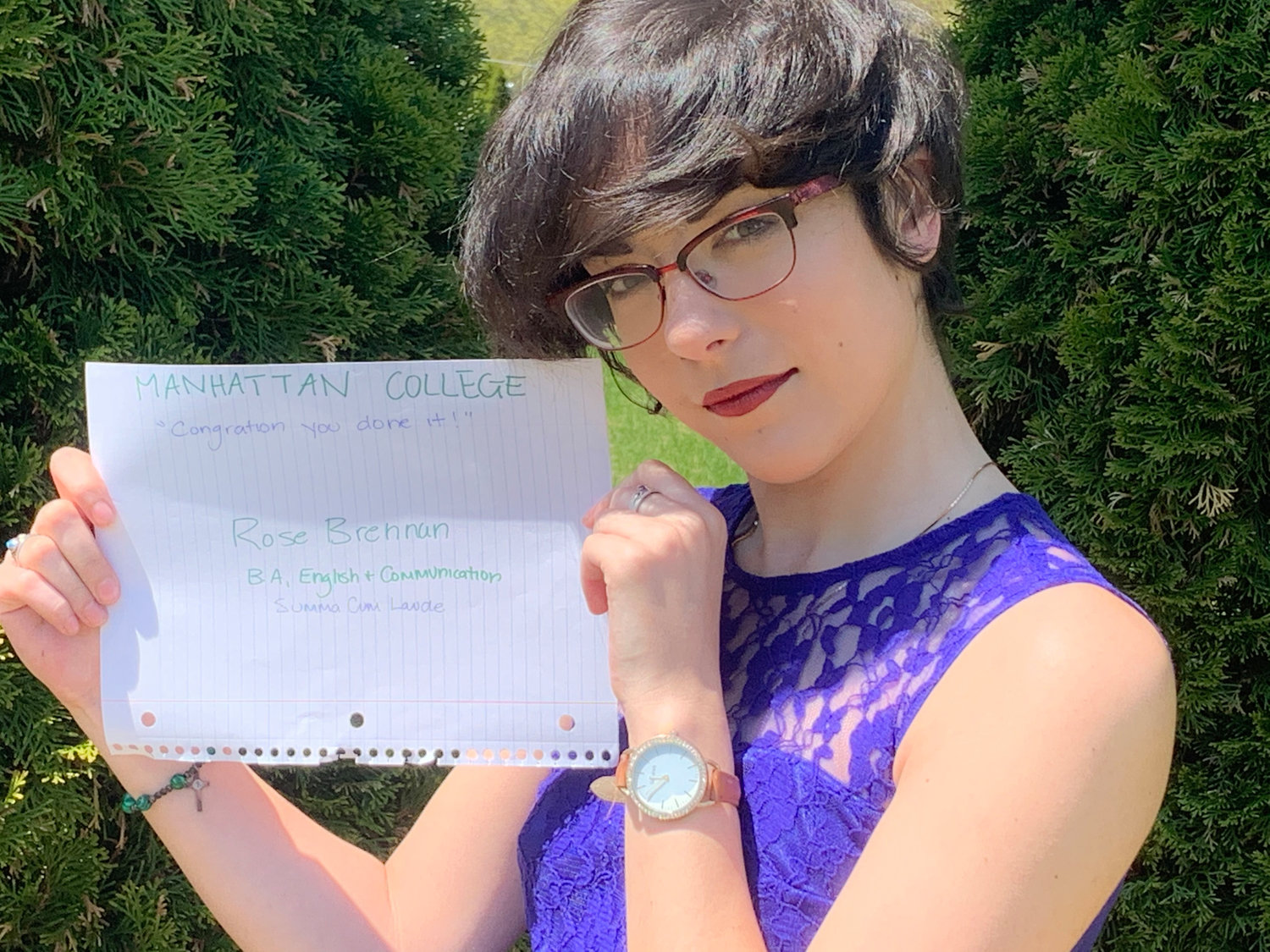 Rose Brennan, a member of Manhattan College’s Class of 2020, remained at home on May 15 — they day she was supposed to graduate. Due to the coronavirus pandemic, the college postponed its commencement ceremonies, which will now take place a year later — online, much to Brennan’s opposition.
Courtesy of Laura Brennan 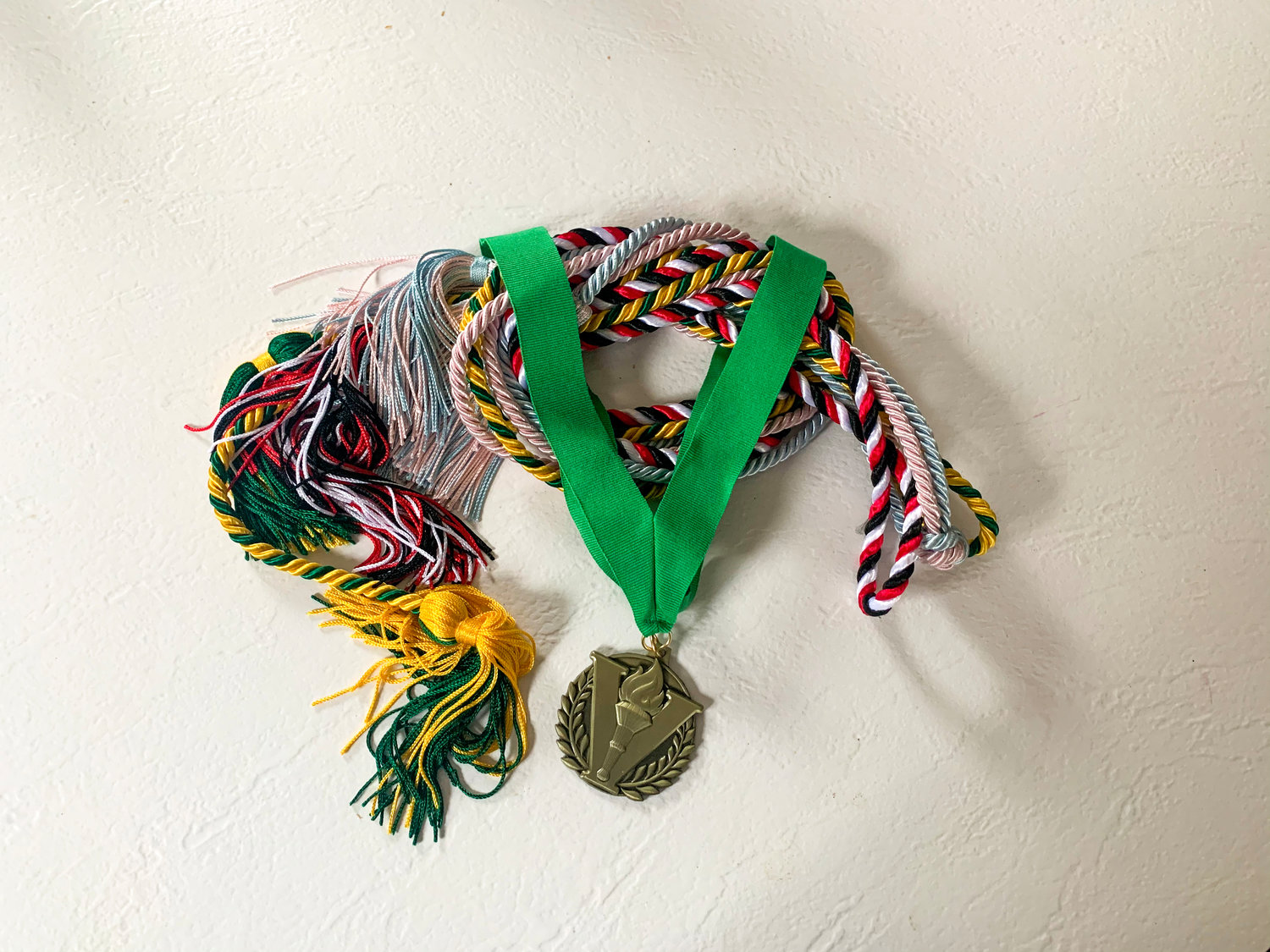 Some of Rose Brennan’s honor cords and medals are held together on her kitchen table. She’ll never get the opportunity to wear them to a graduation ceremony, as her class’ commencement ceremony will take place online, nearly a year after she actually graduated.
ROSE BRENNAN
Previous Next
By ROSE BRENNAN

It seems strange to claim you feel forgotten when a half-million people have died over the last year. But I think I’m still allowed to grieve what I lost — even if it isn’t necessarily a person.

At this time last year, I was a senior at Manhattan College, a member of the soon-to-be ill-fated Class of 2020. Right before spring break, we were informed campus was shutting down in-person operations for a few weeks due to growing concerns about the coronavirus pandemic. Certain everyone was making a big deal about nothing, I packed up two weeks’ worth of clothes and other supplies, waved goodbye to my roommates, and said, “See y’all on the other side.”

That “other side” never came, of course. I never returned to my apartment or campus after that day — March 10, 2020.

The next two months were a series of gut punches. First, classes moved online for the rest of the semester. Then, one by one, end-of-year and end-of-college events moved online or were canceled outright. No honors convocation. No senior formal. No baccalaureate Mass.

And then, the coup de grace — no graduation.

We were told to be patient. The administration promised they were committed to celebrating us — hopefully in-person — one way or another. Meanwhile, our friends at other colleges — including our neighbors at The Mount and Lehman — got some amount of closure through virtual commencement ceremonies.

Manhattan College’s Class of 2020, however, waited. And waited. Until last week — nine months later — when we were told that we, along with the Class of 2021, would have an online graduation anyway, one year after the fact, on May 8.

I know I wasn’t the only one who felt insulted by that email. And I know I’m not the only one from my graduating class who feels cast aside and forgotten.

It’s not just with graduation, either. I may have joked about it on Twitter at the time, but it took nine months for the college to congratulate me on making the dean’s list during my final semester. And I know the U.S. Postal Service was facing difficulties last year, but I didn’t even get my diploma until August. How’s that for being forgotten?

To add insult to injury, my alma mater’s administration didn’t even have the decency to send a separate email to my graduating class — choosing instead to lump it in with the Class of 2021’s bad news.

I’m sure this isn’t the case, but it feels like Manhattan College didn’t even try to celebrate us the way we deserved. And in my opinion, the time for a virtual graduation has passed. That time was last May, when every other college did it.

And while I may have had mixed feelings about graduating over Zoom, at least it would’ve been appropriate then.

I’ve spoken with Kaylyn Atkins, former student body president and a fellow class member. She and her administration are still fighting for us to have an in-person celebration of some sort, and I applaud her for doing so.

I understand the worries surrounding the coronavirus pandemic. I’ve been as cautious as I could possibly be for the past year, as I live with someone who’s immuno-compromised. But I’m willing to wait until it’s safe — even if it’s another year down the line — if it means the college will celebrate us in the way we deserve.

Our class isn’t asking for much. When Kaylyn and I spoke, there seemed to be a common list of four demands from members of our graduating class. And in my opinion, none of them are out of the question.

First, we want some sort of in-person celebration. Whether that’s a commencement ceremony split up by school or major or some other proper send-off remains to be seen. If for some reason none of the in-person alternatives are truly feasible, we’re asking for a full refund of our $400 graduation fee — still outstanding as of March 2.

Second, we want all of our academic regalia sent to our homes, whether we choose to attend any send-off ceremony or not. As we left campus right before honor cords, medals, stoles, caps and gowns would traditionally be distributed, we would like to have them after the fact. I personally only received three of the six cords I earned through honor society and club membership — one of which I had to order online.

Third, we would like some sort of senior gift from the administration. This is the absolute bare minimum they could do following what I view as a complete failure to acknowledge our graduating class.

Finally, we would like to take senior portraits in our academic regalia — as they are mementos every other graduating class either had or will have.

Graduating college is a feat in and of itself. Some of us are the first in our families to go to college. Some of us are international students. All of us had to balance school, work, family and everything in between — and we did it successfully. Never mind that we did it during a pandemic.

My graduating class certainly deserves more from Manhattan College than a comically overdue Zoom graduation. We don’t deserve to be treated like a loose end to tie up.