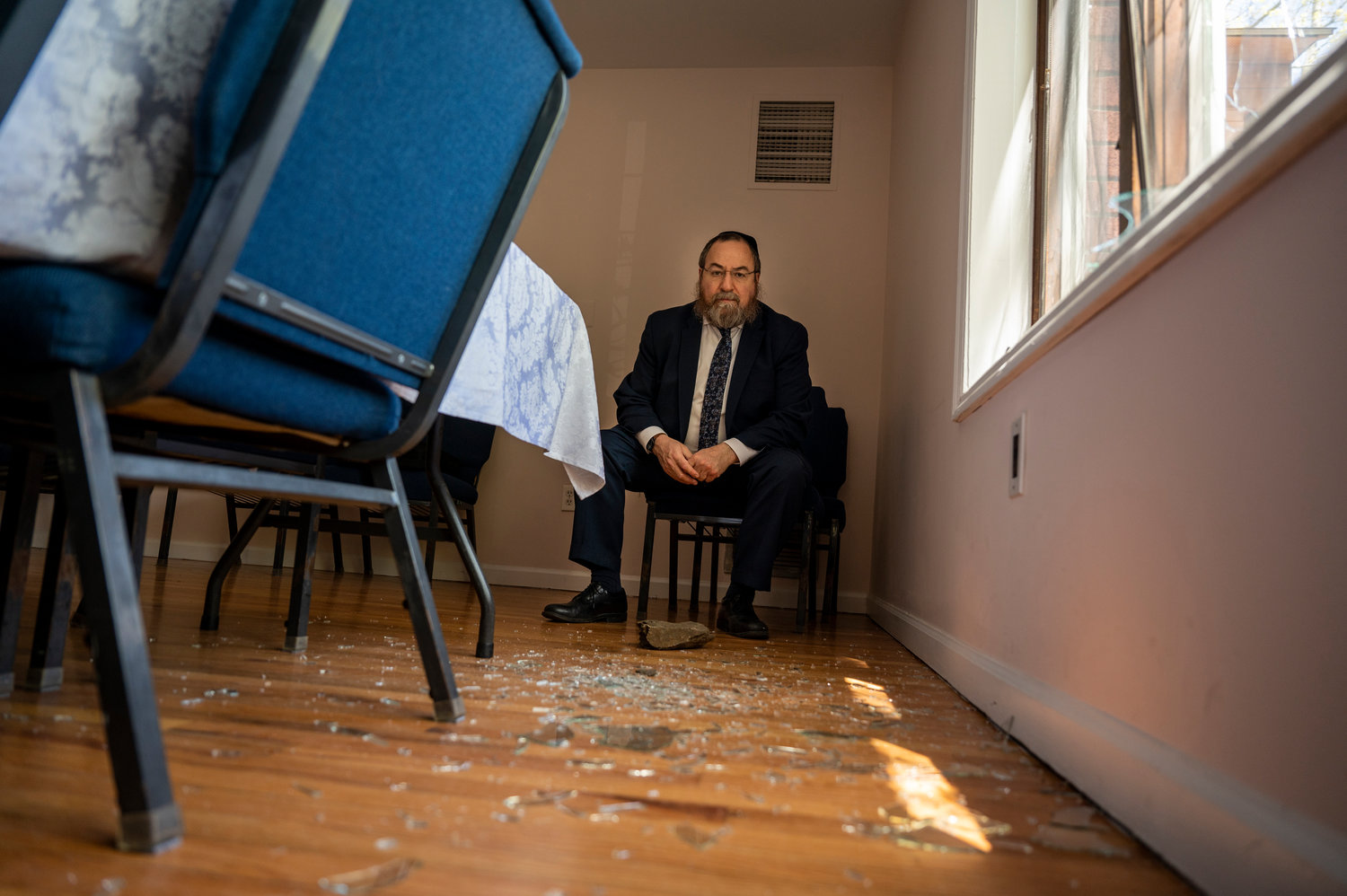 Rabbi Levi Shemtov says he’s very disturbed by the vandalism of his synagogue, Chabad Lubavitch of Riverdale, last April when his shul was one of four targeted by a person police suspects smashed windows with rocks.
HIRAM ALEJANDRO DURÃN / File
Caught in the act

Surveillance video captured the vandal throwing rocks through windows of one of several Riverdale-area synagogues targeted in the crime spree. Watch the video by clicking here.

A grand jury has indicted a 30-year-old Whitehall man on multiple charges — including criminal mischief and hate crimes — over a vandalism spree last spring that targeted several synagogues in the greater Riverdale area.

Jordan Burnette, of 3333 Henry Hudson Parkway, was arraigned Friday on a 76-count indictment that includes criminal trespass, criminal mischief, aggravated harassment, burglary and petty larceny — many of them charged additionally as hate crimes. Designating such charges as hate crimes could carry higher sentences and fines, if convicted.

Bronx District Attorney Darcel Clark is accusing Burnette of breaking windows and wreaking havoc at four different synagogues over a three-day period last April, beginning with a pulled fire alarm around dinnertime on the evening of April 21 at Riverdale Jewish Center, 3700 Independence Ave. The next day, Clark says Burnette returned, throwing rocks at the front door, shattering windows and a front glass door.

Burnette allegedly moved on to West 246th Street on April 23, the home of Chabad Lubavitch of Riverdale, throwing rocks there and shattering glass windows and doors.

The terror continued the next night with rocks thrown at the windows of both Young Israel of Riverdale at 4502 Henry Hudson Parkway, and Conservative Synagogue Adath Israel of Riverdale up the parkway a mile north.  Burnette also allegedly returned to Riverdale Jewish Center to break a front glass door and side windows.

The last attack occurred on May 1 where Clark says Burnette returned to CSAIR to steal a bicycle from a storage shed and damage several religious books that were stored there.

"Those shameful incidents brought fear and terror to worshippers," Clark said, in a release. "To our Bronx Jewish community, we support you. We are also horrified about these attacks. We live in a vibrant, diverse community, and we are united against these appalling acts."

Police arrested Burnette soon after the CSAIR burglary on 42 charges. He was released back to his Spuyten Duyvil home at the time under "supervised release" while he awaited trial. Many Jewish centers in and around Riverdale kept overnight police presence for weeks, even after Burnette's arrest.

On the day following the attack on his synagogue, Chabad Lubavitch rabbi Levi Shemtov surveyed the broken glass all over the floor, worried what he was seeing was more the beginning of worse atrocities, and not just an isolated incident.

"With anti-Semitism on the rise, unfortunately some cowards, some deranged people, are just following along with other anti-Semites," Shemtov told The Riverdale Press at the time. "I just hope we catch them right away, and there are no copycats."

After Burnette's arrest, CSAIR rabbi Barry Dov Katz told his congregants it was important for them to "continue living proud and joyful Jewish lives."

"We are a strong community, and this was a horrible attack that feels like a violation of our sacred place," the rabbi said. "So that's the response to hate. To people who might want you to not be who you are. To celebrate that."

It was not immediately clear what kind of criminal penalties Burnette could face if convicted, but he's not due back in court until next January.