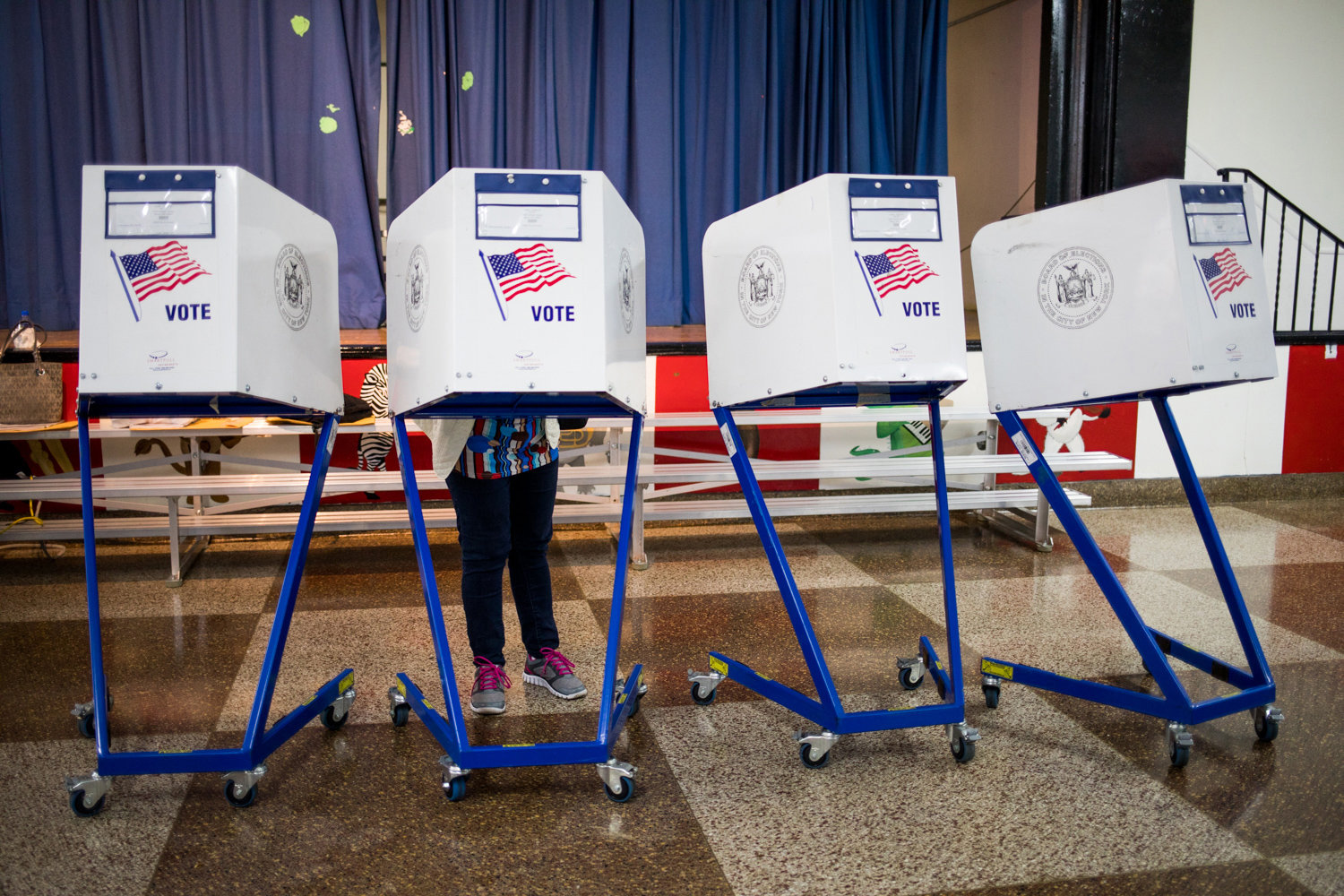 While last June’s Democratic primary probably determined the most important elections in the city, voters can still have an impact this November by filling out five proposals on the backside of their ballots. The third and fourth proposals are long-term goals from voting rights advocates, intended to eliminate the requirement to register to vote 10 days before an election and to let people vote absentee without an excuse.
JULIUS CONSTANTINE MOTAL/ File 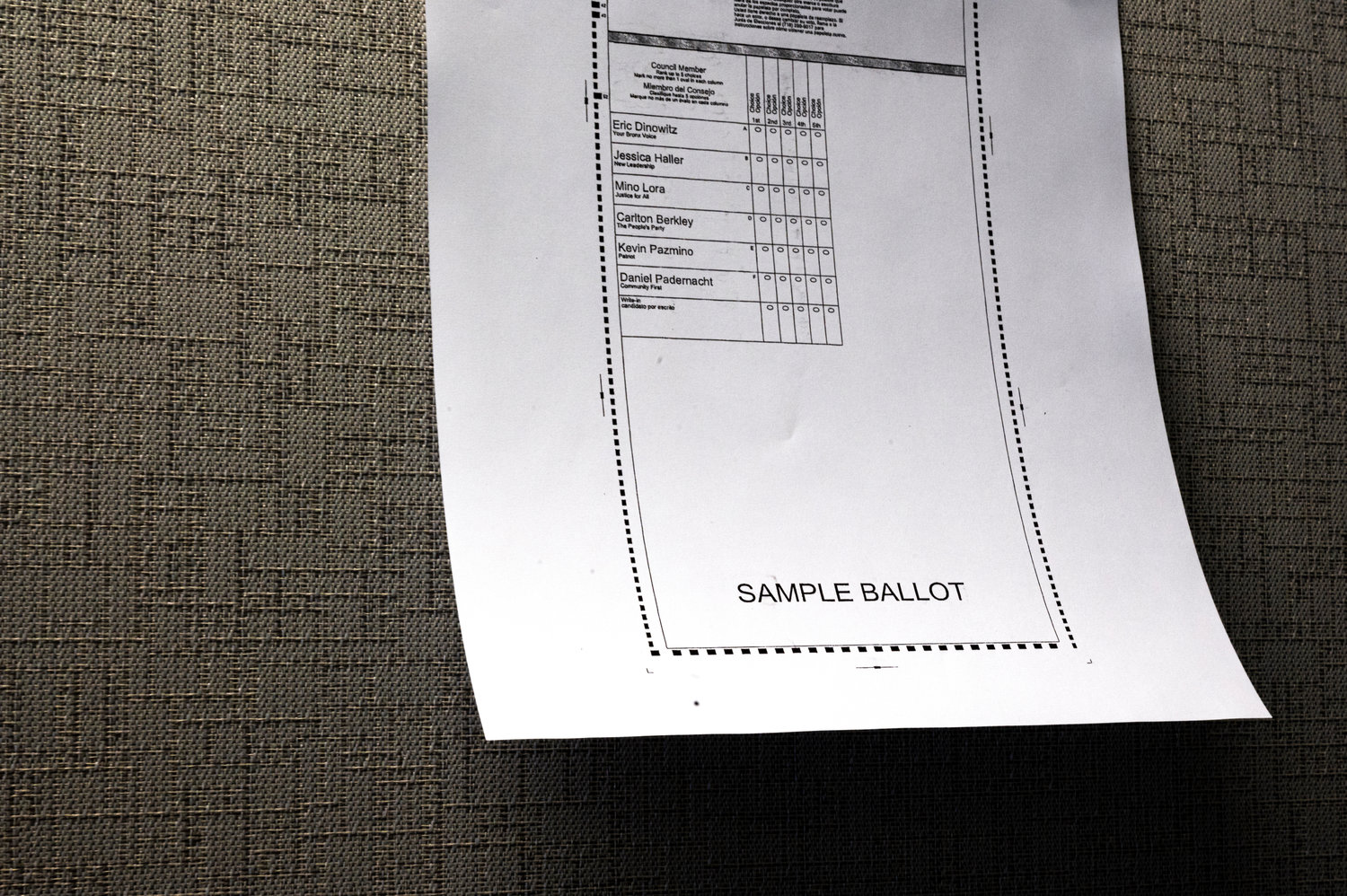 Make sure to turn over your ballot on election day this November to find five ballot proposals. Two of these proposals are aimed at making it easier for people to register to vote and to vote absentee without an excuse.
HIRAM ALEJANDRO DURÁN/ File
Previous Next
By ETHAN STARK-MILLER

It’s no secret that in New York City, political contests are usually decided in primaries. General elections? More often than not, they are nothing more than a formality.

That’s thanks to the city’s solidly blue political makeup. And it’s why many already see it as a foregone conclusion that Brooklyn borough president Eric Adams will be the city’s next mayor, even though he has yet to beat his Republican rival, Curtis Sliwa.

The same also is true for a majority of the other upcoming November contests for positions that include city council, comptroller and public advocate.

So, why should anyone care about the November general elections this year?

The answer can be found on the backside of the ballot, where voters will have the opportunity to vote on five proposals that, if passed, would amend various parts of the state constitution. Each of these proposals started out as a bill in front of both the Assembly and senate, which were required to pass both chambers in two consecutive legislative sessions.

The proposals address several areas that include making alterations to the redistricting process, giving state residents a right to environmental protections, and increasing the amount of money people can sue for in New York City civil courts. But it’s the third and fourth provisions — intended to make voting easier — that would most clearly accomplish the long-time goals of good government groups like Common Cause New York and the Let NY Vote coalition.

“They are long-standing priorities of ours,” said Common Cause’s executive director Susan Lerner. “The two amendments help bring our elections up to a 21st century standard.”

Because the registration deadlines aren’t intuitive, they often make it harder for people to vote, Lerner said. This is especially true for people who just moved to New York from another state, recently turned 18, or just attained U.S. citizenship.

“Our registration process is often confusing,” Lerner said. “The deadlines are not well publicized. And so people are often disenfranchised inadvertently from their point of view. Where they find out, ‘Oh my God, it had never occurred to me that the deadline would be that far away from the election. I didn’t know, otherwise I would have registered.’”

While the amendment would eliminate the 10-day registration requirement, Lerner said, it wouldn’t immediately implement a new deadline. So, the state legislature will still have to pass a bill setting a new timeline for would-be voters to register. Lerner’s organization supports the idea of same-day registration, she said, which would allow people to sign up to vote on election day itself.

“So the purpose here is to remove a barrier,” Lerner said. “To simplify the process. And to allow for registration to take place when the vast majority are paying attention to elections, which is much closer to the election — or on election day itself.”

Former city Campaign Finance Board general counsel Sue Dodell says when drafting this legislation, it’s important lawmakers consider whether the new registration deadline will be for primaries as well as general elections.

“In New York City, the critical thing is being registered before the primary because that’s where most of the action is,” she said. “So, we’ll have to see what the state legislature does, whether they differentiate between primary elections and general elections.”

Oswego Assemblyman Will Barclay is opposed to amendment, telling Spectrum News a 10-day waiting period is “not onerous,” and that allowing same-day registration could open the system to “shenanigans.”

“Fraud has been raised, obviously,” the Republican told NY1. “Without a timeline, it makes it a little easier for someone to register to vote and to change that vote. It’s always more difficult after the fact.”

Some Republicans are also opposed to the fourth ballot proposal, which complements the third by allowing voters to cast absentee ballots without needing a specific excuse. At the moment, state law says voters can’t request an absentee ballot unless they have an illness, physical disability or will be out of the county on election day.

Republican party chair Nick Langworthy told Spectrum he would only support such a measure if it implemented some way to force voter identification.

“I don’t think we have to expand mail-in voting any more than we have,” he said. “You can basically vote for a month in the state of New York.”

When the coronavirus pandemic first arrived last year, then-Gov. Andrew Cuomo signed an executive order allowing all state voters to request an absentee ballot to avoid contracting the virus that causes COVID-19 at a polling site.

And according to Lerner, this emergency action encouraged more people to vote absentee.

“What we saw was an enormous increase in the number of people who took advantage of absentee voting, which is absolutely what we want to see,” she said. “If people are at all concerned that they will not be able to make it, you know, you’re unclear whether you’re going to have a required business trip out of town, so you can’t swear under penalty of perjury 15 days earlier that you’re going to be away. But you would like to vote by mail because you’re just not sure. Then it shouldn’t be hard for you to get an absentee ballot.”

Because of the large number of people working jobs that don’t allow them time to vote at a polling location, Dodell believes having no-excuse absentee could increase the overall number of people who ultimately vote.

“We in New York City have a lot of workers who work hours that are different from the ones where the polls are open,” she said.

“So, I think it does encourage voting, and anything that encourages more participation is, in my mind, something very good.”

While Dodell and Lerner believe most people will vote for these ballot measures, the real challenge is letting the public know they’re on the ballot in the first place.

“I think it’s hard,” Lerner said. “This is not necessarily a high-turnout general election. Certainly, we’re going to do everything we can to let people know (to) turn over the ballot and vote on the ballot measures.”