After 58 years, iconic barbershop may succumb to rent hike 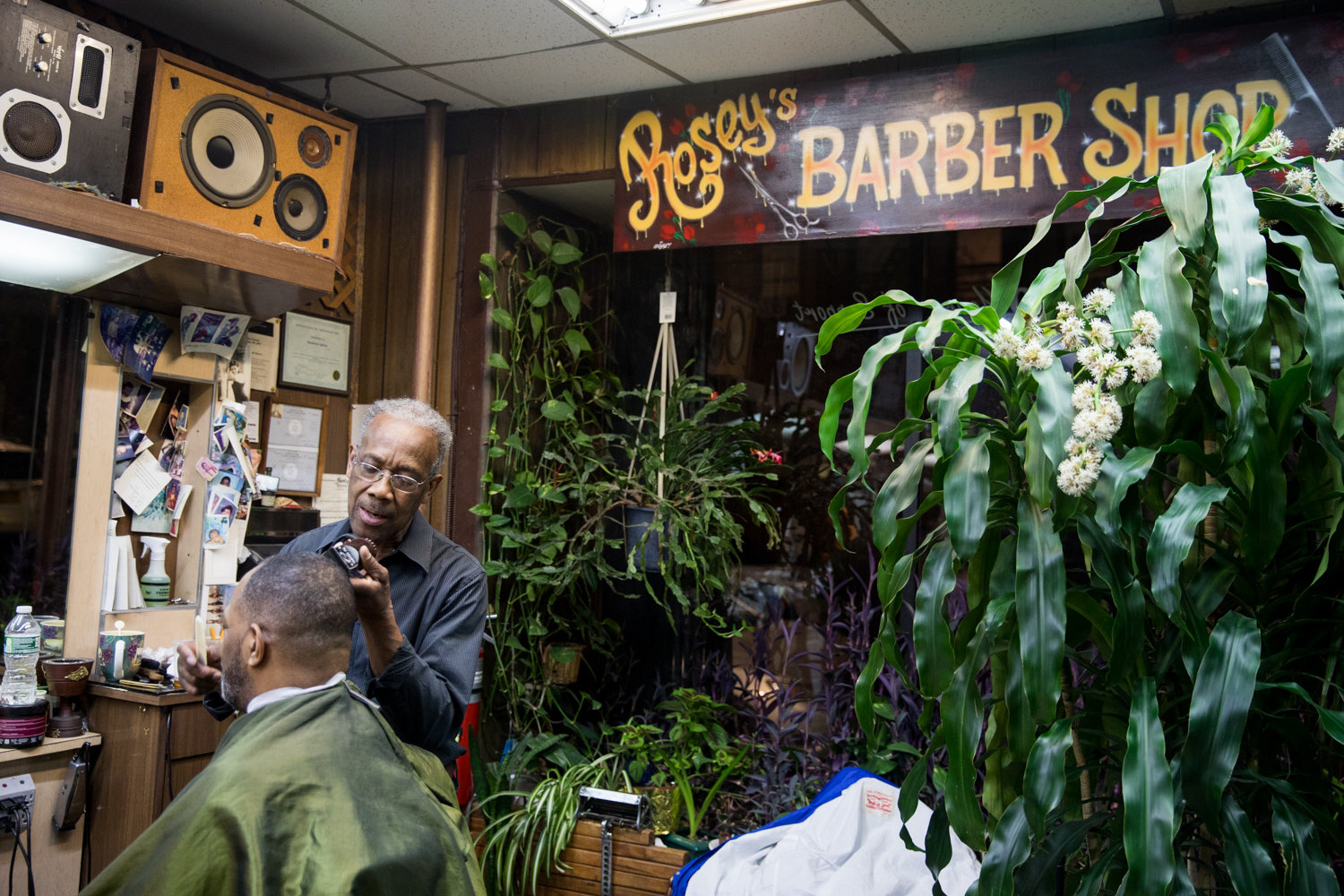 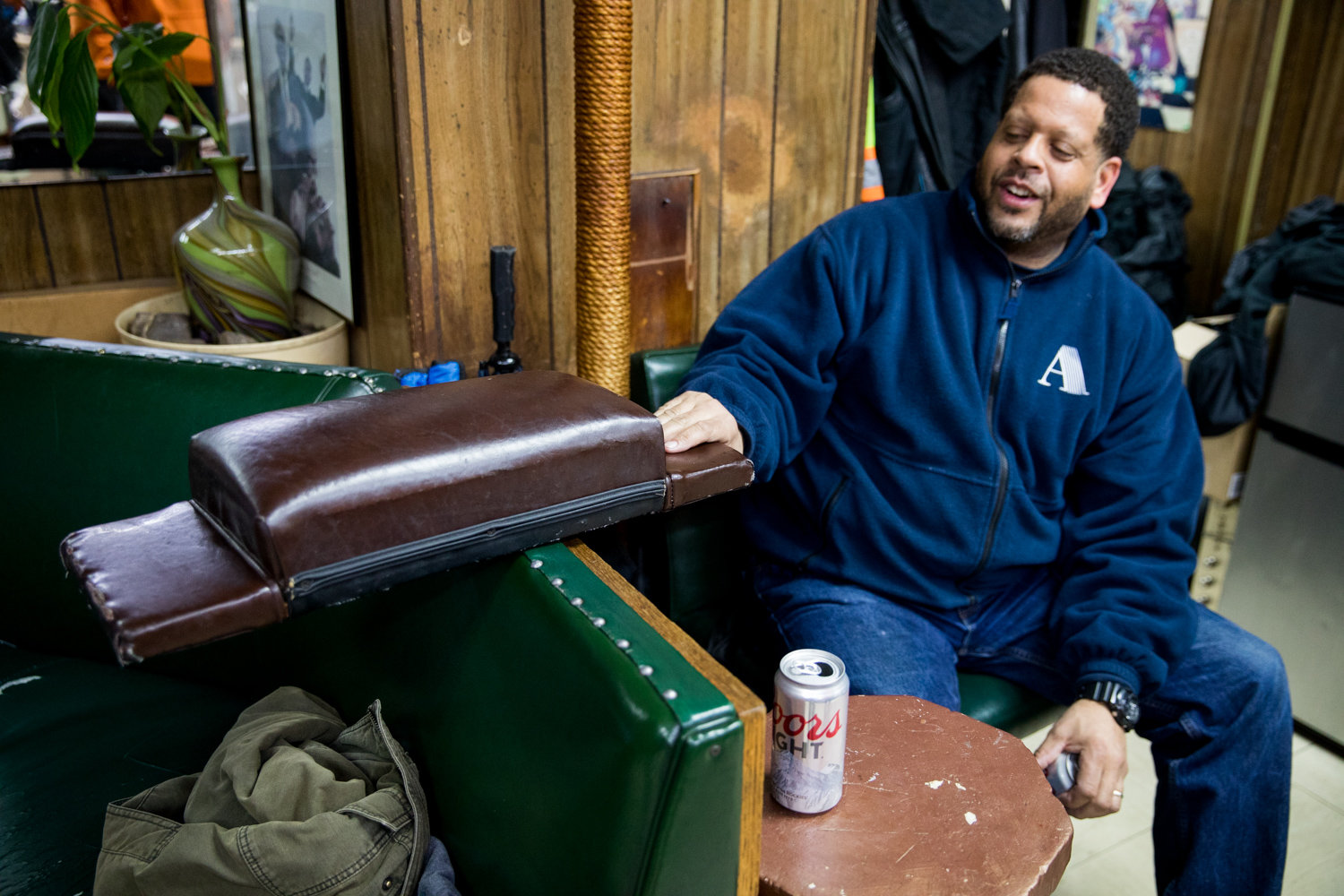 Scott Dread holds the booster seat he and many others sat on as children at Marble Hill’s International Unisex Salon where they’ve been getting haircuts most of their lives. The salon’s workers and customers are banding together after owner Roosevelt Spivey was told his monthly rent would increase by $1,500.
JULIUS CONSTANTINE MOTAL 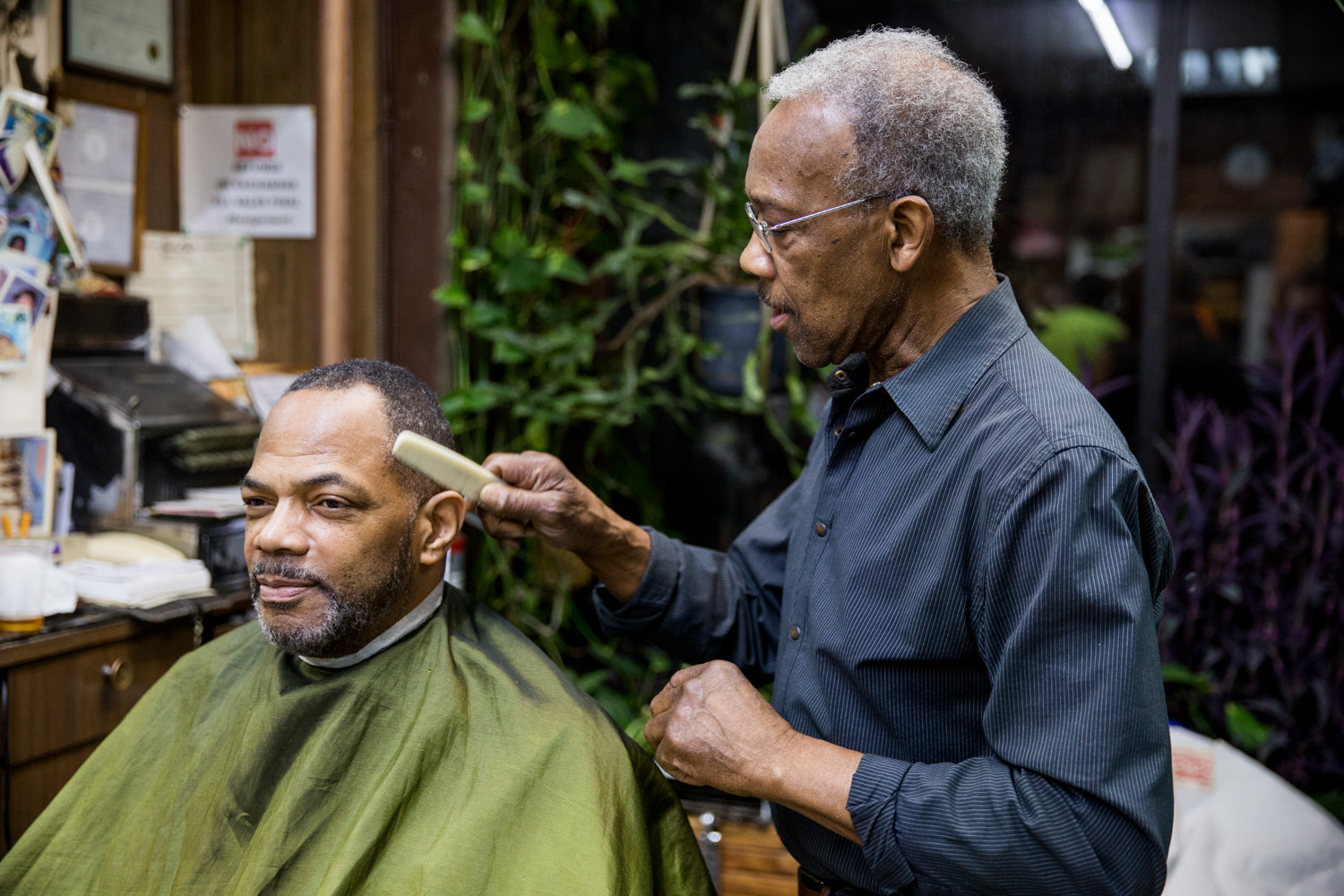 Roosevelt Spivey combs J. Loren Russell’s hair in Marble Hill’s International Unisex Salon, which he’s had for the last 58 years. Now, Spivey is figuring out how to make ends meet after learning from his landlord his monthly rent is jumping by $1,500.
JULIUS CONSTANTINE MOTAL 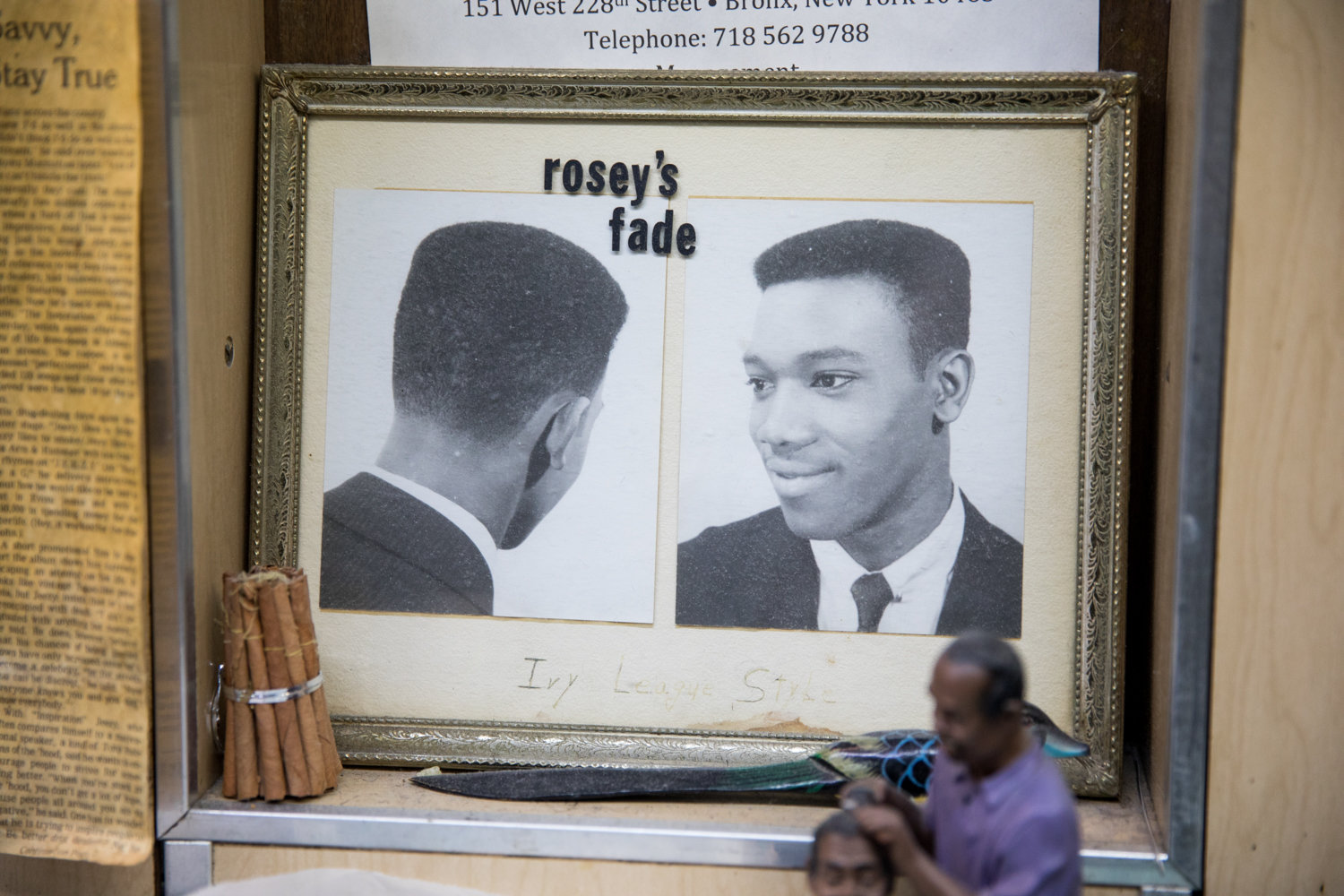 A diptych shows a hairstyle labeled ‘Rosey’s fade’ in Marble Hill’s International Unisex Salon, which is owned by Roosevelt ‘Rosey’ Spivey. The salon is facing an uncertain future after being hit with a $1,500 rent hike.
JULIUS CONSTANTINE MOTAL 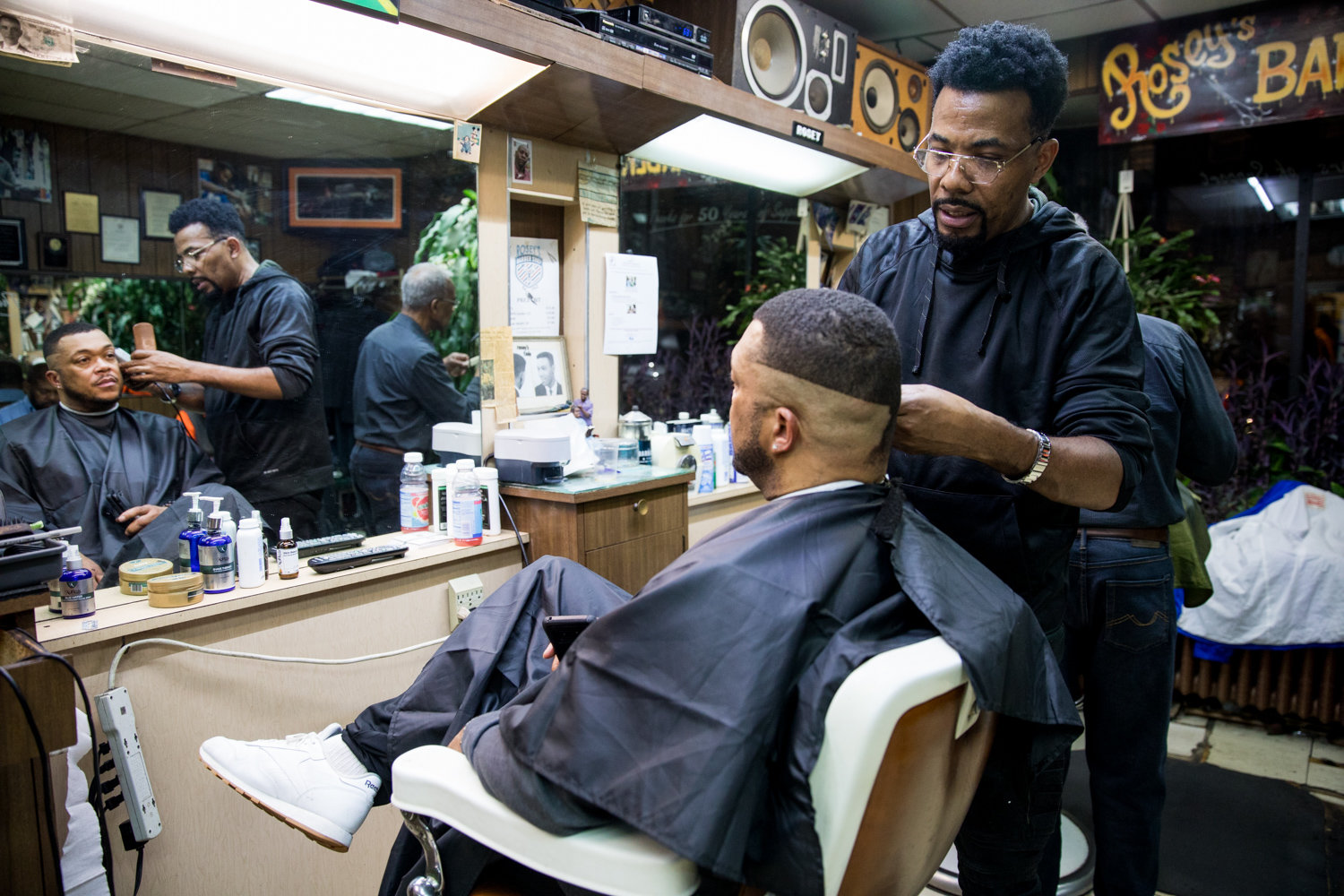 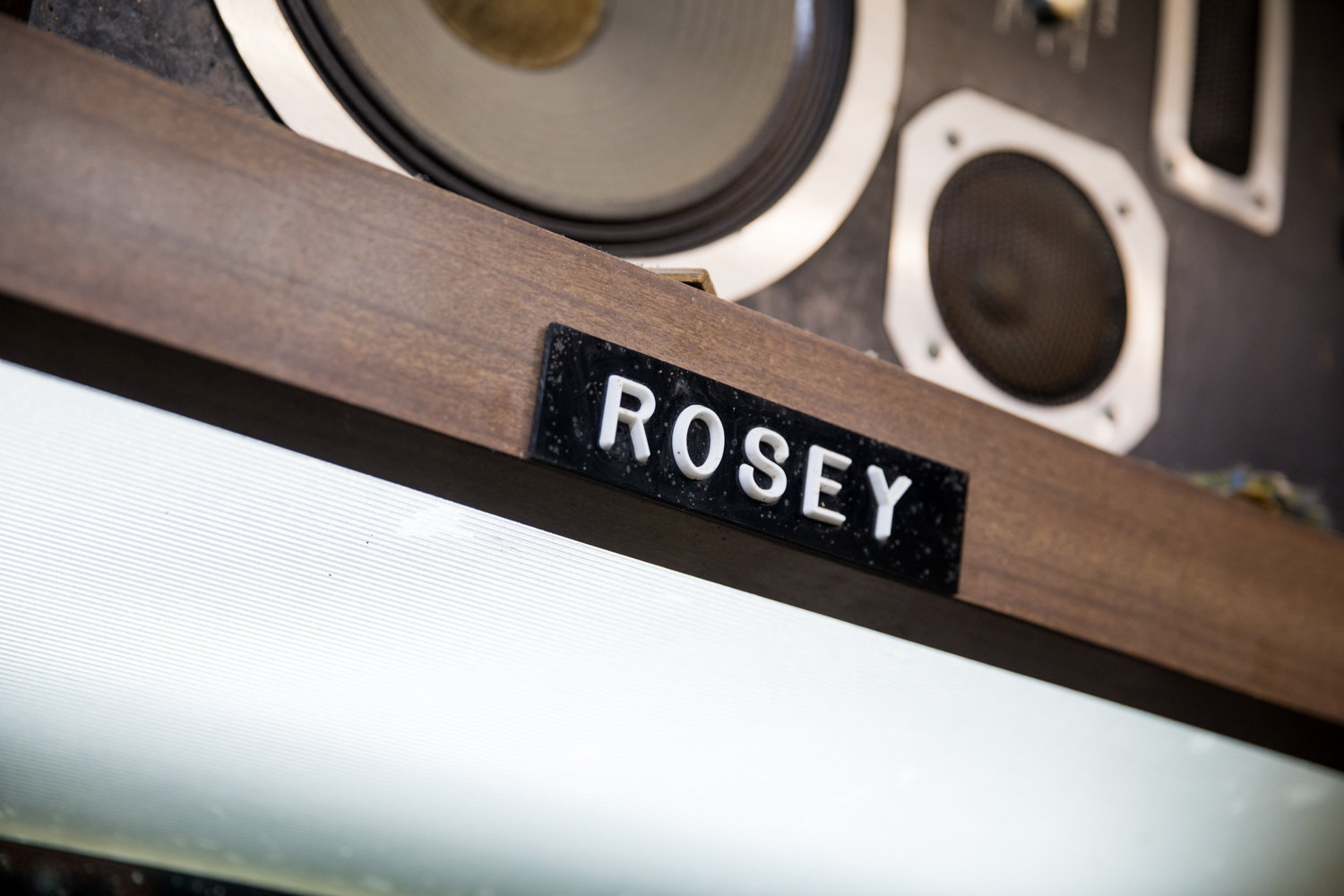 Roosevelt Spivey has cut hair on the corner of West 228th Street and Marble Hill Avenue for nearly six decades.

Known by many of his friends and customers as “Rosey,” Spivey first took over Marble Hill’s International Unisex Salon in 1962. Back then, Marble Hill was a mostly white neighborhood of working-class Irish and Italian customers. By the middle of that decade, though, those residents started moving out, and the North Carolina native started finding himself serving an increasingly black community.

Today, Rosey’s Barber Shop, as many informally call it, is almost always packed to the brim with customers, both new and old. The walls are adorned with pictures of clients both old and young, along with more than a few proclamations and notable citations from local elected officials like former U.S. Rep. Charlie Rangel and current U.S. Rep. Adriano Espaillat, as well as some local news coverage from this very newspaper.

On Friday, in fact, most of the people in the shop weren’t even getting their hair cut. They simply stopped in for a chat with Spivey, his assistant manager Garfield Myrie, and their childhood friends — all of whom have been patrons of Rosey’s Barber Shop since childhood.

“I got four generations that I am working on right now, and the fifth one is in process,” Spivey said of his clientele. “I know all the people in the neighborhood like family.”

Take Joe White, for example, who grew up in the neighborhood but left in 1985 for the military. Since then, White has remained active in uniform, even working at the Pentagon in Washington, a city he still calls home.

But all that might be coming to an end sooner than anyone thought. After 58 years in Marble Hill, Spivey — who turns 81 next month — was told by his landlord in a letter that his monthly rent was doubling from $1,400 to $2,900.

The new price takes effect April 1, unless Spivey can find some way to talk the landlord down.

“There is no way the shop can sustain that $2,900 a month, even if I raise the prices to 25 cents a head,” he said, pointing to the price chart near his chair, which customers say hasn’t changed in decades.

“Unbelievable. The man is a fixture in the community,” said Walter Watson, a 54-year-old bus driver who has had Spivey cut his hair for as long as he can remember.

“What are they going to replace us with? Another doughnut shop or whatever? This place is a fixture to all the kids who’ve grown up here.”

Fighting over rent is nothing new for Spivey and his 151 W. 228th St., location.  The landlord tried to bump Spivey’s rent in 2015, but the might of Charlie Rangel was enough to convince the landlord to leave Spivey’s rent alone.

But Rangel is now long retired, and even that landlord is long gone. Abraham Rosenstock sold the building the barbershop calls home in 2017. The new landlord is not much more than a piece of paper with a corporate name: 11 West 172 LLC. The company’s registered address is 199 Lee Ave., in the South Williamsburg neighborhood of Brooklyn, a building that is reportedly home to 1,391 other such limited liability corporations belonging to hundreds of landlords.

According to real estate news outlet The Real Deal, the Brooklyn address has one landlord’s LLC for every 2.5 square feet of real estate in the building. The landlord has not responded to any calls or requests for comment, except to say that whatever plans he has for the space is his own business.

In the meantime, Spivey has reached out to the community and local elected officials for help holding onto his shop, which longtime customer Scott Dread claimed was the only black-owned business left in the neighborhood.

Spivey’s customers highlighted how important the business has been — not just to them, but their parents and children who have also been clients of Marble Hill’s International Unisex Salon over the last 58 years.

“We come back here, and it’s not just coming to sit and talk, but it’s a family place,” White said. “You feel that sense of home to this community, which is absent when you walk out of that door.”

As the Rev. J. Loren Russell put it: Spivey’s shop contributes more to Marble Hill than simply being a place of business. Its social component is much more important.

“In black communities in particular, barber shops have a presence. It is where we come to have our history and our engagement. This is more than a place where we come to get our hair cut,” said Russell, an associate pastor at two churches in the South Bronx, as he waited to get the same cut Spivey has given him every week for the past 40 years.

“So, if (he) leaves,” Russell said, “that means there is no place in the community for everyone to come together and galvanize.”