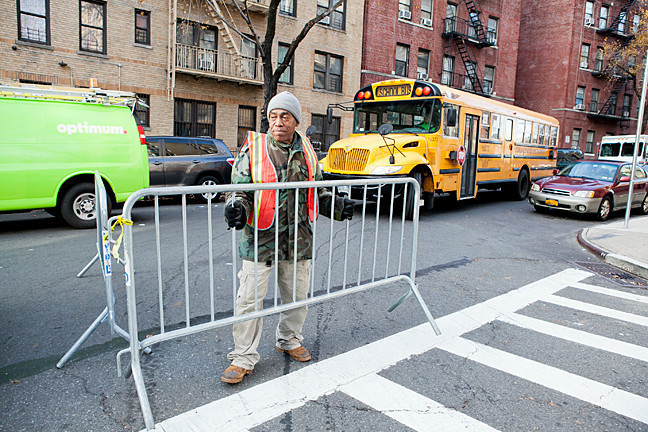 Roberto Northover, 60, volunteers his time to close the street on Webb Avenue and Eames Place near the Kingsbridge Heights school where an 8-year-old child was killed.
Marisol Díaz/The Riverdale Press 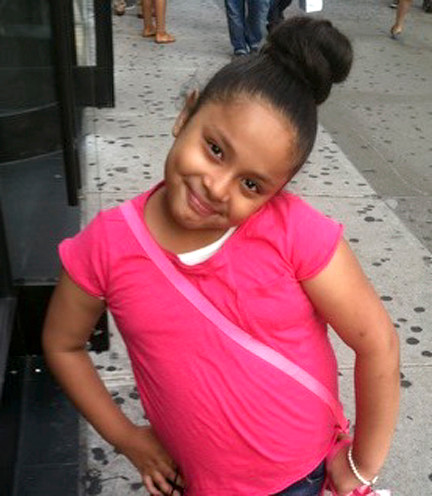 Over a month after 8-year-old Rylee Ramos was struck and killed by a car outside her elementary school, parents are left to implement traffic safety measures themselves while waiting for crossing guards and other official steps at the Luisa Pineiro Fuentes School of Science and Discovery (P.S. 307) in Kingsbridge Heights.

“It’s not fair that my niece’s death is going to be in vain because no one is doing anything,” Rylee’s aunt Joanna Torres said while waiting outside the school with her sister Sandra Leon on Dec. 4 around dismissal time.

“This is supposed to be a safe haven, a safe place. Kids did not want to come back to school because of this,” Ms. Leon said near the spot where a makeshift memorial for Rylee with cards, balloons and pictures had stood for several weeks after her death.

Ms. Torres and Ms. Leon’s niece was killed on Oct. 24 when a 55-year-old woman reversed her Honda Accord down Claflin Avenue, smashed into a metal fence outside a house and struck a group of 10 women and children, including Rylee and her mother. The parent was released from the hospital shortly after the incident without serious injuries. The driver has not been charged, though police said an investigation is ongoing.

Since the girl’s death, Ms. Leon, 39, and Ms. Torres, 37, have been on a mission: to improve traffic safety for other students at the school on Eames Place. Rylee’s 7-year-old brother and her cousin, Ms. Torres’ daughter, are students there.

P.S. 307 is located between Webb Avenue and Claflin Avenue. The women have called for speed bumps on both streets along with crossing guards and police cameras to monitor speed and illegal parking on Eames Place.

But in the absence of permanent measures, students traveling to and from school have relied on a small group of volunteers who came forward after they heard of Rylee's death. At the start and end of every school day, volunteers place metal barricades at the Webb Avenue intersection and orange cones at Claflin Avenue. They direct traffic themselves as students cross the streets.

“If our school was located in Manhattan or Brooklyn or Queens…” Ms. Torres said.