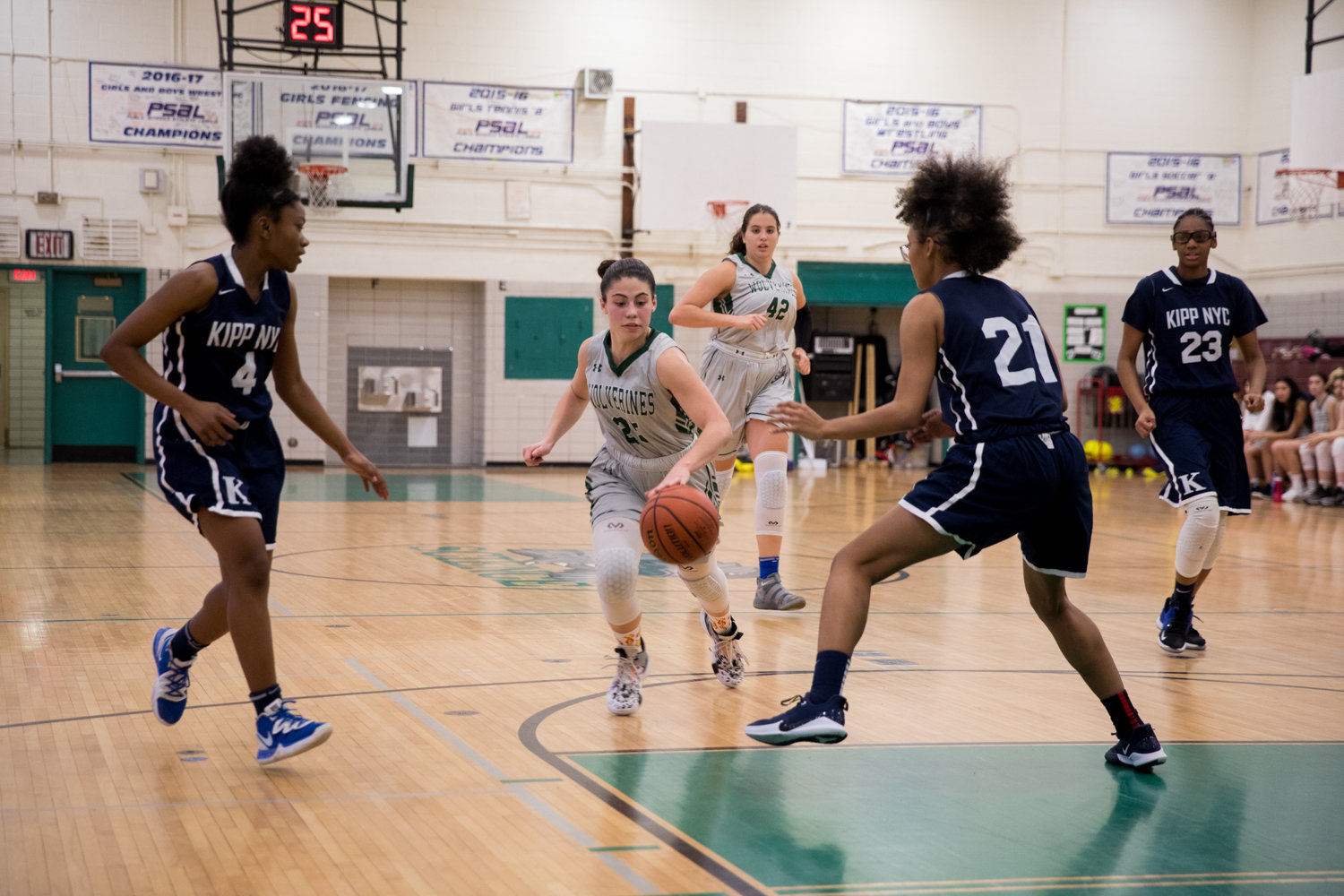 Bronx Science’s Carolina Lopez had a team-high 16 points in the Wolverines’ victory over Longwood, a win that clinched the division title for Science.
JULIUS CONSTANTINE MOTAL / File 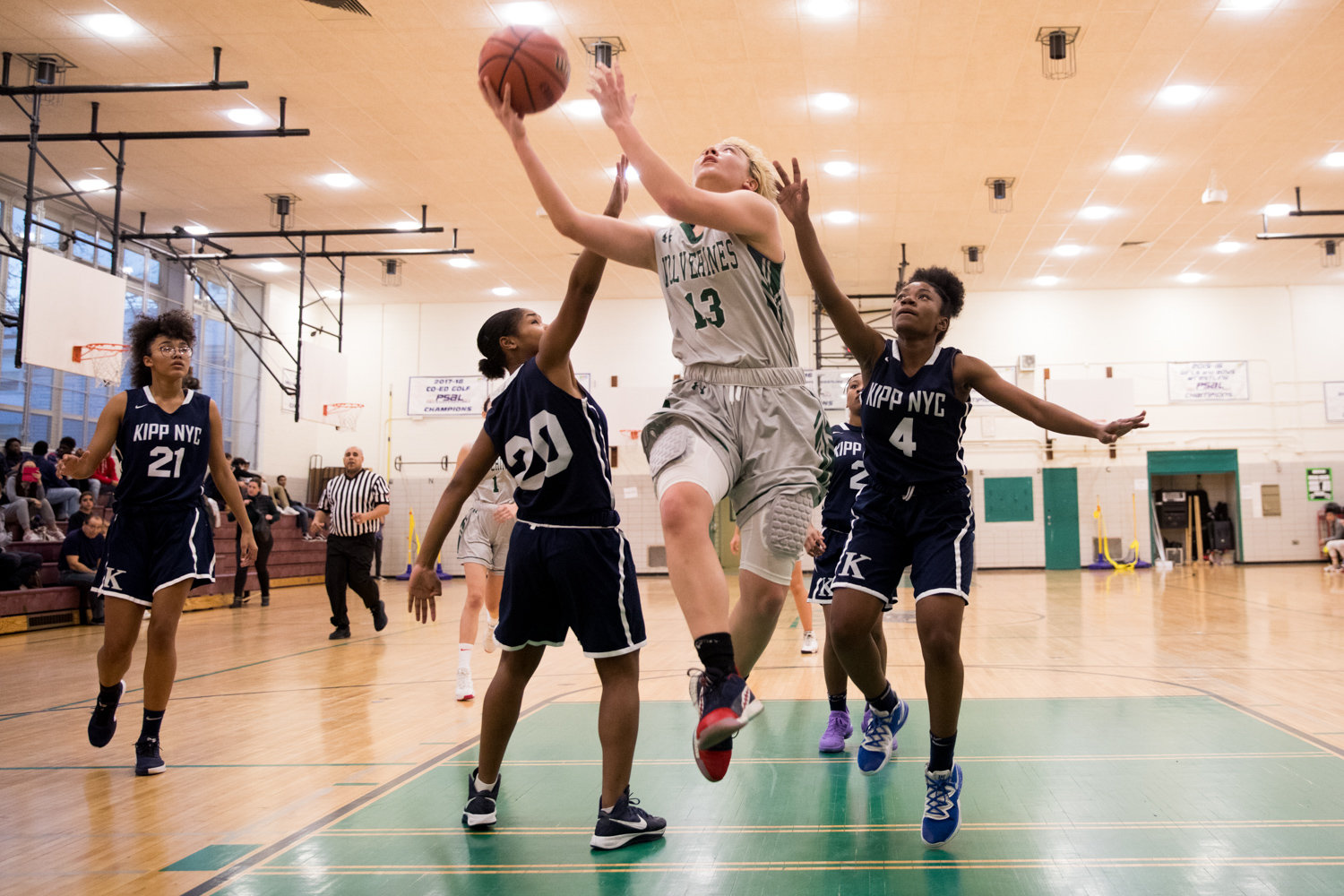 Last week brought the end of the regular season for the Bronx Science girls basketball team, and with it two very important goals to achieve before the postseason tipped off.

First, knock off Longwood and the Wolverines would capture the Bronx A South Division title for the second time in the past three seasons. Second, close out the regular season with a win over Evander, and Science would most likely be looking at the top seed among all Bronx teams for the Public School Athletic League postseason dance.

And just to add to the level of difficulty, Science would have to win both those games on the road.

Carolina Lopez scored 16 points, Anna Vikatos added 11, and Lillian Flynn logged 10 points as Science captured their division title with a 52-50 victory over Longwood. Then it was the Sarang West show against Evander as the junior guard scored 20 points en route to a 39-29 win over the Lady Tigers. That allowed Bronx Science to finish the regular season with a hearty 17-2 record.

West scored 11 of Science’s 14 first-half points in the Evander game, finishing the contest with five three-pointers. But it was her final one, with 1:39 left in the game, that finally delivered the dagger to the Lady Tigers.

“I definitely think that did it,” West said. “I even heard one of their players say, ‘That’s it. It’s over.’”

It was a dominating individual performance that Bronx Science head coach Michael Mei has seen time and again from West.

“Sarang’s a fierce competitor,” Mei said. “There are periods in the season, and in each game, where she just puts the team on her shoulders and we go.”

West and her Wolverines teammates thought defeating Evander would be much easier than it turned out to be, however.

“We were definitely coming into this game expecting kind of an easier fight,” West said. “But these past two games have been real battles for us. So we have to get back to being a team right now. Now that we’re going to the playoffs, we have to play like a team. No more individual basketball. We all have to step up and show up.”

But both Mei and West believe playing a pair of grind-it-out games to close out the regular season will benefit the Wolverines in the long run.

“I think it helps us,” West said. “These are the kinds of games you expect to play in the playoffs. So when it comes to crunch time, we’re going to need people to be familiar with the situations that they’re in and be able to perform.”

Last Saturday the PSAL’s selection committee rewarded the Wolverines by handing them the No. 4 seed in the citywide playoffs, which were set to begin Feb. 10. Science received a bye in the first round and is scheduled to meet the winner of the Hunter-Hillcrest first-round matchup on Feb. 14 at 5 p.m. Hunter finished the regular season 8-4 while Hillcrest ended up 9-7.

Mei felt his team would be in line for a top seed considering the season they had this year.

“The Bronx is tough,” Mei said. “There are a lot of athletes in this borough. But I think we made a case (for a high seed). I think we deserved that.”

It was a tough final week, but a successful one for the Wolverines. Now West just needs to see all her teammates on the same page once the postseason gets under way.