Al fresco dining survives to live yet another day in city

Sidewalk cafes have produced success for some restaurants, but are simply a mixed bag for others 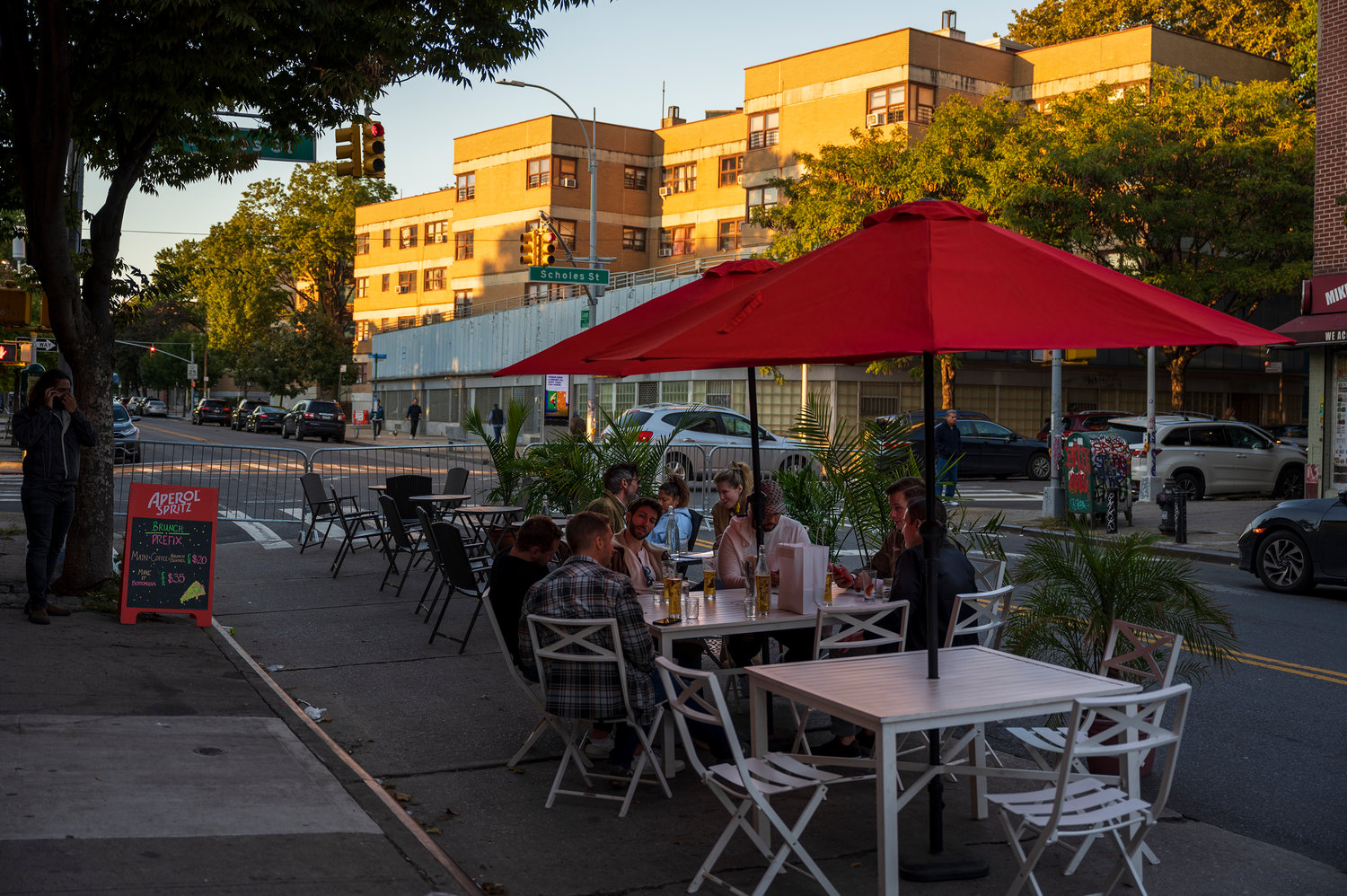 Legislation working its way through city council would make outdoor dining permanent throughout the city, while at the same time scrapping the enclosed sheds that have drawn constant criticism.
Hiram Alejandro Durán
By Sachi McClendon

Outdoor dining is here to stay — at least for the time being. That’s because an appellate court last week dismissed a lawsuit seeking to nix the city’s push to make the open streets program a permanent fixture of city life.

However, the legal battle is far from over. Rather than dismissing the merits of the lawsuit, the court ruled that it was simply too early for the plaintiffs to claim any legitimate damages caused by sidewalk cafes.

While the outdoor sheds have been around for more than two years, the program is still only allowed thanks to a coronavirus-related emergency order. In other words, if Mayor Eric Adams were to not extend the order, the program — which served as a lifeline for many bars and restaurants during the height of the COVID-19 pandemic — would come to a grinding halt.

The lawsuit, brought by a group called the Coalition United for Equitable Urban Policy, centers on whether the Adams administration has the authority to declare that outdoor dining will have little environmental impact, as it previously tried to do.

Initially a district court ruled the city must first complete an environmental review before making what is known as a negative declaration. The appellate division reversed that order, saying that there are still several “legislative and administrative” steps for the city to take before it can even begin to make that determination.

“I can say that the current outdoor dining program as implemented under the emergency executive order served a very valuable purpose,” said Nick Fazio, chair of Community Board 8’s economic development committee. “At this juncture, I think everyone — business owners, patrons and community members — are ready to move to something that is permanent.”

And a bill — based on plans and guidelines developed by the city’s transportation department — has already been introduced in the city council to do just that.

“The preliminary guidelines, as it was described to me, would mitigate some of the negative externalities in the current program,” Fazio said, referencing the most common complaints regarding outdoor dining, like trash, snow removal, drainage and aesthetics.

“At the same time, it provides a pathway forward for businesses in the hospitality sector that want the program to continue.”

Richard Berroa, who owns Claudy’s Kitchen with his wife near the West 242nd Street stop of the 1 train, said his issue with open streets began when a nearby outdoor structure started being used for more than just dining.

“It just became a playground for anyone but the patrons,” he said. “We’re the last stop — or first stop — on the 1 train.

“So, the people that have been sleeping on the train all day get off, and they were doing their business in that space that was being unused.”

While he admits outdoor dining was essential for business owners during the pandemic, Berroa questions its long-term viability.

“We’re not Paris. There are few thoroughfares that are closed to traffic,” he said, adding that it’s a different story for businesses along quieter roads.

“It’s a mixed bag. I understand the intention of it to help businesses. I think it definitely did. But once they stopped being used, they became more of a nuisance.”

Yet, as Berroa would no doubt be pleased to hear, the current iteration of the city council bill would nix the dining “sheds” in favor of outdoor seating “with no roof,” most likely protected by bollards or some other form of crash barrier.

There would also be a fee involved in owning and operating these sidewalk cafes.

Marlyn Jimenez, a partner and general manager of The Bronx Public on West 231st Street, took advantage of outdoor dining at the start of the pandemic.

“It was definitely a plus for us when we couldn’t have anybody inside, and it helped us significantly,” she said. “Even last summer it helped tremendously. In the beginning, it was a bit of an issue due to parking. I know people who were a little upset about that. And that was something that we battled with originally.

“But we benefited on the business side of it.”

Bronx Public would definitely keep its outdoor dining, Jimenez said, but only as long as she can keep her enclosed structure. If the city council bill were to pass in its current form, she’s not so sure.

“The structure we have is one of the enclosed types,” she said. “I feel more protected, and for the customers there’s more protection.”

Still, Jimenez said she will wait until the legislation is passed, if indeed any does, before she makes any decision.

And the legislation is no fait accompli. The most powerful person at city council, speaker Adrienne Adams, said recently she doesn’t personally care for the street cafes. Certain restaurateurs themselves are against a clause that would only permit outdoor dining during warmer months, as Streetsblog reported.

And if the legislation does pass, it’s sure to face a legal battle soon after from those who just can’t stomach the idea of legalizing picnics.