All victim’s family wanted for Xmas was day in court 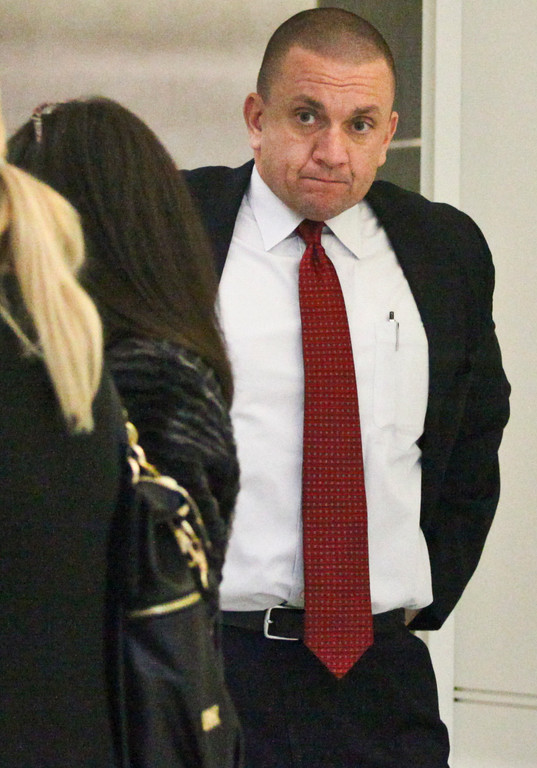 Detective Kevin Spellman walks past the family of Drane Nikac. Mr. Spellman is accused of killing Mr. Nikac in a 2009 car crash.
Byron Smith / The Riverdale Press
By Graham Kates

Former Detective Kevin Spellman’s vehicular homicide trial was supposed to be set by Christmas. Now it seems it could be months away.

At a Bronx Criminal Court hearing on Dec. 16, Mr. Spellman’s attorney, Robert Brunetti, asked to be removed from the case.

The departure of Mr. Spellman’s lead attorney is just the latest in an autumn filled with setbacks in the 25-month-old case, stemming from the 2009 death of Drane Nikac, 66, in Kingsbridge.

Mr. Spellman’s trial was delayed repeatedly over the last few months, as lawyers sparred over information compiled during discovery — which each side must share with the other — and Judge Steven Barrett criticized defense attorneys who seemed to be prioritizing other cases over Mr. Spellman’s.

On several occasions, including Dec. 16, Mr. Brunetti, of Brunetti, Ascione and Tomich — a Long Island law firm that specializes in drunk driving charges — sent representatives of his firm in his stead, much to the chagrin of the judge.

“I would have thought that this should be his first priority,” Mr. Barret said on Nov. 9. “This case is over 700 days old. Unless something big has happened in Suffolk I expect Mr. Brunetti to be here.”

A source at the Bronx District Attorney’s office confirmed that “the attorney for Mr. Spellman is definitely going to change,” but it is not clear how long it will take for a new lawyer to be ready for trial.

Rosemarie Arnold, an attorney representing the family of Ms. Nikac in a civil suit against the city, said on Dec. 16 that she thought Mr. Spellman was intentionally slowing down the court process.

“You know, we have the right to a speedy trial in this country, so that the innocent can speed this along, but this guy’s guilty as hell and it’s taking a long time to get this thing started,” Ms. Arnold said.