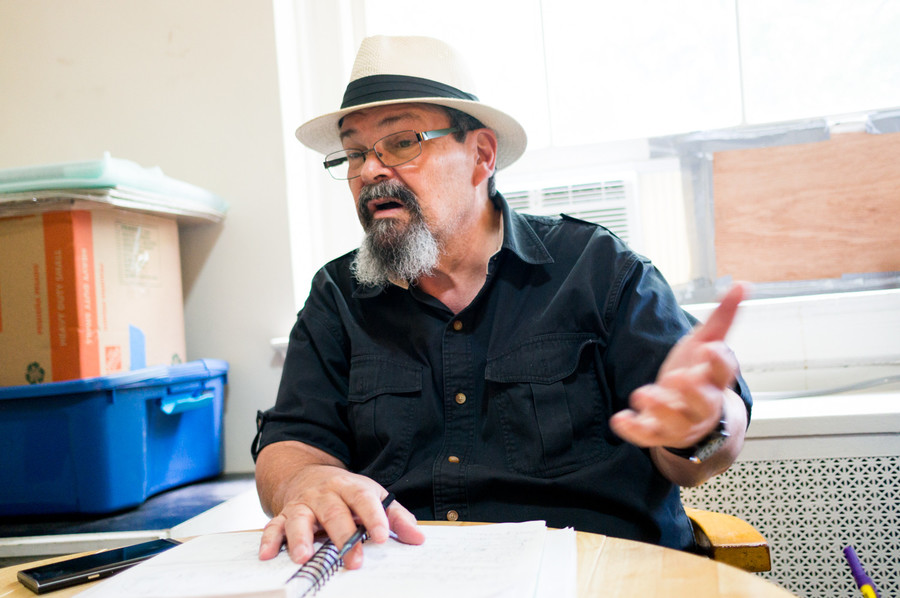 Bill Aguado, interim director of the photography group En Foco, talks about the importance of the diversity in the arts.
Julius Constantine Motal 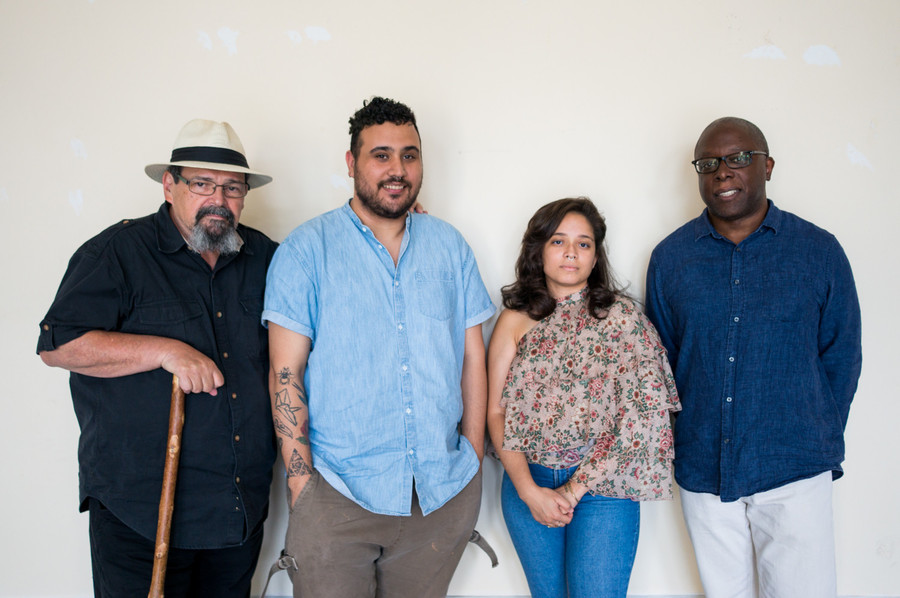 Bill Aguado, Oscar Rivera, Layza Garcia and Ron Kavanaugh stand in the Andrew Freedman Home where the Urban Arts Cooperative and En Foco are based. The four are just some of the faces backing an effort to help artists sustain financial stability and success.
Julius Constantine Motal
Previous Next
By Tiffany Moustakas

Five arts organizations have teamed up to form a coalition providing financial resources to empower emerging artists in the Bronx, Washington Heights and Harlem.

Called the Urban Arts Cooperative, the alliance was unveiled earlier this month as a way to help artists from various backgrounds learn the ins and outs of securing grant funding, marketing their work, and reaching a broader audience. The five groups involved in this effort are photography group En Foco, gallery BronxArtSpace, printmaking collective Dominican York Proyecto Grafica, the Literary Freedom Project, and the Puerto Rican Institute for the Development of the Arts.

Bill Aguado, the interim director of En Foco, said the effort between these five organizations is just “a microcosm of a larger community” of artists of color who don’t have enough resources to maintain a successful career. Aguado, the former executive director of the Bronx Council of the Arts, took on En Foco last year, a group that nurtures photographers of color through workshops, exhibits and fellowships.

One of the first things Aguado noticed after joining En Foco were the private donors who keep the group afloat. He realized quickly there was an opportunity to expand En Foco’s reach.

“What I wanted was to create a collective that would maximize its reach to artists of color regionally, locally,” Aguado said. “And a way to build an awareness as to organizations like ours that are vastly underfunded, vastly under recognized.”

“What we’re really trying to do is a find a more facile way of getting money directly to the community, to artists in these communities, that we serve,” he said. “So it’s not so much about trying to start a new arts council or trying to start or reinvent the wheel. These artists are just falling through the cracks. They’re not being funded, they’re not given an opportunity to really sustain their art and sustain themselves.”

The formation of the Urban Arts Cooperative comes just a month after Mayor Bill de Blasio said future funding for museums and arts organizations would change. Where monies were once distributed based on giving a majority of its funding to the 33 museums and organizations located in city-owned buildings, now funding depends on staff and board member diversity. An initiative to change the ethnic makeup of these workers will not enforce a real change, Aguado said, especially when it comes to who donors are giving their money to.

“We have to change the minds of funders that it doesn’t begin with the nonprofit arts organizations,” he said. “They’re in existence because of us” the artists.

Aguado also calls on artists to do their part to ensure they have a voice in where money goes by writing to elected officials, private donors, and the city’s cultural affairs department and telling them why they should fund initiatives geared towards elevating artists of color.

“We need them to be active as well,” he said. “We can be the catalyst, but without them being involved as messengers of the need for cultural equity, our efforts will fail.”

Although the Urban Arts Cooperative is in its early stages of existence, it’s planning on providing professional development for artists through town hall meetings to discuss broad issues and pointing them to various resources to apply for grants, market themselves, and advertise exhibits they might be featured in.

“It’s like these little things that a lot of people take for granted,” Kavanaugh said. “It takes time to develop all of these marketing avenues and build a platform.”

But before they can hit the ground running, the group plans to distribute a survey to learn more about what artists are out there and what they need from a group like the cooperative. A lot of that emphasis, Aguado said, will focus on a younger generation of artists.

“Ron and I have been through these wars a long time,” Aguado said. “But we also want to engage younger cultural activists.”

That’s where the cooperative’s younger members come in. Other En Foco members like Oscar Rivera and Layza Garcia are spreading the word through social media platforms like Instagram as a way to promote a virtual artistic space for young artists like them. What they have in mind includes online exhibits and allowing artists to take over the account for a day to showcase their work.

“It’s all about spreading the message and making sure we’re providing the services they need,” Rivera said. “The best tool that we have now is communicating online and getting our messages delivered.”

That the effort also is in its early development stages, Garcia said.

“It’s going to take a little bit of time, but it’s already out there,” she said.

Through this effort, the members of the Urban Arts Cooperative are learning patience and democracy as they work toward a common goal of supporting artists of color.

“We all want to get to some place at the same time,” Aguado said. “It’s a challenge.”

But at the end of the day, he believes vocalizing their beliefs will make all the difference.

“Advocacy,” Aguado said, “is a way for us to tell the world that we’re here.”