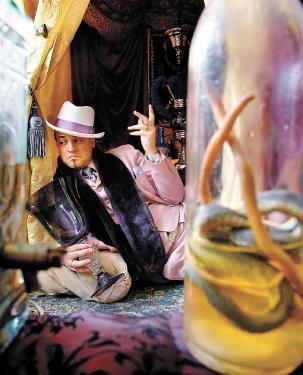 Baron Ambrosia relaxes under an elaborate tent in his Riverdale apartment. Photo by Joshua Bright

He is the self-proclaimed "quaffer of culinary consciousness."

He has traveled to some of the most dangerous areas in the world and has eaten things that would make contestants on Fear Factor squeamish. His favorite restaurants in the Bronx are places that many residents have never heard of.

His name is Baron Ambrosia and he is the alter ego of Riverdale resident Justin Fornal. His purpose? To bring attention to the wide diversity of restaurants and ethnic eateries throughout the Bronx.

For the past two months, Mr. Fornal has been writing, producing and acting in a new show, titled Bronx Flavor, which appears every other week on BRONXNET community television. Each episode runs about seven- to eight-minutes long and combines tongue-in- cheek food journalism with scripted comedy skits.

"My goal is to help people discover the true essence of Bronx cuisine, by putting a magnifying glass over the dozens of mom-and-pop restaurants that are serving various cultural groups living in the borough," Mr. Fornal stated. "I literally go out and cruise late at night to search for places that make dishes you cannot get just about anywhere else."

In previously filmed episodes, Mr. Fornal, as Baron Ambrosia, has consumed delicacies ranging from burek - a pastry filled with various meats, vegetables, cheeses or potatoes - at a restaurant owned by a family from Kosovo, to fufu, a popular dish in West and Central Africa, to cows' feet.

Even for those who are not nearly as daring as Baron Ambrosia, at least when it comes to mealtime, the show is worth watching purely for its entertainment value. In every episode, the character creates some kind of mischief, which often leads to his being kicked out of the restaurant or put in some other unpredictable and humorous situation. Most importantly, the show is familyfriendly and suitable for even the youngest viewers to watch.

"For me personally, the biggest accomplishment is to get some of my audience to go try these restaurants that they might not otherwise even consider, but it is also great to get some laughs along the way," Mr. Fornal explained. "Rarely will someone find a more fun way to spend five minutes than they will have watching this show."

While Baron Ambrosia was officially created about two years ago, the character has technically been around since Mr. Fornal was a young child. He readily admits that the character and the real-life person are so similar that they are almost one and the same. In fact, his fiancée will even occasionally respond to him with a lighthearted "okay Baron" and the term has become something of a nickname among his friends and colleagues.

"Baron Ambrosia is basically 90 percent of who I am," said Mr. Fornal, "His daily activities, his interests, his personality, all of it is patterned after myself. The only real difference is that I am more aware of other people's feelings, while the Baron is so over the top and passionate about what he does that he never knows when to back off."

With positive responses from the public and the show's popularity increasing with each episode, Mr. Fornal says that plans are underway to expand Bronx Flavor into a weekly segment. The idea for a possible one-hour national television program featuring Baron Ambrosia is also being floated around.

Yet, even with the show's success, Mr. Fornal is not quite at the point where people recognize him out on the streets of Riverdale. The 29-year-old actor does admit, however, to getting his share of attention from curious onlookers when appearing in one of the bright purple or pink suits and matching feathered hats that have become Baron Ambrosia's trademark.

"If people are pointing or laughing at me, I hardly ever even notice, because if you are not completely comfortable with yourself, in this world, you will be eaten alive. So I look at it like this, if Baron Ambrosia is so out of place everywhere he goes, then everybody else should feel that much more comfortable about going to these restaurants for a bite to eat," said Mr. Fornal. "This is what life is about: being preposterous, being outrageous, standing out and being different. I want every day to be a new adventure and I think there is plenty more excitement to be had right here in the Bronx."

All past episodes of Bronx Flavor are available on the Web, at www.bronxnet.org. The next new installment of the show will premiere this Friday, June 13, at 10 a.m. and 10 p.m., on BRONXNET - Cablevision channel 67 in the Bronx.