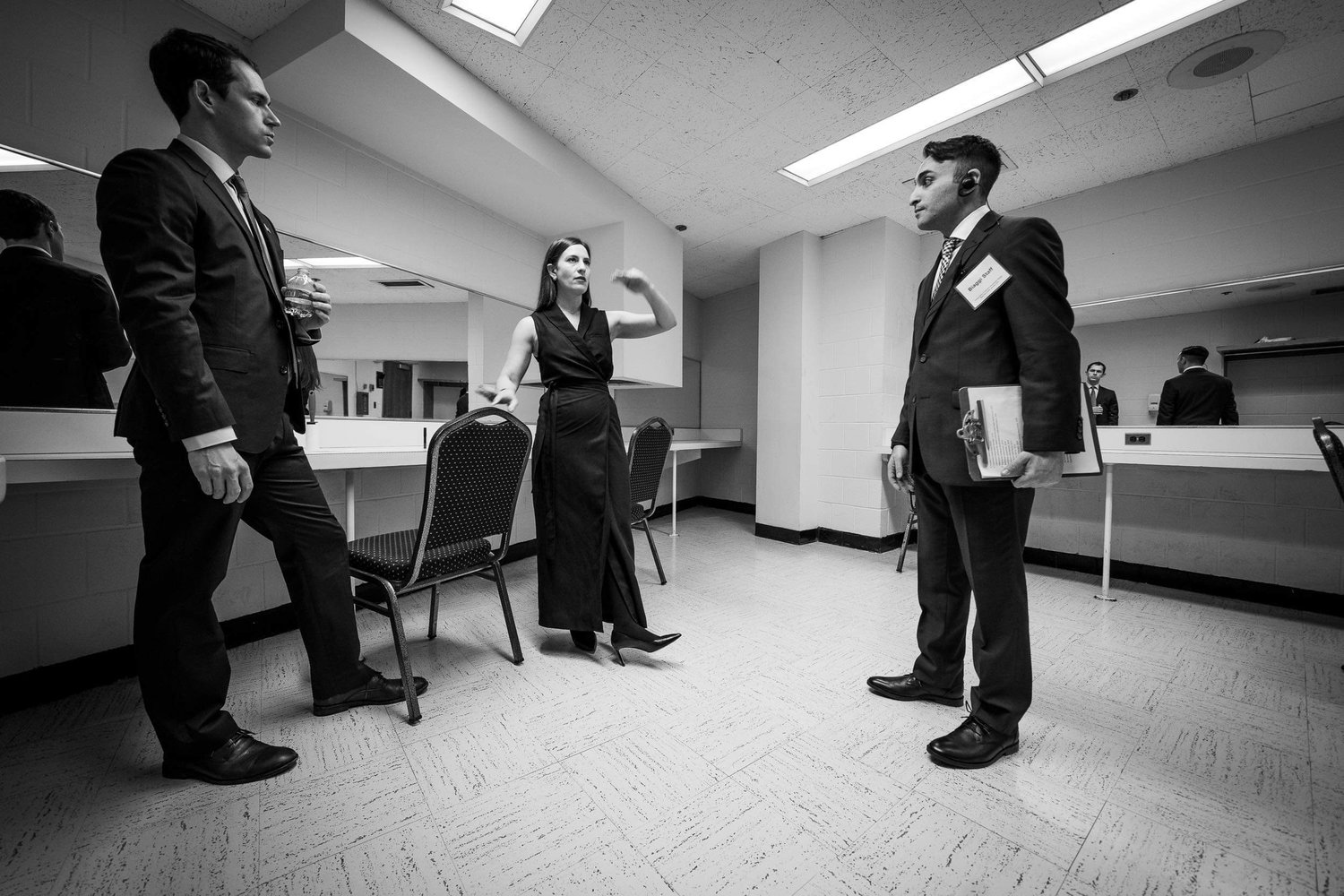 Christian Amato picked up the bulk of his early political experience working on the 2018 campaign of Alessandra Biaggi, who would later topple the quite-entrenched Jeffrey Klein the state senate. Amato has now launched his own political consulting firm, Consense Strategies.
Courtesy of Todd Cross 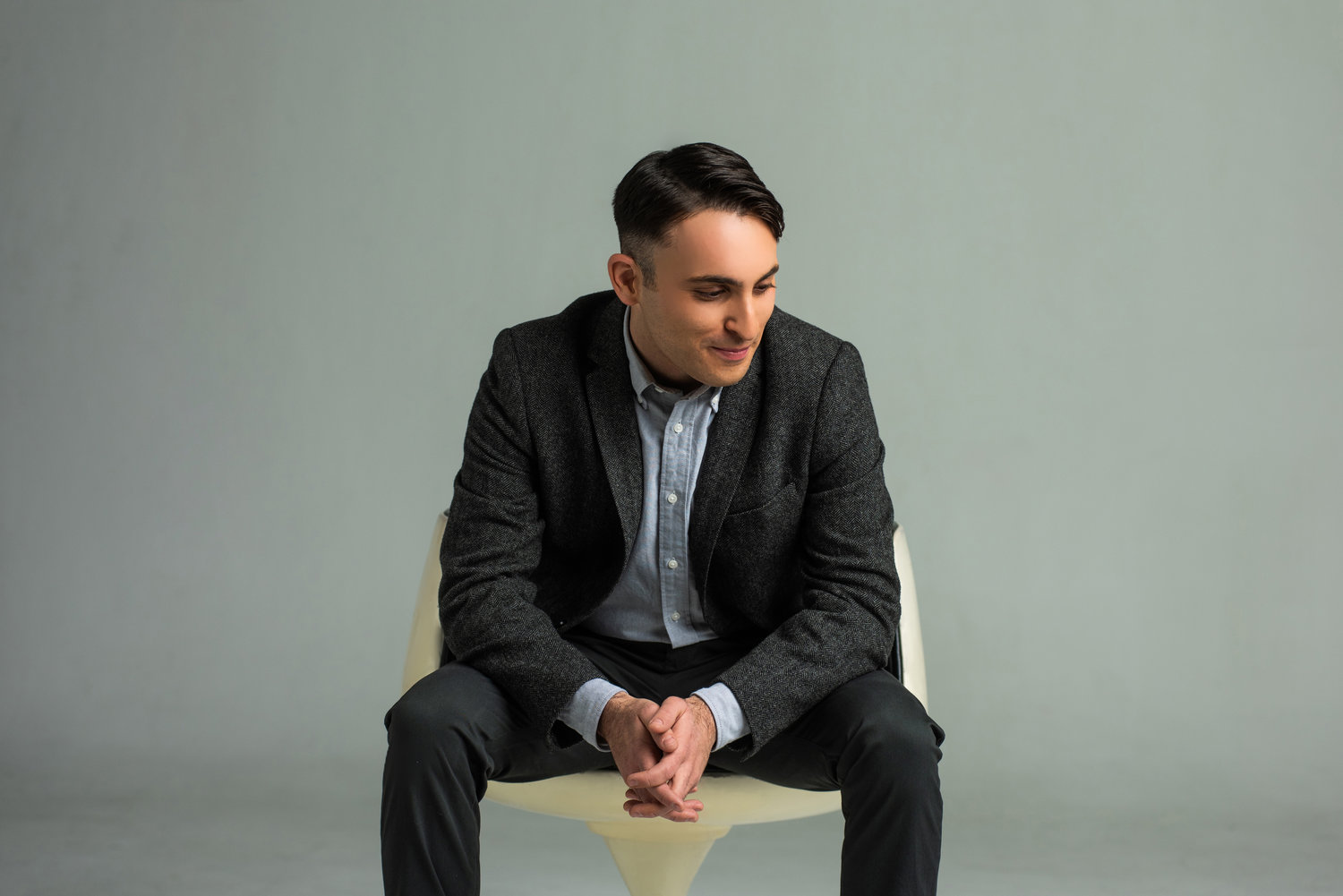 Christian Amato has traversed a long journey from someone who worked in Broadway-based theatre, to the theatrics of politics in New York City. He launches a new political consulting firm, Consense Strategies, to continue that work more formally.
Courtesy of Kelly Marsh 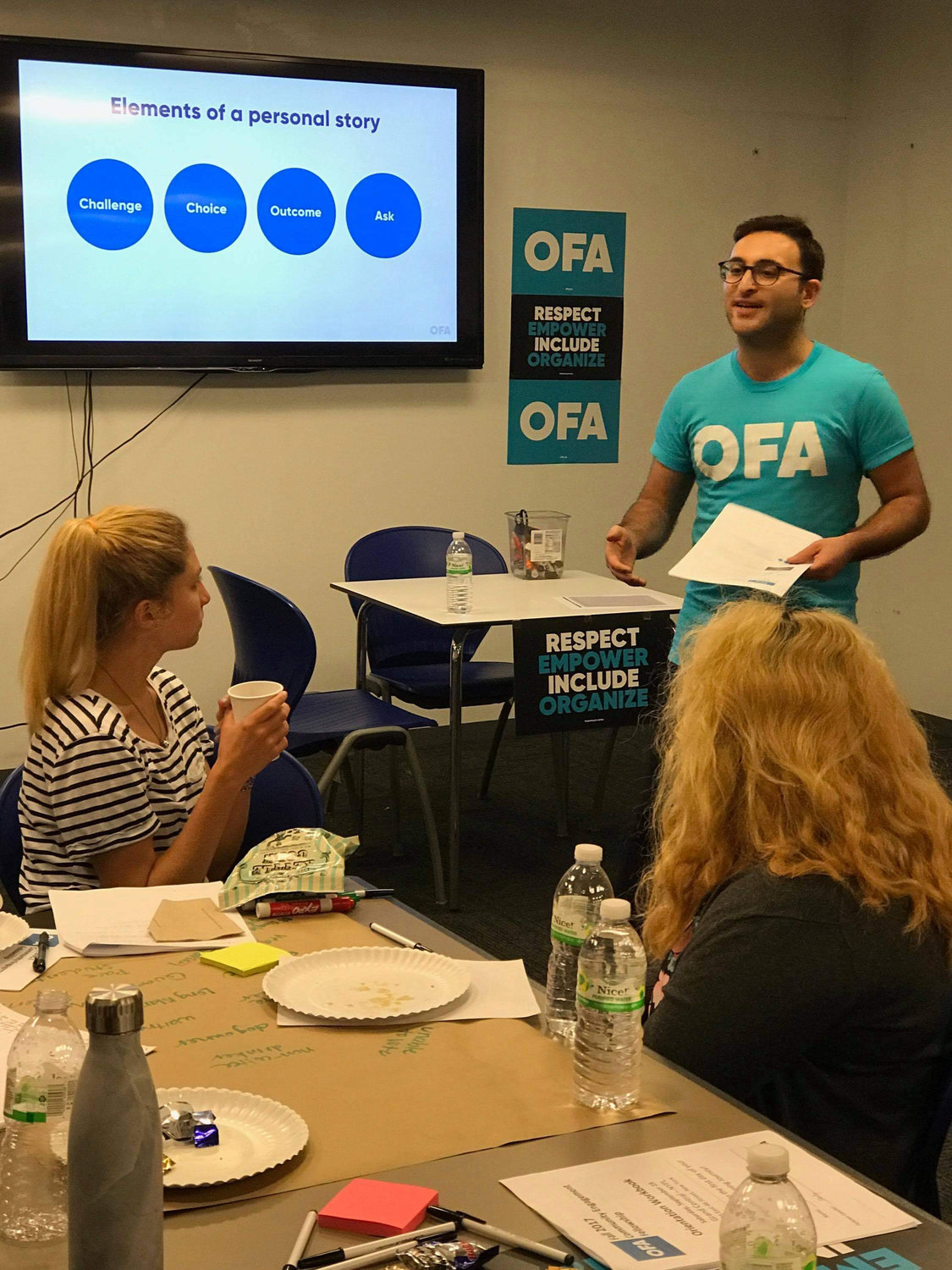 Christian Amato addresses the crowd at an event for Organizing for Action, a group that advocates for the agenda originally introduced by President Barack Obama during his time in the White House. Amato has struck out on his own, creating a new political consulting firm, Consense Strategies.
Courtesy of Organizing for Actio 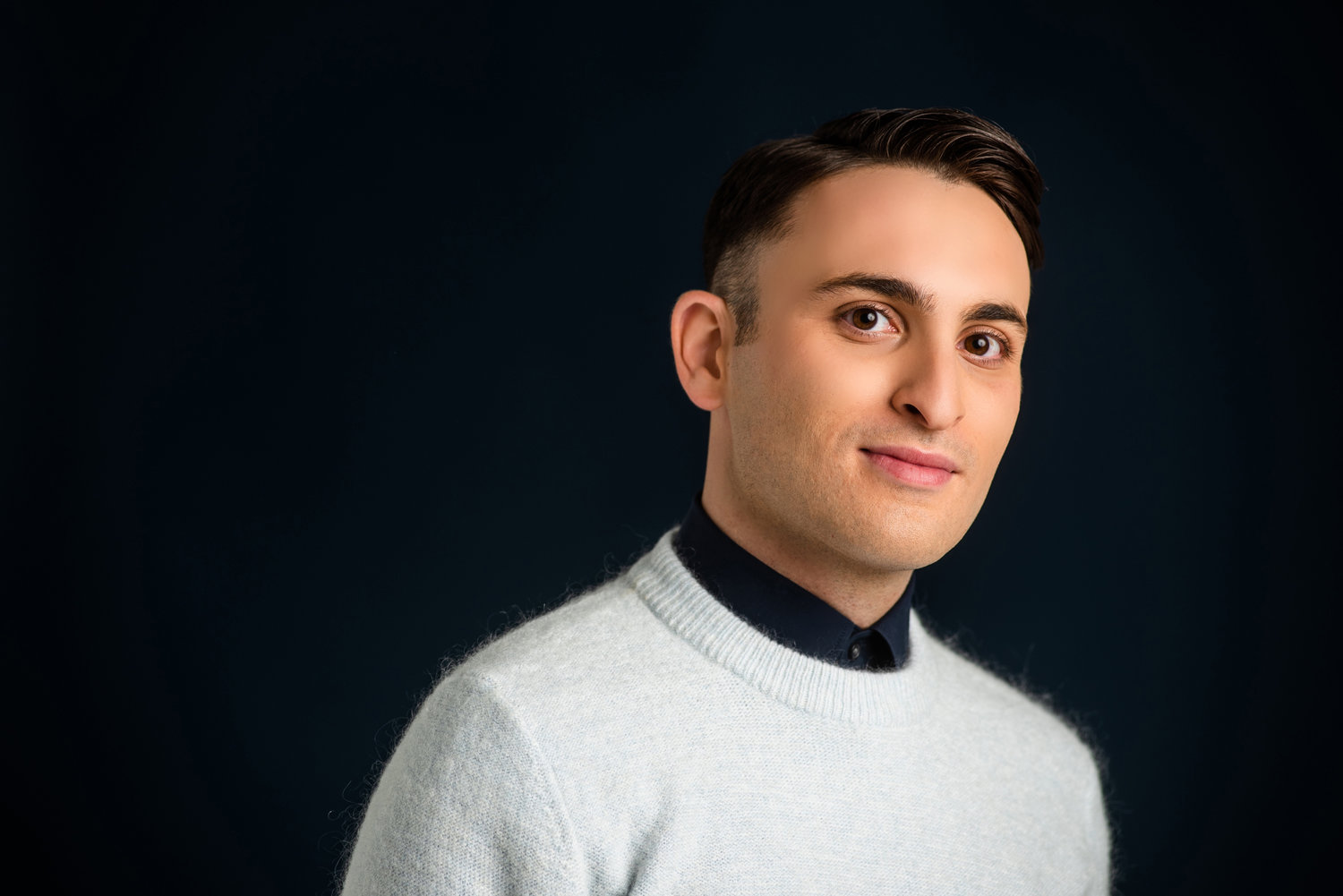 Christian Amato has traversed a long journey from someone who worked in Broadway-based theatre, to the theatrics of politics in New York City. He launches a new political consulting firm, Consense Strategies, to continue that work more formally.
Courtesy of Kelly Marsh
Previous Next
By ETHAN STARK-MILLER

As Donald Trump was on the verge of being elected President of the United States on the evening of Tuesday, Nov. 8, 2016, Christian Amato had a realization.

“I was watching what was happening with the presidential election, and I just said to myself, ‘Wow, Democrats suck at narrative,’” Amato said. “Democrats can’t tell a story. There’s no sense of stagecraft to anything that the Democrats are doing.”

Trump won the election because he had a clear narrative that resonated with voters, Amato realized. If anyone was going to have any shot of getting elected in the new Trump era, they were going to need serious help. Amato recognized his own storytelling background from working in advertising and theatre could help Democratic candidates improve their messaging. And, in turn, win more elections.

Four years and a new president later, Amato is continuing that political push from his Morris Park base. He’s formalized his efforts as Consense Strategies, a political consulting firm aimed to use his narrative techniques to put far-left progressive candidates in office. And he’s already working with two Bronx city council candidates: Elisa Crespo, an education liaison for the Bronx borough president, for a seat vacated by Congressman-elect Ritchie Torres; and Amanda Farías, assistant director at the Consortium for Worker Education, in the seat now held by Councilman Ruben Diaz Sr.

Amato wants to enter a consulting industry which already generates millions in revenue every campaign cycle just at the city level alone. While some groups like Raven Strategies and Sykes Global Communications — which most recently worked with city council candidates Jessica Haller and Dan Padernacht, respectively — have billed tens of thousands of dollars of work for its candidates since 2017, others like the one used by council candidate Eric Dinowitz — Brooklyn-based Red Horse Strategies — earned $3.1 million from city council races in 2017 alone, according to campaign filings.

Consense’s mission, Amato said, is to identify progressive leaders who already are organizing in the communities they want to represent, and give them the tools to compete against longtime incumbents. Neither Crespo nor Farías are facing incumbents — Diaz announced last fall that he was stepping down after this term — but Amato hopes his work on these campaigns will help showcase what his consulting firm can do.

“There are people out here who have lived our struggles and would fight for us if they were only given the access to power,” Amato said. “If they only had someone to help them build that power.”

While the inspiration to dive into politics came from Trump’s election to the White House, Amato took the turn toward a consulting firm after working for state Sen. Alessandra Biaggi.

Originally part of her campaign that upset Democratic stalwart Jeffrey Klein in the upper chamber, Amato transitioned to Biaggi’s deputy chief of staff in Albany.

That didn’t end as Amato hoped in what was a rather public professional divorce of the two last year. Biaggi fired Amato, but he says the senator wasn’t living up to the progressive ideals of her campaign and had quickly become out of touch with her constituents.

“Post working with Alessandra, I think my priorities became really laser focused on (the idea that) I don’t want to any longer help people who were using progressive ideals to elevate slightly left-of-center candidates,” Amato said. “I didn’t want progressivism to be a means for moderates to get into office.”

Amato says he was never given a reason for his termination, and Biaggi’s office at the time didn’t provide one to The Riverdale Press, citing it as an internal personnel matter.

Political consultants have become increasingly valuable in recent years, according to David Birdsell, dean of the Marxe School of Public and International Affairs at Baruch College. That’s become especially true as political parties quickly exit the roles of managing campaigns. With that ceded power, consultants have opened the door for insurgent candidates to run despite lacking support from their own party’s leadership, “most prominently exemplified by the nomination of Donald Trump to the candidacy in 2016 for the Republican Party,” Birdsell said.

“Very much over the loud objections of party leadership.”

Consultants can be really useful for navigating elections — especially in New York, where there are complicated processes for ballot access and candidacy certification.

In today’s high-technology age, many candidates are getting significant boosts by using software to help them analyze who their potential voters are and how to reach them. But gathering that data using software from groups like NGP VAN in Washington — campaign tools that are prohibitively expensive for many who might want to make a run for public office.

Amato says his firm has built a customized algorithm for analyzing voter data, and is developing additional software that would help his candidates reach voters by both phone and text message.

“Down the line, any organizer or any candidate doesn’t have to deal with these barriers to entry,” Amato said. “This stuff can be accessed by anybody. “

Those barriers to entry — the cost of hiring consultants and gathering voter data — have traditionally been significant. That means a candidate would have to have deep pockets or a large number of donors with deep pockets. Yet, if Amato does this right, Birdsell said, he could reach a more diverse group of candidates and run them for office.

Amato isn’t alone attracting such candidates, of course. New American Leaders, led by former city immigrant affairs commissioner Sayu Bhojwani, is one example, as is the political nonprofit Millennial Action Project founded by Steven Olikara. Both want to encourage younger and more diverse people to run for political office by lowering the financial barriers to campaigning.

“If somebody is able to reduce the cost of entry,” Birdsell said, “that would be a tremendous contribution.”

Consense limits itself only to leftist candidates whose ideologies align with his own, Amato said. That means he’ll never campaign for a Republican or even a moderate Democrat.

Crespo and Farías are exactly the kind of homegrown leftist candidates his firm wants to elevate, Amato added. Both support municipal jobs programs, for example, which he believes stems from their work in organized labor.

“You have two real people who have been doing this work and want to continue it as council members,” Amato said. “We have an opportunity through these council races to push New York to the left in a very meaningful way.”

CORRECTION: Political consulting group Red Horse Strategies is based in Downtown Brooklyn. A story in the Dec. 10 issue provided a different location.