AND THE BEAT PLAYS ON

Known for tasty refreshments and homey atmosphere, it’s not just tunes, but writing and live plays, too 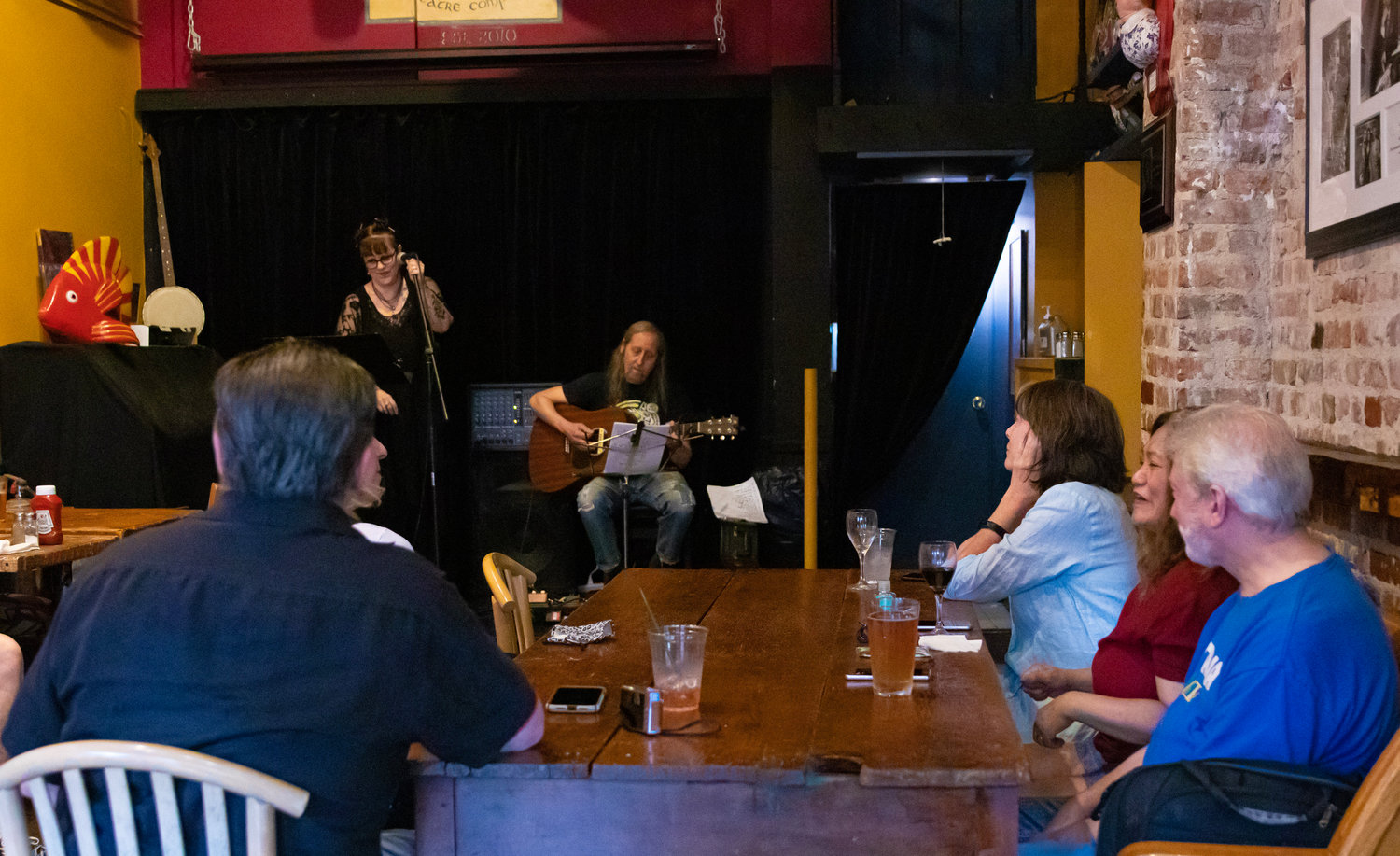 Suzanne and Seeing Voices took the An Beal Bocht stage on June 26 to play their role in the reintegration of live music into the West 238th Street pub’s routine. After the less-than-sing-song height of the coronavirus pandemic, An Beal is once again booking live music.
BRIAN ASARE 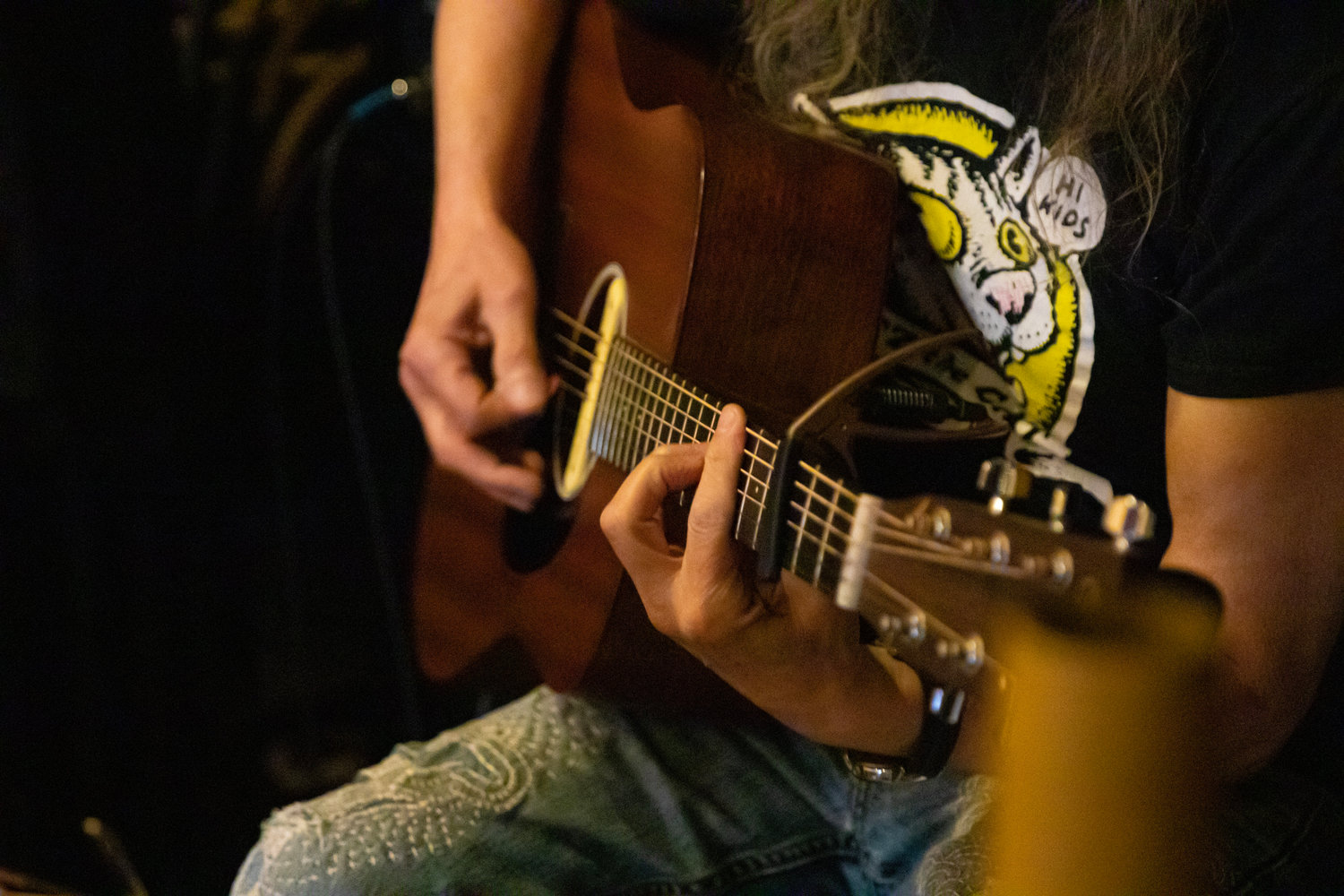 Richard and Suzanne Hockstein of Suzanne and Seeing Voices is just one duo playing live at An Beal Bocht in the post-pandemic buzz. John Pinamonti performs July 10, and Jeremy Bar-Ilan plays July 17.
BRIAN ASARE
Previous Next
By SOPHIA ROMANO

When sitting at the bar at An Beal Bocht Café, it’s easy to see why the pub is a neighborhood favorite.

“Dreams” by Fleetwood Mac plays from the kitchen. Plenty of natural light shines through the doors. The collection of bottles behind the bar and the vintage wooden signs on the surrounding walls provide a feeling of well-worn comfort.

The West 238th Street Irish bar and restaurant shares its name with a popular Irish novel. “An Béal Bocht,” meaning “the poor mouth,” and is regarded as one of the greatest pieces of Irish literature of the 20th century.

The book is regarded as remarkably funny with a hint of darkness to complement. And this description could easily be applied to the café itself, with its witty regulars and their brooding jokes.

“You’re an enabler,” An Beal regular Steve Kam scolded bartender Caitlin Seword, who smiled deviously while handing him another beer.

For as long as Seword can recall, Sundays from 4 to 7 p.m., always have been reserved for sessions of live “trad” music — short for “traditional” — a session whose performances feature instruments like fiddles and accordions.

“We’re trying to keep it as Irish as possible,” Seword said. Yet within this cultural parameter that the bar strives to maintain at least on “trad” night, An Beal makes an effort to mix up their choice of musicians.

“We actually love variety,” Seword said. “We’ve had some really odd choices here, and we like to take risks.”

Keeping their entertainment eclectic helps attract a crowd of similar diversity. It’s important to An Beal employees that the cafe doesn’t just appeal to a specific kind of person.

“It’s really good to be home to everybody,” Seword said. “We don’t want to have this stigma that it’s only for Irish people. We like being a neighborhood spot. So yeah, we try to keep an eclectic roster.”

One of An Beal’s most eclectic set-ups was its open-mic night. Seword believes open-mic attracts the pub’s most varied crowd because it consists of people who search the city — and even the tri-state area — looking for such events online. An Beal’s open mic can feature anything from spoken word to freestyling, from beatboxing to comedy.

The pandemic put a lot of things on hold, including An Beal’s ability to host events like open-mic. But live music is indeed making a comeback in the neighborhood hotspot. Tunes resume Saturdays from three to five p.m.

One of Seword’s favorite examples of how diverse the music really is at An Beal comes in the form of a band called Bombay Rickey. She describes their music as a blend of opera, Indian and dance.

While An Beal is known for its live music, it’s not the only performances found there. Theatre has had its own place since the pub first opened — something Seword believes many customers forget.

They think “‘like this place does music and we get hammered here,’” Seword said, “but then we have this serious theatre program that people are also really into.”

An Beal’s theatre program started with somber one-man plays, but evolved into a plethora of fun pantomime showings like “Every Brilliant Thing” by Duncan Macmillan and “Little Red Riding Hood”. It’s not just a creative outlet — the theatre program also has served as a way of connecting people.

Regulars can come to watch the plays and say, “Hey, I know that drunk!” Seword said.

An Beal puts together an annual event called “Putting on Your Shorts” — a series of short plays, of course. Before COVID-19, Seword planned to put on her own play she wrote with friends. The comedy featured an apocalypse bringing together three very unlikely people at the end of life as they know it.

As soon as they had a date booked, however, bars closed for more than a year.

But not even a pandemic could stop An Beal’s musicians, who turned to live performances online.

An Beal regular Maric Lenahan speaks fondly of another event hosted by his favorite pub called “Rough Draughts.” It’s a monthly flash-fiction contest that delivers both a prompt and a pad of paper whenever you buy a drink — alcoholic or not. From there, you have 30 minutes to write, before you’re required to stand up and read those stories to other patrons.

While “Rough Draughts” is in motion, so is the rest of the bar and its commotion, Lenahan explains. He says An Beal is not like a library, where everyone is quiet, during the competition. In fact, the bar distractions add to the fun and challenge of the event.

Winner gets a $25 gift card, Seword said, while runners-up get a can of beans and a can of peas.

“I think it’s just most important to get the word out that like we’re bringing music back,” Seword said. “We’re certainly returning to normalcy.”