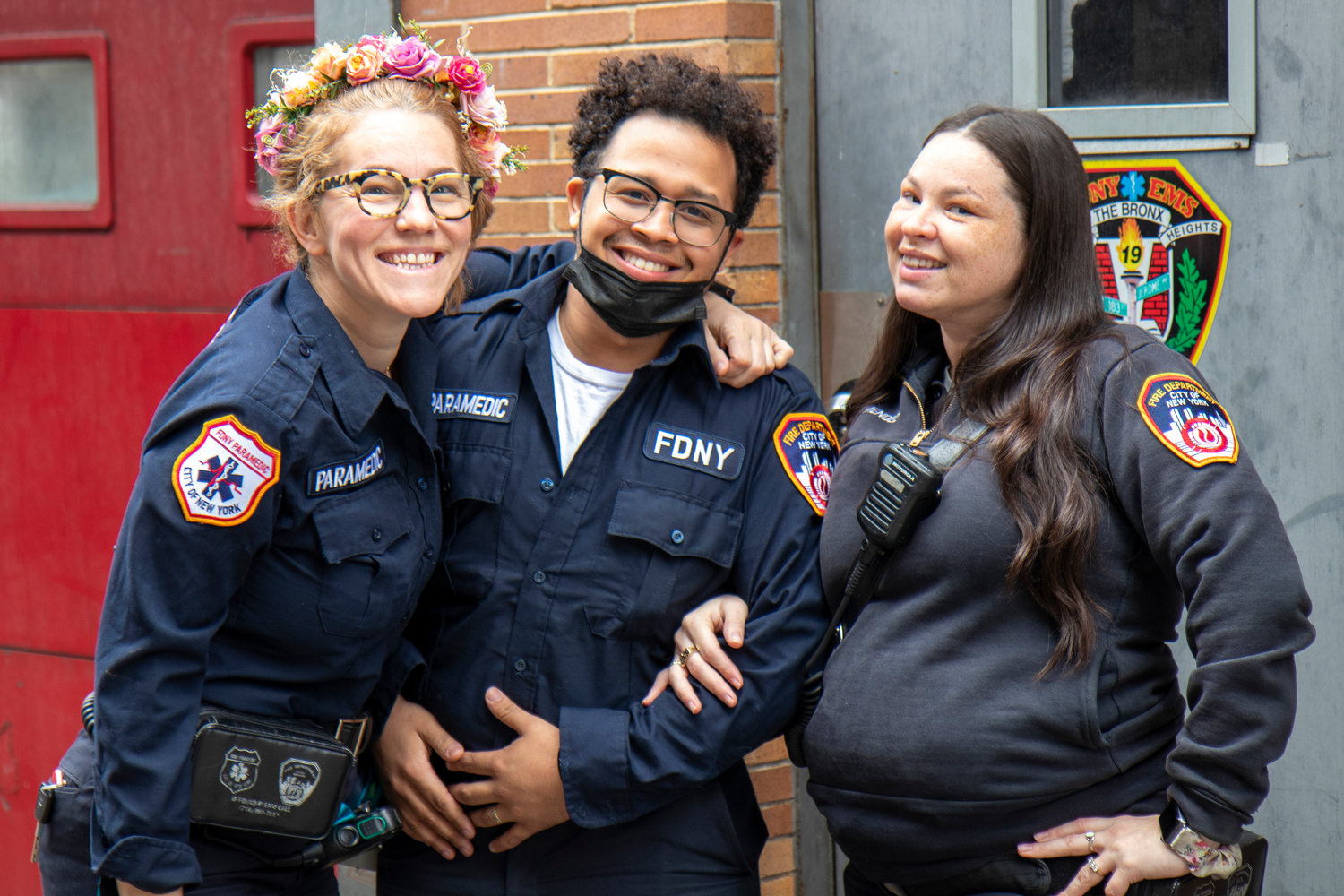 (From Left) Hasnie Ahmetaj, Dawill Hernandez and Jolissa Mendez pose for a portrait as they begin one of their shifts on 27-Victor, an ambulance that will no longer permanently serve the Riverdale area starting in October.
BRIAN ASARE 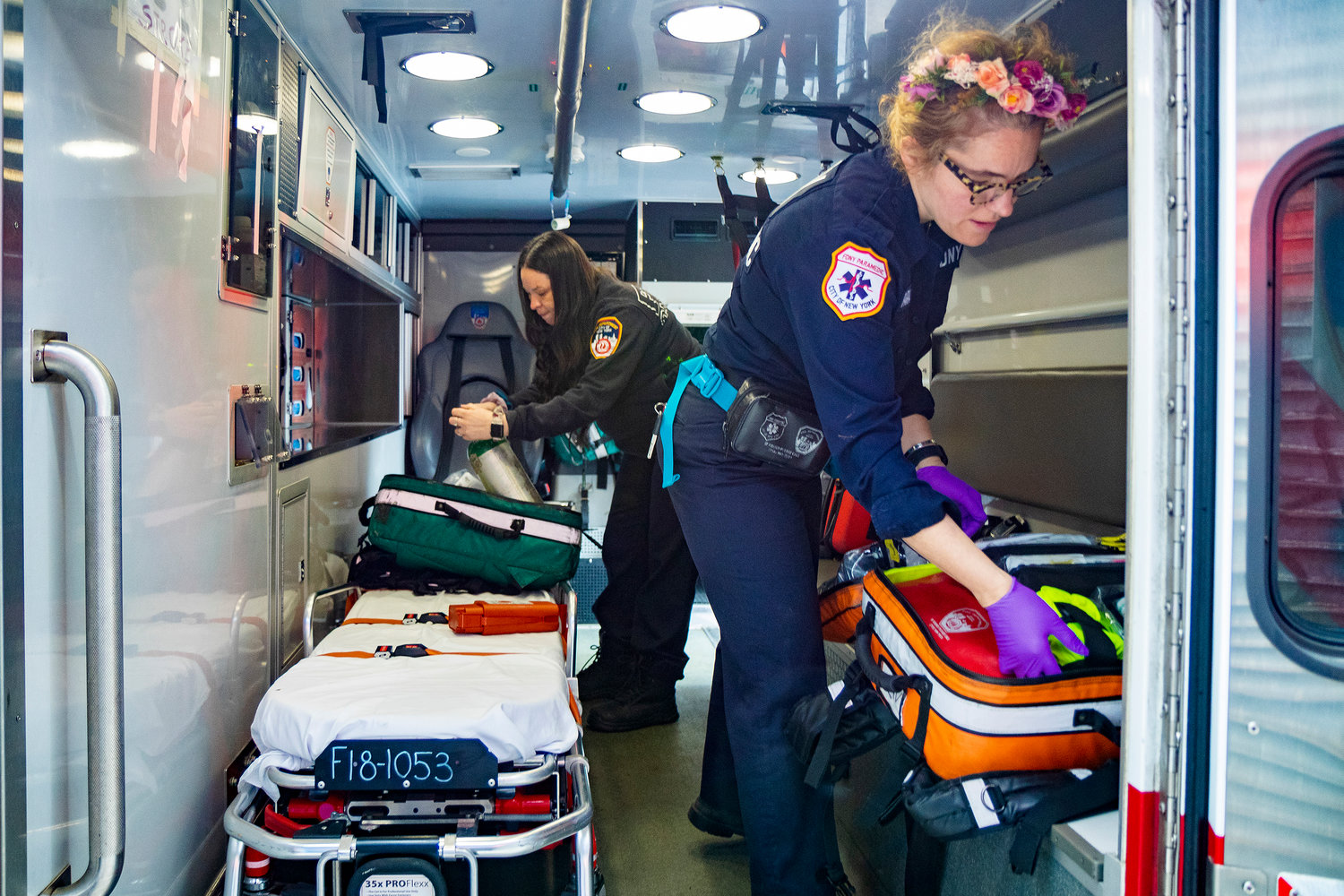 Jolissa Mendez, left, and Hasnie Ahmetaj say that starting in October, their EMS unit will no longer serve the greater Riverdale area.
BRIAN ASARE
Previous Next
By SACHI McCLENDON

Hasnie Ahmetaj has responded to emergency medical calls in this part of Bronx for the past three years. She’s shocked hearts back to life in Kingsbridge. She’s revived patients who couldn’t breathe in Spuyten Duyvil. She’s treated dozens and dozens of COVID-19 victims in the back of an ambulance as it sped along Riverdale Avenue.

In that time, Ahmetaj has grown attached to the community.

“I’ve been with this department for 15 years, and I’ve done many, many 911 calls,” she said. “I’ve worked in different boroughs, but I really love Riverdale.”

Ahmetaj is a paramedic for the city’s emergency medical services, assigned to 27-Victor — an in-house tag name for the ambulance that has been stationed on and around the intersection of Broadway and West 234th Street for more than a decade.

Yet in October, neither 27-Victor nor Ahmetaj will be posted on that corner. This part of the Bronx is losing an ambulance.

The New York City Fire Department, which operates the city’s emergency medical services, is set to re-engineer how certain ambulances respond to calls throughout the five boroughs.

As part of this citywide effort, FDNY is moving away from stationing ambulances at fixed locations, as they have done in the past. Instead, the department will favor having more “dynamic” units that can be deployed in Throgs Neck one day, Wakefield the next.  Wherever they are needed most.

The move comes as the department winds down emergency operations put in place at the start of the coronavirus pandemic when call volumes were through the roof.

Yet because of this shift, the Northwest Bronx is losing one of only three advanced life support ambulances operated by FDNY permanently stationed in the area. These paramedic-staffed ambulances often handle incidents where patients are expected to need a higher level of care.

EMS union members, including Ahmetaj, fear this change will slow response times in this corner of the Bronx, where there are more than 15 nursing homes and assisted-living facilities.

“I really love Riverdale because of the elders and the elder population,” she said. “Taking away 27-Victor, I feel will put them at higher risk — especially with all the nursing homes.”

Union representatives also say this overhaul is causing EMS personnel to do more with less, further stretching the resources of an already cash-strapped agency, and cutting out the needed redundancy in the system.

“You can get more productivity out of units, but what’s going to suffer is response times and coverage,” EMS officer’s union vice president Anthony Almojera said.

FDNY disagrees. It says the shift is a way the fire department is optimizing its resources, and that this part of the Bronx will be adequately covered.

“Vehicles will not be decommissioned, no resources are being removed from service,” spokesman Frank Dwyer said.

“Ambulances staffed by highly trained EMTs and paramedics are stationed in every community in the city.”

Unlike the fire department where trucks are dispatched from a firehouse, EMS units hang out on street corners while paramedics and EMTs wait for calls to come in. Right now, FDNY has three of these specialty ALS units stationed in this dispatch area — which covers Riverdale, North Riverdale and Fieldston, from the northwestern corner to Van Cortlandt Park to the east, all the way down to the Bronx Zoo and Bronx Community College.

The unit being eliminated, 27-Victor, is posted on Broadway and West 234th. Nearby, around the Jerome Park Reservoir, is 19-Willie. Then 27-Rescue sits on West 259th Street and Fieldston Road.  There is also a privately run unit that comes from Montefiore hospital.

Through this overhaul, FDNY wants to cut down on the amount of time an ambulance is unavailable to take a call while on the clock. It’s what’s known as “off-service” time.

According to FDNY data shared with The Riverdale Press, these units were unavailable to take a call on average just under 30 percent of the time between January 2021 and March this year.

There are several reasons a unit is accruing off-service time, according to FDNY, but one notable one sticks out: There just aren’t enough paramedics available to staff the ambulance. By eliminating 27-Victor — and moving around personnel to fill those shift vacancies — FDNY says it can reduce the overall off-service time in the area.

And FDNY is betting on spared ambulances to absorb those calls that 27-Victor might otherwise have responded to.

In a meeting this month with Community Board 8 members, FDNY officials presented data to back up the ambulance revamp. Between Jan. 1, 2021 and March 3, 2022, there were an average of fewer than two calls per hour for life-threatening emergencies, like cardiac arrests and chokings.

Right now, ambulances in this corner of the Bronx take on average of seven-and-a-half minutes to arrive on-scene to life-threatening calls, which is on par with citywide response times.

Besides, if there is a higher call demand, or if response times are shooting up, then the department can deploy temporary units, known as “tactical response groups,” to handle the surge. As part of the overhaul, FDNY has expanded the response group program in the Bronx by 59 percent of what it was prior to COVID-19.

If there are any holes in coverage, FDNY can plug them with these response group units, so the thinking goes.

‘This is a stupid chess game’

Nevertheless, the union still has concerns. Earlier this month, Michael Greco — a vice president of the FDNY EMS Union 2507 — joined CB8 members to sound the alarm on the coming changes.

“You are going to be short a 911-receiving ambulance that you’ve had the pleasure of for well over a decade, and that’s a result of this overhaul of the 911 system,” he said, “which has not gone through any sort of evaluation from city council or anything to that nature.

“So (FDNY), through a computer program, decided to optimize where ambulances go. And this program has spit out that certain communities do not need ambulances — that the units can be placed either somewhere else, or just deleted altogether. And your particular unit was deleted.”

Both union representatives, Almojera and Greco, take particular issue with what they see as FDNY’s fondness for data — letting algorithms and averages steer the department’s decisions — and applying supply and demand economics to a public service where lives are on the line.

“There’s no redundancy in the system,” Almojera said. “Perfect example: When we had the big fire in the Bronx in January, they had to pull units from Manhattan and Queens to backfill to the Bronx to handle the regular 911 calls.

This program is running it down to the bare minimum.”

Yet even as the unions fight back, the plan is scheduled to go into effect this autumn.

“This is a stupid chess game,” he said. “You know, ‘I’m going to try and get rid of this pawn, and maybe I can get away with it,’ which is what they are doing in Riverdale and other neighborhoods throughout the city.”