Another Passover under COVID, but hope abounds 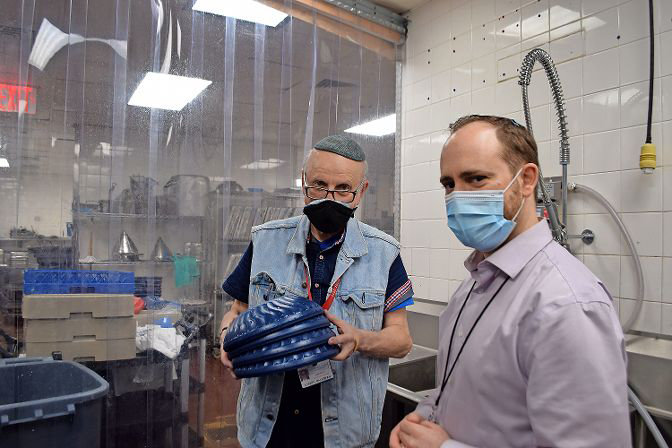 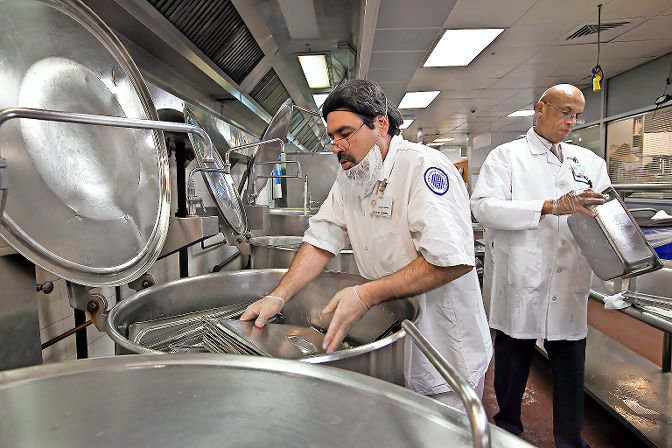 Harry Rivera places lids into a bath of steaming hot water as production manager Jerry Scott carefully inspects trays during kashering for Passover at the Hebrew Home at Riverdale in 2012. With some form of Seder returning this year in the wake of the coronavirus, preparing utensils for the holiday like this also returns to many homes and kosher eateries.
MARISOL DIAZ / File 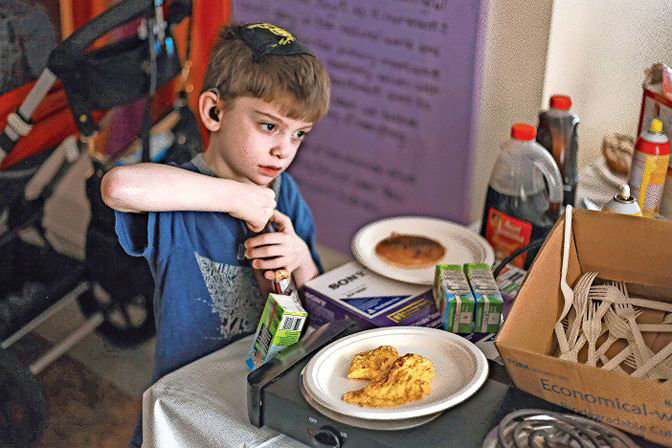 A young boy opens a bottle of chocolate syrup at a pre-Passover party at the Hebrew Institute of Riverdale back in 2018. Seders are returning for Passover this year, in the wake of the coronavirus pandemic.
SEAN JEFFCOAT / File
Previous Next
By MICHAEL HINMAN

About this time last year, there were a few moments when Rabbi Barry Dov Katz almost started to worry.

The coronavirus was out of control in New York City, spreading rapidly with few treatments available. Many were scared, as just about everything making up normal living in the community completely shut down.

But not even a deadly virus can cancel Passover, the Jewish observance of God’s final plague against the Egyptians where the first-born in any home not marked with lamb’s blood on its doorway would die, forcing the pharaoh to finally release the Israelites from bondage.

“There’s a story that we read at night during Passover,” Katz said. “Now we are enslaved, next year we will be free. That’s where a lot of people are. Like, ‘Here we are now, but we’re looking forward to that other place.’ Just know it’s going to take us a little longer to get there.”

That Haggadah line filled the rabbi’s mind last year when Conservative Synagogue Adath Israel of Riverdale was trying to find some way to ensure every observant Jew could experience their Seder, the ritual feast that begins the Passover season.

“People were scared last year. We arranged for people to essentially get free meals for Passover because we didn’t want people to go out and shop for the special foods that they needed. This way, they could stay home and have it all delivered to them.”

Once Katz saw the congregation come together — not physically, but spiritually and in community — any worry that might have crept to the surface quickly dissipated.

“We had this amazing community effort where people donated money, and we were able to deliver,” the rabbi said. “It was really quite remarkable. It was really taking care of people in the most intimate way. But this year — this year feels different.”

And it all centers around a single emotion: hope.

That’s the feeling shared by many at the Van Cortlandt Jewish Center on Sedgwick Avenue. Outside of putting together a minyan — the quorum required for public prayer — on Shabbat, the center spent much of the pandemic conducting just about everything through online videoconferencing apps like Zoom. Maintaining that level of fellowship many look forward to when attending services in-person can be difficult through a virtual environment.

“We’ve just noticed in this past forum that it wasn’t well attended as it has been,” said Stuart Harris, a treasurer on the Jewish center’s board. “These days, people are just wanting to see familiar faces. It’s not easy not seeing someone for a year now.”

Many of the congregants at the Van Cortlandt Jewish Center are older, Harris said, so any kind of in-person service requires detailed planning. Yet, the doors to the synagogue will open this weekend to start Passover. There will be social distancing. There will be cordoned-off areas. There will be temperature checks for everyone walking in.

“We know in advance who’s coming, except for some little surprises we may get,” Harris said. “But with everybody separated, we can control where they sit, and not spread this virus around. We’re dealing with it, but we’re also not going to turn anybody away.”

At facilities like the Hebrew Home at Riverdale, no one can be turned away because most all of them are already there. Last year’s Passover was observed with no community gatherings, and Seder food came from frozen kosher stock because the pandemic prevented religious leaders at the Palisade Avenue campus to kasher the kitchen — clean it for Passover.

“Normally, we would have a Seder plate at each table in the large community Seder we would all have together,” said Noah Aronin, the Hebrew Home’s religious affairs director. “This is where our residents would be able to invite their family members and their friends. But last year was the first time we weren’t able to do that.”

Those big family Seder plates were replaced with individual plates delivered to residents where they were hunkered down for the long haul of the pandemic.

“No one was able to have anything in-person,” Aronin said. “For those who I was able to deliver to personally, I tried to do like a three-minute or a five-minute Seder, where I would say some blessings for them. But there just wasn’t much I could do.”

But there won’t be frozen food at the Hebrew Home this year. Kashering is well under way for the facility’s kitchen. The gefilte fish, the matzo ball soup and even the tsimmes will all be fresh. And at Hebrew Home’s RiverWalk Senior Apartments facility, where living situations are more independent than the traditional nursing home, some of the Seders will allow for small gatherings.

“Although it’s still not up to the level where they could, in past years, invite guests, we’re still going to have these Seders in-person in our beautiful dining room,” the rabbi said. “We’re super-excited about it.”

It’s the kind of progress that can’t help but produce hope — something that’s far more in abundance than it was a year ago.

“I’m always optimistic,” CSAIR’s Rabbi Katz said. “To be a Jew is to be hopeful and optimistic. Of course, last year I said it would be over by now, and it’s not. I might have to recalibrate my optimism and my hope a bit, but I am always optimistic. And I always have hope.”

CORRECTION: Rabbi Noah Aronin is the religious affairs director at the Hebrew Home at Riverdale. A story in the March 25 edition provided a different title.