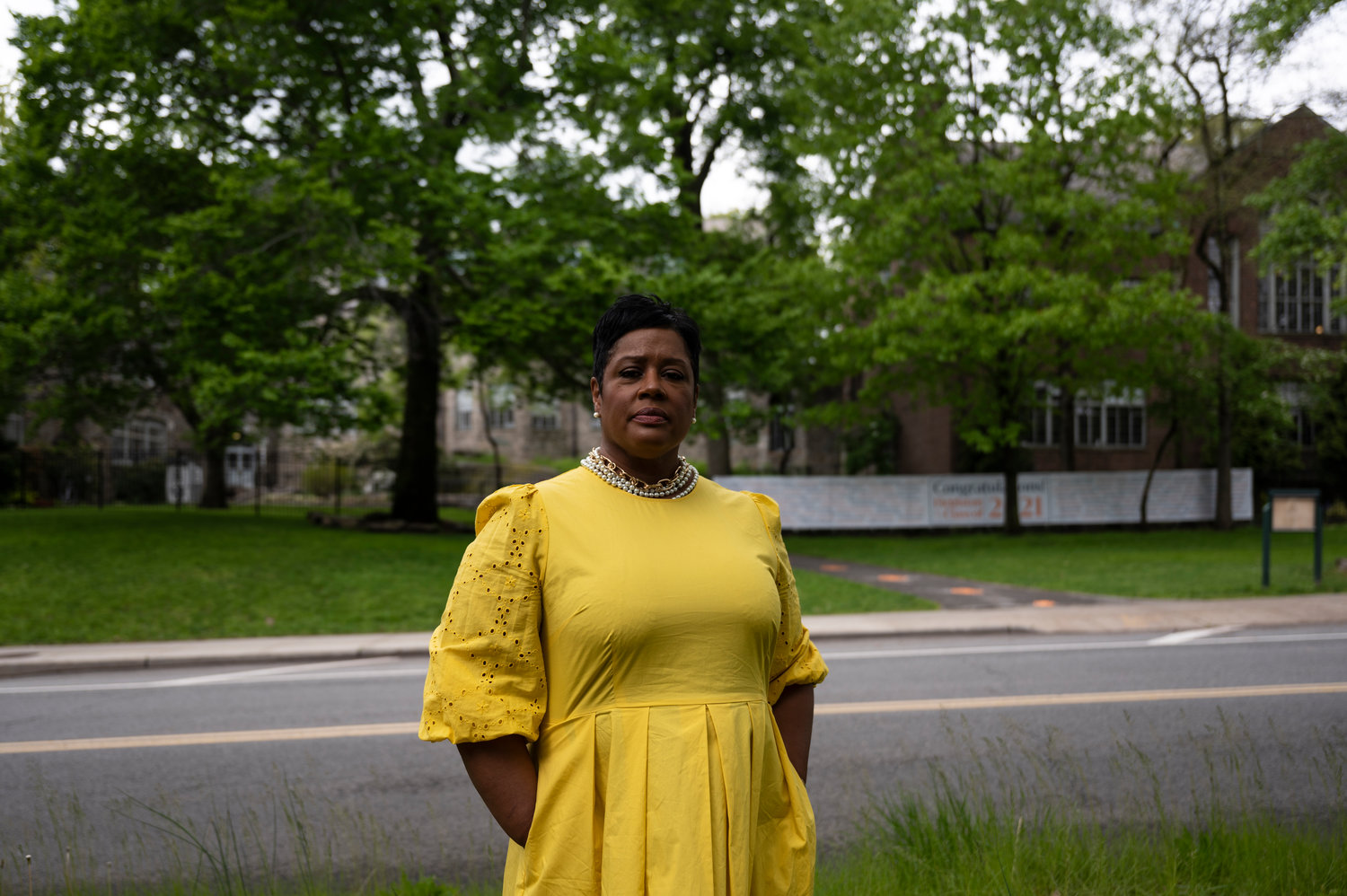 Kim Emile is one of the plaintiffs in a recent lawsuit accusing Ethical Culture Fieldston School of racial discrimination. She’s an alumna of the school, and her son and daughter attended the school as well.
HIRAM ALEJANDRO DURÃN 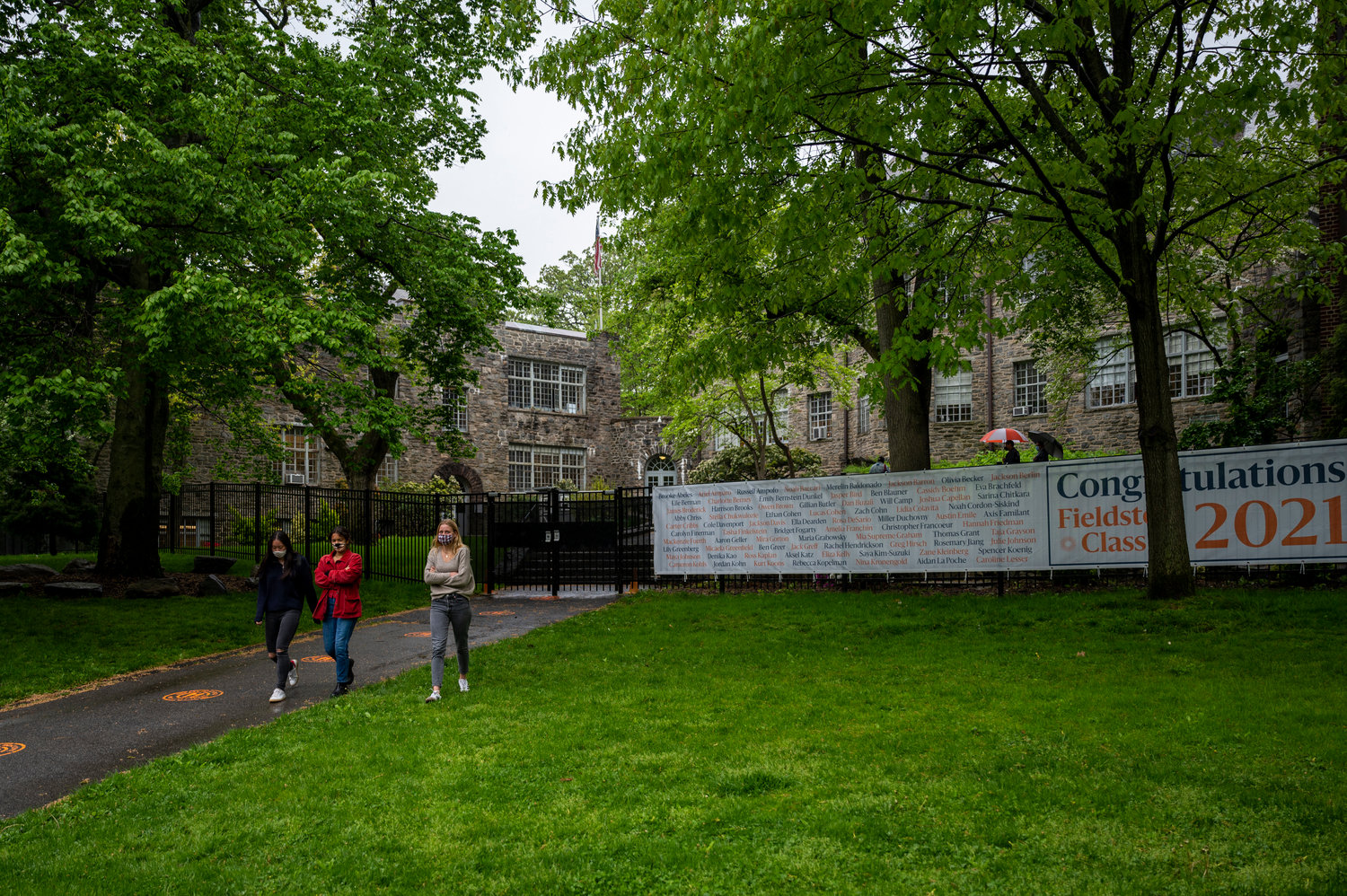 Ethical Culture Fieldston School has been sued by a family claiming the school failed to act on reports of students alleging racial discrimination at the school. Administrators say they are committed to diversity on campus.
HIRAM ALEJANDRO DURÃN 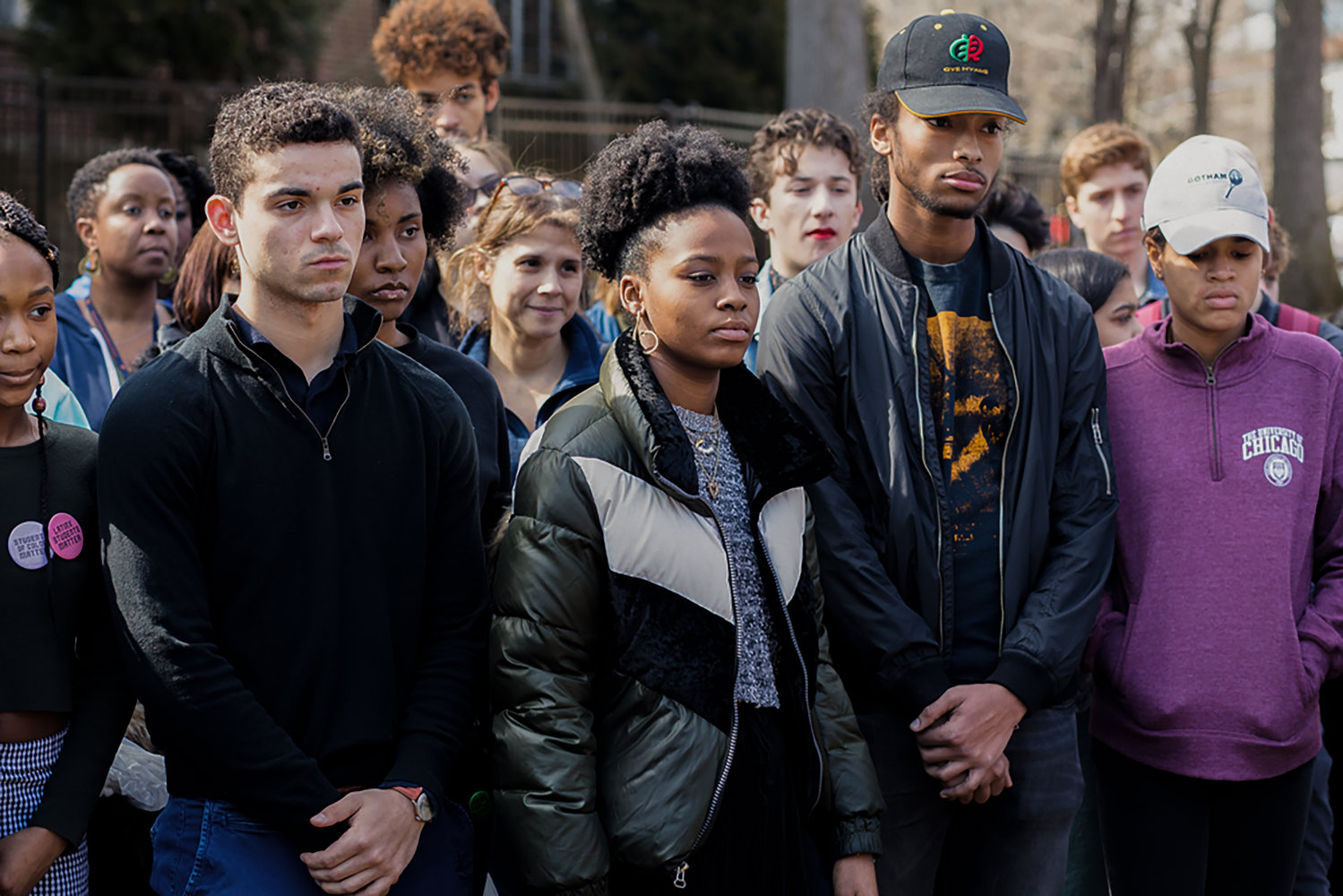 Ethical Culture Fieldston School was the site of a four-day occupation in 2019 by a group called Students of Color Matter. However, some believe little has changed since that protest, as one Black family is suing the school over racial discrimination claims.
JULIUS CONSTANTINE MOTAL/ File 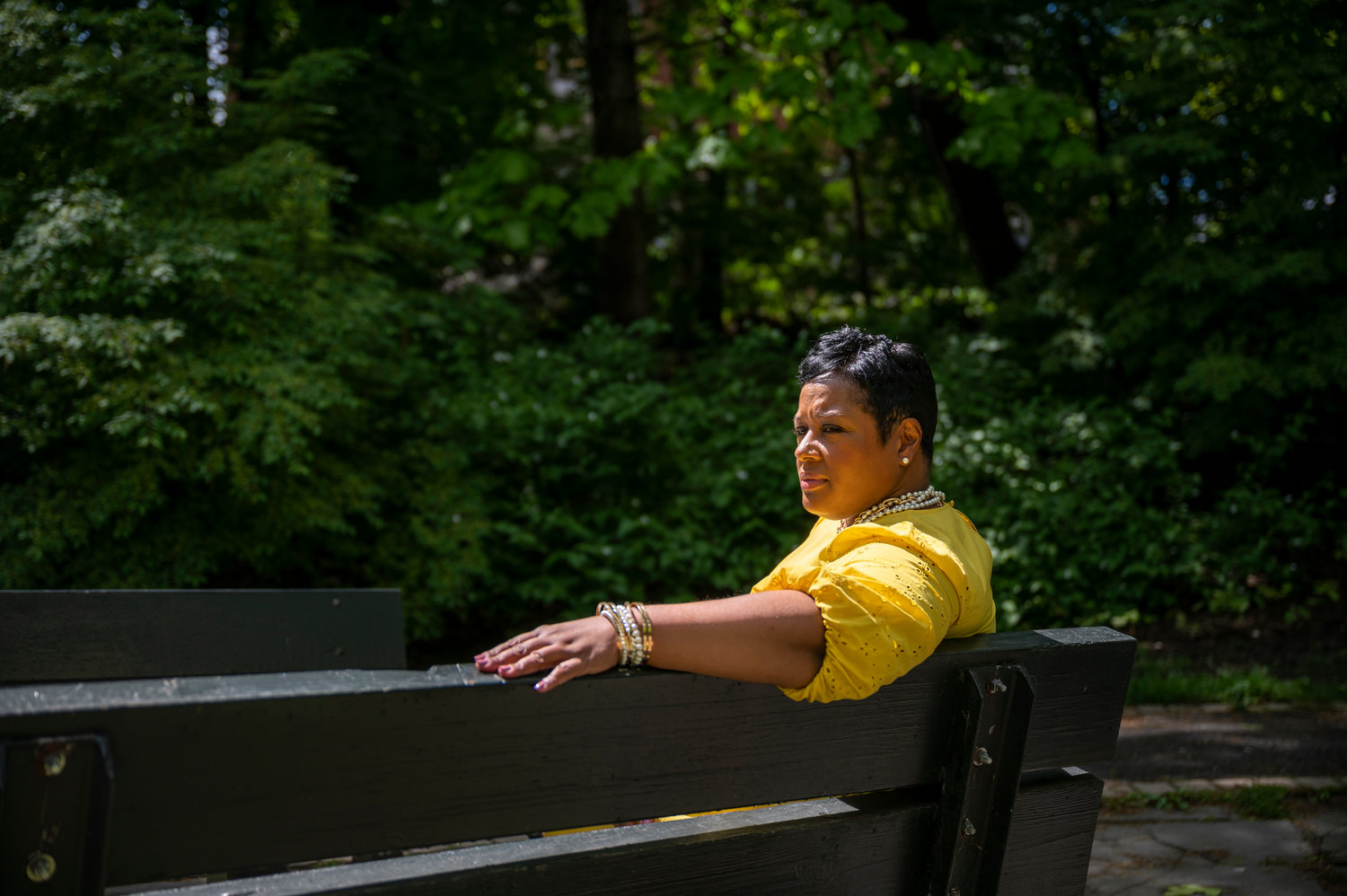 Kim Emile is one of three plaintiffs suing the Ethical Culture Fieldston School for what she says is racial discrimination that targeted her two children.
HIRAM ALEJANDRO DURÁN
Previous Next

As a woman of color and as an alumna of color, it cuts right to my heart that the girls of color — and my daughter, a young woman of color — (were) subjected to this kind of disgusting behavior.”
Kim Emile
By ROSE BRENNAN

When Kim Emile graduated from Ethical Culture Fieldston School, she never imagined one day suing her alma mater. But after what she claims happened to her children while attending the prestigious private school, Emile says she had no choice.

Emile filed suit in federal court against several administrators and faculty members at Fieldston, including head of school Jessica Bagby, Upper School principal Nigel Furlonge and Upper School dean Carl Anhalt, among others not yet identified.

Filed late last month, the lawsuit alleges a pattern of not only ignoring complaints from Emile’s children over what she described as racist incidents, but also retaliation from the school when the teenagers came forward. The lawsuit says Emile’s family suffered “substantial economic and non-economic damages, reputational harm, and severe mental anguish and emotional distress.”

One of the more recent incidents prompting the lawsuit involved Emile’s son and a conversation she said two of his white classmates shared on the social media app Snapchat. Currently a senior at Fieldston, Emile’s son is only identified as “A.C.E.,” leading his lawyers to give him the pseudonym “Ace.”

According to the lawsuit, someone sent Ace a screenshot of the conversation between the students where he is called “a (expletive) n——r.” Ace reported what happened to school officials a few months later, according to his lawsuit, but the disciplinary action against the two students was insufficient, claiming neither have faced any consequences despite admitting to using the racial slur against Ace on two separate occasions.

Other claims as well

The lawsuit recalls another incident dating back to middle school when a white student called Ace a “slave” during recess. The student allegedly said, “Bow down to me, you are my slave,” and whipped Ace with his jacket.

Ace reported that to middle school assistant principal Jason Ford, who had the white student apologize. However, that apology was “subpar,” according to the lawsuit, with claims the student told Ace, “I’m sorry it happened — if it ever happened.”

Ace’s sister Arielle Emile, who graduated from Fieldston in 2020, claims in the lawsuit she was targeted in several racist incidents as well. Students allegedly made fun of her “Afro-centric” hairstyles, while others used the “n-word” as well — with one of those incidents dating back to kindergarten.

During her junior year, Arielle says in the lawsuit she learned of a smartphone group chat managed by students challenging male Fieldston classmates to deny themselves sexually for an entire month. In order to do this, the boys were allegedly instructed to look at photographs of Fieldston female students of color in an attempt to “turn off” the teens participating in the challenge.

Arielle reported this to a teacher, yet nothing was done in response, according to the suit.

“As a woman of color and as an alumna of color, it cuts right to my heart that the girls of color — and my daughter, a young woman of color — (were) subjected to this kind of disgusting behavior, and that ECFS allowed this to happen,” Kim Emile told The Riverdale Press in an interview. “I expect more of them as an institution that has ‘ethical’ in their name.”

Emile and her family are not the first to sue the Fieldston school over alleged racial discrimination. Malakai Hart and his family sued the school in 2019 not long after some students protested the “racist culture” they say existed on campus, by taking over one of the school’s buildings. That protest happened after a video went public reportedly showing five Fieldston students “using racist, homophobic and misogynistic language in a hateful and targeted way,” according to the protesters, who at the time called themselves “Students of Color Matter.”

The Hart case was settled out of court last year, and Fieldston administrators denied all the claims.

A biracial student identified only as “M.H.B” took Fieldston to state court in 2018 for failing to take action against alleged racial discrimination targeting the student. Lawyers amended the lawsuit soon after, claiming Bagby distributed an email to Fieldston school families using language that attempted to “tarnish” the family’s reputation by alleging the lawsuit was for monetary gain.

“While the family has now filed a lawsuit, you should be assured that our school’s child safety policies will not be compromised,” Bagby’s email read, according to the amended complaint. “We are saddened that anyone in our community would try to undermine this system with a baseless lawsuit that puts profiteering ahead of students’ safety.”

The Cochran Firm, which has represented plaintiffs in all three lawsuits, told The Press that after Fieldston tried twice unsuccessfully to dismiss the claim, it was “resolved” — although Cochran Firm attorneys were not specific on how it was resolved.

Kim Emile says she kept her children in the school after all that primarily because Fieldston’s administration committed to addressing the 2019’s protest call for change — a protest she said both Ace and Arielle participated in.

“I expected things to get better,” Emile said. “The school said things would get better. They said they were working with Students of Color Matter to make things better. So I believed them, and I believed those promises. But unfortunately, they weren’t true.”

Ace and Arielle’s alleged racist experiences are by no means unique, their Cochran Firm attorney Derek Sells said, who also represented Hart in his suit against Fieldston. He says some have gone as far as creating their own Instagram group known as “Black at Fieldston” with various claims of racial incidents at the school.

A Fieldston spokesperson told The Press the school is aware of the lawsuit, and was investigating “newly disclosed incidents” when the Emiles filed their lawsuit. They added the school takes the claims seriously.

“Ethical Culture Fieldston School is working hard to create an environment where every student can thrive,” the spokesperson said, in a statement. “We remain committed to our values and goals of diversity, equity and inclusion, and the ongoing transformational work we have been engaged in as a community.”

Attempts to reach the other administrators mentioned in the suit were redirected back to the same spokesperson.

But such a statement is little more than empty words to Kim Emile, who wishes her children didn’t have to endure what she claims was racial discrimination at Fieldston. But she does see the lawsuit as an opportunity for her children to seek justice in a way they were unable to at the school.

Sells believes this suit is an opportunity to advocate for the racial justice Kim Emile calls for.

“We believe in civil rights,” he said. “We believe in trying to level the playing field so that Dr. Martin Luther King’s words of being able to judge somebody, not on the basis of their skin, but on the content of their character, become a reality.”