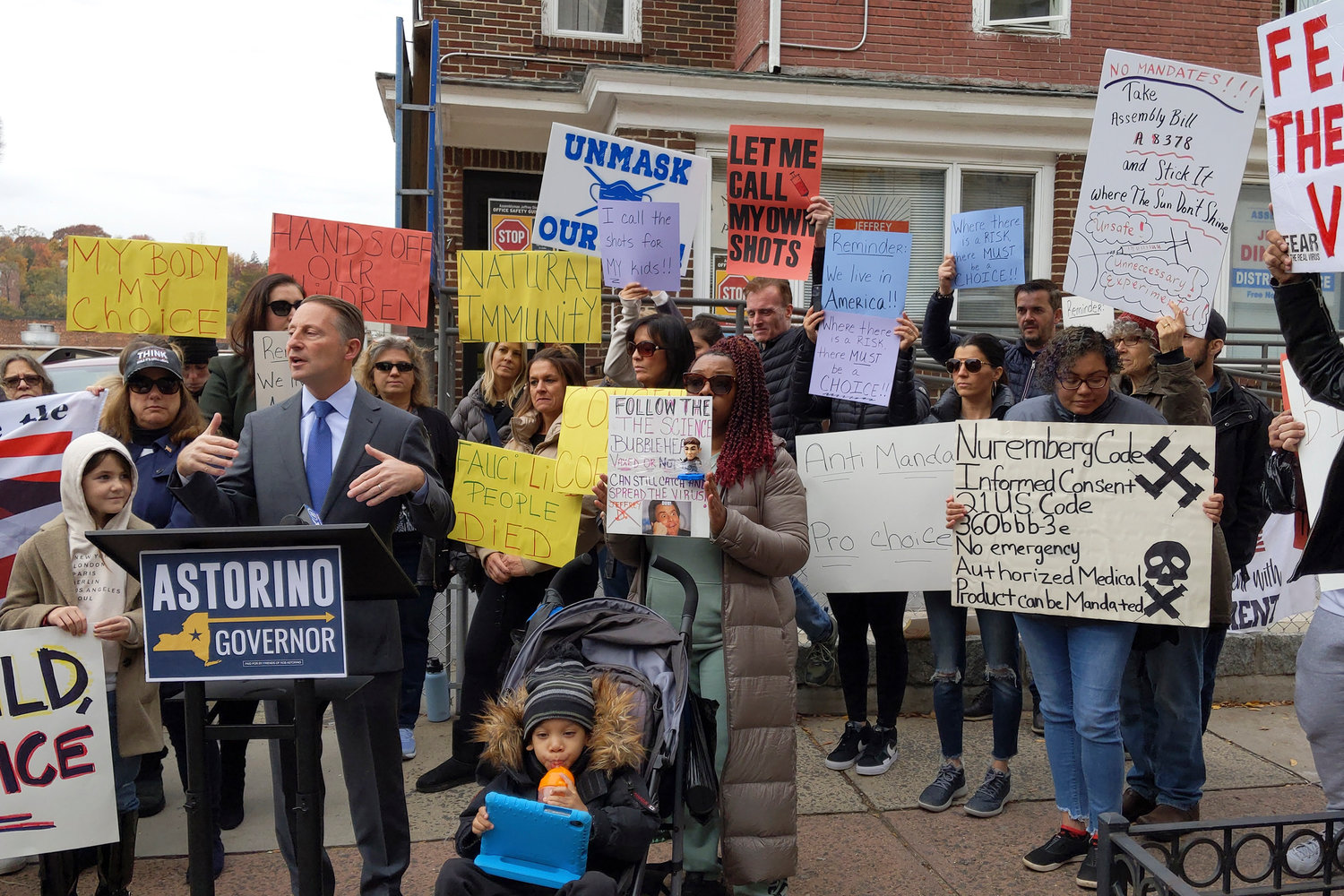 Republican gubernatorial candidate and former Westchester County executive Rob Astorino rallied against Assemblyman Jeffrey Dinowitz’s child vaccine mandate outside the lawmaker’s Kingsbridge Avenue office earlier this month. Cameras caught two protesters displaying what has been described as anti-Semitic imagery during the rally — a swastika emblazoned on a sign, and a man wearing a gold Star of David patch.
Courtesy of Assemblyman Jeffrey Dinowitz 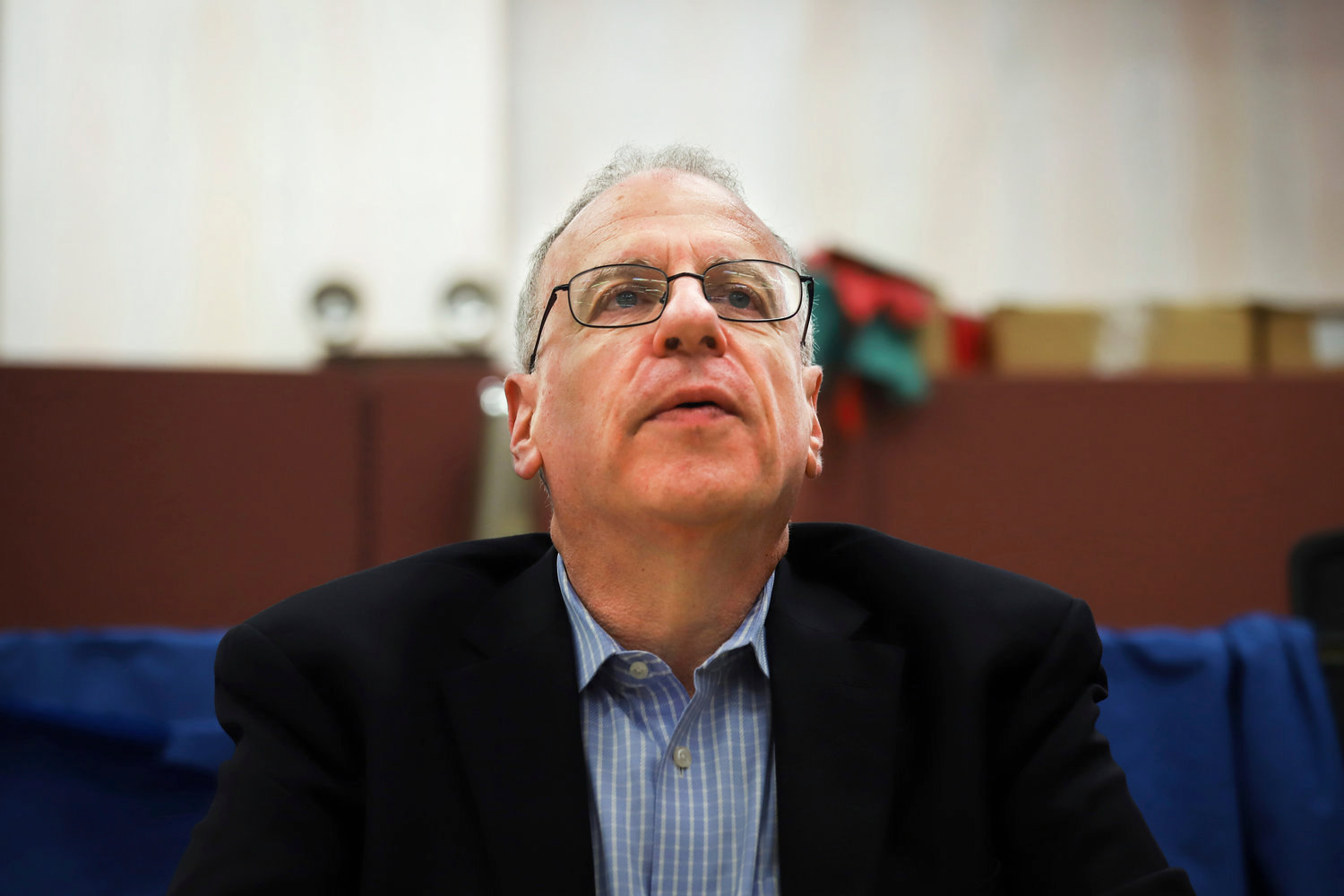 Assemblyman Jeffrey Dinowitz says he was shocked to see anti-Semitic symbols next to Republican gubernatorial candidate Rob Astorino in front of his Kingsbridge Avenue office Nov. 14. One of the protesters displayed a sign with hypodermic needles in the shape of a swastika, while another wore a yellow Star of David patch.
HIRAM ALEJANDRO DURÃN/ File 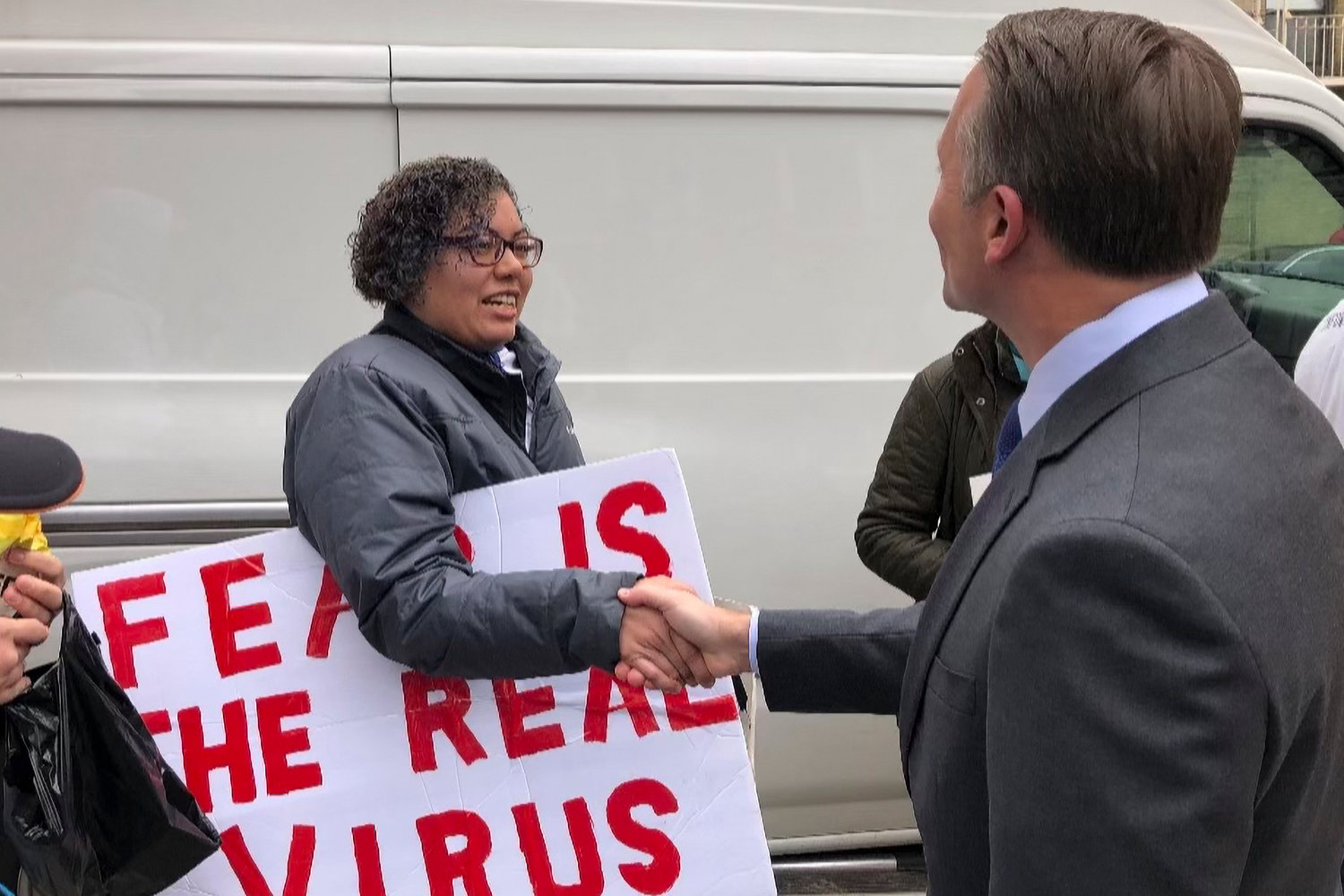 Republican gubernatorial candidate Rob Astorino shakes hands with an anti-vaccine mandate protester who is said to have later held up a sign displaying a swastika during a rally held outside Assemblyman Jeffrey Dinowitz’s office on Kingsbridge Avenue. Astorino claims he didn’t see the sign when he met the woman there, and added he’s just as upset about its usage there as Dinowitz was.
Courtesy of Rob Astorino for Governor
Previous Next
By ETHAN STARK-MILLER

It wasn’t that long ago this corner of the Bronx was shaken when a vandal broke windows of four local synagogues and was ultimately charged with a series of hate crimes.

A Jewish community already on edge, however, didn’t seem to faze one Westchester County politician with his eye on the governor’s mansion, bringing a crowd to the front door of Assemblyman Jeffrey Dinowitz, and leaving with considerable controversy after Dinowitz and others accused the crowd of anti-Semitism.

Rob Astorino wants to return New York’s executive branch to Republicans, and is doing it by rallying against coronavirus vaccine mandates. He protested in front of Dinowitz’s Kingsbridge Avenue office Nov. 14 not because the Assemblyman also is running for governor, but because Dinowitz is an unashamed super-supporter of vaccines — especially the one designed to prevent COVID-19.

Yet, it wasn’t the fact Astorino targeted him in a protest that has Dinowitz fuming more than a week later — but the symbolism some of the former Westchester County executive’s supporters brought with them. More specifically, Nazi symbolism like one sign featuring a swastika and another protester wearing a Star of David the same way Jews were forced to do during the Holocaust.

Astorino was protesting a recent bill Dinowitz introduced mandating all students in the state be vaccinated to attend school. Also introduced in the upper chamber by state Sen. Brad Hoylman, the bill would add the coronavirus shot to the already existing list of vaccines children must get before walking into a classroom.

The mandate would apply to children attending private schools, nurseries and day cares, as well as public schools.

Dinowitz and Hoylman have worked on this issue long before the pandemic. In 2019, the pair passed a bill banning religious exemptions for the already existing list of required school vaccines, which also ignited the ire of anti-vaxxers.

Images from Astorino’s protest featured a number of people with signs, including one woman holding a sign just a few feet from the politician that arranged what appeared to be hypodermic needles into the shape of a swastika, drawing comparisons between Dinowitz’s vaccine mandate and the horrors Jewish people faced in Nazi Germany.

Skipping the rally out of fear he’d be exposed to the coronavirus from unvaccinated protesters, Dinowitz said he only learned of the Nazi symbols when someone from his staff told him about them after the event. The most shocking part of the whole scene, he added, was “when I saw a swastika in our neighborhood … next to a candidate for governor.

“And there was this other guy that had the gold Star of David. I mean, these are Nazi symbols. And maybe these people are too stupid to realize it, I don’t know. But I can’t think of anything more offensive. And it’s not just to me because I’m Jewish. It should be offensive to everybody.”

Despite the apparent proximity of the swastika sign, Astorino claims he didn’t see it during the rally, only finding out about it afterward.

The sign featuring the swastika apparently had two sides. One called the vaccines created by Pfizer and Moderna “experimental,” referencing “crimes against humanity.” Dinowitz pointed out that if his bill became law, it wouldn’t take effect until after the vaccines receive full Food and Drug Administration approval for children between 5 and 11.

The flip side of the sign — which also featured the swastika — contained the phrase “Nuremberg Code,” seeming to suggest the vaccine mandate violates medical ethics established in the wake of horrific Nazi experiments during the Holocaust.

Oliva shared a photo with The Riverdale Press of Astorino shaking the woman’s hand, where she appears to have a different sign under her arm reading “fear is the real virus” and didn’t include the swastika. But she did appear to have the sign with the swastika under her other arm.

“He did not see it,” Oliva said. “And when he spoke with the woman, she had a different sign. And if he did see it … he would have said to remove it. And he would have not continued.”

Furthermore, Oliva said, Astorino is firmly against making comparisons to Nazis or the Holocaust to score political points.

“Rob thinks (the woman) is wrong for having a swastika on a sign, and using it as metaphor,” Oliva said. “And calling the backers of this bill ‘Nazis’ — he thinks that’s wrong.”

After watching a video of the event posted to YouTube by rally-goer Manny Grossman, Dinowitz said he doesn’t buy Astorino didn’t see the swastika.

“I saw the videotape,” Dinowitz said. “He looked straight at that person and the sign. I don’t know what was in his eyes, obviously, but it’s really hard to imagine that he didn’t see that sign.”

This incident is a part of a broader trend, Dinowitz said, where those against vaccine mandates have used Nazi symbolism to make their point about what they see as a draconian policy. Anti-vaxxers have falsely likened the vaccine to medical experiments the Nazis performed on imprisoned people — primarily Jewish people — during the Holocaust, according to one published report. They’ve also used the yellow Star of David to point out what they claim are oppressive vaccine and mask mandates.

For instance, protesters wore Stars of David to a recent government hearing in Kansas, later claiming their inclusion wasn’t offensive. And the mayor of Anchorage, Alaska, called the act of anti-vaccine protesters wearing the Star of David “actually a credit to” Jewish people — a statement he later apologized for.

Rabbi Thomas Gardner — who leads Dinowitz’s synagogue, Riverdale Temple — said the use of anti-Semitic imagery in the anti-vaccine mandate movement shows people maybe aren’t taking the atrocities of the Holocaust as seriously as they should.

“We get upset about certainly anti-Asian, anti-Black comments,” Gardner said. “To have a swastika is basically like holding up a lynch noose in front of a Black politician’s office. It’s no joke. And I think we have to condemn this in the strongest possible terms.”

While Dinowitz admits passing his expanded vaccination mandate legislation is a long shot, the lawmaker says he’s going to work hard to get it on Gov. Kathy Hochul’s desk during the upcoming legislative session that begins in January.

“And that’s how I’m going to handle this.”