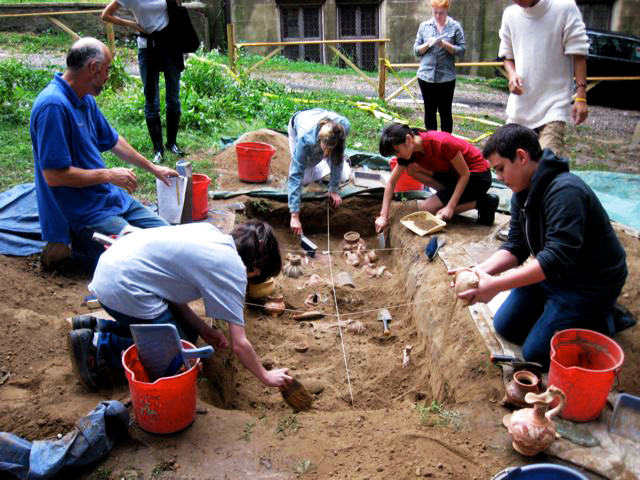 September 30, 2010 - Bronx, NY : Joe, 17, Christopher, 15, and P.J., 10, took part in a mock archaeological dig at the Church of the Mediator on Sept. 30. They worked under the watchful eyes of educators Joanna Lodin and Geoffrey Purcell, a former archaeologist.
Photo by Joanna Lodin
By Nikki Dowling

Geoffrey Purcell, an educator and retired archeologist, dug a large, square-shaped trough in the grounds of The Church of the Mediator in Kingsbridge. He filled the hole with artifact reproductions from Mexico, crafted to look like tools, pottery and human and animal bones from the Aztec and Incan empires.

After the trough was filled with dirt again, he sectioned off eight squares with rope so each student would have their own space to work

Digging in the dirt for ancient artifacts might seem like a strange way to spend class time, but that’s exactly how eight local home schooled teens spent their days from Sept. 28 to Oct. 1.

Before the dig, Mr. Purcell gave them lessons inside the church, teaching students the proper method for excavating the artifacts and what could be learned from them. He played games to teach students about ancient history and showed them pictures of the area in Mexico that contained the site he was replicating.

“He creates as accurate a site as he can,” said Joanna Lodin, a home schooling parent who helped organize the event through the New York City Home Educators Alliance. “It’s incredible to have hands-on learning, it’s great for teamwork … it bonds the teams together and they learn a lot of thinking skills.”

Despite the rain that threatened during the morning of the dig on Sept. 30, the students were enthusiastic. They carefully dusted off objects with brushes before pulling them out of the earth, taking notes and putting everything in categories.

“It’s not just dig stuff up and see what we find,” said Christopher Lodin, a home schooled 15-year-old who has participated in several digs. “We find things in layers and we try to make a story out of it.”

Christopher added that older objects are deeper in the ground. He said he and the other students found bones of different animals, some of which originated in Spain. Christopher said he knew the Spanish invaded Mexico and realized that all the objects found on top of the foreign bones were from after the Spanish invasion.

“It sort of shows us the time period,” he said of the layers.

Zachariah Gjenasha, 13, said he was also enjoying the dig and was particularly excited about excavating several arrowheads.