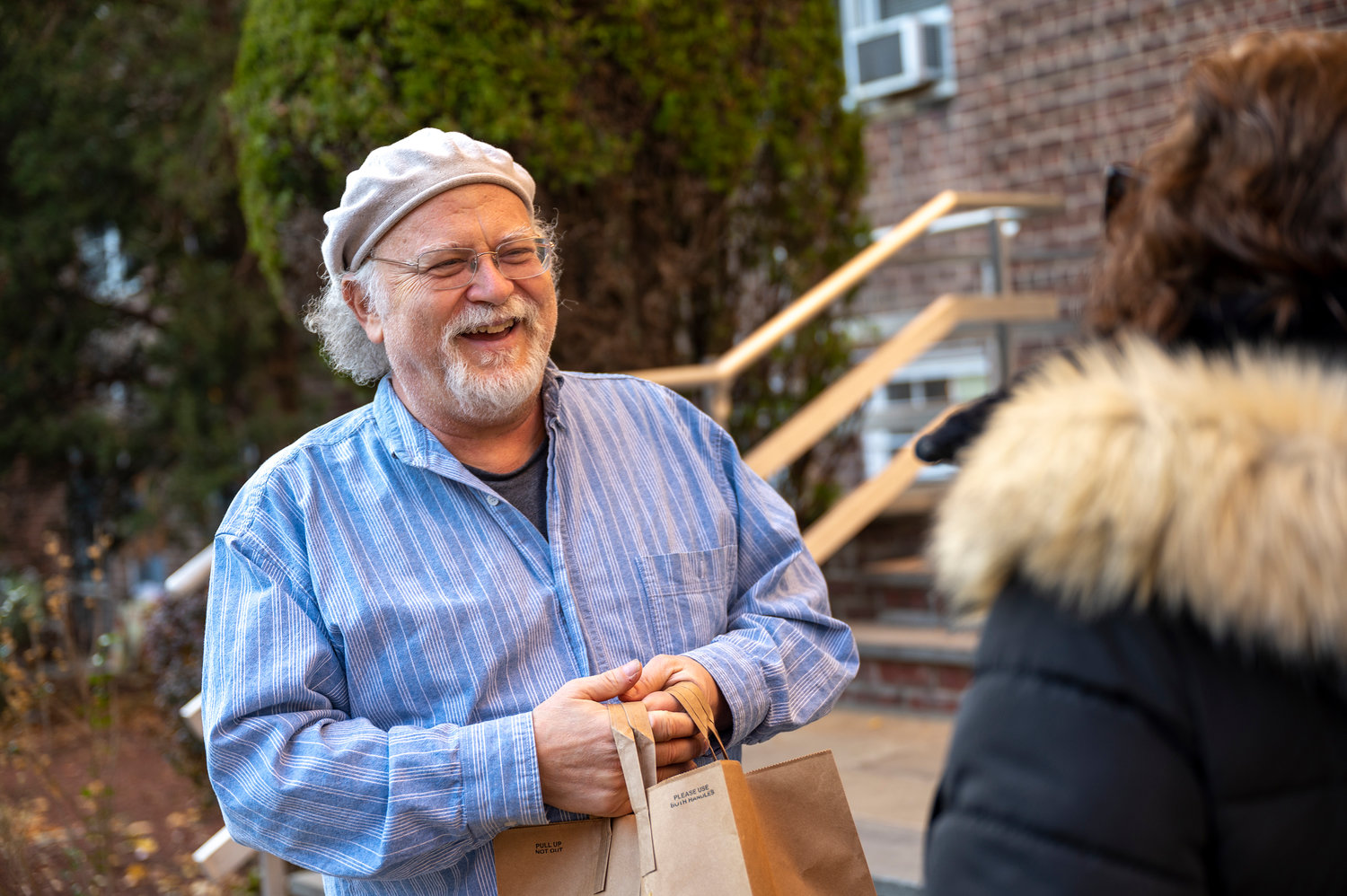 Arnie Adler swapped one of his sourdough breads with his neighbor for her own homemade treat just in time for Thanksgiving. While Adler focused on bartering when he first started baking earlier this year, he’s now selling many more loaves than he’s trading.
HIRAM ALEJANDRO DURÃN 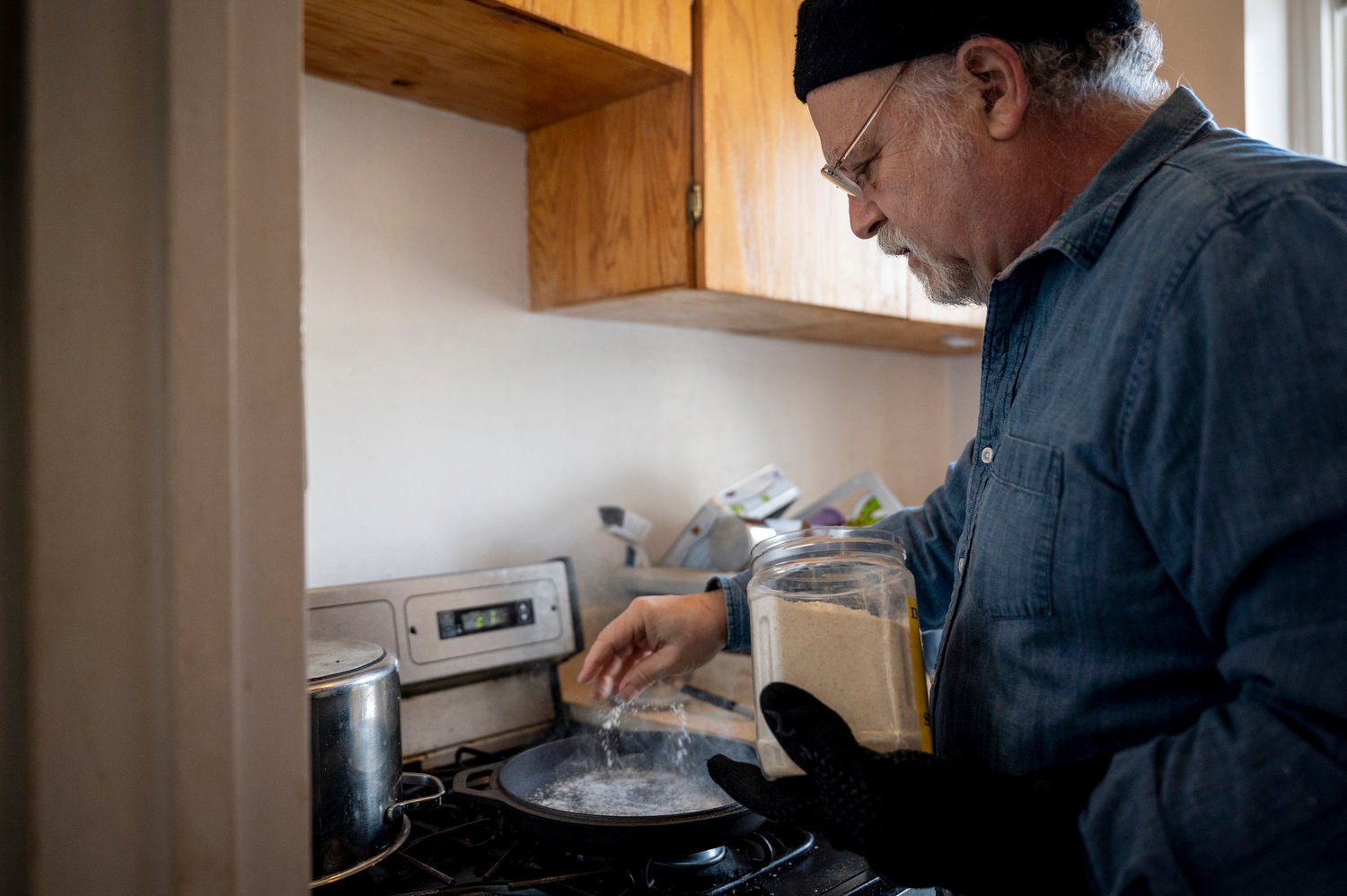 When Arnie Adler first started baking and bartering his own sourdough bread earlier this year, he could only make one loaf at a time. In the months since, Adler has grown his production to four loaves thanks to a new oven as well as a far more efficient technique.
HIRAM ALEJANDRO DURÁN/ File 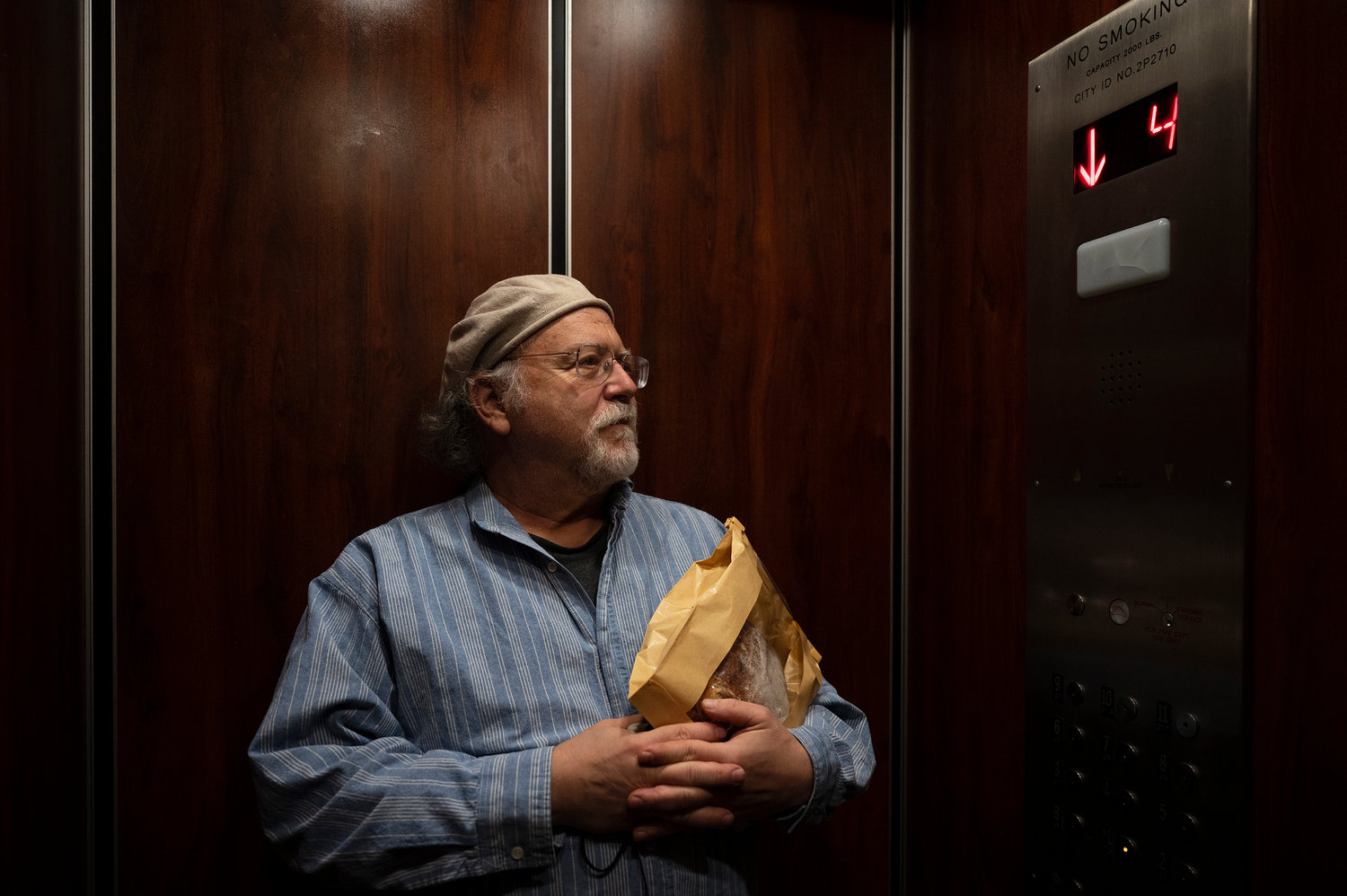 Arnie Adler says he received several orders for his freshly baked sourdough bread ahead of Thanksgiving this year. While most of Adler’s customers buy his bread now, he still barters some loaves for homemade goods like chili and babka cake from his neighbors.
HIRAM ALEJANDRO DURÁN 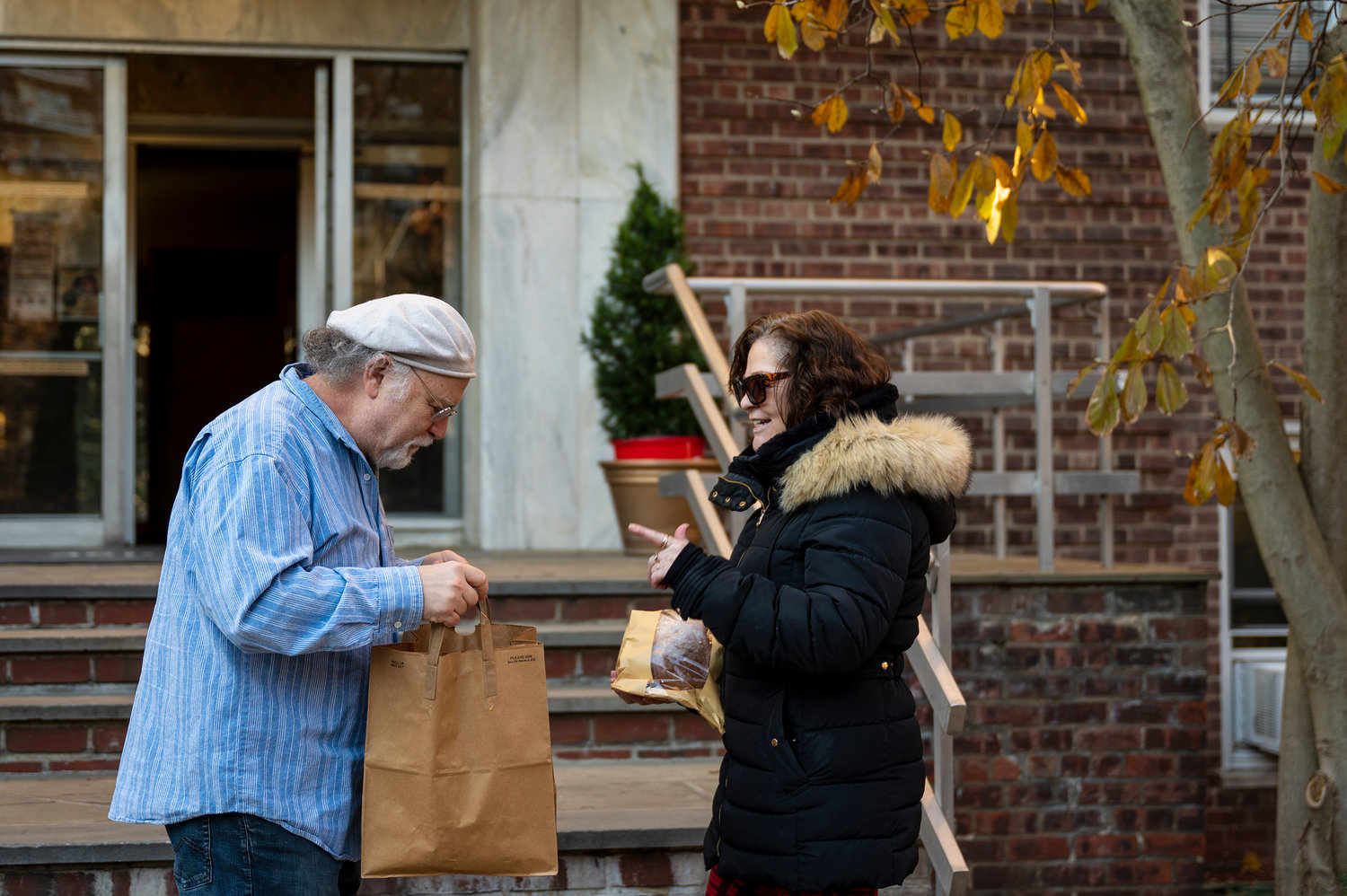 Arnie Adler swapped one of his sourdough breads with his neighbor for her own homemade treat just in time for Thanksgiving. While Adler focused on bartering when he first started baking earlier this year, he’s now selling many more loaves than he’s trading.
HIRAM ALEJANDRO DURÁN 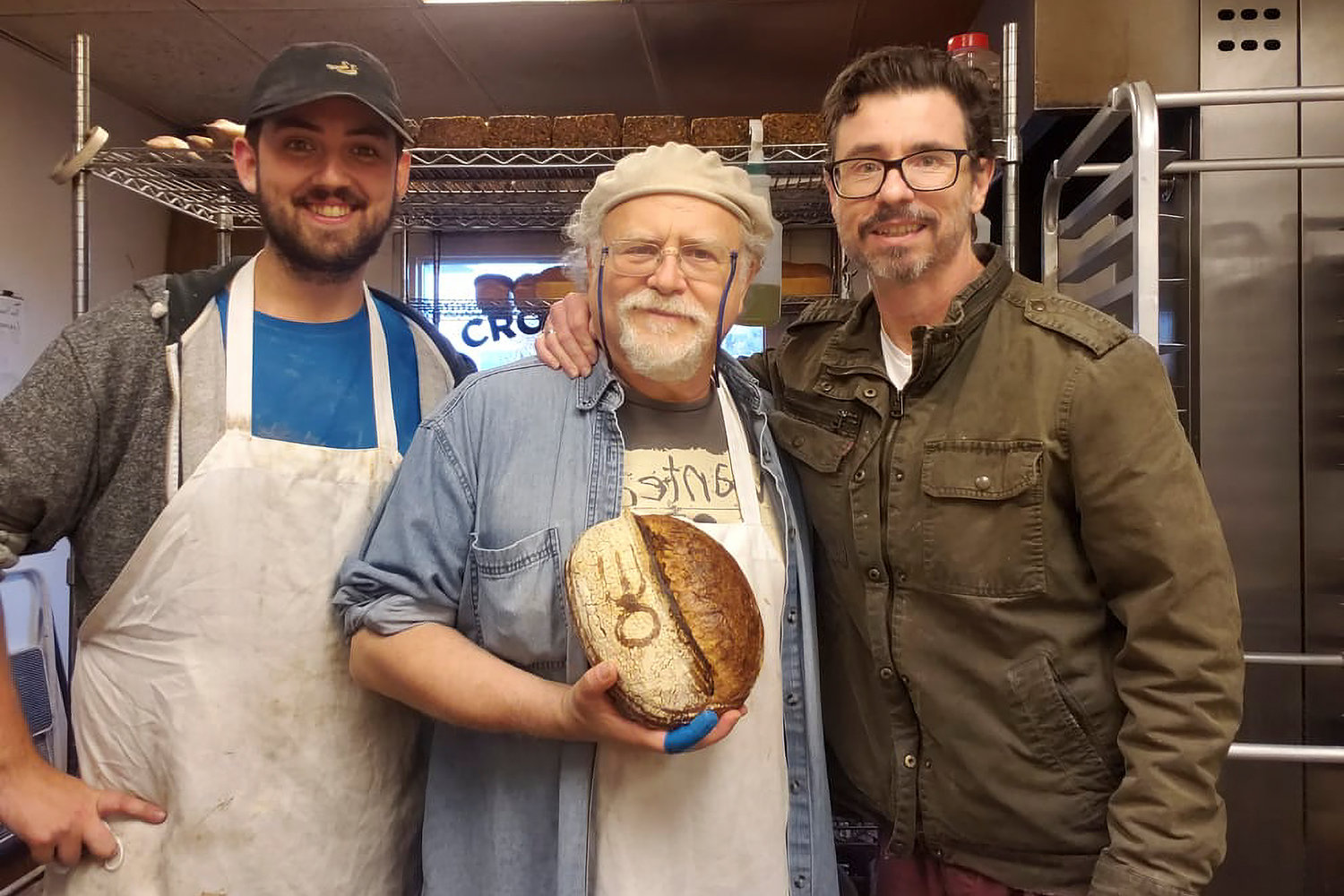 Arnie Adler honed his craft as a bread baker when he apprenticed at Bob’s Well Bread Bakery in California early last month. There Adler became more confident as a baker, learning how make baguettes and even croissants for the first time.
Courtesy of Arnie Adler
Previous Next

So the production has grown four-fold, which sounds enormous, but we're talking about going from one loaf at a time to four.”
ARNIE ADLER
By ETHAN STARK-MILLER

In the days leading up to Thanksgiving, Arnie Adler had his hands full — with flour, dough and yeast that is.

Soon after returning from a trip to California, the photographer-turned-baker scrambled to fill several orders for his freshly baked sourdough bread ahead of turkey day.

But then again, Adler wouldn’t have it any other way.

“I certainly (am not) complaining,” he said. “But while I was away, people saw I was away, and they said, ‘As soon as you get back, I really want a bread.’ So, here I am.”

Like many others, Adler — a self-described avid home chef — tried his hand at baking bread when there was little else to do during the worst days of the coronavirus pandemic. He quickly realized he had a talent for churning out freshly baked sourdough loafs.

By last March, however, Adler discovered there was a limit to how much bread even he could eat. So, he took to one of Riverdale’s community Facebook pages, offering to barter his bread with neighbors for their own specialty homemade items — like chili, babka cake and pizza.

Nine months later, Adler has grown what started as an experimental project into a thriving bread-baking business. While Adler still barters bread from time-to-time, he now sells most of what he bakes.

“Every time someone approaches me, they’ll see a posting on Facebook and they’ll say, ‘But I have nothing to swap,’” Adler said. “And I say, ‘Well if you don’t, then I’ll sell it to you.’ And it seems that’s what most people are up for.”

With his bread’s rising popularity, Adler has had to ramp up his production efforts over the last few months. When he first started baking, he was only able to fit one loaf into his Dutch oven at a time. But when his apartment’s oven died a few months ago, he replaced that with a slightly bigger one not long after.

With the extra oven space, Adler decided to try a new baking system that could accommodate more than one loaf at a time. He cut out the Dutch oven altogether, instead using lava rocks at the bottom of his oven and baking tiles on each of the racks to create a similar steaming effect. This allowed him to increase his yield from a single loaf to four.

“So, the production has grown four-fold (since the spring) — which sounds enormous, but we’re talking about going from one loaf at a time to four,” Adler said. “So, I am not competing with Zaro’s or Panera (Bread) anytime soon. But it allows me to up things and take it to the next level. And see where I want to go with it, and how big I’m going to go with it.”

Adler makes no more than three bread runs a day by using this new system. To make any more bread, however, he thinks he’ll need to expand outside of his apartment to a bigger kitchen space. But opening a commercial bakery isn’t in the cards.

At least not at the moment.

“I don’t have a large bankroll or retirement fund to draw on to just open up a commercial bakery,” Adler said, “which a lot of people in the neighborhood keep on encouraging me to do.”

There are less expensive alternatives, however. Like finding a space with a commercial-grade oven — like a pizzeria or bakery — that would rent to him in their off hours. Other options include renting time in a commercial kitchen space or even using a kitchen in a local synagogue.

While Adler is figuring out how to scale his business, he’s also taking time to hone his skills. He spent a week apprenticing at Bob’s Well Bread Bakery — run by his high school friend Bob Oswaks — in Los Alamos, California, early last month.

“I got to go out there and create more bread in a day than I make in a month,” Adler said. “Just working on it and shaping it and helping to bake it in the ovens and score it, and really fine-tune my technique. It’s kind of like up until now I’ve been learning to do ballet through YouTube videos, and suddenly I get a week to go to the American Ballet Theatre and sit in on classes.”

Adler also tried his hand at making certain kinds of bread — like baguettes — for the first time. He even worked with the bakery’s pastry chef, getting a taste of how to bake a croissant.

Because Oswaks owns the bakery and oversees its two locations, he couldn’t work with Adler directly, instead leaving him in the hands of his head baker and crew. After worrying the bakers would see him as a third wheel, Adler said they considered him part of the team — All of which made the trip a big confidence booster.

“I went out there (and) I didn’t know how it was going to go,” Adler said. “They appreciated the effort I put in, and I was told I was actually helpful, which gave me a sense of if I wanted to start doing this someday — even to work in someone else’s bakery.