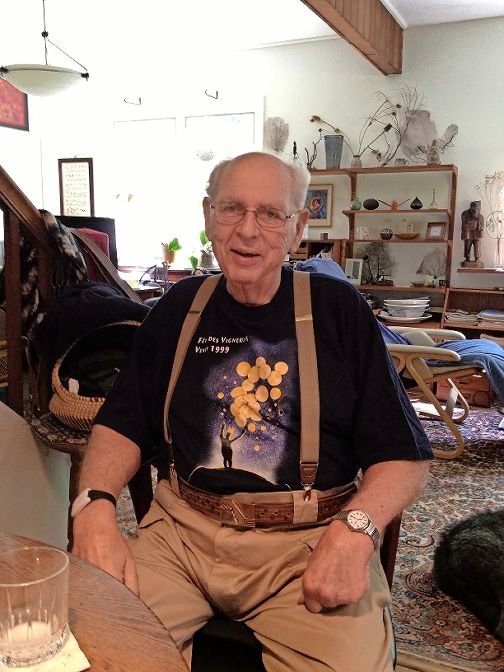 He received his master’s degree in social work from the University of Pennsylvania, served as a psychiatric social worker in the U.S. Army between 1951 and 1953, and taught graduate social work students at SUNY Albany and New York University.

He was best known for his work as the executive director of the Bronx Jewish Community Council between 1980 and 1998, an agency he insisted be referred to as a Jewish-sponsored anti-poverty agency.

He was a proud and self-proclaimed “leftist” and community organizer throughout his life, devoting himself both professionally and personally to helping others.

He was especially partial to welcoming immigrants. Many a Sunday dinner or holiday meal at the Eisen house included an array of multicultural friends and guests.

He was known to find a piece of music from the person’s country of origin, and it would give him great delight to play it for his guests.

All during his illness due to a stroke in 2012, he continued to embrace immigrants by sharing with and listening to the stories of the many home health aides that hailed from a variety of countries.

He embraced the concept of “joie de vivre” fully. For many years, he ran a wine-tasting group, the BOORS — or Bronx Order of Oenological Recidivists — which was featured twice in The New York Times.

He credited his love of wine to this time stationed in France during the Korean War.

Being raised in Brooklyn, he loved the move to the Goldens Bridge colony. He enjoyed outdoor activities as an adult and spent many a summer tent camping with his family and puttering around in his collapsible Klepper kayak.

In later years, he and wife Mera discovered camping in the Virgin Islands.

He loved music from opera to traditional folk, jazz and blues. For many years, he collected drinking songs, which he dreamed of publishing one day.

He made new friends constantly throughout his life. On vacations, he would prefer to stay in a youth or elder hostel rather than a hotel to be better able to meet new and interesting people.

He is survived by his wife of nearly 70 years, Mera Eisen of Goldens Bridge; his daughter Karla Eisen (George H. Wilson) of Gainesville, Virginia; and a nephew, Marc Eisen of New Jersey. He was preceded in death by his sons Erik and Paul Eisen, his brother Joshua (Jess) Eisen, and his sister, Irene Kabot.

Memorial contribution in Arnold Eisen’s memory can be made to the Bronx Jewish Community Council, 2930 Wallace Ave., Bronx, N.Y., 10467, or at BJCCOnline.org/donate.

Jessica Schick, adored by her students, 93