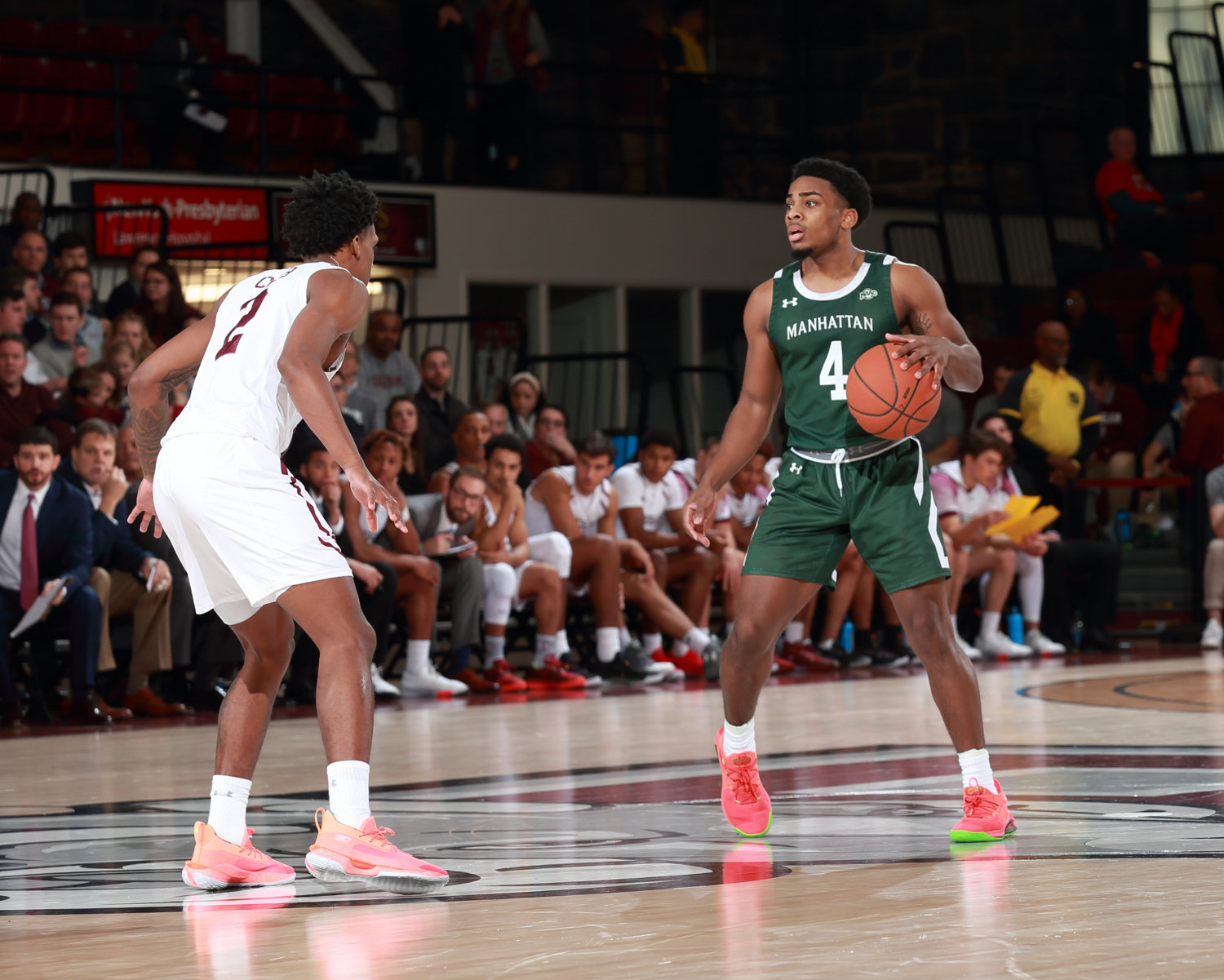 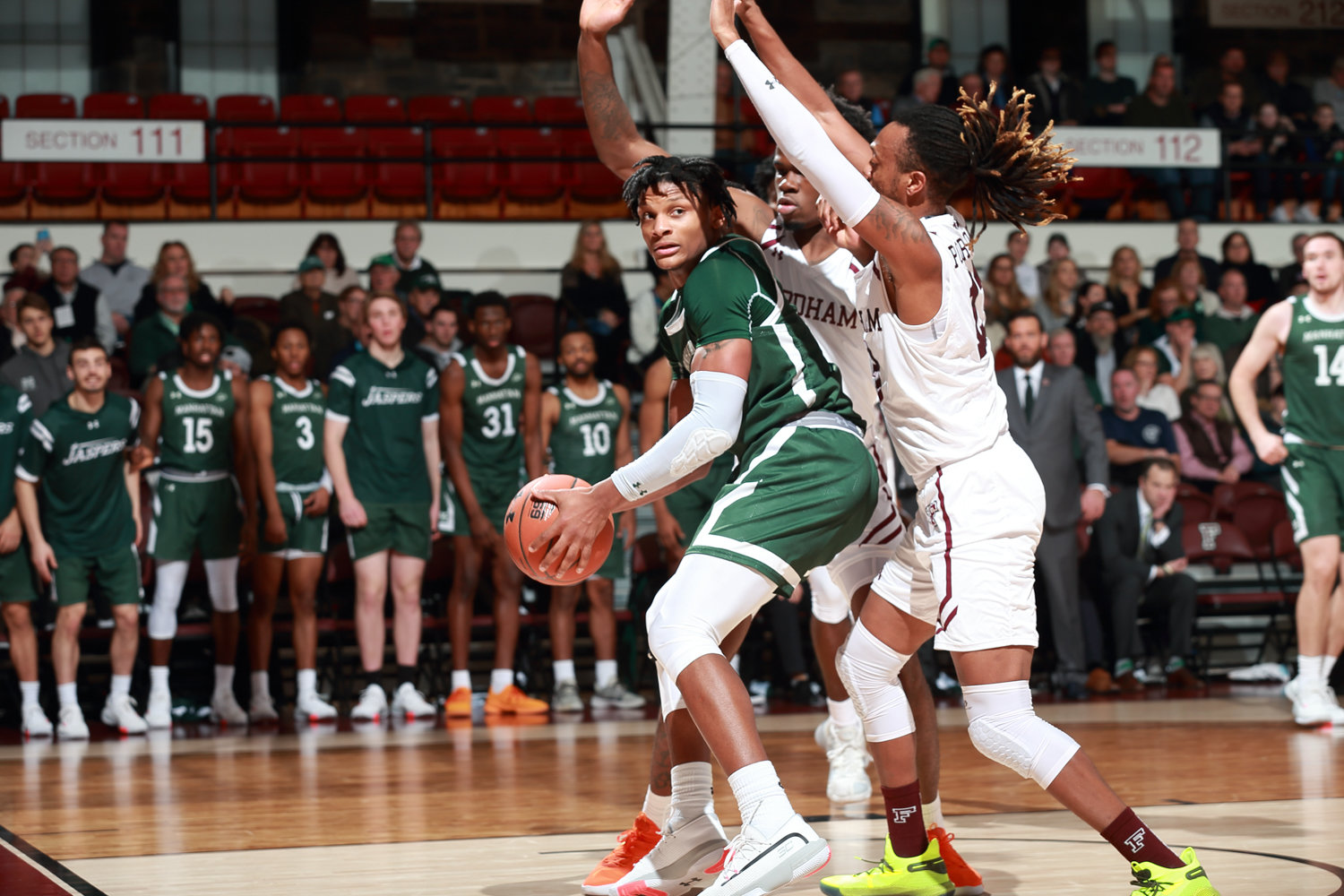 Manhattan College sophomore Tykei Greene is second in scoring and first in rebounding or the Jaspers so far this season.
Courtesy of Manhattan College
Previous Next
By SEAN BRENNAN

There were many things Manhattan College coach Steve Masiello was looking to accomplish when he put together his challenging 2019-20 non-conference schedule. Sure, wins were right at the top of the list, but player growth was almost as important.

It was Masiello’s aim to use the non-con portion of his men’s basketball squad season to work out the kinks and build momentum heading into Metro Atlantic Athletic Conference play, which tips off Jan. 2.

And with a 4-4 record thus far, and one non-conference game remaining — Dec. 22 at Hofstra — Masiello has liked a lot more than he hasn’t with his Jaspers.

“I think, to this point — with the exception of the Stony Brook game (a 65-47 loss) — that’s the only game I wasn’t really happy about,” said Masiello, now in his ninth season at Manhattan.

“I thought in all the other games we competed, we showed signs of getting better. I also think we’ve been fortunate to have four wins. Any time you can do that as a Mid-Major in your non-conference (schedule), that’s a really good thing.”

The Jaspers limped to an 11-21 finish and an 8-10 mark last season in the MAAC. But what that season did do was allow many of Manhattan’s younger players earn serious playing time and get acclimated to the college game. So will that experience pay off this season for Manhattan? Masiello hopes so, but it’s no sure thing.

And just what are those specific areas of concern?

So far this season, the Jaspers are shooting just under 66 percent from the foul line, and averaging a little more than 61 points a game.

And while the team has no player averaging in double figures, it does have four posting at least 9 points a game, with sophomore Samir Stewart leading the team.

There are areas to improve upon for sure, but there also is a lot Masiello likes about these Jaspers, and a lot of it surrounds his sophomore class of Tykei Greene, Christian Hinckson, Warren Williams and Stewart.

“Tykei’s toughness stands out to me, just his ability to rebound the basketball and physically compete,” Masiello said. “Then there’s Samir’s growth and how he has performed in the clutch. But I also think there is more room for (senior) Pauly (Paulicap) and Warren to become more dominant and kind of establish themselves, which I don’t think they’ve really done yet. And I think Christian Hinckson is starting to come along. Against Fordham he had 10 rebounds and five assists, and that excites me a lot.

“But I think there is a ton of improvement left in this team, and that’s really what the next month is really going to be about.”

Manhattan dropped a heartbreaker to Western Michigan last Saturday when the Broncos’ Jared Printy sank a three-pointer with 4.2 seconds to play to edge the Jaspers 59-58. But it’s those types of games Masiello feels will have his Jaspers battle-tested come MAAC play.

Five of Manhattan’s eight games so far this season have come on the road. The Jaspers’ final non-conference game at Hofstra is also on the road, and when Manhattan opens its MAAC season Jan. 2, its first three games also will be away from Draddy Gym, including a two-game swing through Western New York when the Jaspers visit Canisius and Niagara. Never an easy trip.

“You’ve got to find the good in it,” Masiello said. “I think that’s probably the toughest trip on the schedule in our conference, and we got it right off the jump. So we’re going to find out quickly what our team is about. We’re going to see if this non-conference schedule helped us, which I hope it did.”

And how does Masiello see the MAAC shaping up this season?

“You just don’t know how it’s going to play out, and that’s kind of Mid-Major basketball,” he said. “I’ve preached all along whether I’m 2-7 or 7-2, non-conference is just that, your non-conference. The reality at this level is what you do in February and March that determines what happens to you. But right now we’re happy where we are.”