Behind the pen ... and winning the Inkpot 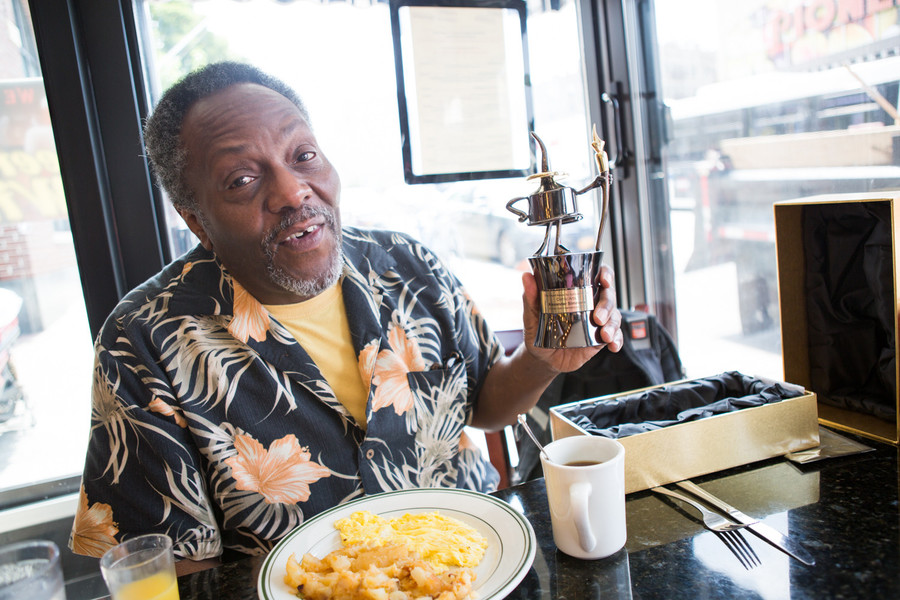 Alex Simmons arrived at the massive San Diego Comic-Con in California as a panelist, but returned home an award winner.

It all began when Comic-Con organizers invited Simmons to the convention as their special guest, even asking him to host a panel. He thought he’d be discussing his Archie or “Blackjack” work, or maybe even the children’s book, “The Raven League,” he co-authored.

In fact, Simmons was more concerned about how many people might actually show up to his panel, since he considers his work under the radar.

“I’m hoping that I didn’t outnumber the audience,” he said. “I walk in there, and there is a nice-sized crowd, but I didn’t fill the room.”

As the moderator introduced Simmons and highlighted his career accomplishments over the past 30 years, she surprised the 65-year-old by revealing he was one of this year’s Inkpot winners. The award is given for outstanding contribution to comics, science-fiction, film or television. Some of this year’s other awardees included Marvel Studios president Kevin Feige and “Goosebumps” creator R.L. Stine.

It’s actually quite an achievement for Simmons, who spends his days at Dale Diner in Kingsbridge. He’s there most mornings seated at one of his favorite tables near the window, typing away on his laptop.

Simmons also is the founder of Kids Comic-Con at Bronx Community College. It’s a family-friendly comic book convention where attendees can meet artists and learn how to get into the industry through workshops and panels. He created the event after he realized the industry was becoming more adult-oriented, the stories getting more violent and pushing out its younger fans.

At some conventions, there would be mature-rated materials at the same table with family-friendly fare, he said.

In his first year, Simmons expected 15 publishers and 100 attendees. Instead, his convention welcomed 45 publishers and at least 800 convention-goers. Now in its 11th year, Kids Comic-Con generally attracts about 800 to 1,000 people, he estimated.

The fact Simmons can call people from Archie, DC Comics and Papercutz — a kids graphic novel publisher — only makes the kid-driven convention that much better, said Jamal Igle, a comic book artist, editor, and 2011 Inkpot award winner. He is the creator of the Molly Danger comic book series.

“It didn’t dawn on me until I was probably in high school that there were other creators of color working in comics,” Igle said. “So to have that exposure early on is nothing but a positive for a young person, male or female.

When Igle heard Simmons had been invited as a special guest to San Diego Comic-Con, he knew it was a telltale sign. However, he said nothing.

“He’s such a great storyteller, and he’s so authentic,” said Leslie Carrara-Rudolph, a puppeteer for the “Sesame Street” character Abby Cadabby. “He speaks to your heart, through his heart.”

Simmons’ modesty also hides his many accomplishments, she added. He mentors many in the industry, including her.

“He’s nurturing your own superhero strength beyond what is there — knowing your vision, listening and caring,” Carrara-Rudolph said. “He’s such an unsung hero. He’s constantly, constantly helping and reaching out to people, but he’s not super fancy. He doesn’t blow his horn or anything.”

In addition to Kids Comic-Con. the Kingsbridge resident also is the co-founder of the Color of Comics art exhibition. Simmons created the character Arron “Blackjack” Day in 1996, who became part of a graphic novel series in 2000. It tells the adventures of an African-American soldier of fortune in the 1930s.

Over the years, Simmons has tried to get Blackjack on television or in films, but so far has been unsuccessful.

“People want to change Blackjack,” Simmons said, primarily by moving him from the Great Depression to modern day. Simmons, however, doesn’t want to make that change.

“There are very few people in this world that make me want to be like them, and he’s one of them,” Igle said. “I love him, pure and simple.”