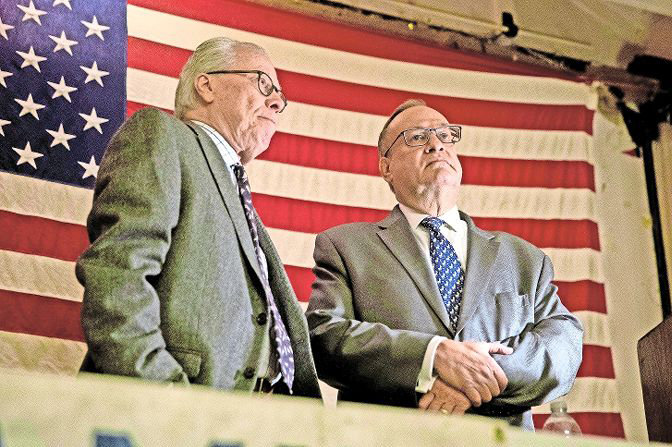 How much power was the Benjamin Franklin Reform Democratic Club ready to cede to its president Michael Heller, right? Depending on who you asked, it ranges from only what’s necessary from people like vice president Bruce Feld, left, to unilateral control from others.
JULIUS CONSTANTINE MOTAL / File 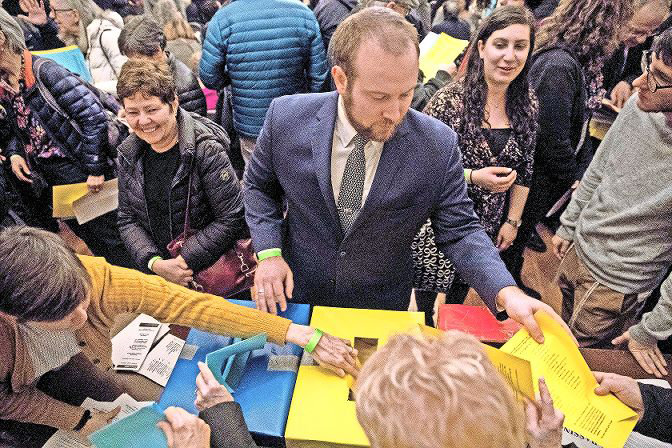 Voting in new officers to the Benjamin Franklin Reform Democratic Club will be much different than it was when club volunteer and Assemblyman Jeffrey Dinowitz staffer Ivan ‘Duffy’ Nedds was running the election show earlier this year. The club has left it up to its president, Michael Heller, to figure it out.
JULIUS CONSTANTINE MOTAL / File 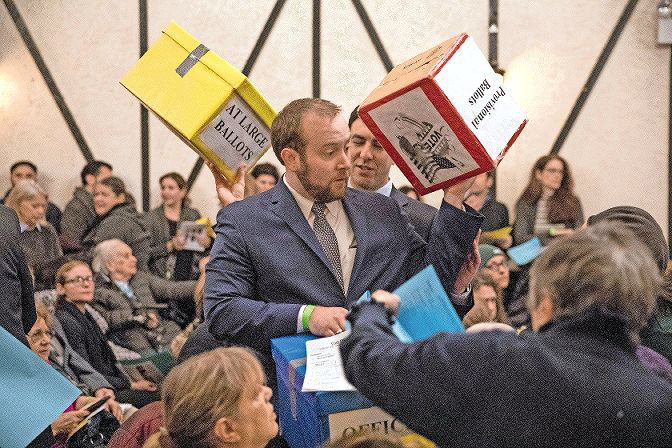 Voting in new officers to the Benjamin Franklin Reform Democratic Club will be much different than it was when club volunteer and Assemblyman Jeffrey Dinowitz staffer Ivan ‘Duffy’ Nedds was running the election show earlier this year. The club has left it up to its president, Michael Heller, to figure it out.
JULIUS CONSTANTINE MOTAL / File
Previous Next
By MICHAEL HINMAN

Controversy surrounded last January’s officer election at the Benjamin Franklin Reform Democratic Club as hand-picked candidates were openly challenged for the first time in years. One of the region’s largest political clubs — deeply entwined with the Bronx Democratic Party — faced questions about fair elections and respecting healthy oppositions, as more people turned out to vote than have ever attended a club event.

That election is now part of the past, with the “insurgent” slate losing its bid, and everyone settling down to back Democrats up and down the ticket in last November’s election.

Yet, it’s the end of the year again. That’s means it’s time for officer elections. Conducting those elections, however, can’t look anything like the crowded American Legion space of last time with the coronavirus pandemic and all. Tasked to find a new way isn’t a committee or some other working group.

Instead, the Ben Franklin Club has turned to one man to help members pick officers for this year: Club president Michael Heller. While the executive committee vote to give Heller this authority passed unanimously, the reception from the rest of the club was anything but.

Heller shared the committee’s resolution putting him in charge of creating a COVID-era elections system during a city council candidates forum the Ben Franklin Club hosted last week. Putting something like this together, especially with just weeks to go before the membership will vote on officers, was “like trying to build a plane while it’s in the air,” he said.

“The executive committee had an extensive discussion on how we go forward and how we will function,” Heller said.

The committee tasked him to develop these new procedures, and to consult with anyone he “deemed necessary” to help, according to the resolution, as obtained by The Riverdale Press. The resolution doesn’t appear to specify what exactly Heller is supposed to do with this plan once he formulates it, and that raised the eyebrows of a few members in the forum, including city council candidate Dan Padernacht.

“Is the executive committee through this resolution yielding power to you as president of the club to change the election procedures for both officers and the (city council candidate) endorsement process?” Padernacht asked.

Padernacht didn’t like what he heard, telling Heller that “you’re changing the process for the way we do elections, which are in the bylaws.”

The club’s bylaws, which are posted on its website, detail the officer election process that requires members to be present to cast a ballot. Because the coronavirus makes such gatherings impossible, if not outright illegal during the public health crisis, such rules won’t be followed.

But a couple other members pointed out after the candidates forum that the bylaws also are clear on how the club is allowed to change them — and any change requires at least one vote, if not two, from the full membership.

Yet that’s exactly what’s going to happen, Heller told The Press a couple days after that forum.

In fact, Heller has an election plan ready, which he’ll present to the full membership Thursday night, giving them a chance to approve or reject it with their votes.

“The executive committee did not grant me unilateral authority,” Heller said. “Nothing nefarious has happened. In my mind, as we’re trying to do this, time is very short, and we faced a huge compression in terms of how we normally do meetings. We have to develop some kind of system that is fair to someone participating electronically.”

The executive committee never intended for Heller’s elections revamp to become part of the rules without a full membership vote, he said. Instead, the intention was to have one person knowledgeable in the club’s rules to develop a system faster than what a working group could, citing the old adage that a “camel is a horse designed by committee.”

Yet Padernacht says he’s not buying it.

“It appears to me that Mr. Heller is backtracking,” he said. “The question that I asked the other night was very clear, as were his answers.”

Although there appears to be ambiguity in the resolution, Padernacht points out that if the committee simply wanted Heller to develop an election plan and bring it up for a full vote, they wouldn’t need to pass a resolution directing him to.

Heller admits that he saw “all these electronic hands going up simultaneously” at the candidate forum after he presented the resolution, but cut off discussion almost immediately because he said the forum wasn’t the appropriate place to discuss the resolution or its impacts.

Another member, Sue Dodell, did get a chance to speak before Heller shut down the conversation, sharing what she said was a simple idea to get through the next elections: Mimic the absentee ballot method used for government elections.

“I believe you can have a ranked-choice endorsement, and for that matter, a ranked choice on officers,” Dodell said. “You can do it with a secret ballot — there is no reason you can’t.

“I am very concerned about this action, and I think it’s completely unnecessary, and it violated our bylaws.”

Heller, however, says that was never his intention.

“Normally we’re governed by the bylaws,” Heller told The Press, “but again, these are not normal times.”