Bernice King, one of USA's oldest women, dies at 111 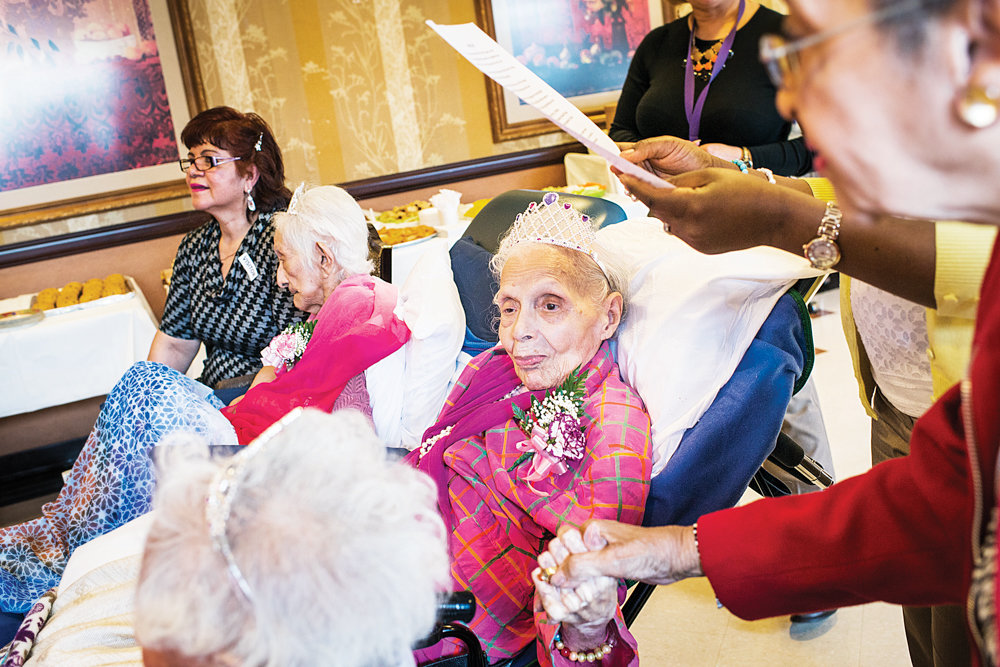 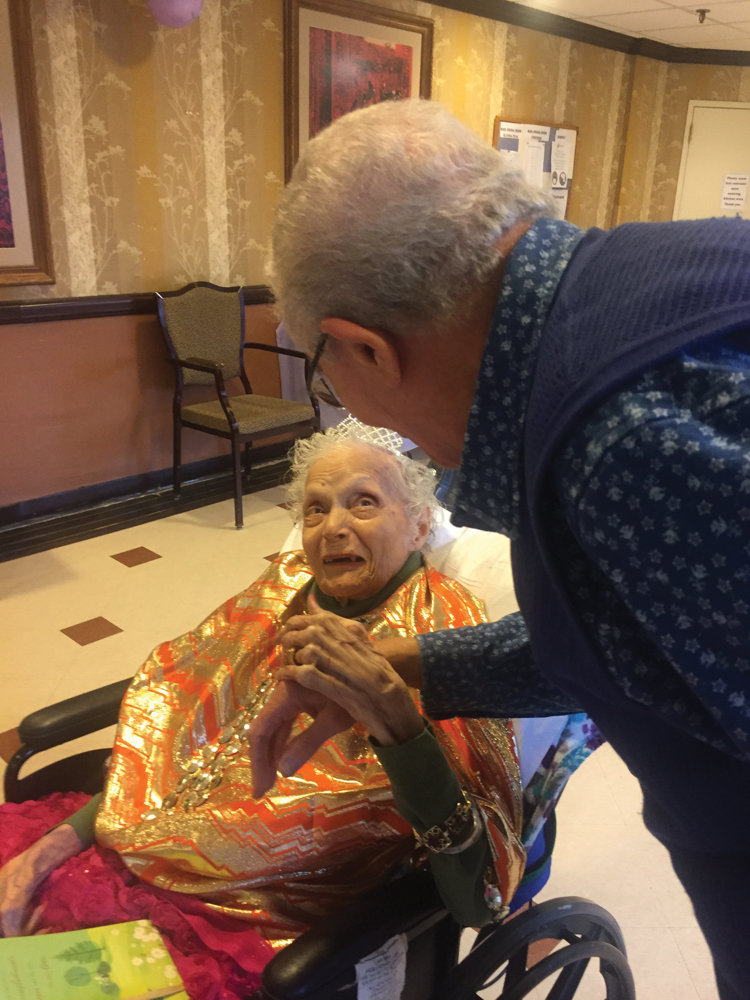 Dozens of people joined Bernice King to celebrate her 110th birthday in 2017 at Manhattanville Health Care Center, including many friends who have known her for decades. King died March 28, just a week shy of her 112th birthday.
MICHAEL HINMAN / File 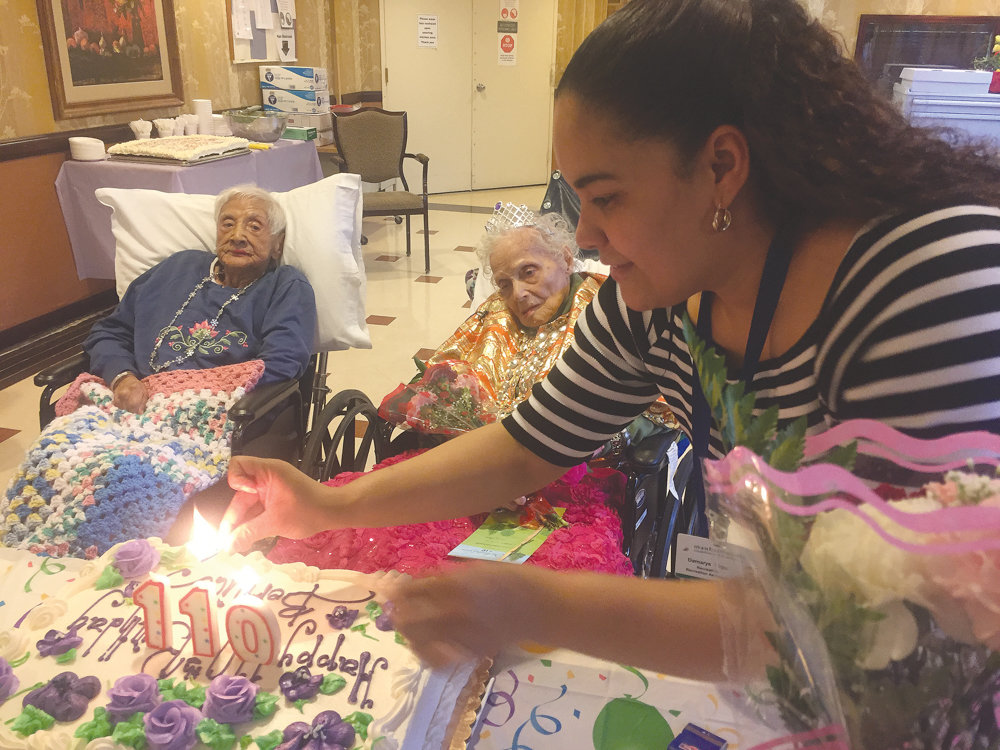 Bernice King dons a tiara with a shiny gold and red shawl as she watches the candles lit for her 110th birthday cake at Manhattanville Health Care Center in 2017. King died March 28, just a week short of her 112th birthday.
MICHAEL HINMAN / File
Previous Next
By MICHAEL HINMAN

Bernice King may have been clearly one of the oldest people living in this part of the Bronx, but she also was one of the feistiest.

She traveled the world, would bounce between homes in both the city and in Saratoga County upstate, and lived on her own until she was 105 when a previous hip surgery finally caught up to her.

King ruled Manhattanville Health Care Center on West 231st Street the moment she arrived. And now those who knew her best are mourning after passing away March 28, just a week shy of her 112th birthday.

“Being a nice person can really get you far in life,” said Henry Coshburn Jr., King’s nephew and closest living relative, during a 2017 birthday party at Manhattanville. “She always has a smile on her face, and she really enjoys life, every single day.”

King was born April 4, 1907, growing up in Flushing, graduating from the Pratt Institute in Brooklyn, and dreaming of becoming a fashion designer. Instead, King focused on home life, eventually marrying a World War II veteran, who would die a few years after the war.

She would spend 25 years designing children’s clothing, and then focus on living her life to the fullest. She would travel anywhere planes and boats could take her and her sister, Dorothy Coshburn — Henry’s mother — and that was just the start of it.

“I once was a singer,” King told The Riverdale Press during her 108th birthday party in 2015. “I once was a dancer. Today, I am just very happy to be with you.”

Although King would focus on the positive parts of her life, there were times she struggled in a world that was rarely blind to race.

“Going through life as a black American at the time, there would be things you were exposed to,” Coshburn told The Press in 2015. He remembers hearing about when his mother and aunt attended St. George’s Episcopal Church on Flushing’s 38th Avenue in the early 1920s — that is until it was time for confirmation.

“It so happened that, right when they were about to complete their confirmation class, the director pulled them aside and told them, ‘I’m sorry. You’re black. You can’t be confirmed into the church here,’” Coshburn said at the time.

The sisters left the church on the spot, and it wouldn’t be until years later King would join a Methodist church.

“You can be traumatized, or you can move on,” Coshburn said. “My aunt belongs to the school of moving on.”

Bernice King was born to Maude and Joseph Derrick, who would later live in both Queens and Manhattan while summering in Saratoga Springs. Her maternal grandfather was born in Antigua, but gained his American citizenship by enlisting in the U.S. Navy and serving on the USS Monitor during the battle of Hampton Roads during the Civil War.

King was a founding member of the Patricians, an organization of Pratt Institute graduates active in the 1940s and 1950s that raised funds for underprivileged students.

Besides her nephew Henry Coshburn, King is survived by a niece and great nieces and nephews. She was preceded in death by husband John A. King, sister Dorothy Coshburn and brother William Derrick, as well as a daughter who died shortly after birth in the 1930s.

King was a member of a very elite list known as “supercentenarians,” or people who reach 110 years old. In fact, the Gerontology Research Group says that only 1,500 supercentenarians have been documented in history. The odds of reaching this level after hitting 100 is 1-in-1,000, researchers say — about the same odds of catching a foul ball at a baseball game.

At the time of her passing, published reports had King listed as the 12th oldest person in the country, just a few days behind Texas supercentenarian Bernice Wallace, who herself died Feb. 15.

Yet, King wasn’t the oldest person in New York. That title belongs to Alelia Murphy in Harlem, who is approaching her 114th birthday in July, and is currently the country’s oldest living person.