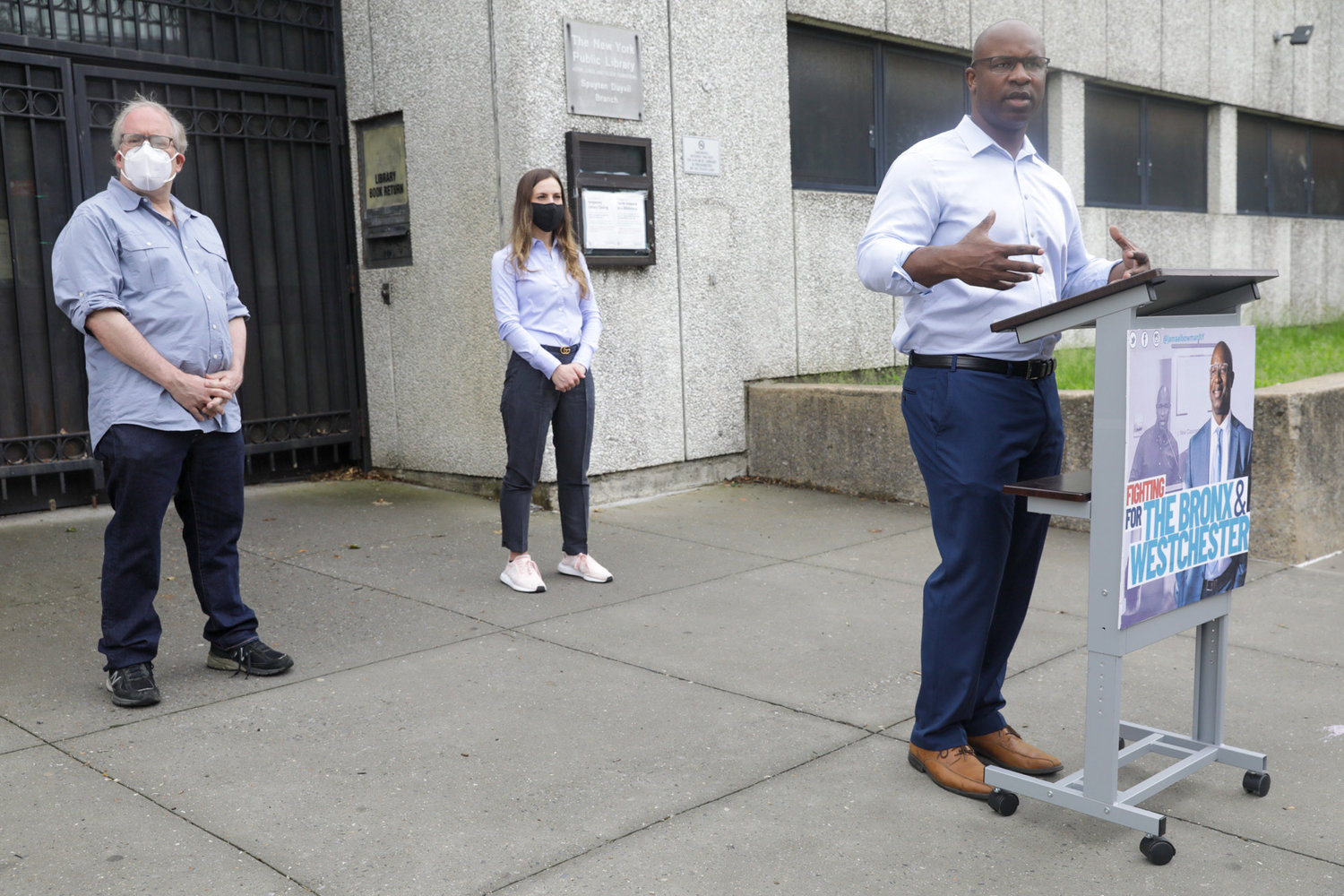 While Bowman has picked up several notable endorsements in the last week — including former opponent Andom Ghebreghiorgis , U.S. Rep. Alexandria Ocasio-Cortez, and the city's first public advocate Mark Green — Biaggi’s endorsement came as a surprise, as she had previously endorsed Engel, who was first elected to Congress in 1988, defeating her grandfather, then-U.S. Rep. Mario Biaggi, in the Democratic primary.

“I have to acknowledge something,” Biaggi said at a news conference in front of the Spuyten Duyvil Library on Friday. “At the end of 2019, I stood in this community, and I said ‘It’s not the time to be endorsing Democrats who are running against incumbents.’”

At the time, Biaggi wanted to focus on the presidential race and booting Donald Trump out of the White House.

“The world has changed, like, 180, practically overnight,” Biaggi told The Riverdale Press. “We would be remiss not to have leadership of the future to represent this district.”

Biaggi's decision came just days after Engel was caught on a hot mic while touring areas plagued by violence and property damage on Fordham Road with colleague U.S. Rep. Adriano Espaillat and Bronx borough president Ruben Diaz Jr. It was on that mic, before a rather impromptu press conference, Engel reportedly asked to speak, even insisting when Diaz said no, saying, "If I didn't have a primary, I wouldn't care."

Biaggi didn't cite that as the only reason she made her decision, but said she did try to reach the congressman ahead of making a public announcement, to no avail.

Late last year, Biaggi cross-endorsed both Engel and Assemblyman Jeffrey Dinowitz, as what appeared to be a smoothing of relations between the three. While Dinowitz and Engel have been longtime political allies, Dinowitz endorsed Jeffrey Klein to continue in the senate in 2018 — while Engel remained silent — and had been cool to Biaggi overthrowing Klein in the race.  But as quickly as the three came together, they splintered just as fast, especially over leadership of one of the Bronx's most powerful Democratic organizations, the Benjamin Franklin Reform Democratic Club where Biaggi supported a slate of officers that were opposed to those backed by Dinowitz and Engel.

Yet, even after that, the cross-endorsements appeared to remain in place. But now that Biaggi has broken from it, it’s unclear if Dinowitz and Engel will continue to endorse her.

"As the senator knows, nothing has changed about my policy positions from the period during which she was endorsing me over the last year,” Engel told The Press, in a statement. “Nothing. I will stand by my record."

Dinowitz spokesman Frederic Klein simply said that whether the endorsement still exists is "something that should be asked of Ms. Biaggi."

Bowman, an educator and founder of Cornerstone Academy for Social Action, said Engel wasn’t present enough in the community he represents.

Facing the aftermath of the coronavirus pandemic nationally and what has so far been a full week of protest in New York City, Stringer said the challenges facing government officials “had never been greater.”

“We need somebody who is going to go to Washington with a clear, energetic agenda,” the comptroller with Riverdale ties said. “I believe Jamaal Bowman is the member of Congress for these times.”

Early voting for the June 23 primary begins June 13, and voters have until June 16 to apply for an absentee ballot if they have not already received one. Information about absentee ballots — which can be used for fear of getting sick with the coronavirus — are available at Elections.ny.gov/VotingAbsentee.

“Today, I stand here with two warriors and fighters at the city and state levels, who have fought for education, housing, women’s rights," Bowman said. "This is an honor, and this is a privilege, and this is something that’s not about me winning a single election and going to Congress alone and doing it alone. It’s about all of us going to Congress.”

CORRECTION: Eliot Engel didn't make an endorsement in the state senate race in 2018.