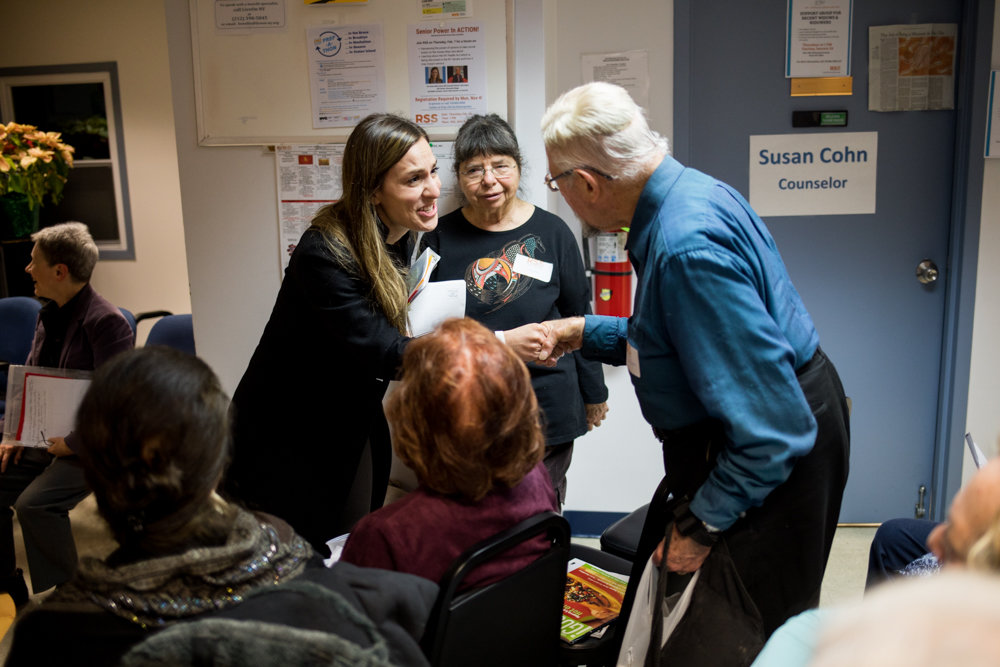 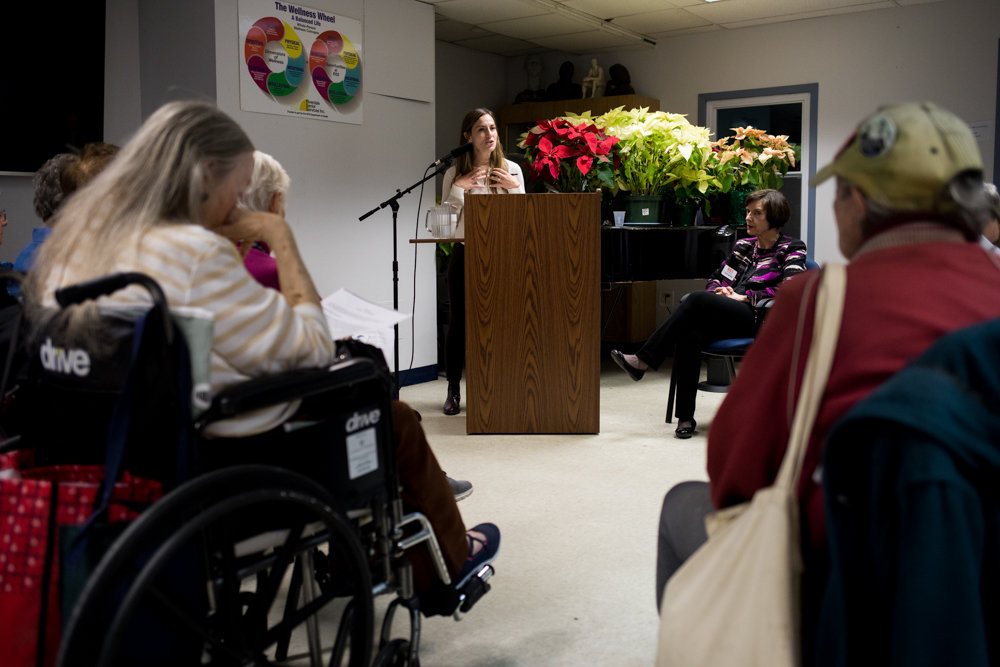 State Sen. Alessandra Biaggi speaks to senior citizens at RSS-Riverdale Senior Services about the New York Health Act, which she hopes will become law. Following her formal remarks, Biaggi fielded questions from the audience about the finer points of the proposed legislation that would bring universal health care to the entire state.
JULIUS CONSTANTINE MOTAL 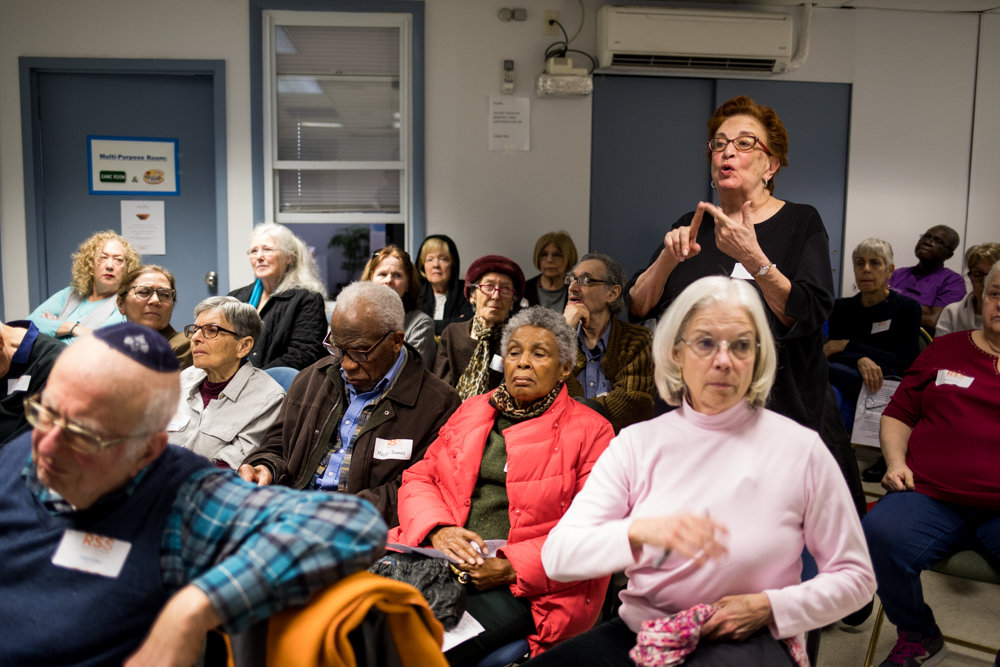 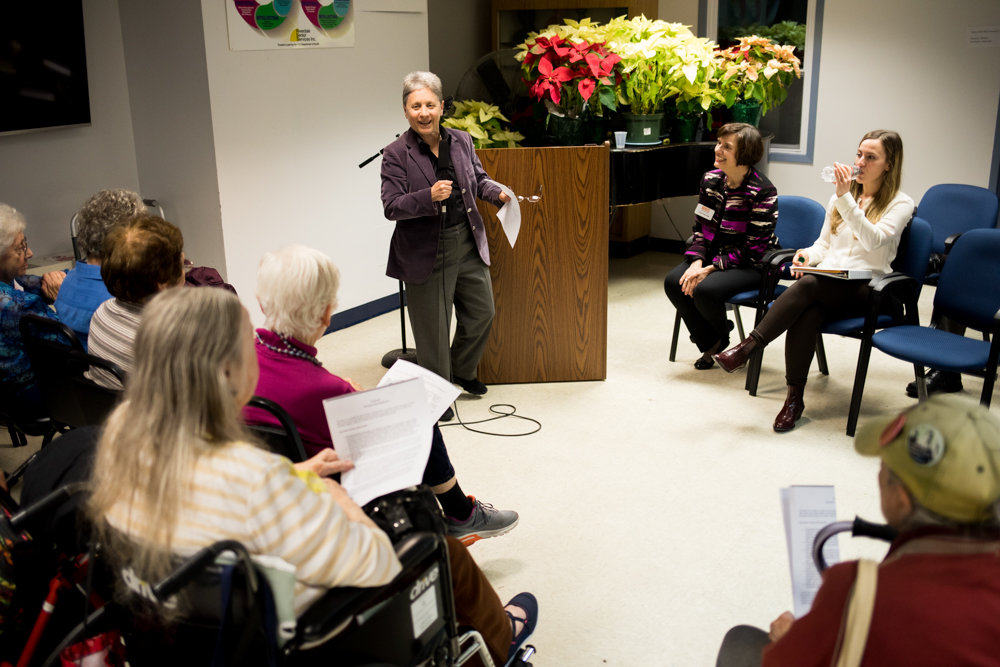 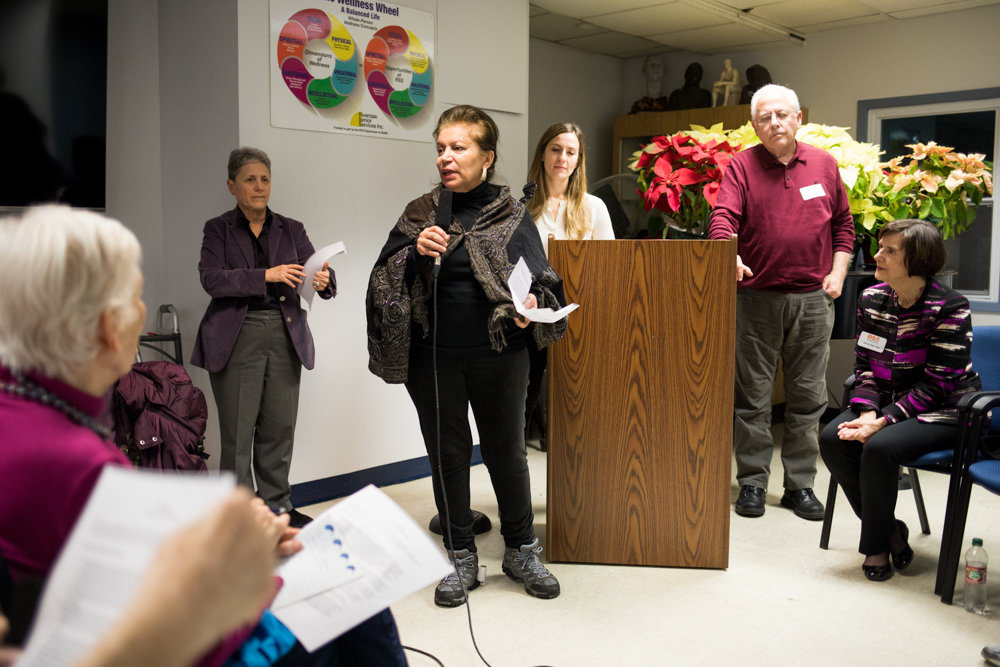 Yona Bello, center, talks about the relatively low cost of her health care at an information session about the New York Health Act at RSS-Riverdale Senior Services. Bello expressed concern about having to pay more to support universal health care.
JULIUS CONSTANTINE MOTAL
Previous Next
Health care act not a done deal quite yet

State Sen. Alessandra Biaggi remains committed to making New York the first state to implement a single-payer health care system. But even she admits there are still some obstacles in the way of getting the New York Health Act implemented — and at least one of them is out of her control.

“I think some of the trickiness with the New York Health Act is the fact that it would require waivers from the federal government,” Biaggi told The Riverdale Press last January just after she was inaugurated.

“Obviously, we are not being led by someone who is reasonable, so it’s probably unlikely that our president at this time would give New York State a waiver for Medicare and Medicaid, and that’s a barrier for getting this done.”

Also, if single-payer is implemented in New York, all eyes will be on the state — and any misstep could doom any chances of a nationwide rollout at some point.

“This is a bill that is going to require a lot of thought for many reasons,” Biaggi said.

“There is a large fiscal component to it, and no other state has gotten it right. It’s going to take a lot of thoughtfulness, it’s going to take probably hearings and really making sure that we have the right financial and economic plan to roll this out so that, down the road, it doesn’t fail.”

That does require supporters to understand the realities still plaguing the bill, but at the same time maintaining optimism on what the future might bring.

“We have to be realistic, but remain hopeful that that is kind of how progress inches forward,” Biaggi said, “and then ultimately goes over the finish line.”

One of Alessandra Biaggi’s main issues she championed on the campaign trail to win the state senate seat she now holds was passage of what could become the country’s first single-payer health care system, the New York Health Act.

Now, the senator is making good on her promise with plans to push the health care bill through her chamber where it stalled many times before. But first, Biaggi took some time last week to stop by RSS-Riverdale Senior Services to hear what baby boomers and the Silent Generation had to say about what would likely be the biggest reinvention of health care in the state’s history.

“Every single New Yorker, no matter what their income bracket or the job you have or where you live, you will be able to have health care,” Biaggi shared during a forum at the 2600 Netherland Ave., location. “Health care that is not only affordable, but (you will be) able to have all the things not covered by your current insurance plan.”

The plan would essentially be Medicare for All, the senator said, but instituted at the state level.

Gone would be medical insurance through private carriers. Instead, health care would become a government service, paid for by taxes.

Both California and Vermont have tried to pass similar bills, but failed.

Although the New York Health Act has made it through the Assembly more than once, the Republican-controlled senate never considered it.

But the Republicans are no longer in power, and Biaggi says she’s determined to make history throughout New York. Not only would it shift the financial burden of health services, but pharmaceutical companies would no longer have all the power when it comes to prescription pricing as the government — not the insurance companies — would be a major player at the negotiation table, Biaggi added.

Getting the bill passed is easier now with Democrats in control — making sure it works the way it’s intended is something Biaggi is being quite careful about. That’s why forums like the one at RSS are important to her.

“Health care is a basic human right,” the senator said. “We do not believe people should have to wait any longer for health care.”

Under the current bill, people will still have their choice of doctors, hospitals and care, said Bobbie Sackman, member leader of New York Caring Majority, an advocacy group pushing single-payer.

Long-term care will remain covered, important services for many who are elderly or disabled.

Biaggi said it was through her grandparents she was able to see firsthand the importance of quality long-term care. Her grandmother’s health, instead of improving, declined when she was placed into a nursing home compared to her grandfather, who was given in-home care and outlived her.

“Medicare somehow left out your teeth, your ears and your eyes,” Sackman said. “So whoever wrote this law was blind, couldn’t chew, and couldn’t hear. I’m saying that facetiously of course.”

The plan, however, likely means higher taxes, and some people like Yona Bello aren’t for that.

“If it does pass, Florida here I come,” Bello said. “Aetna has a huge service program, and so top doctors are taking it. You get an annual visit for free, and I get free vision. We’re going to see an exit on good doctors in New York.”

Bello, who considers herself middle class, is not looking forward to paying taxes needed to support the act when New York City already has such high taxes. And it doesn’t hurt Bello is happy with her current plan through Aetna.

Bello isn’t alone. Gov. Andrew Cuomo has been wishy-washy on the bill, and it’s not exactly clear what might happen once the New York Health Act reaches his desk.

But then again, not everyone has the kind of insurance Bello and others enjoy, Biaggi said. In fact, some 600,000 New Yorkers don’t have health insurance.

“This is an important piece of legislation because it affects every single person in New York State, and especially could affect the entire country because it could inspire other states,” Biaggi said. “If we could get this right in New York, which I think that we can, it will allow for other states to follow form.