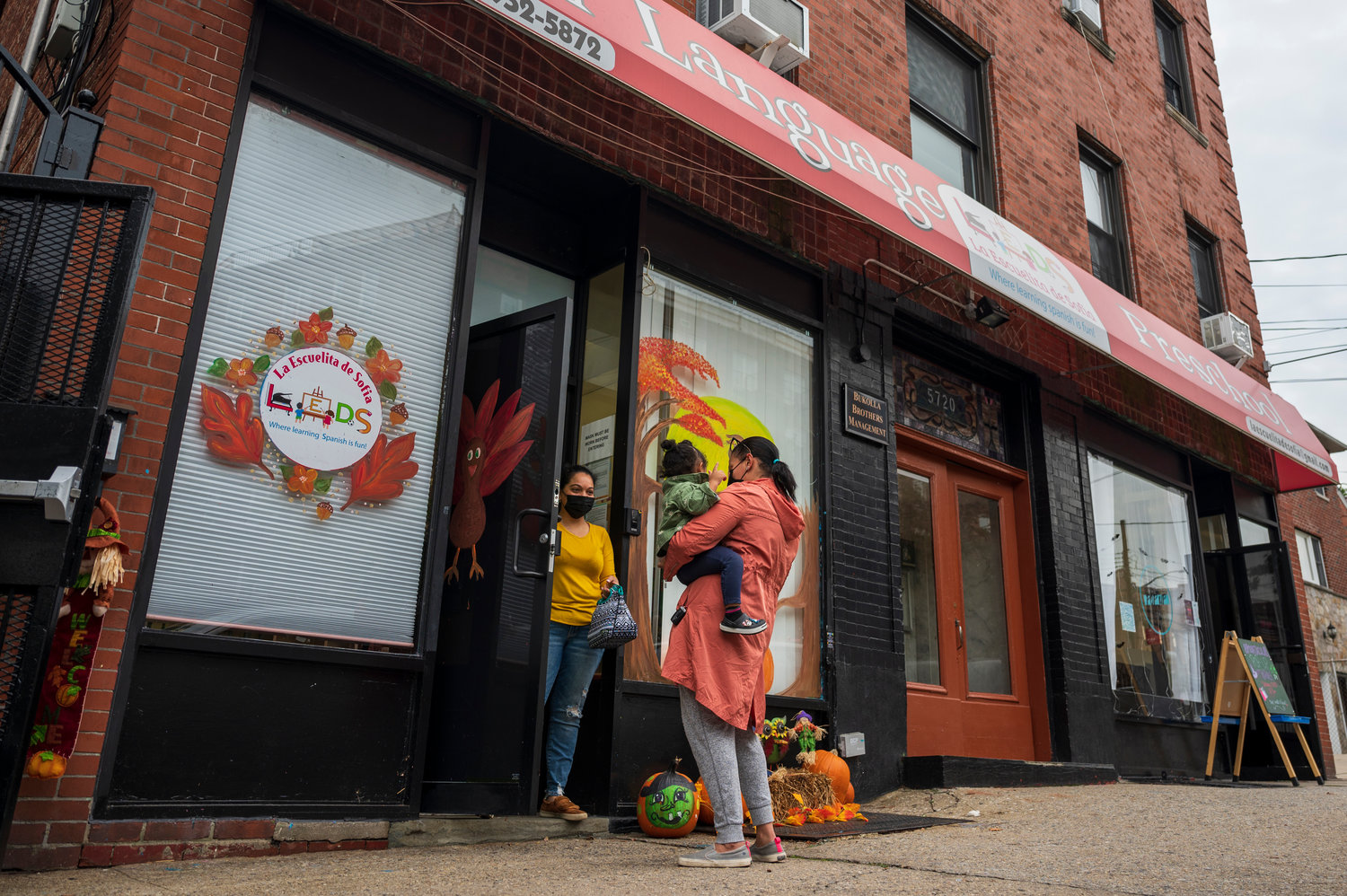 Julissa Freire, owner of La Escuelita de Sofia near Mosholu and Spencer avenues, is concerned the placement of a men’s homeless shelter in her North Riverdale neighborhood could convince parents to stop bringing their children to her preschool.
HIRAM ALEJANDRO DURÃN

Julissa Freire would be the first to tell you she’s as compassionate as a human being can be. But with the city’s plan to construct a homeless shelter near her North Riverdale preschool, Freire is simply torn.

“I want to help homeless people, and I believe that they should have a place to sleep and eat at night,” she said. “But I’m worried about the (location of the shelter) being so close to my business.”

That business is La Escuelita de Sofia, which sits on the corner of Spencer and Mosholu avenues — what Freire describes as the only dual-lingo school in the Bronx. She welcomes students between 2 and 8 who can expect to learn both English and Spanish through a variety of lessons and activities.

But that school could be threatened by plans to build a shelter for 130 homeless men at 6661 Broadway, just south of the Yonkers city line. And Freire is not alone in her sentiment — something she and a good number of people have already addressed publicly during at least one recent Community Board 8 committee meeting.

Freire isn’t necessarily against where the shelter is planned, but more who is expected to live inside. Unlike the family-oriented transitional facility at 5731 Broadway two miles south, this particular facility will cater only to single men — a particular demographic she believes could make her business vulnerable.

“If this were a family or domestic violence shelter, I would be all for it,” Freire said. “But a single men’s shelter that would house people who may have criminal backgrounds worries me.”

“You know, we have young kids here that we look after,” she said. “They’re the ones I’m worried about.”

But the proposed homeless shelter isn’t the only beef Freire has with the city. She recently applied for city funding to offer free universal pre-kindergarten at her school, but she was turned down.

“I’m disappointed that they couldn’t approve my (application) for universal pre-K, but they’re more than willing to approve one for a men’s shelter,” she said.

But Freire isn’t just a business owner in the North Riverdale neighborhood. She’s also a resident.

Freire and her husband moved into the community in 1998 with the hopes of establishing a better life for their two daughters.

The shelter has been cast as a North Riverdale issue, but its proposed location affects more than just this particular neighborhood — and even this particular city. It’s just a stone’s throw away from the line separating New York City from Westchester County and Yonkers. Some business owners there are also sounding off about its placement.

Deena Diaz feels like she may have more to lose than some of her neighbors.

Her Uptown Sports Complex sits near the would-be shelter, yet she has almost no say because this is a New York City issue, not a Yonkers one.

Diaz is in a unique position, fortunately, as her family lives in North Riverdale, giving her a stronger voice with city officials and the community board.

“All of our clients are predominantly from the Bronx,” Diaz said. “We don’t have many (members) from Yonkers, which is funny because we’re right on that border. We service mostly people from Riverdale.”

Like Freire, Diaz’s concerns lie heavily on what backgrounds the shelter residents may have, and if any of those backgrounds could pose any danger to the children who frequent her business.

The complex encompasses a training facility, hosting fitness classes for kids of all ages.

Drinkwater says no information on who might live there will be available for some time, since 6661 Broadway is not expected to open until late 2023, and selection of who will live there will take place much, much closer to that opening.

Since the coronavirus pandemic, Diaz says she’s already witnessed an influx of homeless people loitering in the area. The men’s shelter would create even bigger issues.

“We’re already dealing with that problem now, and I just feel like it’s definitely going to add to it,” she said. “We don’t know if these men have a record or what their status is.”

Some men Diaz believes are homeless already loiter at a nearby bodega next to the proposed site. She’s also seen some in Van Cortlandt Park, the northern tip which sits just across from the proposed 6661 Broadway site. Diaz fears adding a homeless shelter would just add to the number of people inside the park.

But not just more traffic in Vannie, Freire said, but also something that could make going there riskier for her young clientele.

“We always take our students on nature walks to the park when the weather permits it,” she said. “We’d be concerned about their safety and would be less likely to do that if the situation feels unsafe.”

Diaz says she recently had an encounter with one man at a West 251st Street gas station that left her unsettled.

“Me and my daughter were actually chased in the gas station the other day by a homeless man,” Diaz said. “He seemed to be completely deranged. He was banging on our car window and wouldn’t get out from the front of our car. I felt bad for him, but I was scared for my daughter’s safety.”

Diaz fears if the problem continues, her family will be forced to move away.

“This is supposed to be a really nice family-oriented neighborhood,” she said. “It’s just getting worse.”

While some experiencing homelessness do suffer from various forms of mental illness, most who seek shelter do not, city officials told the Daily News last spring.

Still, it’s something that frightens Freire the most — not mental illness, but instead neighbors and clients moving out of the neighborhood.

“If they put that shelter there, people won’t just stop sending their kids to my school, but families will leave the area,” she said. “Our biggest concerns are for our babies, and that’s what matters the most to us.”